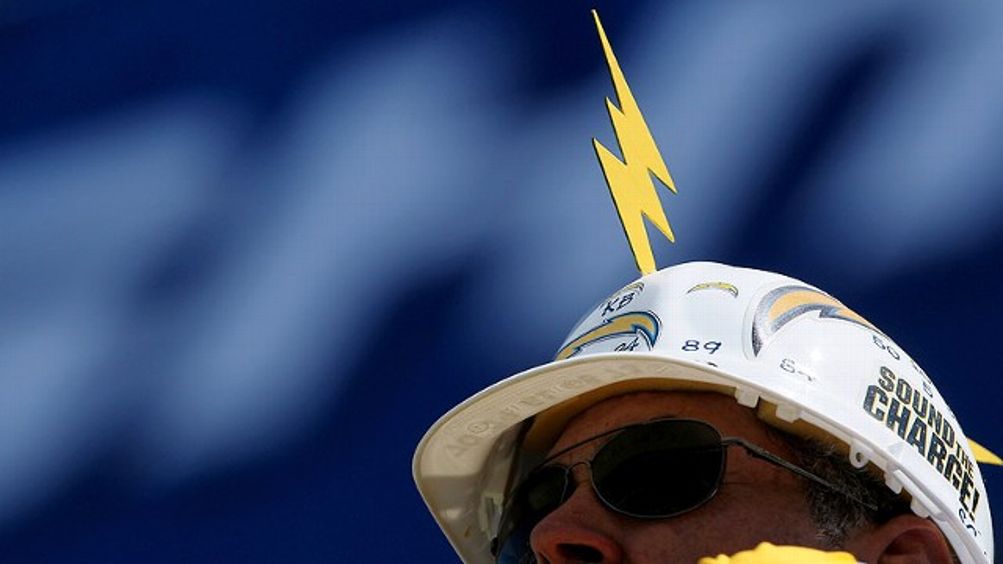 In the last 20 years, I have only missed seven Chargers games. I watch them every Sunday, and if the game is blacked out locally, I crowd around the radio like it’s 1944 and I’m listening to FDR give a speech about the Nazis. Five years ago, when I was waiting tables and barely making rent, I spent three hundred and thirty dollars on an authentic LaDainian Tomlinson jersey. I did that partially because I needed to swap out my Steve Foley jersey after he was shot by the cops, but also because I wanted to show my support for the team I loved. And after this season there is a decent chance that the team I have spent thousands of hours — and way too many dollars — supporting will leave San Diego.

The Chargers have been in San Diego since 1961, and in that time they’ve established themselves as the Nicolas Cage of the NFL: Every 10 years they seem to pull it together and have a decent showing, but mostly they’re just embarrassing to watch. But in the 1994-95 season, they made it all the way to the Super Bowl. Although my dad is from Kentucky, he is a Chargers fan. He moved to San Diego in 1971 and fell in love with the team. He won’t wear a jersey, and the first time he saw me in mine he said, “I would never wear a goddamn jersey that belongs to a grown man. That’s for children and the woman who is currently fucking that man.” But he never misses a game, and follows the team as closely as I do.

For Chargers fans like us, that ’94-95 Super Bowl run was a big one. I was 14 years old, and watching the Chargers was my favorite activity that didn’t require a box of tissues. My dad and I watched every playoff game in our living room, he sitting in his worn-out brown recliner in a gray sweatsuit, me sporting my Junior Seau T-shirt jersey on our brown couch. For the Super Bowl, we kept the same routine, in hopes the outcome would also be the same. It wasn’t. The San Francisco 49ers beat the hell out of the Chargers, 49-26. My father watched silently, and I tried to keep my reactions to screams and fist clenches, but early in the fourth quarter, when Steve Young tossed his record-setting sixth touchdown to a wide-open Jerry Rice, I leaped from my seat on the couch, ran up to a pillow that had fallen on the floor, and kicked it as hard as I could. The pillow ricocheted around the wooden walls of our small living room and landed on top of the mantle, where it knocked into my dad’s prized possession: a 50-year-old ceramic jug of Kentucky bourbon that had been handed down to him by his father. My dad had been saving that bourbon for an unspecified special occasion. A few years before, a friend had asked him if he’d had a drink from the bourbon on the night I was born, to mark the birth of his child. “Didn’t even think about it,” he said. “People shit out babies every goddamn second. That bourbon was crafted with love and patience.”

The look on my dad’s face was a look I’ve since seen on many of my friends who are parents. A look that says, “I am having serious doubts about my decision to have children.”

I watched in horror as that pillow knocked into the bottle, which started to wobble slowly toward the edge of the shelf, where it had sat for as long as I could remember. In what felt like slow-motion, I leaped over our coffee table toward the mantle, arms outstretched, but I was too late: It tumbled to the floor before my eyes, shattering into three large pieces, emptying all that precious brown liquid into our rug. In 20 seconds, it was as if it had never existed. I froze, then slowly turned around to look at my dad. The look on his face is a look I’ve since seen on many of my friends who are parents. A look that says, “I am having serious doubts about my decision to have children.” Then, before I could find the words to apologize, he got up and walked out the front door without saying a word. From our living room I saw him walk up the street and disappear into the darkness.

Four hours later, at around 10:30 p.m., I was brushing my teeth and getting ready for bed when I heard the front door open. A moment later, he appeared at the bathroom door, beads of sweat on his forehead.

“There is not a scale available with which I can accurately measure how much I want you to shut the fuck up right now, but trust me when I say it is in your best interests to do so,” he said calmly.

“Okay. I understand you love the Chargers. You root for them; you want them to win. It kills you when they lose. But let me tell you a little story. Back when I was practicing medicine in Oklahoma, there was a doc in obstetrics who used to like to go to titty bars. And there was this particular titty bar not too far from the hospital where he’d go every chance he got. And this was Oklahoma, which ain’t exactly the big leagues of titty bars. I shouldn’t say that, that’s rude. Anyhow, this doc, he got real sweet on one of the strippers there. And he started coming back from lunch and telling everybody how he was sure this girl was sweet on him too, and that she was telling him he was different than the other guys, and blahbitty fuckin’ blah. This goes on for a few months. Then, on Valentine’s Day, he shows up at the titty bar with a bunch of flowers to ask this stripper to be his girl or whatever. Guess what happened.”

“Not really, because he was a stupid sonofabitch. What he failed to recognize — that any sane human being would — is that a stripper is always gonna be just nice enough to you to keep you coming back, but at the end of the day, she doesn’t give a fuck about you. You’re just a hard-on she rubs up on for money. That’s her job. And guess what? That’s the same goddamn way the San Diego Chargers and any other team feels about you. So the next time you want to get up and kick something, remember this: Your favorite team don’t give a fuck about you, so why the hell should you let them ruin your day? Or, more important, destroy a sacred bottle of bourbon?”

I thought a moment. “What happened to that doctor?”

“He became the head of obstetrics. His name’s Hal Ashland.1 Good guy.”

Today, the Chargers are threatening to move to another city if they don’t get a new stadium. Fans in San Diego are calling radio shows and writing angry blog posts, saying that if the Chargers left they’d feel devastated and betrayed. And that behavior is no different than that of most sports fans around the country. Every time our favorite team does something selfish, for purely business reasons, we take it personally. Because we want to believe that they love us as much as we love them. But they don’t. They just rub up against whoever has the most money. So if we choose to be Hal Ashland, let’s stop getting surprised every time we get a beer bottle to the head.

Justin Halpern is the author of the no. 1 New York Times best-seller Sh*t My Dad Says. He is also partially responsible for the television show of the same name, which you probably hated. His second book, I Suck at Girls (on sale from It Books on May 15, 2012), is a trip through Halpern’s complete failures with the opposite sex. And yes, his dad is in it. He’s not stupid. Follow him on Twitter at @justin_halpern.