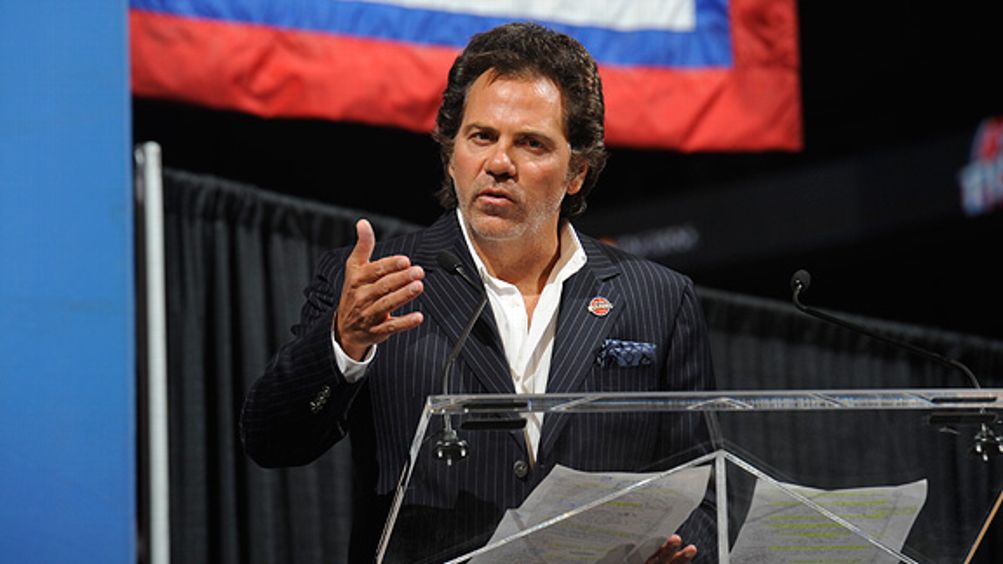 “The big difference between art and sports, of course, is that art collectors are honest about psychic benefits. They do not wake up one day, pretend that looking at a Van Gogh leaves them cold, and demand a $27 million refund from their art dealer. But that is exactly what the NBA owners are doing. They are indulging in the fantasy that what they run are ordinary businesses — when they never were. And they are asking us to believe that these ‘businesses’ lose money. But of course an owner is only losing money if he values the psychic benefits of owning an NBA franchise at zero — and if you value psychic benefits at zero, then you shouldn’t own an NBA franchise in the first place. You should sell your ‘business’ — at what is sure to be a healthy premium — to someone who actually likes basketball.”

“The story of Ric Flair was once about a college dropout who rose through the ranks of professional wrestling to become a legend. It was about his nickname, ‘The Nature Boy,’ and his signature figure four leglock, both lifted from an older wrestler named Buddy Rogers. It was about his multiple championships, his bleach-blond hair, his fast-talking patter (by his own reckoning, Flair was a ‘stylin’, profilin’, limousine-riding, jet-flying, kiss-stealing, wheelin’-n’-dealin’ son of a gun!’), and his signature, trademarked cry: ‘WOOO!’

“Today the story is about a man known in the court system as Richard Morgan Fliehr, 62, born in 1949 and adopted by parents who raised him in Minnesota. That’s what he was called this past April, when a judge ejected Fliehr from his Charlotte home because he couldn’t pay his rent. That’s what he was called in May, when he faced an arrest order for an unpaid $35,000 loan. That’s what he’s called on the paychecks from Total Nonstop Action, a second-tier outfit where he’s still compelled to perform despite suffering from alcoholic cardiomyopathy, and where almost everything he earns goes toward old debts: lawyers, ex-wives, the IRS, former business partners, and anyone who made the mistake of lending him money.”

“Over the years, many companies enlisted rappers to promote their products (Ludacris and Pepsi, Jay-Z and Heineken, Kanye and Absolut, Ice Cube and Coors) and as rappers have upped their business acumen, they also started to endorse their own products in commercials (Diddy and Ciroc, 50 Cent and Vitamin Water).

“Brands like Pepsi, Heineken, Absolute, Coors, Ciroc, and Vitamin Water have done great things to further merge the worlds of beverages and hip-hop, but when it really comes down to it, none of those silly companies matter. There are only two that deserve an unnecessarily long analysis of their contribution to pop culture.”

“You’ve recently started working on the new Judd Apatow film. How do Maude and Iris Apatow feel about you pretending to be their father again?
In the beginning they felt a little weird about it. I met them when they were very little, around Anchorman. And there was a scene we did for 40-Year-Old Virgin that was cut from the movie where Judd was carrying Iris, who was probably two or three at the time. In the electronics store where we worked there was a robot, and I was improvising and started yelling at her, ‘Don’t! You cannot touch this robot!’ She started crying, and ever since then I’ve been the mean guy who yells. She would laugh at some of my bullshit, but inevitably she’d creep back around to total judgment. Now that she’s eight, though, I hopefully have erased that trauma.”

“As a place to live, the Veer Towers are a gorgeous property. For less than the cost of most one-bedroom apartments in Boston, I have a place on the 33rd floor that looks over the Monte Carlo and Mandalay Bay, with the mountains of Vegas in the distance. I was lucky to get a place in the West property that faces away from the sister tower — according to residents who live in the section of the East tower that faces west, the building is subject to a loud, sustained whistling noise that occurs any time the desert wind whips past the building. This sound makes living in the apartment impossible and forces MGM, who still owns the building, to put any resident who complains in the adjacent Vdara Hotel & Spa for a free stay. The estimate I heard for how many times this has happened in 2011 was in the mid-20s.

“It’s terrible timing for most people, but it’s a great moment for me. I can rent at a fraction of what MGM expected the units to go for and live in the heart of the strip, with a two-minute tram ride taking me to the elite poker rooms and sportsbooks of Aria and the Bellagio. There are a half-dozen casinos within a short walk. It’s the epicenter of my Vegas experience, the control tower from which I will hand out money to casinos like a mobile ATM.”

“Q. Where would you set the over / under for the amount of oreos you can eat in 5 minutes?

Bakes: I’d be bad at Oreos, because I’m a twister by nature. So, I dunno, maybe 10? Mint Milanos on the other hand, or that nursery school snack-time staple, Keebler Fudge Stripes? The over/under on those would have to be denominated in packages. (1.5 and 1, respectively.) But the down-the-hatchiest cookie would have to be Chewy Chips Ahoy. Nuking four of them at a time on a plate in the microwave for 30 seconds is my strategic equivalent of a competitive eater soaking hot dog buns in water. Try it sometime! You can practically swallow all four at once without having to chew. Having only one microwave would certainly limit my consumption, but if multiple appliances were allowed there’s no doubt in my mind I could break 40.”

Never Been in a Riot

“In the face of alien invasion, it’s always the young who refuse to blink. They have yet to rationalize whether we are alone in the universe. They have no time for disbelief or worries about whether insurance covers for beached spacecraft. In the movies, they are the characters that most easily sympathize with the alien other, realizing that the adult world’s alarmist policy of shooting first and asking questions later might not be as mature as it seems — Iron Giant, E.T., or Flight of the Navigator come to mind. If anything, kid and alien usually end up arriving at the same conclusion: They are equally misunderstood. But in the case of the recent British sci-fi comedy Attack the Block, there is no room for sympathy, no reason for the kids to think that the aliens share anything in common with their grim lives beyond a propensity for disappearing into shadows. These kids have enough problems of their own: depressing public housing, official neglect, abusive police, absent parents, no future — and the only reprieve from all this comes in the form of spontaneous mayhem or blunted Xbox sessions. Where have I heard this one before?”

“The big thing to remember here is that the games are only six innings long, so there really isn’t a lull during the middle. Also, every now and then you get that rare moment when a 4-foot-9 kid steps into the batter’s box against a 6-foot, 165-pound kid who can throw almost 80 mph, and you realize that there’s a legitimate chance you are about to witness a manslaughter on live television. But more than anything else, what makes the games so entertaining is that the kids are all 12, which means that all of them are prone to a complete mental meltdown at any point.”

“You are not a respectable man, nor are you a monster. You’re a standard late-model male of the species, skillful at one niche enterprise and hapless when it comes to morality. You’re like so many of us — justifying transgressions committed in the name of profit, hoping the line between right and wrong is broad and smudgy and if you stay busy enough, you won’t have to ponder it. There are televangelists preying on our grandmothers and folks whose job it is to turn down health insurance claims or market cigarettes, so let us not convince ourselves that a cheating coach is some bloodthirsty demon who ought to be stoned to death on his way into an Outback Steakhouse. Nor, though, should we be unclear about the essence of your Ohio State run, Coach, now that it has come to an end. Now that a couple of months have passed. Now that the blame-Terrelle Pryor/isn’t-that-a-shame-about-good-old-Coach T crowd has quieted and come to terms with slogging through the upcoming season with a no-name, lame-duck head man and a quarterback who last year at this time was facing off against the defense of Huber Heights High.”