Fight of the Year?

The Decline of Horse Racing 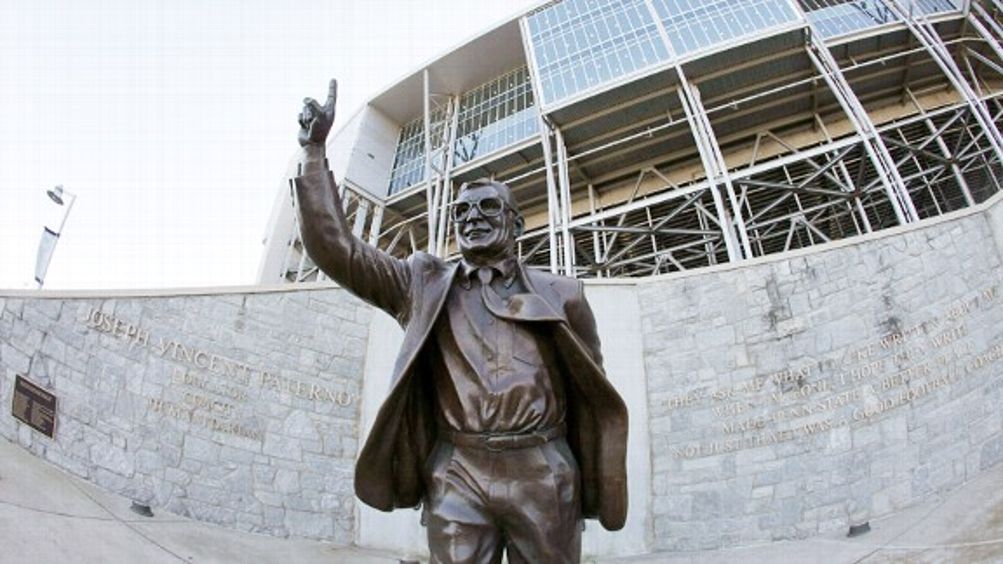 Growing Up Penn State ♦ The Culture of Unrest at Penn State

“I don’t know if there are any apt analogies to anything when it comes to this case, but this seems a little bit like our Len Bias moment at Penn State. Our leaders failed to cover, and while they deserve the benefit of due process, they deserve to be held accountable for whatever mistakes they made. If it means that this is how Joe Paterno goes out, then so be it; if it means that 30 years of my own memories of Penn State football are forever tarnished, then I will accept it in the name of finding some measure of justice. Every sane person I know agrees on this. It took Maryland the better part of two decades to regain its soul, and it will take us many years, as well, and in some way it will never be the same. We’ve come to terms with the corruptibility of the human soul in State College, and we’ve swept away the naïve notion that this place where we lived so quietly was different from the rest of America.

“I have two close friends, a husband and wife, both alums, who moved to State College from New York City a few years ago. They did this because they couldn’t afford to raise children in Manhattan, but they also did it because he couldn’t imagine a safer place to raise their kids than a little town in a valley situated three hours from everywhere. I don’t know what it feels like to grow up there now. I want these things to disappear from my consciousness, but they won’t. The place where I grew up is gone, and it’s not coming back.”

“High on the list of things I’ve been meaning to do since I moved to New York in 2004 is going up to a Columbia University football game. I blame myself for the failure to make this happen for seven years, but I will say it’s tough to find a wingman for a trip like that, and a solo mission to watch an Ivy League school with which I have absolutely no affiliation always felt like a bridge I didn’t want to cross. I also struggled, when raising the idea every year, to answer my wife’s fundamental question, ‘Why the hell am I going to sit in the cold to watch a football game between Columbia and Brown?’ This year, I stopped asking my wife. Instead, I found a wingman who does not ask the kind of questions that reduce a man’s long-held dreams to trivia. I invited my helpless 4-year-old daughter.

Welcome to the National Mailbag League

The Sports Guy dips into his inbox to find inspiration for making the rest of his Week 10 picks.

Fight of the Year?

Two takes on last Saturday’s bout in Cancun, and suggestions for how to improve boxing coverage.

Mark Titus presents his thoughts on the best (and worst) in the upcoming college basketball season.

“I’ve never understood why the people behind a show that remains, consistently, the most-watched non-sports telecast of the TV season feel compelled to behave as if they’re in free fall. Over the past 10 years, the Oscars have averaged 38.6 million viewers. To put that in context, it’s about twice as many people as the amount who watch TV’s most popular scripted show every week, and 10 million more people than the amount who watch an ‘event’ program like the American Idol finale. This year’s poorly received telecast was less than 2.5 percent below its past-decade average. Nevertheless, it was cause for alarm inside the Academy, which quickly went into ‘We have to make the show younger/hipper/funnier’ mode. Thus, Ratner.

“I’m all for a funny Oscars — nobody wants to watch James Franco glower at a prompter for three hours — but the current mindset of too many people in the Academy has nothing to do with making minor tweaks to a telecast that has now in its sixth decade of being a TV success. It stems from an almost willful refusal to acknowledge that the world has changed. In that thought-bubble, nothing exists but the glory years of the 1960s and 1970s, when there were only three networks and the audience for the Oscars routinely soared toward 50 million. The fact that the Oscars now exist in a fragmented TV universe with hundreds of options, the cluttering of the award season, the reality that movies themselves have lost their long-undisputed ownership of the cultural conversation and now share it with television, the reality that every broadcaster in the business now accepts a lower ceiling on the audience for an individual show — none of that is apparently supposed to affect the Academy Awards. Instead, the people who run the show seem to operate by one credo: The Oscars are broken. We must fix them.”

“Once upon a time, on a sweltering night in the Philippines, Muhammad Ali and Joe Frazier tried to murder each other. This happened legally, which somehow made it OK.

“See, they signed a contract to ‘fight’ each other in Manila. They wore padded gloves, trunks and sneakers so it looked like ‘boxing.’ They agreed to fight for 15 three-minute rounds with 60-second breaks in between. They gave a trained referee (Carlos Padilla) and two trusted trainers (Eddie Futch for Frazier, Angelo Dundee for Ali) the power to stop the ‘fight’ if it went too far. They confined themselves within a roped ring and fought furiously for 180 seconds at a time, only halting when they heard a bell … and even then, there were a couple of times when they just kept going. Thirteen times, they retreated to their respective corners, sat on stools directly facing one another, slurped water, gathered their breath for 60 seconds, stared across the ring at one another and thought about things like, ‘I have to kill him before he kills me.’ Each time, a bell would ring. They would stand up, walk toward the middle of the ring and try to murder each other again.”

“Today is Election Day across America, and as we celebrate it by muttering obscenities about petty municipal grievances or harassing our neighbors into voting yea or nay for pet causes, it’s worth remembering that even politicians are people, too. And there may have been no better reminder recently than the New York Times wedding section, where limousine liberals and knee-jerk conservatives alike can agree on one thing: One thousand bucks just for the tablecloths? What the …? And here they thought Congress was bad.

“In the hours leading to kickoff, the din never died down. With 30 minutes left on the clock, the building was already shaking. Bear Bryant’s voice and an epic score played behind a video of Alabama football’s greatest moments, and the reaction to each was as if they were happening in real time. As Nick Saban and his team gathered in the north end zone before taking the field, conversations had been reduced to futile shouts. The Alabama crowd had spent the last hour in a frenzy. The Game of the Century was theirs. And when ‘Thunderstruck’ began and the pom-poms moved in unison, and the Tide ran through the tunnel, it was hard to tell if the chills were from the night air of November in Alabama.”

Johnny Depp and the Too-Close Costar