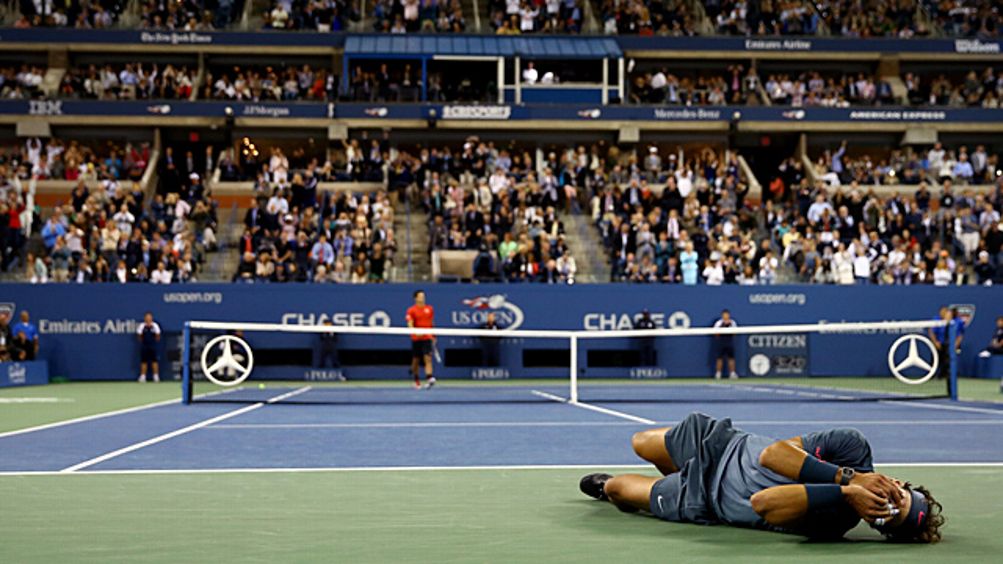 On the bus back from the U.S. Open men’s final I wound up sitting next to a photographer. It was past ten o’clock on Monday night, more than an hour after Rafa Nadal’s 6-2, 3-6, 6-4, 6-1 win over Novak Djokovic, and the tournament was in the early stages of dismantlement. Floodlights were coming down amid crews of men in jackets. Small knots of fans with giant novelty tennis balls were clustered here and there waiting for autographs. But most people were already gone, and most people who weren’t gone were going, streaming out toward the parking lots in groups, or in pairs, or alone. It was a cool night, no longer summer but not quite fall. You had the sense of people hanging back a little, walking slowly, talking about nothing, talking because they enjoyed talking, taking their time because something had happened to them here and before sunrise it would be gone.

Anyway, I got on the bus in the parking lot and sat down next to a photographer. I knew he was a photographer because he had his camera out and was clicking through photos on the view screen, a series of phenomenally sharp, bright close-ups of Nadal, whom he’d evidently been tracking all night. It was dark on the bus, and because I am by nature an eavesdropper and a spy, I spent the half-hour ride back to the Waldorf1 watching him examine his evening’s work. He would flip through five or six photos in a row and then zoom in on one, panning all over the screen, keying in on details he liked or wanted to edit. It was like watching a strobe movie of Nadal’s emotional arc during the match.

CLICK. Nadal hunched over and about to serve, his lip curled, his shoulder bulging like a bull’s.

CLICK. Nadal tossing the ball, his neck craned back, his torso wrung halfway around, his racket tucked behind his head, his jaw somehow unwired and hanging askew as if broken.

CLICK. Nadal obliterating the serve, bent halfway to the ground, his racket out ahead of him and his legs flying back, a demon trying to curtsy.

CLICK. Nadal finishing off a terrific, fierce scythe-cut of a topspin-heavy forehand, his forearm blocking the lower half of his face like a bandit’s mask, thunder radiating from his forehead.

And on and on, each picture more intense than the last: Nadal pumping his fist after rolling through the first set 6-2 (CLICK), Nadal scowling unimaginable death after losing a furious 54-shot rally in the second set, a point that meant he’d been broken for just the second time in his last 89 service games (CLICK), Nadal splayed on the court after falling in pursuit of a deep Djokovic shot, on his way to a 0-40 hole at one set apiece, barely clinging to the match (CLICK), Nadal on the ground, sobbing in relief and joy after Djokovic’s last forehand dipped into the net.

As a way of understanding the U.S. Open men’s final, this felt as true as any recap. It’s not that Djokovic didn’t factor in the match. For a long stretch during the second and third sets, he had control of it; you could have watched him moving Rafa around the court and concluded that he’d weathered his opponent’s strongest blast in the first set and somehow, as he often does, spun the compass so that the wind was blowing from his side. But from the beginning, the match was about Nadal — whether he could be beaten at all, whether this post-break, post-injury2 Rafa was vulnerable on a slow hard court, or vulnerable anywhere except on grass.3 Nadal was 16-1 (and is now 17-1) against top-10 players this year, had won nine (and has now won 10) titles, and had plowed through the field at Flushing like a sandworm through a settlement on Dune. When Nole beat him in seven tournament finals in 2011 and 2012, Rafa was arguably never more than 80 or 85 percent healthy. Then he took all that time off, stared at some sunsets, and came back from the sabbatical at around 700 percent.

From the crowd, the new Nadal-centric reality felt obvious, like one of the unacknowledged givens of the match. Most of the fans were cheering for Djokovic for most of the night, but — and this is a completely insupportable statement, but I had several drinks during the course of the evening, so you can trust my intuition here — there was an edgy logic behind the support. Djokovic-Nadal matches have a reputation for boiling over into five-set, five-hour classics; the crowd had come to see a classic Djokovic-Nadal match; with Rafa in Red Trajectory mode, the only way a classic Nadal-Djokovic match could happen was if Djokovic played insanely well. So they cheered for Djokovic, but it was really about Nadal.

And it really was, because for all that the four-set score line doesn’t suggest a vintage Rafa-Nole encounter, meaning a years-long, landscape-devastating World War I battle translated into an evening at the tennis club, the quality of play was at times just that high. It was just that Rafa wouldn’t let the classic happen. Djokovic committed a lot of unforced errors — 53 — but I didn’t think he seemed tired after his five-set win over Stanislas Wawrinka in the semifinals Saturday. He wasn’t sluggish; Nadal just kept punishing him with spin-maddened deep balls and dying-swan tight-angle drop shots, both hellish to return. So Djokovic took risks and missed a lot, often after long rallies that featured staggering tennis. And when it looked like he might have turned the match in his favor in the third set, when the crowd started settling in for a long, unpredictable night, Rafa scowled harder, crashed his eyebrows together, and announced the supremacy of his own will. CLICK. 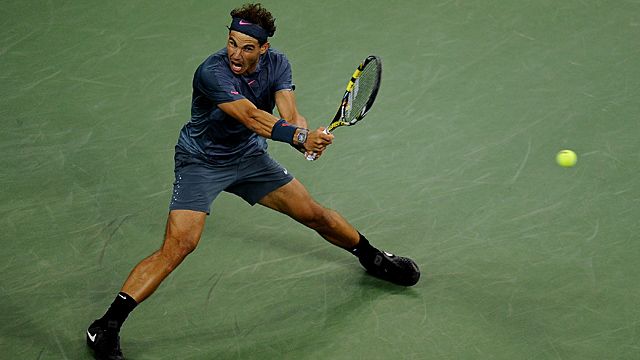 I was watching from halfway up in the stands. They were down below the lights, battering each other. The enthusiasm of the crowd was like something to do with gladiators. I don’t remember what set it was — the third, I think. I couldn’t stop thinking that this was it, this was the engine of New York, this was the thing I’d been fascinated and appalled by, the striving, the nightmare, all of it. Rafa and Nole had Come to New York to Make It, and they were being urged on and jeered by a stationary tornado of hair product and pastel shirts and tasteful, vintage-inspired tortoiseshell glasses. I realized when it rained at the Billie Jean King National Tennis Center, the rain sounded like thousands of tiny rats’ feet, and just at that moment (we were in a commercial break) the stadium’s two big screens were flashing through a montage of celebrities in the crowd — Justin Timberlake, Sarah Jessica Parker, Amanda Seyfried — and then suddenly there he was: Donald Trump, all blotches and outthrust lips. Hair like a bit of failed pastry. Two of him. A hundred times larger than life. The crowd booed, which only intensified his presence. I’d gotten over the subway plague days ago, but I half-expected him to raise a spider leg, unroll his gargantuan tongue, and lean out toward me …

And do you know what I thought of? I thought of Wawrinka. Unless you’re a fairly serious tennis fan (and/or reader of Grantland), you might not know who that is, or at least you probably haven’t watched many of his matches. He’s the second-most famous Swiss player in the world, a shade behind — OK, two shades behind — Roger Federer. Spent his whole career invisibly leeward of Federer. Kind of a kludgy, stolid guy with an earnest face. I watched his semifinal match against Djokovic with Grantland’s own Louisa Thomas, who also wrote about it.4 Anyway, as a historic figure Wawrinka is to Djokovic roughly what the guy at the back of the boat in Washington Crossing the Delaware is to Washington, but he’d been playing some of the best tennis of his life, and he took Djokovic to five sets, 2-6, 7-6(4), 3-6, 6-3, 6-4. There was this amazing moment in the fifth set that Louisa wrote about. Wawrinka was serving, and he somehow found himself in a 21-minute, 30-point game, a game in which he fought off five break points and blew seven deciding points of his own. Eons into this game, on what turned out to be the second-to-last point, Wawrinka, who was visibly exhausted and battling the no. 1 player in the world, turned to the fans and raised his arms, asking for support. The crowd, which like all U.S. Open and most tennis crowds knew a moment of inspiration when it saw one, went insane. Beyond insane. Twenty thousand people leaped to their feet. The sound was, like, pealing. Wawrinka responded with just a massive grin. If you weren’t there, I wish you had been; it was so beautiful.

Then Djokovic, in what may have been the most Djokovic-y moment of a long and Djokovic-y5 career, mimicked him, flapping his arms and demanding cheers of his own, which sort of enhanced and sort of spoiled everything. But for just the space of that one moment, the whole U.S. Open was concentrated on Arthur Ashe Stadium, and what existed between Wawrinka and the crowd, I’m sorry, was a very pure thing. And I realized during the final that this was the moment I will most remember from this U.S. Open. I’ll remember Nadal, sure, because Nadal is unforgettable and great and the most viscerally thrilling player in tennis. But more often, I will remember Wawrinka with his arms in the air and how this brief and fragile significance, something you almost can’t talk about, came for a while over everything. I don’t want a photo of it. I don’t want a trophy commemorating it. I want to know that we were there and that it happened.

Well, Wawrinka won the game and lost the match, and two nights later Nadal won the tournament. And we gathered our things and went down the stadium stairwells. We looked for reasons to stay. We stood around talking in the plazas near the big outdoor screens. We took our time walking, with the people we care about or the people we barely know, under a few visible stars, out toward the parking lots and the end of the U.S. Open.