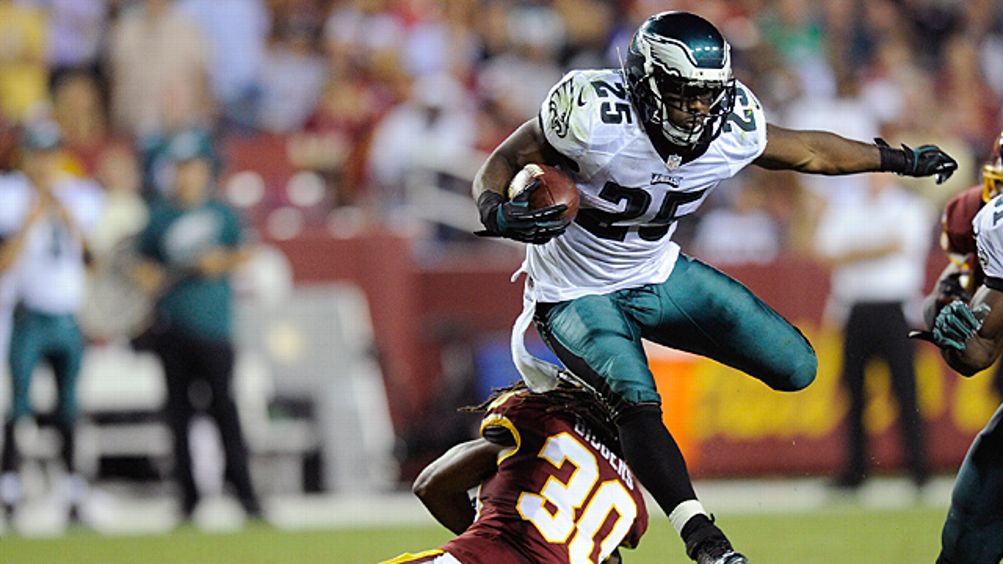 The National Football League devours phenomena. It grinds down any hint of the future into the undifferentiated powder of the present. I’m old enough to remember how the San Francisco 49ers revolutionized the game when Red Hickey livened up the 1960 season by trotting out the shotgun formation. The revolution — which was indeed televised, albeit in snowy black-and-white — didn’t last long; the Chicago Bears eventually blew up the future. Hickey abandoned the formation, which didn’t reappear in earnest until Tom Landry and the Dallas Cowboys refined it and made it part of their offense. In no other sport is the future so ephemeral, its promise so easily broken down into the present, and so quickly broken down further until it becomes the past. Basketball outgrows its fundamentals, one at a time, as the athletes get bigger and better. The most basic fundamental about football is destruction, so the devolutionary process goes on and on.

So, it is entirely possible that, by the fourth week of the season, what Chip Kelly has wrought with the Philadelphia Eagles may either already be edging into obsolescence, or strangled through by natural attrition of the game, as Kelly tries to make it work with whoever’s well down the depth chart behind LeSean McCoy and DeSean Jackson. But, for one night — the opening night of Monday Night Football — the Eagles got to go out there against the Washington Ethnic Degradations and reinvent the game … for a couple of hours, anyway.

“I told you before, we don’t count plays,” Kelly said, after his Eagles hung on to beat the Heedless Insults, 33-27, in a game in which the future became the past simply because the future found itself being slowed down. “That’s not the way we do things. We don’t count plays. We never have.

“It still is a game and I think sometimes we all take ourselves too seriously. You play football with a passion, and that’s what we did, and we had fun tonight.”

The stats were as gaudy as you might have expected. McCoy ran for 184 yards on 31 carries while Jackson caught seven balls for 104 yards. “A couple of their defensive guys were going down with cramps and things like that to try and slow us down,” Jackson said. “I’m not sure how serious their injuries were. As far as our offense, we were like, ‘C’mon. Let us keep going.'”

However, things did not start well for the Offense Of The Future. On the first Philadelphia drive, with the ball on the Washington 4-yard line, Michael Vick tried to swing the ball to McCoy, but he threw it backward, and it was tipped, and DeAngelo Hall was all the way down to the Philadelphia 30-yard line before anyone knew what was happening. It was the bad bounce to end all bad bounces. “It was a weird first half,” Kelly said.

What made the weird wonderful was the up-tempo offense that Kelly brought with him from Oregon. The Eagles ran 53 plays in the first half. They put up 322 yards to Washington’s 75 during the same span, and 21 first downs to Washington’s three. For a long stretch after the Inhumane Glibness scored its fluke opening touchdown, Philadelphia never appeared to run a play that didn’t work. The receivers were always open. The holes were always there. The Eagles might not have executed the plays well enough to finish them, but you could see the success of the design in all of them. Philadelphia led 26-7 at the half, and I will guarantee you that those 30 minutes will be all anyone talks about this week. But, even then, even as what looked innovative appeared to be succeeding wildly, you could sense the game’s great ability to level matters start to stir. Nothing new stays new very long here. 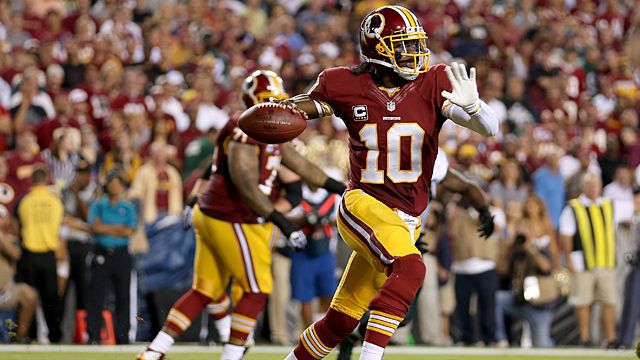 In fact, as long as we’re talking about innovation, Monday Night Football may have been the last great innovation in the history of the league. Not only did it create an authentic broadcasting sensation, but it also was critical in breaking open television programming to sports in prime time, which certainly came in handy when somebody came up with the crackpot idea of cable television, and then the even more insane notion of establishing a network that would show nothing but sports all day long. Thus, in a way, did MNF clear the way for ESPN, which now broadcasts it, and which also owns Grantland, now that I think about it.

Against all possible odds, and against the power of the great corporate leveling that marks the NFL off the field as sure as the physical damage levels it on the field, Monday Night Football maintained just a touch of the renegade for longer than anyone could have expected. I was at the last Monday-night game of the original ABC franchise, a forgettable contest between New England and the New York Jets that took place shortly after Christmas in 2005. From the press box, long after the game was over, you could see bonfires all throughout the parking lot. It looked like the noisy — and bibulous — bivouac of a defeated army, and people stayed for a very long time after the game was over, as though clinging to something they’d come to rely upon that was slipping away.

And now, as Ms. Mitchell put it several years after the 49ers abandoned the shotgun, it’s just another show. There’s Sunday Night Football, too, and Thursday Night Football. Last night, as the opening of the 44th season of MNF, the league put together a doubleheader, so the original charm of the thing has been hopelessly diluted. Players once gloried in the notion that they were on the field while all their peers were watching at home. The old MNF crew used to hit town like a carnival of dancing egos. Now, it’s just the same vast flotilla of trailers and satellite dishes rumbling down the interstate from one Megalon LLC Stadium to another, indistinguishable from the one that follows NASCAR, or the PGA Tour, or Taylor Swift. And they’re all pursuing the concept of outlaw ballyhoo that Monday Night Football made possible, but never quite catching up with it, because it is gone forever. The carnival is now an industry of spectacle, and that is guaranteed to slow everything down. 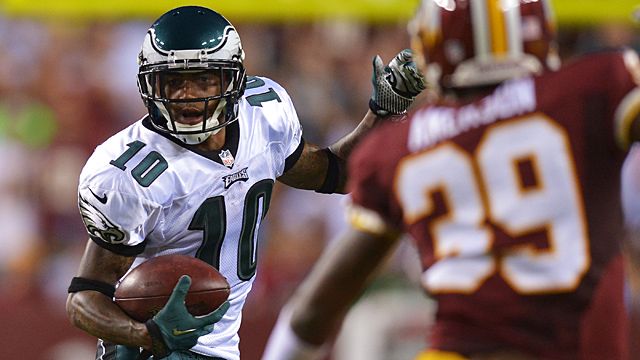 For all the first-half futurism, the game still came down to a moment when the football lay at the feet of one Philadelphia player while another Philadelphia player jumped on top of it, and him. Washington’s Robert Griffin III had just hit Leonard Hankerson with a 24-yard touchdown pass, bringing the Unconscionable Slurs to within a touchdown at 33-27 with 1:14 left to play. Kai Forbath then bounced the onside kick off of Jason Avant. For just a second the ball lay on the ground, and then Jake Knott fell on top of Avant and the ball, and then everybody from Washington fell on top of the both of them and the game was over.

The problem was that, after halftime, the Eagles tried to slow things down, and they found that, as counterintuitive as it might sound, it’s harder for a team built for speed to slow down than it is for a slow team to speed itself up. After all, every team, fast or slow, has a two-minute drill. The Eagles just start theirs at kickoff.

“That was a lot of fun for the first half and a lot of nerve-racking, bad play in the second half,” said Eagles center Jason Kelce. “Like I said, when we’re doing our tempo things, and the things we’ve been working on a lot, it went really well for us. But then we have to be able to close out the game. We have to be able to slow it down and trim some clock when we have that many points on the board. That’s really when we began to fall apart as a unit.”

By the end of the game, Washington was almost even with Philadelphia in first downs (25-26), and the margin in total yards had narrowed to 382-443. The game slowed, and Philadelphia was ill-prepared for it, and it looked like the future was being ground into the mundane present almost by the second. Kelce saw it. The system Kelly brought from Oregon is especially tough on offensive linemen, who don’t get any more time to rest than do the people on the other side of the ball whom the offense is designed to exhaust. The new offense, as much fun as it is, can sometimes idle too high for the people running it, and it can throw a rod if it’s throttled back too suddenly.

“For us, it’s harder to slow down right now,” Kelce said. “The reason for that is that we practice so much at a high tempo because that’s the way we plan to play for the most part. When we slow down and start huddling, that’s, generally speaking, when we start to make a few mistakes. It’s just the way we practice. The culture of our building is a fast-paced culture. We still got to be able to slow it down. That’s the way you close out games.”

Kelce knows. What they’re doing is still new, but he can see the leveling coming from just beyond the stadium lights, the future being ground into the unyielding present, one play at a time, and the choice always there, of either being absorbed into the game or destroyed by it. Nothing here new stays new for long.