The 13th Day of NBA Christmas 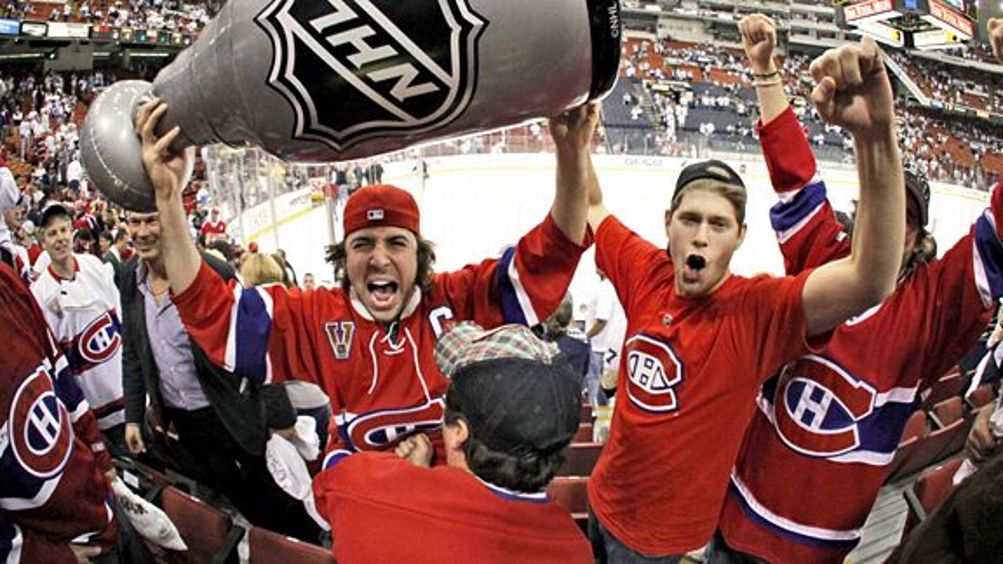 When the Montreal Canadiens fired coach Jacques Martin over the weekend, it wasn’t a shocking move. The team, floundering in last place in the Northeast Division, needed a shakeup. And while the Canadiens’ head-coaching job has long been a revolving door, they weren’t even the quickest in the league to send it spinning: Five other NHL teams had already canned their head coaches this season. The biggest surprise of Martin’s dismissal was that it hadn’t already happened, or that GM Pierre Gauthier hadn’t been let go also.

Nor was it particularly unusual to promote an assistant coach to the top job. Plenty of NHL coaches have gotten their big break that way, just as plenty of others have served their temporary roles as placeholder and stepped back down once a flashier or flat-out-better replacement was found.

But when the Canadiens announced that an assistant coach would be filling the void on an interim basis, the reaction in and around some parts of Montreal was trés scandalisé. That’s because Randy Cunneyworth ne parle pas Français.

Several angered nationalist groups called for boycotts of Molson products. Molson himself issued a statement: “Although our main priority remains to win hockey games and to keep improving as a team, it is obvious that the ability for the head coach to express himself in both French and English will be a very important factor in the selection of the permanent head coach.”

“The coach of the Canadiens is the most scrutinized personality in Quebec,” explained Journal de Montreal columnist Denis Poissant.1 “Even more than the prime minister, Celine Dion and even [Quebec City mayor] Regis Labeaume.”

Indeed, many in Montreal cherish the Canadiens as a cultural institution, a civic phenomenon, an entity that transcends plain old sports. Serge Savard, the legendary former GM, said that the team “belongs to the people.” And the vast majority of those people speak French … even if the overwhelming majority of the Canadiens roster does not.

But none of this is about the composition of this particular Montreal lineup, nor is it even about Cunneyworth. This is a broader issue, much the way the Canadiens are envisioned to be some broader symbol. This same conversation is had any and every time there’s a vacancy, whether it be on the coaching staff or on the depth chart. Greg Wyshynski recalls various outrages over non-Francophone captains, as well as “dozens of draft picks and other transactions made out of concern for culture.”

It’s fine to do things out of concern for culture, and the franchise is free to operate in whatever way it sees fit. But it can also be incredibly limiting. Travis Hughes surveyed the NHL landscape and found that the array of French-speaking coaches out there is pretty slim pickins. Of course, there is that one “perfect” solution, the one talked about incessantly whenever a coaching change appears imminent: Patrick Roy. Questioned this weekend about whether he’d consider it, he chose his words carefully. “Yes, it is certain I would listen if the Canadiens called,” he said (presumably in French).

For the time being, though, the Habs stand just three points out of the playoffs (although it’s a crowded and competitive three points). And Cunneyworth has a merciful bit of breathing room for the rest of 2011 — the Canadiens don’t play their next home game until January 4. He already seems to be getting in practice.

For those unilingual Anglophones among us, that meant: “I like Randy Cunneyworth, we just crossed and he said in French “Hi how are you?” with a smile.”

Last night we were treated to episode two of HBO’s 24/7 Flyers/Rangers: Road to the NHL Winter Classic. Watching the four-episode series is bittersweet, like reading a really great book: You rue your progress, wanting to read the next page but hating that it’ll put you that much closer to the end. I’m devastated that we’re already halfway there.

Peter Laviolette Would Be Great on HFBoards.com: One of my favorite small moments was coach Laviolette skating up alongside Scott Hartnell in practice to quietly congratulate him on his 200th goal, which led to this exchange regarding the coach’s own brief NHL career:

And Laviolette’s rally sputter of “Typical Montreal” to show his displeasure with the officials at the Bell Centre (this one in particular, I believe) was great for two reasons: (a) see above, and (b) taken in conjunction with his point-proving war of attrition with the Tampa Bay Lightning earlier this season, it painted a picture of an NHL coach who shares many a fed-up viewpoint with even the most passionate NHL fans among us. Now, let’s just hope that the show got some good footage last night of him shoving Dallas’ Steve Ott.

Officiating Is an Art, Not a Science: As they did last year, HBO included footage from inside the officials’ locker room, which yielded some F-bombs as well as some interesting chatter about the reasons (some sketchy) for some of their on-ice decisions. But nothing was as direct as the mics picking up one official skating alongside the Flyers’ Max Talbot, who had just been called for a penalty, and admitting it had been a bad call. “But sometimes you just accumulate things,” he said. Terry Gregson must have loved that.

Dan Girardi Has the Most Adorable Son of All Time: That is all.

Too Little on Pronger, Too Late on Giroux: For all the inside access we’re promised with the show, it seemed like kind of a cop-out to show the news that team captain Chris Pronger is out for the season with a concussion by just showing footage of a coach’s press conference, as Pierre LeBrun wrote. As for Claude Giroux, his return to the ice after a concussion of his own took place too late — last night as well — to work it into the show. A pity, because Giroux recorded a goal and three assists in the game. (Still, the scene of the team doctor asking him how his head felt during any texting was fun.)

Even When He’s Nice, John Tortorella Is Kind of a Hard-ass: Of course, the big lump-in-throat story was that of 10-year-old Liam, a huge Rangers fan with cerebral palsy who befriended John Tortorella at an MSG Garden of Dreams event. (I would do anything to read their text messages.) As “awww”-inducing as the Liam plot was, I had to laugh when Tortorella explained that following the kid’s hip surgery over the summer, the Rangers coach checked in with Liam frequently because he felt “he was getting a little lazy” with his rehab. Stop projecting your feelings about Wojtek Wolski onto innocent children, Torts!

The Show Has Become Self-Aware: Last week’s episode brought us the hilarity of Philadelphia goaltender Ilya Bryzgalov espousing on “the universe,” sacred tigers, and Chinese law. This week, Bryz walked into a team meal the way Forrest Gump boarded a bus: His teammates, having watched the program,2 had no desire to sit near him. (Jagr literally moved his tray to another table.) It was playful … but also kind of not? I dunno, I felt a little bit bad for Bryz, although I guess it’s hard to feel bad for someone who proceeds to happily sit down and begin comparing his “blue-eyed” Siberian husky to “basically a hot girl, man.”3 In another ouroboric scene, a pair of Flyers rookies lay in their hotel room and discussed how crazy it is to be on a team with Jagr. “He was on Sega Genesis,” said Zac Rinaldo. “I used to play that game religiously … I was Eric Lindros.”

My Parents Enjoyed the Show, Too: Because I am a person who writes things on the Internet for a living, it’s essentially part of my contract that I must at some point operate from my mother’s basement. And so, after calling my parents last week and informing them that in advance of my trip home for the holidays they needed to get HBO (with the same tone I once used to procure Trapper Keepers during back-to-school sales — Mo-om, I neeeeeed it! Loveyouthanks!), it was only fair to sit down and watch the show as a family. It was cool to see the things that they, the elusive “casual fans” whom 24/7 is designed to reach, latched onto. My dad was visibly amped to see John McEnroe playing guitar with Henrik Lundqvist, but he was a tough crowd: “They’re terrible,” he declared. And while I was busy giggling over inside-hockey things like Laviolette sputtering “typical Montreal,” my mother had her own take: “What!?” she exclaimed. “Didn’t the reffers see that?”

This Alex Burrows goal off a Sedin double-dangle is best summed up by the broadcaster’s Speed– like wonder: “Now … if you’re a defenseman, what do you do?” (Harrison Mooney answers that in his great breakdown of another twin-to-twin goal4 from the same game: “The secret to defending the Sedins is very simple: Don’t make any mistakes ever.”)

I also enjoyed this goal from Henrik Zetterberg, which was like watching a linebacker thread a needle on the first try.

Terry Pegula, the natural-gas magnate who poured megabucks into the Sabres franchise this offseason, has, like most moneymen these days, grown unhappy with the return on his investment. After his team fell 8-3 to the Penguins Saturday — a particularly annoying loss for the Pennsylvania native — a frustrated Pegula snarked to the press: “We saw some great goaltending tonight, didn’t we?” before suggesting that his daughter might have been better in net.5

A few days later, Sabres president Ted Black — “Pegula’s trusted lieutenant,” per ESPN.com’s Pierre LeBrun — unloaded on the team in his own way. “I don’t know of a coach that has done so much with so little for so long than Lindy [Ruff],” he said.

While the Sabres are only a point out of the playoffs, the vibe surrounding the franchise has become increasingly bleak. The team has battled injuries and been rattled by mediocre goaltending — the one thing most people assumed they could rely on.

Black continued, admitting: “I recognize the inherent cruelty of asking fans who have been through 40 winters of disappointment to have patience or to ask them to have a sense of hope and promise.”

Inherent cruelty? Winters of disappointment? Buffalo is starting to sound more like Westeros — a place where things end up badly for just about everyone involved.

This video isn’t quite the hockey trash talk that usually fills this section, but trust me: It’s so much better than that.

I might agree more
With this take on Milbury
Were game on L.I.