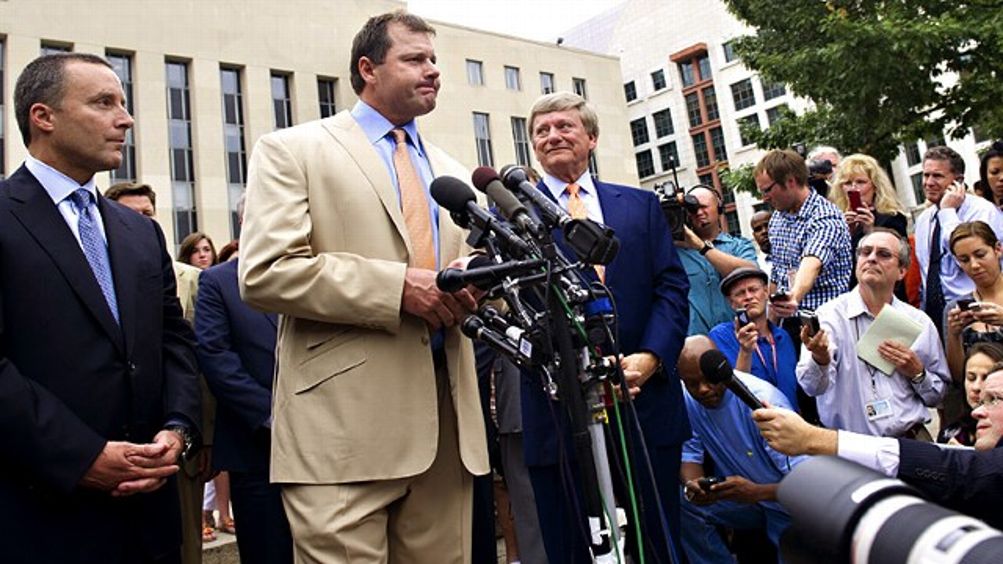 I would like a refund now, please, from the Department of Justice, perhaps something from petty cash, or even some loose AK’s like the ones the Department of Justice allowed to come into gun smugglers’ possession so they could be tracked into Mexican drug cartels, as though arming some of the world’s most dangerous criminals ever made sense beyond the boardrooms in D.C. It didn’t, and it made only marginally more sense to pursue Roger Clemens in court, not once, but twice.

It has not been a good spring before the bar for our federal gumshoes. First, down in North Carolina, former senator John Edwards walks in what may be the tawdriest personal scandal in our national politics since Alexander Hamilton was foozling that Reynolds woman. Edwards walked because the entire prosecution required that 12 simple souls understand the arcane subtleties of our campaign finance laws, something that most political lawyers understand only well enough to know how to break while staying out of the hoosegow. And now Clemens walks, a second time, because his entire prosecution required that a similar passel of simple souls understand the federal statute for lying to Congress, something that almost all of official Washington has chosen to ignore since half-past Iran-Contra. They both walk because, in a very real sense, they weren’t being tried for the crimes with which they were charged.

Both Edwards and Clemens were being tried on de facto charges of Being A Public Sleazeball. Edwards for siring a child with his flaky mistress while his wife was dying of cancer and he was running for president, and Clemens for apparently believing that he could get away with anything that boosted his performance on the field. Both prosecutions depended on testimony from people who clearly could have been brought before any bar on exactly the same charges. In Edwards’s case, it was Andrew Young, the world’s most lavishly appointed beard. With Clemens, it was the incredible circus parade of friends, hangers-on, and sidewalk pharmacists that the prosecution trotted through the courtroom. Now, people rarely commit crimes in front of massed children’s choirs, and you go to court with the witnesses you have. But if you know you’re trying someone for the crime of Being A Public Sleazeball, it helps if you have one or two witnesses on whom the jurors don’t feel automatically compelled to spit.

We all should have seen the Clemens verdict coming from the end of the first trial when, in a veritable tsunami of flop-sweat, the prosecution tried to introduce evidence that Judge Reggie Walton had already excluded. Now, whether or not you believe that the prosecution tanked their own case on purpose because they knew it had been rendered a loser — something I believe more strongly after yesterday’s developments than I did at the time — or whether you believe the government’s lawyers thought Walton had fallen into a coma and wouldn’t notice what they were doing, trying Clemens a second time has to be the biggest waste of federal criminal-justice resources since the last time Alberto Gonzales drew a paycheck. At least the prosecutors in the Edwards case have decided to cut their losses and go home.

(And, just as an aside, I think lying during government investigations is a serious damn business and ought to be prosecuted. It’s just that, what’s sauce for Elliott Abrams and Scooter Libby is sauce for a strutting gander like Clemens, and at least Clemens got a verdict that will stand. He won’t need a president to step in and pardon him on the way out the door. The charge has been hopelessly devalued over the past few decades, and convicting Roger Clemens while letting actual public servants get away with it wouldn’t have changed that.)

Après lui, of course, come the hysterics, the stalwart drug warriors who have fashioned high dudgeon into profitable careers fighting what my friend Scott Lemieux, of the Lawyers, Guns, and Money blog, calls “The War On (Some Classes of People Who Use Some) Drugs.” The anti-drug enforcement complex — which was born in the drug frenzies of the 1980s, but has its deepest roots in the racially compromised anti-drug campaigns that began in the 1920s — found its way into sports through the current hand-wringing about PEDs, as though every drug with which sports have acclimated themselves doesn’t “enhance” performance in some way. I don’t know what’s funnier — the fact that it seems to have dawned suddenly on the drug warriors and their media enablers that the great unwashed masses out there simply don’t give a damn about their grand crusade, or the fact that it seems to have dawned suddenly on those same people that really rich guys can afford really good lawyers.

Let’s look at the scoreboard, shall we? In the two highest-profile cases brought since baseball lost its mind on this issue, the prosecution has managed to convict Barry Bonds on the most minor charge brought against him, and it has managed to produce in the case of Roger Clemens one of the most humiliating mistrials in the history of Western jurisprudence and an even more embarrassing outright loss. Is it that unreasonable to assume that, once you get the Great Steroid Hunt in front of a jury of ordinary people, those people shrug and wonder what all the fuss was about?

And now, all they have to hang their hat on is the hope that the “truth” will come out in a defamation suit brought against Clemens by Brian McNamee, whom the federal jurors looked at as though they’d picked him up on their shoes when they entered court that morning. Here is your latest shining knight, kids, the man who allegedly injected Debbie Clemens with HGH, and who would have confessed to injecting the Lindbergh baby with Dianabol if the feds wanted him to do so, suing now, hilariously, to get his reputation back. McNamee actually may win; the standard of proof is much lower in this case than it was in the trial just concluded. But, mother of mercy, is that the golden triumph of our moral crusade? It isn’t exactly retaking Jerusalem. It’s more like conquering a goat cart outside of Acre.

In our drug wars, all damage is collateral damage. We trash civil liberties, abuse prosecutorial discretion, countenance hopeless grandstanding among our political elites, and endow our judicial process with the essential — and extraordinarily un-American — dynamics of the witch hunt and the show trial. It was the former that ensnared Clemens in a perjury trap, and it was the latter in which the matter was adjudicated. The government brought this case because it needed a high-profile win to justify all the money and time it has wasted chasing everyone in baseball who ever looked sideways at a hypodermic needle. Off on the sidelines, the anti-drug industrial complex stood up and cheered, when it wasn’t spinning the old drug-warrior boogedy-boogedy that is its stock in trade every time drugs make the country crazy again. I listen these days to what comes out of, say, the United States Anti-Doping Agency and all I hear is Mel Brooks as the cross-eyed governor William J. LePetomaine from Blazing Saddles.

“We’ve got to protect our phony-baloney jobs, gentlemen.”

It appears now that the next target is going to be Lance Armstrong, whom the anti-drug snoops have had in their sights for a while now. Here’s a suggestion, radical though it may be:

If you bring people to the bar on charges of Being A Public Sleazeball, your first obligation is to realize that, for most people, the defendants stand convicted of that charge already.

Don’t pursue “the case.” Don’t cover “the case” without covering all of “the case,” including a proper skepticism toward the motives of those bringing it. Don’t take any leak about “the case” that comes from the people pursuing it without about a ton of salt. Don’t be an unthinking part of the mechanism of control, which is all this whole business has been about in the first place. Unleash your inner libertarian. Understand that, dammit, science marches on and that, someday very soon, someone’s going to invent a PED that works very well without even the hint of harmful side effect with which everyone can justify their moral outrage when they lose their, well, stuff in the public prints. Where do we go then? Do we argue that it is simply a priori immoral to use any drug to make your performance better when we long ago made peace with the fact that you can inject yourself with nine kinds of painkillers to make your performance possible? The horse has been out of the barn on that argument for more than 50 years.

(In fact, one of the only things Clemens actually admitted to shooting up was lidocaine because, as we know, it is very moral to deaden the pain of your injuries so they can get worse as you play without your noticing it. Generations of crippled NFL players will attest to the essential ethics of that.)

The system, as it happens, worked in this case, just as it worked down in North Carolina for John Edwards. If you bring people to the bar on charges of Being A Public Sleazeball, your first obligation is to realize that, for most people, the defendants stand convicted of that charge already. You make the actual law look redundant and foolish, and you end up convicting yourselves of that. You turn the justice system into a puppet show.