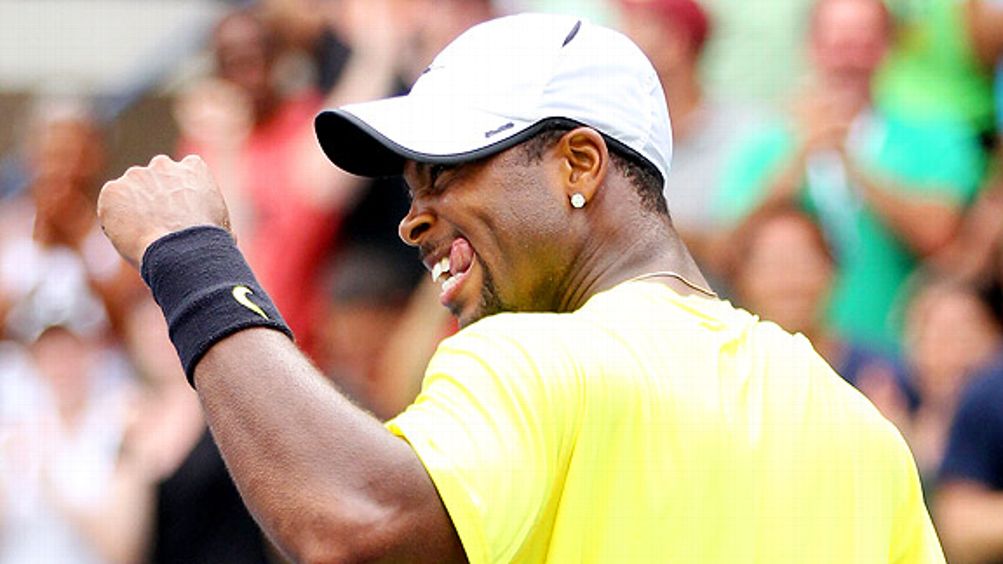 Even if you’re not a tennis fan, you’ve probably heard about Donald Young. He was the youngest winner of a junior grand slam, a former junior world no. 1. He was the phenom, the kid with the big Nike contract before he could drive, the Future of American Tennis, the men’s answer to the Williams sisters, the lefty from the South Side of Chicago who had caught the eye of Agassi’s coach, the Next Big Thing who, at the age of 10, impressed John McEnroe with his incredible hands. Young was also a cautionary tale — the brash kid who “had too much too early” and brought attention to himself in unwelcome and regrettable ways, most notably cussing out the United States Tennis Association on Twitter a few months ago. But on Sunday, Donald Young beat Juan Ignacio Chela in straight sets. Now the excited chatter, in a tournament that has been decidedly short of excitement, is that Young is living up to the hype.

But the hype around Young predicted that he’d one day be a championship-level player. This week marks the first time he’s ever made it past the third round of a Grand Slam tournament. Jim Courier once said that, at 15 years old, Young was part of a rare pedigree of “obvious bets.” Presumably, Courier was betting on more than Young’s reaching the round of 16.

When the tennis establishment talks about the 22-year-old now, it suggests that top 20 would be a plausible and happy outcome. Far be it for me to sneeze at being the top 20 in the world at anything. But it’s not the stuff of an Ashe or a Sampras. Donald Young was supposed to be one of them.

What he might be, though, is a star. Someone who makes you stop and watch. And, when you assess the landscape of tennis, that might just be enough for Donald Young, because tennis has a star problem.

Tennis thrives and falters according to its personalities, its stars. It’s a beautiful game, sometimes astonishingly so, and it’s possible just to appreciate the geometry and the physics, the terrific movement of the ball. But people root for people. If sports are substitutes for religious worship, tennis offers a lot in the way of idolatry.

Especially watching on television. It’s true that in a lot of ways watching a match is a much better experience in person, that you can see the way the ball (and the players) move in a way that you just can’t on TV. You can appreciate the power and the angles, hear the soles of shoes skidding on the courts. There is nothing like the energy of being inside Ashe during a night match at the U.S. Open or happening on a top player on a practice court or having Ivo Karlovic serve toward your head as you sit at knee level in the front row of Court 17. (I flinched every time.) But a camera can train on the face (not to mention legs and other assets). It can emphasize the emotional arc of a match. It can really make you care about who’s playing — not only how they’re playing but who they are.

The heroes of tennis are not always the most skilled players. Martina Hingis dominated during her time but was not a star. Lindsay Davenport was one of the best of her era and American to boot, but not a star. (Relatedly, was she wearing a muumuu while behind the anchor desk on Sunday night?) When you consider the stars of yesteryear — McEnroe, Borg, Connors, Evert, Ashe, Billie Jean King, Navratilova, Sampras, and so on &#8212 some were assholes and some were model citizens, but there was no denying their dynamism, the way they commanded both the court and the camera.

When people wonder where all the Americans are, what they’re really asking is where the stars are. There are a number of solid American men and women, and that was true even before a run of upsets by several of them sparked talk of a “resurgence.”

The thing is that the American players don’t seem to want the spotlight. Andy Roddick still does, but more and more people are having trouble buying it eight years after he won his only major, not least because he can seem bitter and entitled. Mardy Fish is the top American, but he’s very open about not wanting to be a star. When he supplanted Roddick as the United States’ top-ranked player, he demurred, “You can put his career on top of mine about six times. He’s always going to be the top dog in my generation.” Fish practically applauds his opponents when they hit winners. When he defeated Kevin Anderson at Louis Armstrong Stadium, the no. 2 court, he told the crowd he always requests playing there. In a way this is understandable. If you could have a nice career, make it into the top 10, and earn heaps of money doing what you love, why not just enjoy it? The spotlight can be harsh. Even if he won the Australian Open this winter, could you imagine Mardy Fish as anything but a nice, really successful guy? John Isner is a real threat, but he’s still known as the guy who won that long match at Wimbledon, and there’s just something alarmingly … tall about him. It’s like his personality disappears behind his size. James Blake is still slightly star-ish during the U.S. Open, capable of wowing a crowd with a spectacular shot (like this one!), but he’s no longer a threat to make a deep run. Ryan Harrison still seems one temper tantrum away from being sent to his room. Alex Bogomolov has his own incredible backstory, but I’m always confusing him with Alexandr Dolgopolov, which is not a good sign.

Donald Young is different. The story of his promise — the tennis-loving parents, the atmospheric early rise and subsequent unmet expectations, the Twitter outburst, the reemergence at this year’s Open, including two upsets of senior players — is told in hundreds of places elsewhere. (To get a glimpse of the darkest days, read Paul Wachter’s 2007 profile in the New York Times Magazine.) It’s a great, simple story. What is even more incredible is that people still want for him, so badly, to be someone they want to watch &#8212 one sure route to stardom, as Michael Vick proved last year, is the path of redemption.

Young was rewarded early, and then punished. Some of the backlash he’ll admit he deserved. “I felt I didn’t need to work as hard as other people,” he said the other day. But for now at least, that’s changed. Not everything has. He’s still got a temper, he’s still a little edgy. He still promises to open up the game like the Williams sisters did. He still wears his cap skewed. He is still losing at challenger tournaments. But now he’s working for position, and if there’s anything that’s more appealing than a prodigy, it’s a prodigy who makes the most of a second chance. He almost quit tennis, but he’s still playing. He’s still someone you want to watch.

To his immense credit, Young is being circumspect about his future, even if others are anointing him once more. To hear him tell it after beating Chela in the third round, he knows he’s got a long way to go. He’s just relieved not to be losing so much, to get to play another day. “It wasn’t that I didn’t love tennis,” he said about his lowest moments, “I just hated losing.”

His words made me think of another tennis comeback kid, Jennifer Capriati, who declared herself “sick of losing” after falling to no. 267. She went on to win three Grand Slam titles.

Losing wasn’t the worst problem Capriati faced, and winning was no solution. By the age of 17, she’d had two stints in drug rehab and was hospitalized last year after an overdose. People with great stories don’t always have great lives. What we want usually has more to do with what’s best for us than what’s best for them. Of course I want Young to be a star, and I think tennis fans — sports fans — are right to want that, too. He has the potential to draw new people to the game, to make the sport bigger. And he has the potential to be such a fantastic story. But I also think he’ll be lucky if his story is half as good as Capriati’s — or half as bad.