Welcome Back to the Mailbag 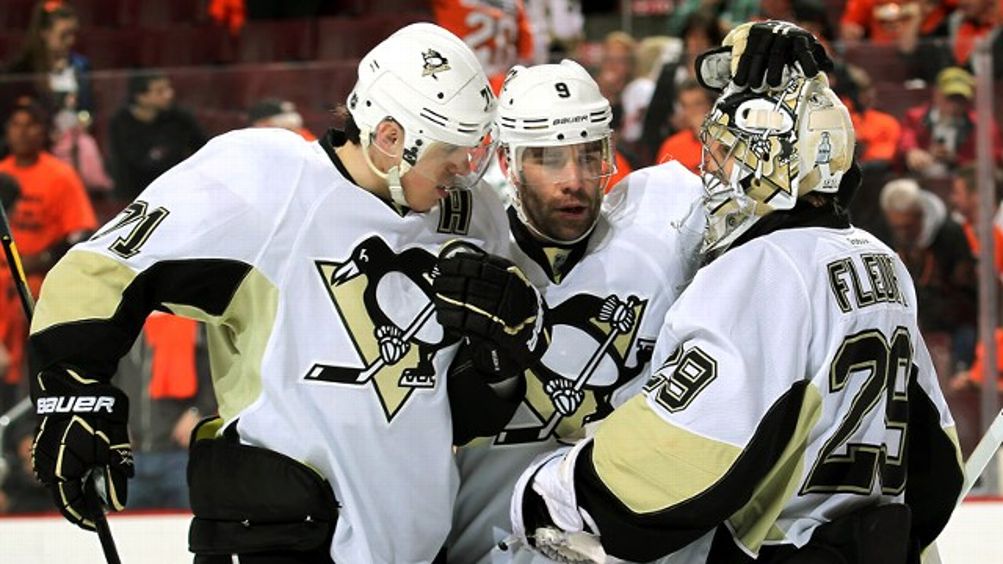 Even a dead cat will bounce if it falls from a great enough height, as the (macabre) saying goes. The dead-cat bounce is a concept that has become familiar financial shorthand for a brief recovery in otherwise dismal times. It’s a darling of pessimists: There’s no light at the end of the tunnel, no turning of a corner, nor any promising “green shoots” poking hopefully upward. There’s just brutal bag-of-bones physics at play, if a little bit too vividly so. It’s a phrase that is said to have originated out of Southeast Asia in the mid-’80s following massive declines in the Singaporean and Malaysian stock markets: When the indexes began to rise modestly, no one was fooled.

On Wednesday night, two teams whose stocks have taken a major beating of late, the Pittsburgh Penguins and the Vancouver Canucks, both staged respectable rallies. The Penguins, in a fitting chapter to their madcap (and just generally mad) series against the Flyers, netted a gaudy 10 goals in their 10-3 win over Philly. The Vancouver Canucks, aided by the return of Daniel Sedin, started to look a little bit more like their old offensive selves as they pulled out a 3-1 win over the L.A. Kings.

For the Penguins and Canucks, who had both trailed by an entirely unexpected three games to love in their respective first-round series, the wins allowed a reprieve for at least a few more days.1 But will either team really recover? “Don’t confuse that bounce with renewed life,” warned oil broker Raymond DeVoe Jr. back in 1986. “It is still a dead cat.” On Wednesday night during the Penguins-Flyers game, Yahoo!’s Greg Wyshynski had a similar message. “This game = Detroit routing SJ 7-1 in Game 4 of the 2010 semifinals,” he tweeted. “SJS closed it out in 5.”

While it’s a well-worn cliche to “take it one game at a time,” it’s easy to see what a powerful line of logic that can actually be in cases like these. It’s tremendously difficult to come back from down 3-0 in a series — it’s only been done three times in the NHL2 — but coming back from down 3-1 is a whole different matter.

Think of it this way: Pittsburgh now returns home for Game 5. If they win, now it’s 3-2 and the pressure’s on Philly. (Everyone’s been able to overlook Ilya Bryzgalov’s mediocrity as long as the Flyers have been winning, but that’s bound not to last.) Let’s say Game 6 is a close one, and let’s say the Penguins eke it out somehow — maybe Malkin, who finally scored some goals last night, is back in form. Now it’s 3-3 and heading back to Pittsburgh. Sure, the Flyers have owned the Pens in Consol Energy Center lately, but at this theoretical point they also would have just lost three straight and be on the verge of an epic collapse. On whom would you bet in Game 7?

Of course, there’s a simpler scenario, a much shorter distance between the two points: The Flyers (or, out west, the Kings) could (and probably will) manage to win just a measly one of their next three games, putting an end to their opponent’s attempted recovery right … meow.

Another day, another disciplinary hearing. This week, several rule-breaking players have learned their fates — one game off for the Caps’ Nicklas Backstrom here and the Pens’ James Neal there; four games for Pittsburgh’s Arron Asham, three for Chicago’s Andrew Shaw — while others dumbly continued to leave their feet. The Phoenix Coyotes’ Raffi Torres’s ferocious hit Tuesday night on the Blackhawks’ Marian Hossa resulted in Hossa being taken off the ice on a stretcher. It is expected that Torres will be given a significant suspension.

Coyotes GM Don Maloney, though, found the reaction overblown. “You would think Raffi murdered a bus load of children the way he’s portrayed here in Chicago,” he said (forever destroying the Google reputation of the “Baby Beluga” singer). Phoenix coach Dave Tippett chose to use the tried-and-true method of obfuscation through comparison. “I don’t think there was a malicious intent like some of the cross-checks to the face, or [Duncan] Keith’s elbow a few weeks ago on [Daniel] Sedin,” he said. Ray Whitney also turned the conversation back on Chicago: “We would probably be equally upset if our guy was knocked out of the game like [Hossa],” he said. “That’s unfortunate that he got injured. We certainly don’t want to see that. I can understand their frustration, as they can probably understand ours when our most valuable player [goaltender Mike Smith] gets hit in the jaw.”

And round and round we go. Every time there’s a questionable hit, everyone has the same answers. If you’re the hitter or his teammates, it was a hockey play that looks much worse in slow motion than it actually was, and was not nearly as dirty as fill-in-the-blank other hit from last week/month/season. If you’re the guy who got leveled, or members of his organization, then it was a disgraceful cheap shot from a notoriously dirty player, exactly the type of play and person that everyone wants to remove from the game. The problem with this binary formulation is that it ensures that pretty much everyone always sounds like a hypocrite at all times.

The identification and regulation of illegal hits and other bad contact ought to be a collaborative effort, one forged through leaguewide diplomacy, but instead it’s become something that feels more like a war. “That’s not hockey to me,” Jonathan Toews said of Torres’s hit, adding that Torres feels “no remorse at all.” It all starts, of course, with Brendan Shanahan’s unenviable position; while the VP of player safety has gotten increasingly (and necessarily) tougher over the last week, it’s impossible to know if his decisions constitute a temporary posture or a lasting precedent. But if changes are to be made, they’ll have to come from the jury of peers, not just the judge.

Even players who openly speak out in favor of harsher punishment find that it’s hard to get together a critical mass. The St. Louis Blues’ Andy McDonald, who told Pierre LeBrun that “guys are certainly not respecting each other on the ice,” feels that suspensions in the double digits would probably be the only real deterrent. But he said that it was nevertheless difficult to get players on the same page. “We need to come together as a group and decide, are we going to continue down this road and have health problems still 5-10 years from now?” he asked. “Or are we going to make a concentrated effort to get together and stop this?”

Lighting the Lamp: The Last Couple of Days’ Sickest Snipes

I refuse to include any of the goals from Pittsburgh-Philadelphia, because let’s face it: They’re devalued currency. That series might as well be the Weimar Republic. Like, Jordan Staal got a hat trick Wednesday night, but what does that even mean anymore?

So instead, here’s a goal from the lowest-scoring series of all, Boston-Washington, which through three games stands at a cumulative 6-5 for the Bruins. (The Flyers, meanwhile, have a 23-22 lead on the Penguins through four.) An alley-oop to Ovechkin? I’ll always approve.

And in honor of the return of Daniel,3 who had been out since March 21 with a concussion, here’s the Sediniest possible series of events from Game 3.

There’s the initial evasion, the between-the-legs pass, the spinorama pass, the shot, the shelved rebound, the awkward celebration … this had it all.

Piling On the Pylons: The Last Couple of Days’ Worst Performers

The Ottawa Senators have held a lead for precisely zero minutes and zero seconds during their four playoff games this past week against the New York Rangers. And yet, thanks to a pair of game-winning overtime goals by the Senators, the two teams will head back to New York for Game 5 with the series split at 2-2.

This hadn’t seemed likely early in Game 4, when a chip-in by Ryan Callahan gave the Rangers a 2-0 lead (both on power play goals) just 6:10 into the game. But the Senators, buoyed by a 33-save performance in net by Craig Anderson, responded in the second period to tie up the game, and Kyle Turris’s guided missile at 2:42 into overtime gave the Rangers their seventh straight playoff overtime loss. That’s just … yikes.

It wasn’t the first time the Rangers have had trouble protecting a lead this postseason. In Game 1, their 4-0 cushion was sliced in half by the Senators late in the third period. In Game 2, Ottawa tied the game twice in regulation — including a goal by Nick Foligno with less than five minutes to play — and then scored shortly into OT. And in Game 4, the Senators did it again.

Not that the Rangers have been the only ones to let such opportunities slip away. On Tuesday, the New Jersey Devils went up by a score of 3-0 to the delight of their adoring home crowd — and then handled the lead like a hot potato, giving up two power play goals before the first intermission alone. The Panthers netted two more unanswered in the second period and took the game 4-3. (The Devils had almost squandered a 3-0 lead in Game 1, but held on to win 3-2.)

Twice in their first two meetings, the Phoenix Coyotes let the Chicago Blackhawks score in the final seconds to tie things up. And of course, there’s Penguins-Flyers, a series that has turned the concept of “score early and often” into some sort of twisted curse. It all began with Game 1, in which Pittsburgh went up 3-0 in the first period and ultimately lost 4-3 in overtime.4 Since then, all four contests have been won by the team that gave up the first goal.

“At times, it’s like nobody wants to win the game,” said Pittsburgh’s Brooks Orpik. “It’s just back and forth, trading goals.”

I wrote about some of the better taunts earlier this week — the crying and the cocaine — but in the last few days a new entrant has appeared: the Philadelphia Daily News.

I moved to California from New York last July, and the three things I miss the most are, in no order: good pizza, plentiful cabs, and the daily tabloids. And while nothing will ever beat the New York Post, Philly’s Daily News certainly has all the right pieces in place with this one: the mostly nonsensical concept, the lazy Photoshop (the tail!), the memorable catchphrase, and the vague menace of the chosen background, which includes, yes, a glove just ripe for the stick-pushing. If the “sixth borough” were eligible for The Front, I suspect this issue would be the front-runner.

The kings of the world
Which one is Leonardo?
They’ll never let go.