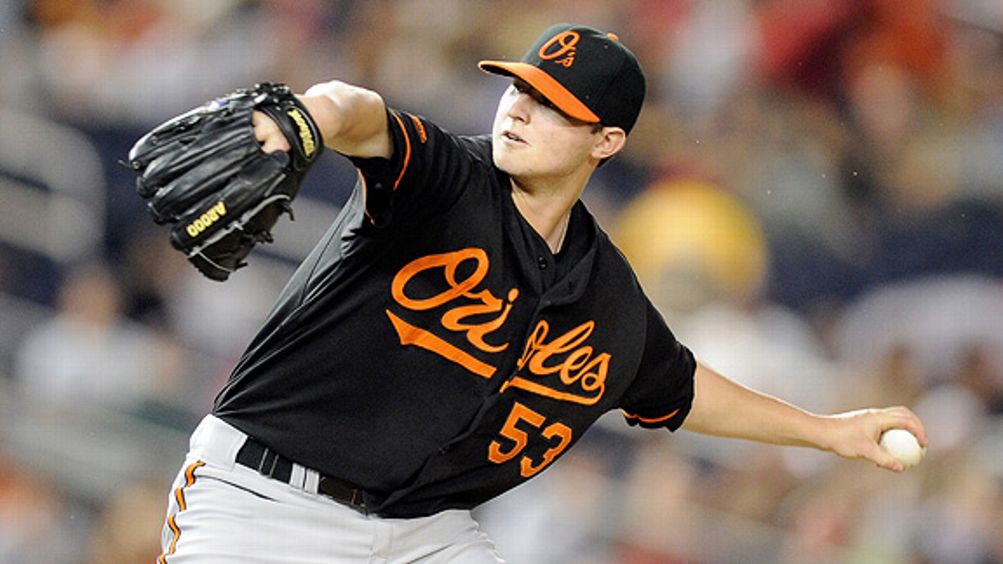 Since then — in the 13 seasons and counting since the Orioles capped their last good summer by losing to the Cleveland Indians in the 1997 ALCS — they’ve lost in ways hard for even the most pessimistic mind to imagine. They’ve lost 267 more games than they’ve won. Hell, it’s been five years since they last won even 70 games in a single season.

They’ve been done in by a host of reasons almost too depressing to list — by Peter Angelos, the game’s second-worst owner;1 by a succession of impossibly inept front-office and on-field overseers; by a strange addiction to high-priced former stars long past their prime;2 and by a series of terrible clubhouses, including what I believe to be the single worst clubhouse in the history of baseball, which I’ll vent about a little later because I’m still not over it.

When Zach Britton was drafted by Baltimore in 2007, he’s not sure that he’d seen so much as a single Orioles game. They’d just never entered his field of view.

“I didn’t even know who Jim Palmer was,” he said last week, sitting in the dugout before a game in Toronto.

Just then, Jim Palmer walked by in a shirt and tie, blowing sunflower seeds all over the turf.

“I mean, I knew he was a Hall of Famer,” Britton said, a little too quickly.

But Britton isn’t alone in his absence of memory. For an entire generation of fans outside Baltimore — and even a fair share of them in Baltimore — the Orioles have ceased to exist. A once-proud franchise, Jim Palmer’s once-dominant team, has disappeared into baseball’s great hopeless void. There have been a grand total of six ALCS games at Camden Yards; the Orioles have lost five of them. They have a long way to go to become even afterthoughts.

“Believe me, when I got drafted, I heard all about it,” Britton said. “People kept telling me what a bad organization it was. The most positive thing I heard was that I should be happy because the team had no talent and I was going to fly through. In my first couple of seasons in the minors, even, people seemed OK with losing. They were counting down the days until the season ended.”

“But to be honest, I didn’t really like that,” he said. “I didn’t want to accept losing. That wasn’t me. I want to win every game we ever play. I kind of decided we would.”

There it was, for 8½ blissful days. “My favorite time in the big leagues,” Britton said of this season’s start.3

After Brian Matusz opened the year on the disabled list, Britton was unexpectedly tabbed to pitch Baltimore’s third game of the year. In his major league debut, he allowed a single run on three hits to finish a sweep of the Rays in Tampa Bay. The next day, the Orioles played at home for the first time this season, against the Detroit Tigers. The weather was perfect. The ballpark was full. Baltimore was in first place in the Beast.

When Zach Britton was introduced — when he stepped through the gate and onto the grass in centerfield — he received a rousing ovation. Here, in this left-handed kid from California, was hope.

“The place went crazy,” Britton said. “I didn’t think anybody would know who I was. But they knew. I had goose bumps the entire time.”

By the end of that week, after they took two of three from the Tigers and the first game of a doubleheader against the Rangers, the Orioles found themselves an improbable 6-1. Britton shut out the Rangers in that game to go 2-0, on his way to a 4-1 start with a 2.84 ERA. He became the first Oriole rookie to win four times in the month of April.

Back then, Britton sat in an empty Camden Yards, hours before a game, with Matusz and Jake Arrieta. It was just the three of them in that great silent ballpark. The young rotation had come up through the Orioles system together, combining to make for one of the best potential homegrown trios since Hudson-Mulder-Zito for the Oakland A’s, or at least Toronto’s Halladay-Carpenter-Escobar.4 Now they sat together — having arrived all at once in this different Baltimore, in this city that, for so long, had seemed less like a destination and more like a dead end — and they allowed themselves to imagine out loud.

“We imagined that stadium full, the lights on, at the end of October,” Britton said. “We talked about how awesome that would be, to pack that place in the postseason. We like this city. We like this team. We feel like it’s a family, and we really want to win. I’ve seen the Yankees and Boston, and they have this aura — like they expect to win every game. I want that for Baltimore.”

After his head-turning start, Britton had a couple of tough outings, losses against the A’s and the Blue Jays that hinged on single bad pitches. Buck Showalter called him into his office. The manager was worried that Britton was expecting to be too much like perfect in a game that was designed to make you fail, especially in Baltimore. “What?” Showalter said to him. “Did you expect to go 25-0 with a 0.00 ERA?”

High expectations will carry you only so far, it turns out. The Orioles are still losing. They’re deep in last place, where virtually everyone expected them to be. They’ve had bad luck with injuries. They’ve lost a lot of close games, especially in extra innings. Their bullpen hasn’t been good, and their veterans seem especially old. Vladimir Guerrero shows the occasional flash of his former self, but Derrek Lee is mostly gone for good, and Brian Roberts has been sidelined for weeks with concussion-like symptoms.

Even Britton has had his confidence wobbled. He’s recently moved from the third-base side of the rubber to the first-base side, trying to give his slider more room over the plate — one of those tiny little signals that he isn’t as well-constructed as he needs to be.

About that worst single clubhouse in the history of baseball … I don’t want to overstate this, but there were nights when I believed the 1999 Baltimore Orioles had been purposefully assembled to destroy the will of others to live. A springy Labrador puppy could bounce into that locker room and it would immediately turn into a pile of burnt hair and ashes. Clocks and watches mysteriously stopped working in that clubhouse. Unearthly howls came out of the showers and the trainer’s room, where I’m pretty sure there was a pentagram stained into the carpet with the blood of innocents. I can’t claim this for a fact, but I’d heard a rumor that 17 different kids worked as clubbies in Baltimore that season because the first 16 were cooked over open fires and eaten.

Ray Miller was the manager. He might have been the only man on earth who needed more muscles to smile than frown. Cal Ripken’s blue eyes had turned jet black by then, his shoulders still sagging under the unbearable weight of The Streak. Joey “Albert” Belle was on that awful team, and he invariably stood at the entrance to that clubhouse with a bat in his hand, ready to beat unsuspecting trick-or-treaters to death. Brady Anderson, Will Clark, Delino DeShields, Scott Erickson, Mike “I went to Stanford and got a degree in Advanced Prickery” Mussina … It was a sour, pitiless collection of mostly angry men, marching like orcs through an interminable season.

Even a kid like Zach Britton — a really smart, terrific, optimistic kid5 — would have walked into that clubhouse and immediately felt his back start to hunch and his teeth sharpen into fangs.

Instead, thankfully, blessedly, he finds himself in this particular clubhouse, during this particular season. Despite everything his Orioles are still struggling through — still stuck under the ancient thumb of Angelos and mired in the middle of yet another losing month — and even though he must know in his heart that his team still has a long way to go to beat Boston, to beat New York, he still believes in Baltimore. He believes in his new team and his new city in a way that makes you want to believe, too.

“I feel like everyone here’s got my back,” Britton said. “J.J. Hardy, I love that guy, because I always feel like he has my back. Adam Jones has my back. The list goes on and on. I can’t really explain it. I don’t know why, exactly. It just feels like we’re going to turn it around.”

It’s easy to come up with the reasons for failure. Most of the time, it’s easy to figure out why something hasn’t worked. Autopsies have always been more science than art.

Success isn’t like that. It’s harder to dissect. Sometimes, even looking back at how a good run began, no grand theory emerges, no great explanation. Sometimes, it’s just because someone like Zach Britton happened to come along, and he decided that he was going to believe.