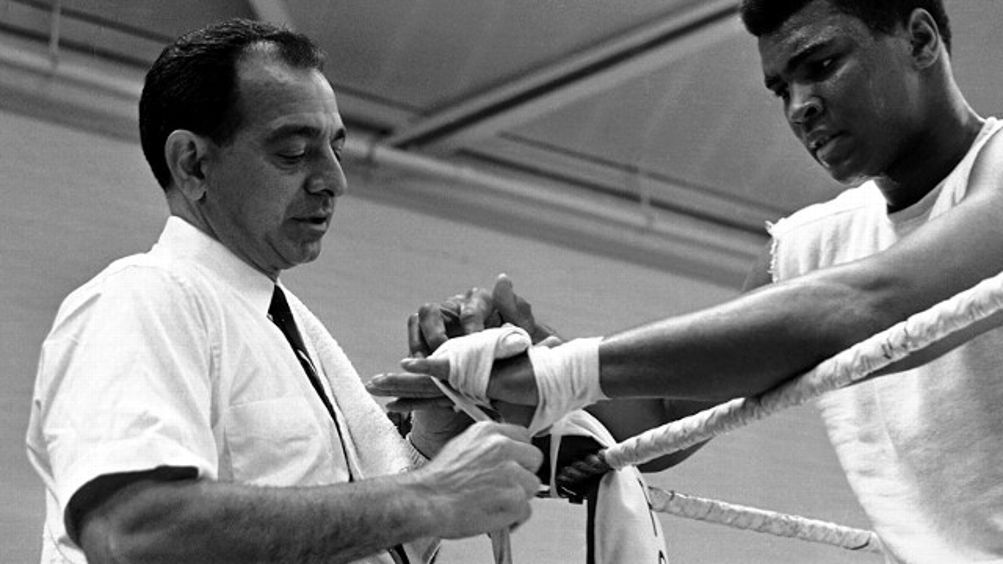 Angelo Dundee sent postcards. They came from everywhere. “With Willie in Puerto Rico,” one said. Another, “Dupas in Miami tonight.” He carried an address book and sent postcards to sportswriters. It was so quaint, postcards showing he’d thought of you. Sometimes, he called.

Such a sweet, sweet man. Angelo Dundee, the son of an Italian shepherd, came to be boxing’s most famous trainer. He was an island of sanity in Muhammad Ali’s mad world. He was in the corner for a dozen champions, among them Willie Pastrano, Ralph Dupas, Carmen Basilio, Jimmy Ellis, Luis Rodriguez, and, if only for one fight, George Foreman. Sixty years ago at a fight, the short, dark, Italian immigrant’s son met a luminous, willowy model named Helen Marone. “She is,” he would say, “my greatest champion.” They were married three days after she came to Miami to tell him she couldn’t marry him because her very Southern Georgia parents would never allow such a mismatch.

“Helen found this thing looking for something else,” Dundee said. “You’ll like it.”

The mailman delivered a memory. It was an 8×10 photograph of an impossibly beautiful young man, 18 years old. There was a sunrise in his smile. He flexed his arms overhead, a strongman’s pose. He sat on a fighter’s stool. His name ran in script letters across his white workout shirt: “Cassius Clay.” All of life awaited him. Behind Clay, Dundee leaned on the ring ropes. Behind Dundee, light came through a pair of tall windows painted with block letters: GYM. The trainer and the kid were in the 5th Street Gym, Miami Beach, 1960.

Two weeks ago, he and Ali were still together. God only knows how Dundee did it. Up from nothing, scrambling for survival through the Depression, street-smart, sly, and unfailingly optimistic, he came to Ali with a psychological gyroscope that kept him even-keeled in a quarter-century of unprecedented turbulence. Dundee’s partner in Ali’s corner, the fight doctor Ferdie Pacheco, told me, “Angelo did it by being an innocent. He was soft-hearted, kind, gentle. He was the exact same man Ali was — but no one knew that about Ali then. They clicked in ways nobody could ever have guessed, let alone explained.”

The malevolent Fruit of Islam thugs — the thick-necked muscle of Elijah Muhammad’s Nation of Islam in the 1960s — wanted the little white guy gone. Dundee stayed. He stayed through Sonny Liston, Malcolm X, Vietnam. He knew the glory of Zaire and the hell of Manila. He outlasted three of Ali’s wives and walked without harm through the fight game’s snakes, who were licking at Ali’s feet. Pacheco’s take: “Angelo kept his nose clean. He went about his business, nobody else’s, and he was good at staying in the shadows. He knew Ali was the star of stars. He was just along on the ride, and he was happy to be part of the circus.”

This January, though feeling ill, Dundee flew to Louisville for a celebration of Ali’s 70th birthday, a celebration in name only, for all that’s left of the Ali we knew are the abstractions layered onto the myth of a man who, once upon a magical time, lived those ideals. That man is now old and infirm, withered and silent, sitting in a wheelchair. It was cruel of fate, which had been so kind to Dundee for so long, to send him home from that party with a blood clot that put him in a hospital. On February 1, 90 years old, Angelo Dundee died, and a time died with him.

He came to boxing when boxing mattered. He knew men who knew men who knew Jack Johnson. He knew the great trainers Charley Goldman, Whitey Bimstein, Chickie Ferrara. He heard Ray Arcel talk of taking men in against Joe Louis. “They’d be all right until they looked across the ring and saw Joe,” he said. “Then they wilted like tulips.”

Dundee was born in Philadelphia in 1921, one of five sons of Angelo and Philomena Mirena. Before World War I, the shepherd had taken his wife out of the mountains to the toe of Italy to catch a ship across the Atlantic. He found work driving spikes into railroad ties. Mirena’s firstborn son, Joe, became a boxer; to hide the work from his mother and to escape discrimination against Italian immigrants, he changed his name to Joe Dundee. All the Mirena boys became Dundees.

In 1948 Angelo joined another brother, Chris, who was managing fighters in New York. Afternoons, he hung around Stillman’s Gym, watching trainers. Every night, he’d go to a fight club. His introduction to training happened as quickly as a man could toss a roll of tape to him. He told the story to Dave Anderson for In the Corner, a book on the trainer’s art: “My first night, in Fort Hamilton out where the Verrazano Bridge is now, I was standing around the dressing room when Chickie Ferrara threw me two rolls of gauze and one roll of tape and said, ‘Wrap this kid’s hands.’ I said, ‘I never wrapped hands.’ So he showed me.”

Then, in 1957, in Louisville with the light-heavyweight champion, Willie Pastrano, Angelo Dundee took a phone call from a young man who said, “Mr. Dundee, my name is Cassius Marcellus Clay. I’m the Golden Gloves champion of Louisville, Kentucky.” There followed a list of fights he had won and championships he intended to win, including the Olympics and the heavyweight championship. “I want to talk to you and Mr. Pastrano.” Dundee said to Pastrano, “Some nut downstairs wants to talk to us. But he sounds like he might be a nice kid. Want to talk to him?” Pastrano said, “Why not? Nothing good on television.”

Dundee had learned the game by listening to old men talk. Here was a kid speaking their language. How much roadwork did Pastrano do? How many times a day did he eat? How many rounds did he spar? Dundee liked both the kid’s hunger for information and the intelligence of his questions. “By then, I’d worked with six champions,” Dundee said, “and none of them ever talked the way the kid did.”

After Clay won a gold medal in the 1960 games at Rome, his sponsors hired Dundee to make him a pro. Dundee may have done the smartest thing any trainer/coach/manager ever did. He left Clay alone. He recognized supranatural abilities when he saw them. He took credit only as a guileful cornerman looking to help his guy. Dundee once slit a glove to gain Clay time to recover from a knockdown. Hearing Clay complain of “something in my eyes,” he pushed him off the stool in the first Liston fight with one instruction: “Run!” Dundee loved a thing the estimable Eddie Futch said. After 11 rounds in Manila against Futch’s man, Joe Frazier, Ali thought to quit. He said he felt near death. But then, as always, he came off the stool. “Angelo prevailed upon him to continue,” Futch said. Ali won when Futch wouldn’t let Frazier come out for the 15th round.

There are people who believe Dundee should have prevailed upon Ali to quit — and long before Manila. Those people believe Ali’s condition today is the result of brain damage suffered in 30 years of being hit in the head, the last decade by men younger and stronger than him. In fact, on an April morning in 1978, a few months after Ali had been beaten by the unknown Leon Spinks, Dundee told me he wanted Ali to retire.

“You don’t need any checks,” Dundee said. “There wasn’t anything wrong with you. You were in great shape. Just forget it now, Muhammad. You got nothing to prove to anybody.”

But he knew his guy wouldn’t go away beaten. He said, “I’m not God. Muhammad quits when he wants to quit. Not when I think he ought to. Who am I? He wants to go on, he goes on. He’s earned it. He can do what he wants and nobody ought to say any of that baloney about having so much ‘heart’ it’ll wind up hurting him.”

Ali fought for three more years, always with Dundee in his corner.

Dundee was still looking for fighters the last time I saw him, six years ago. He had worked as a consultant to Will Smith on an Ali movie and had helped the actor Russell Crowe get through a movie in which he played a fighter. But Dundee was 84 years old and pale and tired, and he stumbled over names and lost the thread in sentences. As Red Smith taught us, I closed the notebook when there was nothing more to learn. Then, when I thanked Dundee for all the years, and told him to thank Helen for finding the photograph of the young Clay, he spoke in a whisper.

Ferdie Pacheco had told me about her cancer and said he had told Dundee he should be ready for the end.

“So I’ve gotta be with her as much as I can,” Dundee said.

“We’ll be together soon.”

Dave Kindred is the author of Sound and Fury, a dual biography of Muhammad Ali and Howard Cosell.