Can the Orioles Buck History and Stay Above .500? 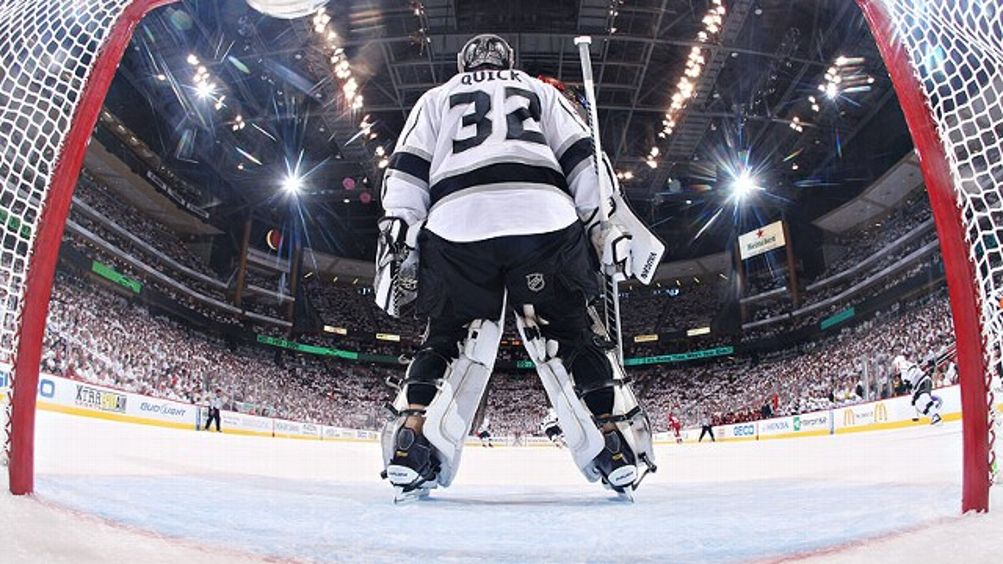 Reading through some of the early reactions around the Internet to this morning’s news that Washington Capitals head coach Dale Hunter had decided to step down — “I’m going home,” he said, with “home” translating at least partially to “behind the bench of the Ontario Hockey League’s London Knights,” the major junior team his family owns and operates — one offhand remark caught my eye. The Caps only won one round with him, it said. Same as last year.

It’s amazing how small the step is, in the playoffs, between a leap forward and a stumble back. In the Capitals’ case, one win ended up the difference between “they made it to the Eastern Conference Finals” validation and “they only won one round” disgust. Same goes for the Rangers: Despite a better-than-expected season, a loss to Washington in Saturday night’s Game 71 might well have laid the foundation for those slow news day creeping-doubt narratives, maybe ones “raising questions” about Henrik Lundqvist in the postseason, or “questioning the commitment” of Marian Gaborik, or “taking to task” John Tortorella’s tactics.

There’s every chance that Hunter would have left the team regardless of how far Washington advanced. (The man had changed back into his London Knights jacket before even leaving the facility! That’s like breaking up with someone while your new significant other idles outside waiting for you in the car.) Still, his so-immediate departure is one more hash mark on the team’s bizarro timeline of a season, particularly coming as it did so shortly after former coach Bruce Boudreau signed a two-year deal with the Anaheim Ducks. The good news is that this gives the organization space to start fresh and time to stop and look around. (There are plenty of folks to consider.)

For the four teams that remain in the playoffs, getting to the Conference finals is like reaching a video-game checkpoint, insulating them from the worst kinds of in-hindsight negativity. Still, no one wants to be the team that “was just one game away from the Cup finals” — even though there’s a very good chance that at least one series will end up being exactly that painfully close.

It’s no secret that L.A. goalie Jonathan Quick has been the Kings’ most important player throughout their bad-bounce season and into their powerful playoff run. But what bodes so well for the team (and what is so scary for opponents) is that you could make a legitimate case for someone else as playoff MVP. Captain Dustin Brown has scored seven goals and added six assists in his 10 games this playoffs. Two of his goals came shorthanded, and three have been game-winners: in Game 3 against Vancouver, a series-ending Game 4 against the Blues, and Sunday’s first Western Conference final game against the Phoenix Coyotes. Asked about the play of Dustin Brown, head coach Darryl Sutter said that he had “taken it to the next step” during the playoffs. (In contrast, Phoenix coach Dave Tippett lamented that the players on his team weren’t able to “raise the bar” of their play as required by the circumstances.

Brown and his linemates Anze Kopitar and Justin Williams combined for two goals and two assists, but they weren’t the only players who stood out during a game in which the Kings showed no signs of a weeklong layoff. (The Coyotes did not record a shot on goal until nearly seven minutes in.) The Kings’ defensemen Slava Voynov, who according to Pierre LeBrun helped give L.A. GM Dean Lombardi the breathing room to trade Jack Johnson for Jeff Carter, assisted on Brown’s game-winning goal. Twenty-two-year-old Dwight King scored twice for the name on the front and the back.

Asked after the game if the Kings’ top line had given the Coyotes particular trouble, Tippett dismissed the notion.

“I thought their whole team was better than our team,” he said. “We weren’t close in that game. We got beat in every facet of the game.”

That wasn’t entirely true. Phoenix goalie Mike Smith had the edge on Jonathan Quick, who played well but let in a bloopery shot that came wobbling in from the red line 13:26 into the first. The Kings outshot the Coyotes 48-27, but Smith stopped 44 shots and never allowed L.A. to take a two-goal lead. (They scored their fourth on an empty net.) Other than in the goal, though, Phoenix had trouble matching up to the Kings on both sides of the ice. (That’s no way to get recognized at Best Buy!)

“You know the Coyotes have won both games at home in prior series, right?” said Sutter, who in my opinion has possibly unseated John Tortorella as the most entertaining-to-watch coach — particularly given the facial expressions and the prairie mumble. L.A.’s victory was their sixth straight road win in this year’s playoffs and their eighth in a row including last season, the longest streak since the late-’90s New Jersey Devils.

Though in a way, it looked a little bit like a home game for the Kings. Phoenix fans preserve the franchise’s old “Winnipeg whiteouts,” much to the chagrin, I would imagine, of guys like this. (I would think that was an Onion video if the Onion‘s hockey coverage wasn’t always the same “Ha-ha no one watches this sport” dig.) But while aesthetically pleasing, the look inside the arena is also misleading, since the team in white on the ice is never the Coyotes anymore: The NHL moved away from home whites in 2003 based in part on the sometimes gaudy, always lucrative alternate third-jersey market.

Gary Bettman dropped an interesting factoid a few months ago on one of his “radio hours” — which I like to think of as FDR-style fireside chats that a troubled nation gathers round to hear — saying that at one board of governors meeting a few years ago they proposed letting the home teams decide which uniform color they wanted to wear. The resulting debate was more contentious, he said, than the recent negotiations over realignment, and ultimately fell by the wayside. I say let the team decide, equipment managers be damned! Speaking of which, Harrison Mooney notes that this series includes a familial battle between rival equipment managers, a subplot that really needs to be turned into a film.

Commence the bridge-and-tunnel references and the flashbacks to the ’90s! Bring back the old hate-filled message board days filled with slurs like “The Rag$” and “The Debbies”! And condolences to Flyers fans for having to watch this matchup. If you want to really forget about things, just take a sip every time you hear the word “Matteau” or “guarantee” and you’ll be out in no time. (That Games 3 through 7 are all scheduled on the very same nights as their counterparts in 1994 will only speed this forced-nostalgia process along.) Devils fans, I don’t recommend watching this video.

“I’m not too interested in and I hope the team isn’t too interested in getting caught up in all the sideshows as far as Jersey–New York Rangers,” said Rangers head coach John Tortorella (who according to the New York Daily News also “critiqued the ‘crappy setup’ of his press conference).

But in the other locker room, there were those who were more than willing to talk about the past. “My first year in the league we played them in the first round, and it was the coolest thing I’ve ever done in my life,” said Devils roughhouser Cam Janssen in an interview that had me cracking up. (It’s all in the delivery — go to the 2:39 mark to hear him.)

Many are wondering if Janssen will see time in this series, given the pugilistic manner in which several of the two teams’ most recent games have been played. Janssen has sparred with Mike Rupp, John Scott, and Brandon Prust this season alone. “We both did what we had to do,” he said after one battle with Rupp. “Kind of set the tone.” The playoffs tend to have a different tone, though, as Devils captain Zach Parise pointed out. And the Devils have made their way to the Eastern Conference finals in part by not engaging in extracurriculars. Against the Flyers, a team known for provocation, staying out of skirmishes was as much a part of New Jersey’s game plan as was their spirited forecheck.

There are outstanding questions, though, and with bigger implications. Like whether the Devils can keep up their stifling penalty kill, which wavered in the first round but held the Flyers to just three extra-man goals during the Eastern Conference semifinals.

Then there’s the matter of whether the Rangers can improve their offensive efficiency. Of the four teams remaining in the playoffs, the Rangers have seen a significantly low percentage of their shots go in the net. Marc Staal leads New York in even-strength on-ice team shooting percentage. Shots taken by anyone on his team while he’s on the ice during five-on-five situations have resulted in goals 8.59 percent of the time. On the Devils, seven players have better numbers than that. In the West, the difference is even bigger: Phoenix has eight players above Staal’s team-best mark, while the Kings have 12. Dustin Penner’s playoff average is 18.60 percent. (Typically, these numbers even out at around 9 percent, but there are so few playoff games to work with that there’s no guarantee it will smooth out in the short term.)

On the blue line, the Devils’ top defensive pair of Bryce Salvador and Marek Zidlicky will look to continue the offensive production they’ve brought to this postseason, but they’ll have to do it while limiting turnovers. And the Rangers will hope their defensive corps won’t grow tired logging the concentrated minutes they’ve played during two seven-game series in a row. (Dan Girardi, Marc Staal, and Ryan McDonagh will need all the energy they can to face Ilya Kovalchuk and his line.)

“You play so hard for each other, nobody gets tired,” McDonagh said after Game 7 against Washington. We’ll check back to see if he still feels the same way when the series is over. There’s a good chance it won’t be for another two weeks.