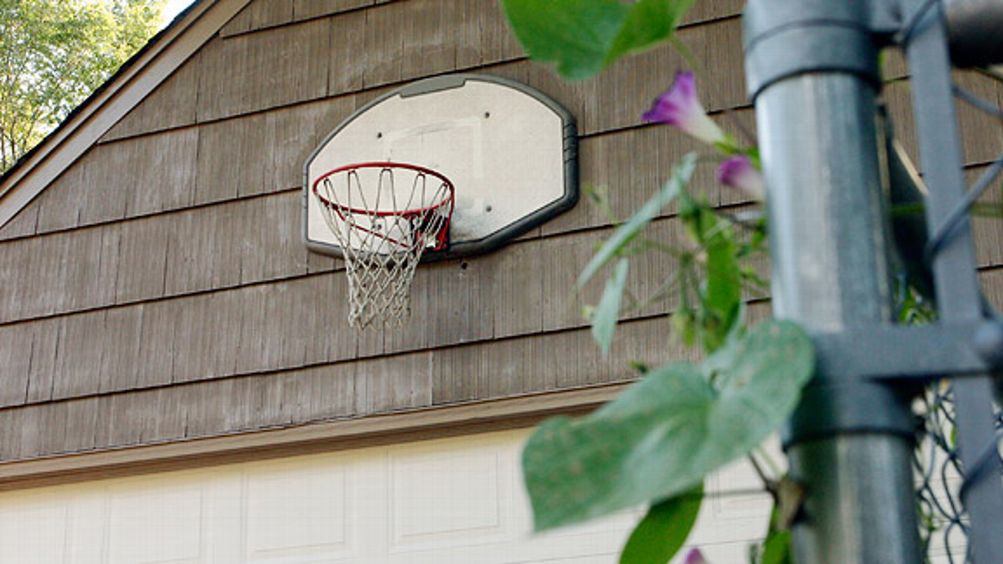 When I was 11 years old, my dad died — killed himself, in fact, while sitting in a van in our driveway. Our home in Texas filled with sympathy gifts. Mom got flowers and a new microwave. A few months later, an uncle arrived from Albuquerque and built me a basketball hoop on the opposite end of the driveway. The hoop’s backboard was made of fiberglass. There was an NBA logo in the lower left-hand corner. Over the next five years, that fiberglass backboard and I became fabulous teammates, like Ro Blackman and Derek Harper, and partners in a fierce existential struggle. If I’m picking a sports hero from childhood who deserves a profile … Jim Jackson … Alvin Harper … nope, I’ll go with the backboard.

The first thing you could say about my backboard is that it was beautiful. When my uncle installed it, it was the most absurdly white thing I’d seen besides my own legs. It glowed against a backyard tableau of monkey grass, rose bushes, a mulberry tree, crepe myrtles, and a sagging garage apartment. The second key thing about the backboard was its placement: on the long side of a narrow cement rectangle. Picture a court, then, that was wider sideline-to-sideline than an NBA court but not even as deep as a free throw line. There was no top of the key. No elbow. My game was forged deep in the corners. My court was like the factory where Bruce Bowen was created.

Brrrrryyyyyan Curtis, a 5-foot-3 only child, strolls onto this court for the first time. He throws the ball against the backboard. The backboard answers, Thungggg. Which was weird. I’d watched Mavs games at Reunion Arena and noted squeaky shoes and (much later) miked rims. The backboards didn’t make a sound. Yet here, on fiberglass, every bank shot sounded like I was firing artillery shells into the neighborhood. Thunggg. Thunggg. Thunggg.

“Going fiberglass” can do magical things for your Player Efficiency Rating. To bank shots off a glass backboard, you have to have Tim Duncan-quality arc and touch. For the rock-hard backboards on school playgrounds, you need double-Duncan. A fiberglass backboard requires no talent at all. When a basketball hits fiberglass, it instantly loses all its velocity. If you get the angle right, the ball plops down into the cylinder, like a duck being shot out of mid-air. It’s a beautifully corrupt form of the sport, akin to bumper bowling, and best appreciated by kids the same age.

When I discovered the secret of fiberglass it was like Naismith discovering the peach basket. I shot a layup off the backboard — thunggg — and the ball dropped into the cylinder. I backed up to nearly 20 feet — pretty far out on the prairie for an 11-year-old — and heaved the ball toward the backboard. It bounced into the cup again. I picked one shot on the court I liked best, a 20-footer from the left-hand side — my “3.” I used go to that spot around six o’clock and shoot 100 thunderous bank shots in a row. I bet I hit 90 percent. On a bad day.

Bank shots took the form of therapy. I was angry about my dad dying — even if I didn’t show it — and I needed to hurl the ball against the backboard. But I was in a tender enough emotional state that I needed to be good at something, too. The fiberglass backboard came through on both counts. It was like shooting a silky Rabbit Angstrom jumper and committing a flagrant foul in the same motion. My mom looked out the kitchen window and probably thought this was how you were supposed to play basketball.

A frequent trope of sports writing is the athlete who uses sports to escape trauma: dead dads, rough neighborhoods. This — minus the talent — was me. My dad, Dan, didn’t know anything about team sports. Though he was a 6-4 runner who chewed up marathons on weekends, he broke out in a cold sweat when his guy friends brought up the Cowboys’ draft. (In North Texas, knowing the width of Jason Witten’s jock strap is more socially valuable than being able to run a marathon.) When I was five or six, I’m pretty sure I taught him which way to run around the bases. My mom noticed all this and, in a subtle but sly move, steered my play dates toward kids who did have sports-crazy dads. Long before my dad died, I got the basics from outside the house.

There were some assists along the way, sure. My grandfather taught me the fine points of softball. My uncles planned a vacation to Cowboys’ training camp. Mom took me on shuttle runs to Action Baseball Cards on West 7th Street. That’s where we were going one June afternoon, racing to get there before it closed, when we happened to glance inside the windshield of Dad’s van.

Bloody pictures like those creep into your head when you play H-O-R-S-E alone. Call it the Loneliness of the Long-Distance Shooter. So I started dragging a radio out to the backyard. Skip Bayless was in his prime as a Dallas drive-time radio host, and I shot baskets to the vocal stylings of “Dr. Bay.” When the Dallas Times Herald shut down in 1991, Dr. Bay faxed his sports column to interested parties for $99 a year. I was very interested. I didn’t have a fax machine, so I arranged to get Bayless’ Insider by regular mail, and I didn’t mind if the game he was writing about had occurred two days before.

Skip’s voice — reedy and beseeching, the voice of a needy honors student — changed the atmosphere of the court. Here was a man who knew a lot about sports. And wasn’t this the kind of guy my mom wanted me hanging out with? Moreover, the opinions Skip was slinging into the night air were … counterintuitive. He wondered if Steve Beuerlein might beat out Troy Aikman, and, if I remember correctly, called Nolan Ryan a wimp. Skip was a master of setting calculated bonfires in the local media. I might have called him the Christopher Hitchens of North Texas, if only I’d known who Christopher Hitchens was.

With Skip turned up to an uncomfortably high volume — how else was I going to hear him over the thunggg? — the court became a theater of the mind. I started placing calls to The Skip Bayless Show from the phone just inside the back door. I had my own counterintuitive ideas: Should the Cowboys draft Notre Dame’s Rick Mirer and make him Aikman’s backup? Even Skip wouldn’t quite endorse that but — this was huge — he said he liked how I was thinking. I ran back onto the court and heard him say it again, over the air, thanks to the tape delay.

One of the few days I didn’t visit my backboard is when Mom took me to Skip’s remote broadcast at a local restaurant. During a commercial, I told Skip how much I liked his show. What I really wanted, it seems clear now, was to thank him for providing the substitute-dad soundtrack to my life. The fiberglass backboard and Dr. Bay and I formed a blended family. There was an athletic regimen to be followed, there were ideas to be debated, and there was a nice, unthorny subject — sports — that knitted everything together. I wouldn’t forget what had happened down the driveway, but on those nights I built a sort of mental fire escape that I used to avoid it. When I walked off the court a few years later, there was no way I wasn’t going to be a sportswriter.

Now a semigrown writer, I’m 100 percent opposed to cheesy sports metaphors. They’re lame; they’re boring; they’re shortcuts. But here goes one. Before the Mavericks play Game 5 of the Finals, I go home to see my mom in the same Fort Worth house. I walk down the driveway, past the spot where my dad died and up to the basketball hoop. The backboard looks worse for the pounding. There is now a long and vicious crack through it, yet it’s still standing. And — forgive the metaphor — I look at my old pal and think, That fiberglass backboard is me.