Surviving the Apocalypse, the Best Unis in Hockey, and the Peyton Manning Drama 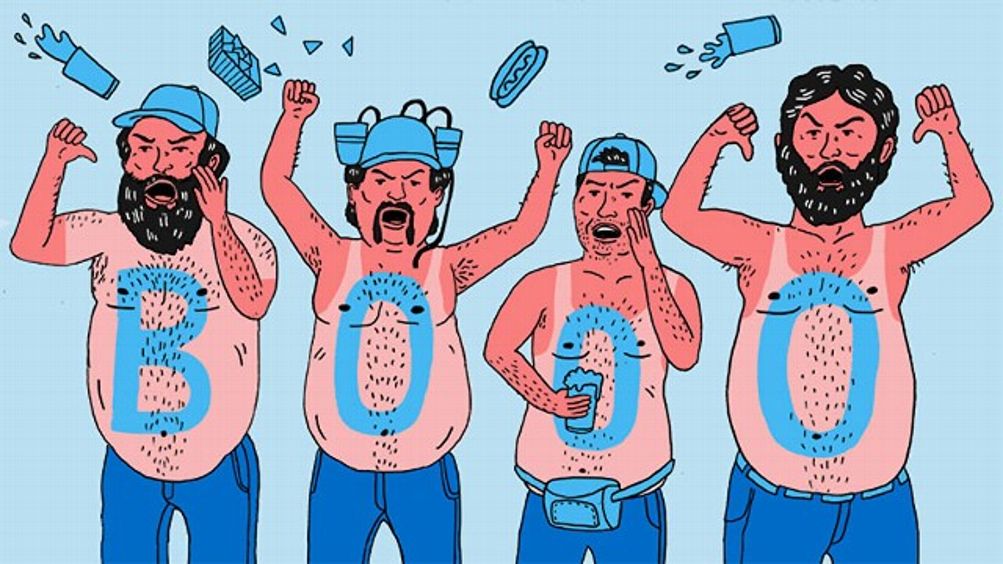 There are three stages in the history of baseball. In the first stage, which ended about 1920, if you stood up in the front row and bellowed, “Hey, Cobb, I hear your mudder used to work bachelor parties,” Ty Cobb would come over to your seat and personally introduce you to his knuckles. In the third stage, which began about 1983, if you stand up and scream, “Hey, Pujols, I hear your mommy used to work bachelor parties,” three men with walkie-talkies will immediately surround you and escort you off the premises. But in the intermediate stage, you could take off your shirt, stand on your seat, and yell any goddamned idiotic thing you wanted to, and nobody would do anything except the beer vendors, who would come by your seat every inning to sell you as many cold ones as you wanted to buy.

Ah, those were the days; syphilis could be cured and AIDS hadn’t started yet. Boobies could be assumed to be natural, and condoms were only sold in the bathrooms of service stations. You could walk up to the gate of Fenway Park 10 minutes before game time and buy a ticket behind the dugout, where you were guaranteed to be seated next to some loud, drunken idiot screaming at Carlton Fisk about his mother. You think I’m exaggerating, but I’m not; I went to 40 major league games in 1982, and I was seated within 15 feet of a loud, drunken fan every game — even when I didn’t go with Neyer. (I’m joking; Neyer was a little kid then, and he doesn’t have to drink to start screaming at players. He doesn’t even have to be seated where a player can hear him. I’ve known him to do it through his television set, cold sober.)

The Internet is still in Stage One; we have loud drunks who feel the need “comment” on everything, but nobody knows what to do about them except to scream back at them, which doesn’t really seem to help. They’re called “trolls” now. I used to be kind of a troll myself, I think. I have sympathy for them, philosophically, and I haven’t shot any of them because they won’t let you bring your gun to the ballpark anymore. Oh, yes; you could; you could carry anything into a game in 1980 — backpacks, firecrackers, plastic explosives. Rick Monday became a national hero in 1976 by rescuing an American flag from a couple of trolls who had jumped the fence and were pouring gasoline on the flag. Think about it: You could bring a gasoline canister into a ballpark, and nobody would say anything about it. Those were the days, man; ah, the stuff I wish I had thought of doing when I still had the chance. Vince Coleman once threw a cherry bomb at a group of fans. His reputation suffered, but I understood what he was thinking. It was just his way of getting even with us.

The second stage of baseball history ended in the early 1980s after an incident in Houston not directly involving the Bush family. Cesar Cedeno had been involved in an unfortunate event involving the death of a young woman in his hotel room, and a distinguished gentleman was screaming at him for three days, yelling things like “Murderer” and the N-word, and also berating Cedeno’s wife, who was seated nearby. Finally Cedeno had had as much of that as he was going to take, and he went Ty Cobb all over the guy — not that I should pick on Cobb; Ruth, Anson, Joe Tinker, and most of the other superstars of that era also dealt with their detractors in a direct, personal manner. Cedeno was suspended for five games, but after a while baseball thought about it and said, “You know, maybe we should have done something about that situation there before Cedeno did.”

That’s the thing about regulating conduct; there is always some conduct that doesn’t get policed. When baseball effectively prohibited its players from defending their good names with physical threats and small weapons, this in essence required the players to put up with verbal abuse from fat, pimply guys whom they could have very easily beaten the grits out of. People say things in public all the time now for which, if you had said them 40 years ago, somebody would have kicked your ass. We’ve regulated the ass-kicking, so the rudeness is out of control, and we wind up with Keith Olbermann and Rush Limbaugh doing political commentary that falls in the same general class as drunken, shirtless bellowing.

I used to know both of those guys. Limbaugh used to work for the Royals. I didn’t really know him, but I bumped into him a couple of times. Olbermann used to be a broadcaster; funny, funny guy. They’re good guys; I wouldn’t have any trouble playing poker with either one of them, but I’m not sure what moron gave either one of them a microphone.

Which is an unfair thing to say; they have complex political philosophies, both of them, and they have microphones because somebody figured out that you could make a lot of money by combining a sophisticated political philosophy with oral flatulence. But I was reminiscing about the good old days, when men were men and high school girls didn’t have nipple rings, and you knew who the heavyweight boxing champion of the world was — even the high school girls did — because there was only one at a time and he was a big deal.

In his 1929 book 20,000 Years in Sing Sing, Warden Lewis E. Lawes says that his young daughter, who was born inside the prison, knew all of the prisoners and was allowed to wander freely around the prison, with a few obvious out-of-bounds penalties. Think about what a different world that is from a modern prison. If I could divert your attention for just a second with a serious question: How did we slip backward like that? How did prisons become these violent hellholes that they now are, so that it is unimaginable to have an 8-year-old girl wandering the hallways of a maximum-security lockup?

It has to do with the three stages I was talking about before. Prisons in that era were in Stage One: If a prisoner acted belligerently toward the guards, the guards would pull out the rubber hoses. The Warren Court put an end to that era, which was a good idea, I suppose, but that pushed us into Stage Two, during which baseball fans would scream at the players and nobody would do anything about it. The inmates now can abuse the guards, and the guards don’t really know what to do about it other than to transfer the offender to an isolation unit when it gets too bad. What is really needed is not a program of reacting to the worst abuse the prisoners can come up with, but a program of reacting swiftly to small infractions. But prisons have pushed the living conditions of the convicts down as far as the courts will allow them to be pushed, so the wardens have little operating margin to react to small infractions.

Isaac Newton’s Third Law of Crowd Control: For every problem you solve, there is an equal and opposite problem that you’ll get around to in about 60 years. Warden Lawes created sports teams for the inmates, to give them something worthwhile to do; this became a popular idea, and for 50 years almost all prisons had sports teams. These can still be seen in a few old movies like The Longest Yard. If wardens now would create sports teams or, for example, let the prisoners play video games, this would create an operating margin for the authorities, something that could be easily taken away if the prisoner misbehaved. But if the courts required that prisoners had a right to play video games, that would just make the problem worse, since that would mean, in essence, that the prisoners could play video games and throw urine at the guards — the best of both worlds.

I’m in Florida right now. Florida — which has an appalling crime rate — has lots of “security” provided by old men in golf carts. Every hotel, strip mall, ballpark, and shoeshine parlor is patrolled by two septuagenarians in a golf cart. We make fun of them, but the fact is that they do provide a good deal of security, by the simple actions of regular crowd control. Crowd control makes the really bad guys stand out from the masses of people milling around, which makes the bad guys go off somewhere else, where they’re not so conspicuous.

Baseball games have crowd control pretty well figured out by this time; the prisons, not so much, while the Internet and reasoned political debate have met at the intersection of screaming and deceit. It’s a truism that people act worse in groups than they do as individuals. In my experience this truism is mostly untrue. Most of the time people act better in crowds than they do as individuals; it’s just that when this is true, we take it for granted, and when it is not true, we notice it. People act as they are expected to act, plus every crowd creates an ethic of conduct that is, to an extent, inexplicable. You can see a movie with one audience and they’ll be roaring at the jokes; you can see the same movie at the same time in the same theater the next day and people will be sitting there snarling like Carlos Zambrano in a room full of umpires. Thirty years ago people expected to go to a baseball game, get drunk, and act stupid; now, no one expects to be able to do that, so the issue doesn’t really come up. Crowd control — like prison control and standing up a democracy — is mostly a matter of managing expectations.