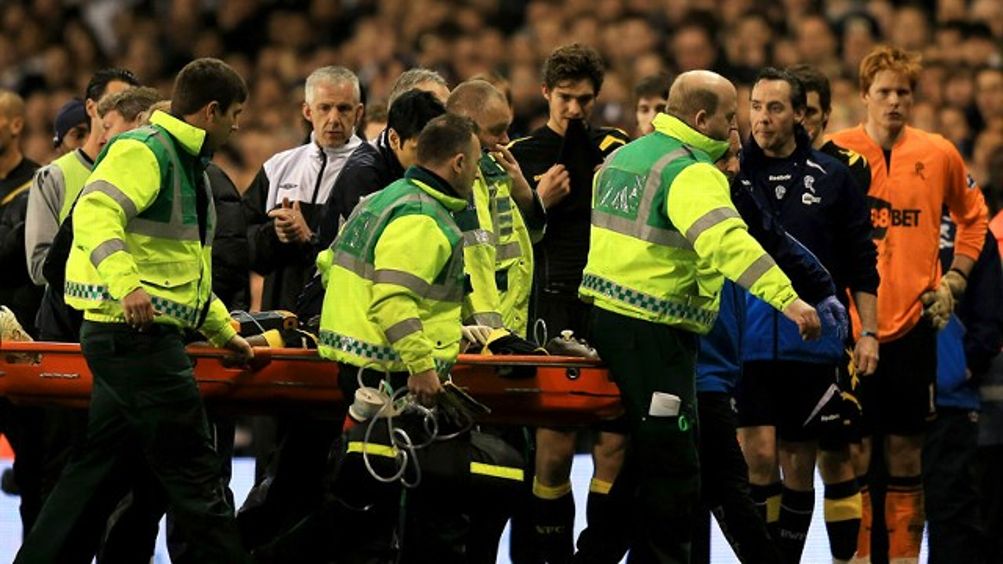 Athletes fall down all the time. They get tackled. They lose their balance trying to make a move. They hit the ground diving for a loose ball. It’s a little strange, when you think about it. I mean, who just falls down? If you’re a stockbroker or a car salesman, chances are you don’t hit the turf during the course of a normal workday. But in most sports, learning how to fall is part of your job. It’s something you train for.

And most of the time, for those of us watching on TV or in the stands, this is no big deal. Athletes fall. Even when there’s an injury, we know there’s a procedure in place to take care of it as efficiently as possible. He’s holding his ankle, here comes the trainer, they’re helping him off, light smattering of applause. Cue Geico commercial. It’s part of the game.

Every once in a while, though, an athlete goes down and it’s … different. There’s no good way to describe this, but if you’ve watched sports long enough, chances are you’ve seen it once or twice and never want to see it again. A player goes down, and almost immediately there’s this miserable, crawly sense that something is different; something is wrong. It’s a sensation, a sort of tingle that spreads from the other players to the fans in the stadium to the people watching at home. Oh no. You can tell when this has happened because within about 10 seconds, no one at the game remembers which team they’re cheering for. Fans on both sides look on with their hands clasped in front of their faces. The top half of the player disappears under a dome of medics. You stare at the player’s foot and will it to move. Did it just twitch? Please get up, please get up, no one is supposed to die playing sports, please get up …

On Saturday, March 17, 2012, just over 40 minutes into the first half of Bolton’s FA Cup quarterfinal match against Tottenham Hotspur at White Hart Lane, as Gareth Bale chased a long pass down the left flank toward Bolton’s goal, Bolton midfielder Fabrice Muamba fell down. For a moment, nobody noticed. When the ball was whistled dead, the camera cut to a close-up on Bale, then cut to Bolton goalkeeper Adam Bogdan as he prepared to resume play. At that point the director found Muamba lying facedown in the grass, with a member of Bolton’s medical staff crouched down beside him.

There had been no one near Muamba when he fell; he simply collapsed. Everyone could see that there was something different about the way the trainer was interacting with him. Why was Muamba not rolling over when the medic was pulling on his shoulder? More and more trainers kept running out; someone brought out a defibrillator. Pacing around the medical staff, the other players looked terrified. Tottenham’s Rafael Van der Vaart covered his mouth with his hands, the universal gesture for helpless near-panic. The fans — the ones who weren’t staring straight ahead in shocked silence — started singing Muamba’s name. After two minutes, Bolton manager Owen Coyle ran out onto the pitch to be by Muamba’s side. After three minutes, players started openly praying. After four minutes, the referee, Howard Webb, called off the rest of the game.

As Muamba was carried off in a stretcher, journalists at White Hart Lane reported that he wasn’t breathing. A short time later, we heard that he was being rushed to the hospital in an ambulance, accompanied by Coyle and Bolton captain Kevin Davies. We heard that the medical personnel had administered CPR all the way to the hospital. And then, for around two hours, we heard nothing.

There’s no gentle way to put this, so I’ll just say it: I think everyone who watched this unfold believed that they had just seen a player die. Muamba had had a heart attack, was the (correct, as it turned out) assumption. On Twitter, in forums, and I imagine in a thousand conversations, there was optimism, but it was mostly of the hoping-against-hope variety. Something to cling to when you know that no one’s supposed to die on a sports field.

And this, really, is when things got tricky for fans. What do you do, in an era of instant knowledge, when there’s simply nothing to know? I can only speak for myself, but I doubt I’m alone in this: I spent two hours refreshing Twitter, obsessively reloading the Guardian‘s live-blog of the match (which turned into a clearinghouse for news), and quietly freaking out. I hadn’t been watching the match when Muamba collapsed, but thanks to the Internet, I heard the news almost immediately, followed the crisis as it unfolded, and now felt absurdly unmoored. My feelings were, I realized, the least important things in the world at that moment, but I was foolishly desperate for news. Again, I don’t think I was the only one.

Muamba wasn’t a well-known player, so every news organization that covers the Premier League filled the gap by releasing a hastily compiled dossier on him. That turned out to be another gut punch, because the picture that emerged was of the sort of person you would naturally root for, even if he hadn’t been, possibly and at best, fighting for his life.1

Muamba was 23. He had gotten engaged only a month earlier. His fiancée ran a Jamaican-food catering business. They had a 3-year-old son named Joshua. Muamba came to England, as an 11-year-old, from Congo, where his father, a former adviser to the dictator Mobutu Sese Seko, had fled political persecution. In interviews, he spoke movingly of his childhood during the wars, saying, “I didn’t live far from the gunshots and the sound of them going off. It was difficult to get used to, especially hearing guns at night. It did have an effect on me.” He seemed studious, diligent, and serious. Despite speaking no English when he arrived in England, he learned fast and eventually earned 10 GSCEs and three A-levels.2 He listened to opera. His dream career, after soccer, was accountancy.

There was no news, so we read about him. How he’d signed his first contract with Arsenal in 2005, after playing for their academy. How his earnest, industrious play had made him a fan favorite at Birmingham, where he’d headed in 2006, and then at Bolton, where he’d moved two years later. He wasn’t a spectacular player, but he was good enough to represent England at the under-21 level, something that — given the cynicism that often infects international soccer — he was almost sweetly proud of:

This is my adopted country. People have helped me, welcomed me with open arms, and given me this opportunity. I’m earning a more than decent living and leading a comfortable life. I’m very appreciative of that. When I hear the anthem, I just think about how far I have come.

Muamba was one of those guys — you know, the ones whose teammates like and respect them, whose coaches never have anything but praise for their effort. In the day-to-day clockwork of sports, those guys can drive you crazy; here comes another commentator with another retrograde cliché about character, Vern. But this wasn’t day-to-day clockwork. This was one specific case of a kid maybe dying for no reason, a kid who actually had an admirable character, in a way that just cut straight through all the accumulated cobwebs of irony that protect you from the mediation of sports. Maybe I’m projecting my own response onto other people, but sitting at home refreshing Twitter, I thought everyone sort of took that to heart all at once, and it added a fresh sense of urgency to our collective desire for him to be OK and our collective sense of our own uselessness.

Athletes do, of course, sometimes die playing sports.3 In soccer alone, the varieties of death experienced by players on the pitch is mind-bending. The “notes” section of the “List of association football players who died while playing” on Wikipedia makes for absorbing reading. James “Daddy” Dunlop, dead at 21 in 1892: “In a friendly game against Abercorn, he fell on a piece of glass which led to tetanus setting in; he died ten days later.” David “Soldier” Wilson, dead at 23 in 1906: “Suffered a heart attack while playing against Burnley, probably caused by heavy smoking. He attempted to return to the field of play even when in great pain.” At least four players have died after being struck by lightning on the pitch. In 1999, a 15-year-old named Ferenc Biro was killed when, as he was standing under the goal, the crossbar fell on his head.

For what felt like forever, all we heard about Muamba were random, hard-to-verify, sometimes contradictory tidbits. His heart had been stopped for 20 minutes. His heart was beating again in the ambulance. A Tottenham fan who was also a cardiologist had rushed from the stands onto the pitch to help the fallen player.4 We devoured all these reports, even though none of them told us anything. I couldn’t stop wondering whether the silence was good news (he was in emergency surgery, and therefore alive) or bad news (he died before reaching the hospital and the authorities were informing his family).

Then, finally, around 90 minutes after the ambulance left White Hart Lane, Sky News reported that Muamba was in stable condition. That turned out to be misleading; he was actually “critically ill,” according to the statement released shortly thereafter by Bolton. But he was alive. I don’t know Fabrice Muamba personally. I had barely even noticed him as a player. But for an hour afterward I felt like the sky was a mile higher overhead.

Athletes aren’t supposed to die playing sports, and, amazingly, Fabrice Muamba didn’t. His heart stopped beating, all told, for 78 minutes. He was “in effect” dead, the Bolton club doctor said, for more than an hour. He was given two defibrillator shocks on the pitch, another one in the tunnel, and 12 more in the ambulance on the way to the hospital. None of them worked. Then, at the hospital, his heart started beating again, and after a while he woke up. He’s not well, by a long shot, but the latest reports say that he’s resting comfortably in the hospital, he recognizes his friends and family, and he’s talking a little in both English and French — news that feels miraculous considering how grim things looked in the hours after he fell.

We still don’t know much about what happened, why he collapsed, or exactly how he was saved. His heart stopped, and beyond that, most of the story remains to be told. But an apparently good person is still alive in the world, which is a good beginning, and a good ending too.