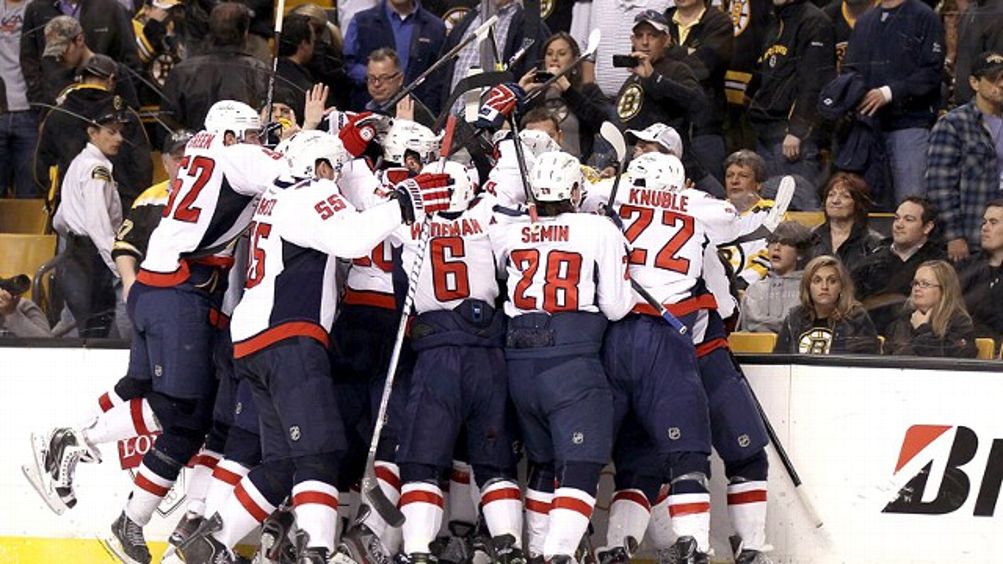 In early March, with the Washington Capitals losing to the hapless New York Islanders and the team’s playoff hopes slowly dwindling away, team owner Ted Leonsis donned a hideous “rally poncho” bought for him by a friend in Mexico. “It is so ugly it is beautiful,” he said. It also worked: The Caps scored twice to tie the game and added a goal in overtime. At the time, the win pushed them back into eighth place.

If Leonsis didn’t have the old Capitals rally poncho specifically in mind after last night’s first-round win over the Boston Bruins, he at least seemed to have absorbed the garment’s spirit. “That wasn’t pretty,” he said when asked about Joel Ward’s chippy Game 7-winning overtime goal. “That was beautiful.”

Of course the series between the Boston Bruins and the Washington Capitals would stretch to seven games, and stretch on into overtime from there. How else to end a playoff matchup that had turned into the tightest competition in hockey? For the first time ever, all seven meetings between the two teams were won by a margin of just one goal. Four of them ended in overtime. Two were decided in the game’s final two minutes. For just under three minutes in Game 5, the Capitals led by a score of 2-0 — the most lopsided the score would ever get between the two teams.

That the series was even close was a big win for the Capitals, whose goal was to keep it precisely that way: low-scoring, physical, full of hits and blocked shots. So devoted was head coach Dale Hunter1 to keeping things tight and defensively minded that throughout the series he often kept the more goal-oriented Alexander Ovechkin on the bench. Ovechkin was on the ice for just 15 seconds of Game 4’s final 14 minutes. In Game 5, he played 15:34 total, a career low for him in the playoffs. In Game 7, he got 4:04 of ice time in the first period and finished with 16:25 overall, only ninth most among forwards. When he was put on the ice, it was in strictly offensive situations. If departed head coach Bruce Boudreau had been trying to mold Ovechkin into a more two-way player, Hunter appears to view him as a guy who’s good in one direction half the time. (That half being when Dennis Seidenberg isn’t on the ice, I suppose. What a save!)

Had the Capitals ended up on the other side of the score sheet — which it appeared that they might when Patrice Bergeron found himself looking at a whole lot of net just a minute into OT — it’s a safe bet that most of the reactions to such a strategy would have been negative (and all of them would have been loud). But the nice thing about winning in the postseason is staving off those uncomfortable conversations — those big questions and hot seats and trade rumors — for another two or so weeks.

For the Bruins, that grim phase begins now, and indications are that much of it will focus on the future of Tim Thomas. The goalie’s last minutes on the ice had the feel of an ending, of a pretty old dude looking back on himself. “Great job, kid,” he told Braden Holtby, the third-stringer who helped steal the series for the Caps (and starred in the most badass GIF to come out of the playoffs so far). He skated over to an actual kid, this one a crying fan, to encourage him to turn that frown upside down.2 Ultimately, though, Boston shouldn’t have too much to answer for. They looked beat and got booed — they were snakebitten often, unlucky sometimes, and terrifying too rarely — but they never looked bad or broken. They went seven games, and you got the sense that they would have gamely gone seven more. They’ll be back.

Meanwhile, a Capitals team that would have had much more to discuss had it been the one eliminated lives on — perhaps even gathering steam. Suddenly, arbitrarily, the organization has been anointed as “gritty.” Suddenly, they’re brilliant to have signed Joel Ward, Playoff Hero.? Suddenly, all the pieces are falling into place; everything is going exactly as planned. (We’re even getting lewd-sounding headlines like “Dale Hunter Snuck His Grizzly Style Into the Caps and Shocked Two Cities.”) That’s the power of a Game 7: Like a cresting wave, a few inches here and a few moments there make the difference between getting knocked down or being pulled along for the ride. It’s not always pretty, but it sure is beautiful.

We’ve already praised Claude Giroux’s filthy first shift, but he wasn’t the only player to visibly wrangle control of a game over the last several days. The Rangers’ Brad Richards played like a man possessed on Monday night, and his go-ahead goal gave the Rangers a 2-1 lead over Ottawa and helped extend the series to seven. (Video includes bonus Mark Messier fist-pump action near the end.)

Also forcing a decisive Game 7 was Travis Zajac, who converted a beautiful pass from Ilya Kovalchuk just over five minutes into the extra session. Both Kovalchuk and Zajac finished the game with a goal and an assist, which was a relief for Devils fans. Although he’s been avoiding questions about his health, Kovalchuk is widely assumed to be dealing with some sort of injury. Zajac, meanwhile, looks to be rebounding nicely from an injury of his own, a bad Achilles tendon that required surgery and kept him out of all but 15 regular-season games.

Piling on the Pylons: The Last Few Days’ Worst Performers

It’s safe to say that this year’s playoffs has already featured some low points in NHL officiating — though I think you’d be hard-pressed to find a fanbase that hasn’t felt grievously wronged, so at least the unfairness is fair! From blown calls to missed penalties to poor game management (and, later in the criminal justice system, unpredictable punishment) the league’s crews have come under a significant amount of heat. Last night was no exception, with the NBC Sports broadcast team going so far as to suggest referee Eric Furlatt was being swayed by crowd noise on a big call late in the third period.3 Whether or not they were right to call him out like that — and the best arguments against were the ones I read here — it’s all part of an uneasy climate that has formed around the officiating and portends some big storms down the road.

I should say that I actually don’t begrudge Yormark the sentiments he expressed to @LaurenAshley07: “you have 70 followers. no one cares what you think.” That’s kind of run-of-the-mill Internet defensiveness, no? Let’s be honest, there’s a roughly 93 percent chance that any writer earnestly taking Yormark to task has also, at some point in the past week, day, or probably hour, shaken his or her head unrelatedly at one critical tweet or another and said, in self-consolation: “Whatever, this BonJoviFan69 guy has like 20 people following him. I shouldn’t care what he thinks.” (I know this is true because I’ve seen it happen in every press room I’ve been in, and also every day in my home office.) Still, Yormark was indeed stupid to actually thumb that mal mot out into the world … although he hasn’t deleted it, which I kind of love.

This silly story at least has a happy ending: @LaurenAshley07 was hooked up with sick seats for Game 6 by the Devils, which she took full advantage of, tweeting from her seats a photo of Yormark (checking his BlackBerry, obviously) with a casual “Ohh hey.” Sometimes the most effective comebacks are the simplest. (UPDATE: Yormark has invited @LaurenAshley07 and her dad down to his suite for Game 7. She’s this year’s Green Men! As for Yormark, he’s Kris Jenner–esque in his ability to spin straw into PR/marketing gold. Maybe he got an intro through his brother.)

Evgeni Malkin:
“Really, I don’t have a choice.”
Soviet style.