The Sportstorialist Visits the Republic of Chad 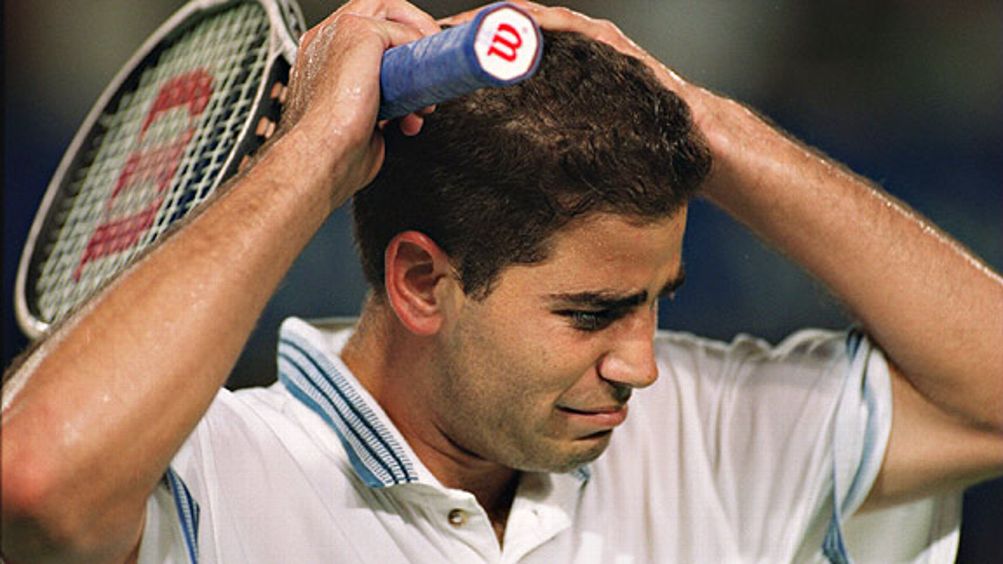 From Bill Tilden through the end of the Sampras era, the dominant mode in American tennis was what we might call the brash style, a flamboyant individualism that cut against the refined grain of the sport. American tennis stars were, with notable exceptions, disruptive (“you cannot be serious”), independent to the point of iconoclasm (Arthur Ashe helped found the ATP in 1972; Jimmy Connors refused to join it), and aggressively, in some cases catastrophically, themselves (Serena Williams wore Serena Williams’ outfits). Over the years, tennis’ posh context — its fundamental duchessiness — has served as the ground for all sorts of mini-rebellions and colorful bursts of ego. But where European players tended to be somewhat theatrical in their insubordination — think of Ilie Nastase’s stylish clowning — American brashness often involved an edge of real anger. American stars weren’t so much acting out from within the game as waging an outside assault on it.

Nowhere was the brash style more obviously in evidence than in the storied contrast between John McEnroe and Bjorn Borg. Two recent books on the rivalry, Stephen Tignor’s High Strung and Matthew Cronin’s Epic — there was also an HBO documentary, Fire & Ice — lay out the narrative of what Tignor calls “the angel and the brat.” Borg was crazy, but it was an aristocratic crazy, a crazy that seemed to emanate from 18th-century salon conventions and the order of succession of the Holy Roman Empire. McEnroe was freewheelingly uptight, a noisy avatar for an America just beginning to realize it could never live up to itself. (The New York Times called him “the worst advertisement for our system of values since Al Capone.”) Borg could have played a match in a museum full of royal porcelain and not made a crack. McEnroe would have breezed through the gift shop in street clothes and left only dust and weeping in his wake.

McEnroe was the most celebrated exponent of the brash style, but he was hardly the only one. For 80 years, an epoch during which American players frequently dominated the game, tennis stars from the U.S. were flashy (Tilden, Andre Agassi), outspoken (Billie Jean King), abrasive (Chuck McKinley, Jim Courier), or some combination thereof (Serena, McEnroe, Connors, Jennifer Capriati). Over the same period, golf, a sport with roughly equal high-society pretensions, calcified into a protocol-worshipping polo-shirt-fest, a sort of Rotary picnic with commentary by Jim Nantz. Golf got blander, not edgier, as you went from the public course to the country club to the Masters. Somehow tennis did the opposite; without losing its country-club pedigree, it became the repository for the kind of anarchic self-expression that the country club would normally refuse to tolerate.

Why this happened isn’t entirely clear, though it’s possible to venture some guesses. For one thing, tennis, with its constant high-speed computation of angles, is a natural fit for temperamental geniuses. For another, the game is essentially boxing for beautiful cowards. The isolating nature of the competition takes those high-strung geniuses and places them under continuous duress and in situations of extreme one-to-one contrast with their opponents. Is it any wonder their personalities tend to get exaggerated? For European stars, the sport’s genteel tradition has historically offered a safe harbor for outsize characters. Borg moves to Monte Carlo; Roger Federer talks calmly about his “superiority,” slips on a Rolex, and repairs to his table at Le Cinq. For American stars, at least until recently, the tradition seemed to chafe. The result was American brashness.

You don’t have to be good to be brash, but it helps. In the past 10 years, as American tennis has declined generally, the brash style has declined along with it. Before he retired, Andre Agassi turned into a tearful national treasure; the Williams sisters, arguably the last two natural practitioners of the style, are nearing their own retirements and hardly ever play.1 Andy Roddick sometimes seems like he wants to be brash, but — as if mirroring his overall game — his potential topped out just north of moderately irritated. Midtier American stars like Mardy Fish and James Blake seem like dudes who could plausibly eat at an Applebee’s. Even a youth phenom like Ryan Harrison, who’s known for barking at referees and smashing rackets, seems driven more by jock entitlement than by the combination of neurotic perfectionism and not giving a fuck that propelled McEnroe.2 Donald Young, the surprise of this year’s U.S. Open so far, is at least legitimately feisty. He has a decidedly nonboring history of cursing at the USTA on Twitter. He also has a decidedly nonbrash history of apologizing when the USTA stares at him long enough.

It seems pretty clear the brash style has been a victim of the collapse of American tennis, and not vice versa. Americans started falling out of the top 10 because the sport evolved beyond the power game and American training centers failed to keep up with their counterparts in Spain,3 not because Andy Roddick didn’t bring a feather boa to Wimbledon. Still, it’s interesting to think about the decline of the brash style alongside American culture, generally. All sports reflect larger social trends to some degree, but tennis, surprisingly, works better than most as a kind of shadow history.

So what, if anything, does the fading of the brash style tell us about American culture? To answer that question, we have to turn to the most conspicuous exception to the rule of American brashness. Pete Sampras, the best American player since Tilden, one of the five best of all time from anywhere, was known less for being brash or even charismatic than for being methodically grim. He was an epoch-making player, but from a style standpoint, nothing about his game would have made Stalin nervous. If anything, he seems like proof that the brash style isn’t an essential component of American tennis.

Place Sampras in the context of his era, though, and his career looks less like a negation of American flamboyance and more like a reflection of the moment when it made itself obsolete. His career coincided with the end of the Cold War, the first Gulf War, the Somalia and Kosovo interventions, the Clinton surplus, and the dot-com boom. His demeanor on the court didn’t represent a lack of confidence so much as the strike-first-strike-hard4 certitude of someone who doesn’t have serious challengers and who therefore sees self-expression as needless posturing. Sampras was tennis’ global policeman, a Grand Slam winner for the end of history.

If Agassi represented, at least at the beginning, American culture’s preoccupation with celebrity — image is everything, etc. — Sampras played like everything celebrity is supposed to distract you from: ink drying on oil deals, Dick Cheney in a corridor, helicopters landing in the dust. It wasn’t that Sampras was a bad guy or that he was trying to communicate those things. He simply happened to be a faceless, overwhelming force at the moment his country — which has its own tradition of brashness, after all — became one, too. When he got sick against Alex Corretja, he calmly puked on the sidelines, then recommenced the bombardment. When Patrick Rafter beat him 7-6 (12-10) in the first set of the Wimbledon final in 2000, he calmly won the second set 7-6 (7-5), tennis’ equivalent of a recount.

The brash style is only viable, Sampras’ career seems to say, in the face of credible opposition. When you become the ruling body, you have nothing left to be brash about. American men won more than half of all the majors played in the decade after the Cold War, and the trend seemed likely to continue forever until the ITF started taking steps to curtail the power game in the early 2000s. You don’t cultivate brashness, or work to stylize yourself, under those conditions; you convert your energy into the responsible maintenance of hegemony. And when that hegemony falters — Roddick won the last major for American men in 2003, shortly after the Iraq War started — you can’t simply reclaim your old brashness. You had your crack at the game, and you lost it.

Well, the game, and the world for all that’s worth, got away from the U.S. at the same time. The surest sign of this — the second part, anyway — is that unlike Borg, the Djokovic/Nadal/Federer troika currently pulling the men’s side of the sport doesn’t seem to exist in any sort of opposition to American culture or to the state of the American game. They don’t invite a contrast. They just have their own thing. It’s amazing, and it has nothing to do with us.

That said, four American men made the U.S. Open’s Round of 16. Mardy Fish, the top-ranked American, is already out, having lost to Jo-Wilfried Tsonga. To make the final on September 11, Andy Roddick will have to beat the fifth-seeded David Ferrer and then, most likely, go through Nadal. Donald Young and John Isner don’t have it any easier. Serena Williams, the only American woman left in the tournament and the last best hope for American brashness, will have to beat the usual assortment of not-quite-famous Russians, Germans, and Caroline Wozniacki.

That’s the sound of the Zeitgeist: pretty good, not great, and with no obvious savior in store.

Previously from Brian Phillips:
When We Need Our Barbarians
Corruption, Murder, and the Beautiful Game: On FIFA’s scandalous history
On the Border: A look at the soccer rivalry between the United States and Mexico
Brian Phillips on Roger Federer, Novak Djokovic, Pete Sampras and the dead kings of Wimbledon
The long autumn of Roger Federer