What’s the Greatest Bond Song of All Time? 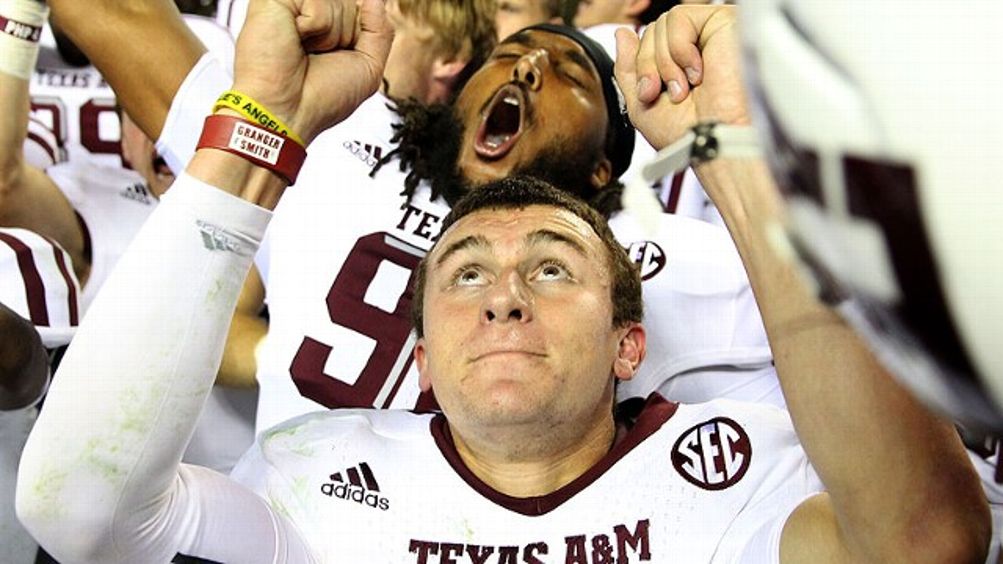 I imagine they are already telling fantastical lies about Johnny Manziel in the Texas Hill Country from which he emerged, but in case they need more fodder, let us hearken to a distant Saturday in Tuscaloosa, when the kid they call Johnny Football nearly fumbled the spheroid that bears his name. This was back when Alabama was the no. 1 squad in the land, and I know it was just this past Saturday, but if it feels like a long time ago, hell, I can’t blame you; everything sure seems different now, on the far side of Texas A&M’s 29-24 win over the Crimson Tide, and I’m guessing there ain’t no going back to the way it was.

So here’s Johnny Football, facing a third-and-goal at the Bama 10-yard line, a hundred thousand randy locals at Bryant-Denny Stadium screaming assorted niceties into his face. He takes the snap, slides forward, bobbles the ball, somehow regains control, ducks out of a mess of bodies far bigger than his, scrambles left, and hurls a pass straight across his compact little frame to a wide-open receiver in the end zone. That made it 14-0 Aggies, and that was the moment you knew trouble was coming, that the old ways of doing things were about to come to an end, that this 19-year-old from a town called Kerrville was about to kick down the saloon doors of the establishment and apologize for nothing while doing it.

It had been brewing long before Johnny Football showed up in College Station, long before he earned the starting job as a redshirt freshman with loose fists and a high school legend’s bearing. (“Johnny’s always confident,” said one of his teammates, offensive lineman Luke Joeckel. “He’s always walking around with a swagger.”) It had been brewing for years now, as offenses spread and quickened and put up numbers previously unseen, as 10 touchdowns in four quarters became a wholly attainable number to strive for. The Crimson Tide were one of the last firewalls, a power team anchored by a tight fist of defense and an offensive line that could block a blue ox and an endless parade of running backs who could shake off tackles like runaway horses. For much of Nick Saban’s tenure in Tuscaloosa, it had worked the way it had under Bear Bryant before him: a pair of national championships, and well on the way to a third, but even Saban could hear the footsteps.

“It’s obviously created a tremendous advantage for the offense when teams are scoring 70 points and we’re averaging 49.5 points per game,” Saban had said a few weeks earlier. “More and more people are going to do it … I just think there’s got to be some sense of fairness in terms of asking is this what we want football to be?”

And so into the breach, and into A&M’s go-go hurry-up offense that the traditionalists assured us couldn’t possibly work in the fire-and-brimstone SEC, stepped Johnny Football, who accounted for 160 touchdowns while in Kerrville, who once put up eight in a single game, who brought out every octogenarian in a town of 20,000 just so they could say they’d seen him play before they went to meet their maker. In Kerrville they didn’t refer to Manziel as Johnny Football because he was also a hell of a baseball player, and he could knock a golf ball into the stratosphere. That nickname came once he got to A&M, and immediately, it rolled off the tongue the way legends do.

Funny, because A&M head coach Kevin Sumlin hadn’t even really mentioned Manziel in the preseason, at the conference’s media days, when a dozen reporters contorted themselves a dozen ways to ask if A&M’s cutesy style would lead to severe beat-downs from the likes of Bama and LSU once the conference season rolled around. A few weeks after Sumlin walked off that podium without slugging anyone in the jaw, Manziel — who’d already had his shirtless mug shot circulated in the local news, in part because he did slug someone and in part because he apparently carried a cache of fake identification cards on his person — was named the starter. Ever since then, the legend’s been swelling, along with the nicknames (though do we really need more than one?); on Saturday, the A&M band spent half the game playing “When Johnny Comes Marching Home,”1 and Johnny Football just kept making plays against a Bama defense that some thought was worth a berth in the AFC West.

They made a play and then got straight over the ball, A&M did; they went up 20-0 in the first quarter, knocked the wind out of the crowd, knocked that press box painting of the Bear into a crooked stance, and then Alabama righted itself, pounding the ball with running backs Eddie Lacy and T.J. Yeldon, riding the steady hand of quarterback AJ McCarron. They cut it to 20-7, and then 20-14 at the half, and you could feel the momentum being sapped. But the thing about Johnny Football is he’s too young to care. At least, I’m going to assume he is, because he’s never uttered a word in a public forum since arriving at school (A&M doesn’t allow freshmen to talk to the media).2

There hasn’t been a moment that’s been too big for him,” Sumlin said, and the second half in Tuscaloosa was no exception. The funny thing was that Bama began to adopt the methods they so despised, running a fair amount of hurry-up themselves, moving quickly to the line to catch the Aggies off guard. The Tide sliced further into the lead, cutting it to 20-17, and they brought all sorts of pressure on Manziel. But he kept finding openings, scrambling to his left and to his right, darting backward and around, throwing slants and curls, mixing it up with quick handoffs, just enough to keep the ball out of Bama’s hands. At times, he resembled Fran Tarkenton, endlessly prolonging plays; at times, he looked like the spitting image of Doug Flutie, the undersize quarterback backing out of trouble and pivoting toward the line of scrimmage; at times, he looked like Steve Nash on the pick-and-roll, dishing to teammates when he ran short on real estate. When he hurled a beautiful deep ball to receiver Ryan Swope, it looked like A&M might go up nine. But they missed a field goal, and then the game kept swinging back and forth until the very last minute. Johnny Football threw another beauty of a deep ball to Swope, and another beauty of a touchdown pass, and finally, it was the A&M defense, of all things, that came up big, intercepting a McCarron pass on a fourth-and-goal at the 2, and the exhausted Tide had nothing left.

“It kind of feels like a lot of teams are trying to run this up-tempo offense,” said Joeckel, the A&M lineman, when it was over. He admitted he’d had no idea what it might lead to over the summer, when all those conditioning drills nearly broke him in half. “The tempo we run, playing 12 straight games is definitely a task … But something feels right about this year.”

Part of that is Johnny Football, of course, but part of it is that the Aggies may just be on the right side of history. It’s not that defense doesn’t matter, but maybe it doesn’t win championships like it once did: The favorite to win the title is now an Oregon team that runs the same kind of go-go offense that repels the traditionalists, and there are dozens more programs just a couple of steps behind. Perhaps there’s a moment when a fad becomes something solid and real, and perhaps that realization hit especially hard on Saturday in Tuscaloosa: Despite Saban’s complaints and warnings, they’d long felt safe and secure in the cocoon of ancient tradition that the Bear had woven through all those decades of goal-line stands and smash-mouth football. Perhaps it doesn’t matter what we want football to be, but what it becomes on its own.

It was a quiet night on campus by the time the A&M players headed toward the bus; at the nearby Delta Kappa Epsilon fraternity house before the game, they’d been drinking heavily on the steps while a cover band belted out an Oasis song. Now there was only the detritus on the lawn, and a small pack of girls nearby, and a few brothers on the porch, sitting silently in rocking chairs, looking far older than their years.