Dancing in the Rain 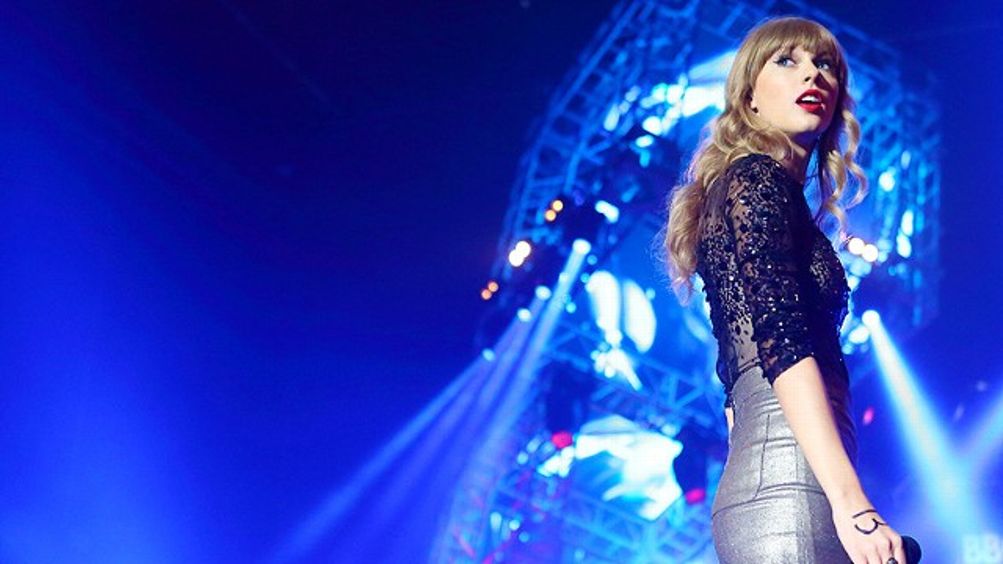 To appreciate Swift before now meant accepting her squeaky-clean image and the omnipresent “Aw shucks, is this audience of 20,000 people really here pour moi?” O-face affectations that came with it. To find her interesting was to peer at the gap between that façade and the reality of a steely, ruthlessly ambitious young woman clawing her way to the top of a crumbling music business more or less on self-generated forward velocity. You can see some of both Taylors in a 60 Minutes profile from 2011. On the surface, the piece is a humdrum run-through of the Taylor Swift origin story. It covers how she convinced her parents at age 11 to travel from Wyomissing, Pennsylvania, to Nashville so she could shop around her demo tape to record labels. At 13 she was gigging by herself in rock bars. At 14, she walked away from a development deal because the label wouldn’t let her record her own songs. Today, she runs her own management company and oversees every aspect of her career. She never reads her reviews, except for the time she was inspired to write the hit song “Mean” about how music critics are like bullies in spite of having precisely zero innate power over anything. Swift ultimately sees herself as a role model, and greets her fans at concerts with the thoroughness of Elvis at the Hilton casino in 1969, or Pope John Paul II on his ’79 American tour.

Clearly Lesley Stahl intended for viewers to accept this portrait at face value. But what was far more illuminating about Taylor Swift was the story’s subtext, which was, Why is she trying so goddamn hard? How does someone who should be smoking weed out of a pizza-roll box with her sorority pals have the wherewithal to run a business she founded that now grosses tens of millions of dollars? Who is this person really? In its own restlessly bases-covering way, Red answers these questions more completely than any previous Taylor Swift record.

Swift was already the biggest moneymaker in pop, but with Red she officially, and with great confidence, assumes pop music’s center — or the closest thing to a center that pop music can have these days. Impressively multifaceted and shamelessly mercenary, Red is an instant classic of instantaneous trendiness; if you want to know what matters in pop at this very moment in 2012, and possibly for two or three months before and after it, look no further. Red tells us that drops have been fully integrated into the pop song machine, and therefore rendered inert. Speaking of pop song machines, Max Martin still owns each and every brain that his hooks are allowed to infiltrate. As for indie rock, it’s not bad for a borrowed processed guitar sound or two, but it is most effectively deployed as a punchline for normal people. Red reflects all of these current realities, and will likely dictate several new ones.

Musically, Swift’s songs are a blank canvas. Arena rock, bubblegum EDM, sappy Britpop, twee Mumford/Lumineers-inspired folk, MOR singer-songwriter dirges, and, yes, even a dash of country — Swift pulls off all of it credibly on Red, and then some, without committing herself fully to a signature sound. Swift’s defining characteristic remains the chronic oversharing of her lyrics, but her genius is appearing to reveal more than she actually does. The no. 1 hit “We Are Never Ever Getting Back Together” quickly invited mass speculation about its possible inspiration, ex-beau Jake Gyllenhaal; the album cut “Starlight,” with its references to crashing a yacht party, is now doing the same regarding Swift’s current boyfriend, Conor Kennedy. Taylor Swift frequently depicts herself as a victim of romantic circumstance in her songs, but the person behind those songs — the one with strength and moxie beyond her years — is elusive.

An overachieving millennial to the end, Swift understands the Facebook era of pop music as well as anyone. You offer up just enough of yourself to look attractive, and allow your followers to fill in the rest. Utilize a flash of mall-punk guitar, and somebody will liken you to the riot grrrl movement. Sing a little about your love life over an acoustic strum, and you’ll be compared to Joni Mitchell. If you still need Taylor Swift to drop into an earnest twang and deliver a hard-luck country ballad like the knockout “All Too Well,” she can do that, too. For the first time, Swift’s appeal is no longer predicated on a myth that denies the unwavering acumen of the great self-made pop prodigy of our time. If Red is a triumph, it’s not the triumph of an ostensibly humble songstress who is victimized by John Mayer and waits on Kanye before she can finish speaking. It is the victorious declaration of a very clever girl who decided to take over the world in the fifth grade, and succeeded.

The great new ABC musical melodrama Nashville features Hayden Panettiere as a young, blonde superstar singer-songwriter with a taste for older men; the character’s sunny exterior hides an emotionally damaged and cynically conniving striver out to bump Connie Britton’s Reba-like country music matriarch out of the spotlight and off the charts. Panettiere has gone out of her way to deny that her character is based on Swift, which is probably true. But there’s also some truth in my favorite scene from the Nashville pilot — the part where Britton tells her record producer that Panettiere’s music is “adolescent crap” that “sounds like feral cats to me,” while a naked Panettiere fumes in bed in an adjoining room — that distills how Swift is perceived in some country-music circles.

Swift’s songs are “honest” depictions of her life, but she has never really tried to be a paragon of down-home authenticity, which was problematic when she was just a country singer. With Red, Swift embraces her revolving-door pop star transformations full-on. She’s been moving in this direction for a while now, though even 2010’s crossover smash Speak Now was heavy on Faith Hill–aping soccer-mom ballads. It’s telling that one of Red‘s big slow-dance numbers, “The Last Time,” is a duet with a guy from Coldplay also-rans Snow Patrol, rather than a Nashville-endorsed side of beef and flannel like Jason Aldean. More subtly, the banjo lick that opens the title track is quickly subsumed by alt-rock synths and surging guitars. When Swift sings, “Loving him is like driving a new Maserati down a dead-end street,” it’s hard not to miss the millionaire upgrade from the usual pickup-truck imagery of most country songs.

But where Swift really diverges from the Music Row script is on her collaborations with teen-pop magnate Max Martin, who co-engineered “We Are Never Ever Getting Back Together” and brings some Kelly Clarkson–goes–Skrillex mojo to “I Knew You Were Trouble” and “22.” Both “We Are Never … ” and “22” include self-deprecating references to “cool” indie records and “hipsters,” which are sly preemptive strikes against a subculture that Swift hasn’t yet conquered and that also sucks up to indie-weary music critics. (Swift doesn’t completely leave indie rockers in the dust; “The Lucky One” is a blatant knockoff of Rabbit Fur Coat–era Jenny Lewis.)

As canny as Swift is about courting audiences, Red succeeds because it is made up, at its core, of very well-written songs that have earned their place in America’s Walmarts, hair salons, and car mechanic waiting rooms. This is apparent when Swift is working in catchy cotton-candy pop mode, and also when she’s playing it straight as the serious songwriter, like on the impossibly lovely “Sad Beautiful Tragic.” At 16 songs, Red works a little too hard, but for an artist who is hell-bent on achieving the sort of mass pop stardom that no longer seems possible, you need as many gateways as you can get.

As much as I like the music on Red, I’m still drawn to the Taylor Swift that’s just below the surface, the Taylor who really makes it all happen. I don’t know what motivates her, or how she seems so preternaturally wise about making songs that are so good at being so popular. I’m dazzled by her ability, but also confounded. For all the talking she does about herself in her songs, Taylor Swift is a little remote, a fitting representative for a generation sharing everything with the world online in lieu of pursuing real-life intimacy. Millions will click “like” on Red, but to what end? I have no idea, but I’m not as smart as Taylor Swift.