Cursed: Yinz and Losses in Pittsburgh

Though Your Dreams Be Tossed and Blown 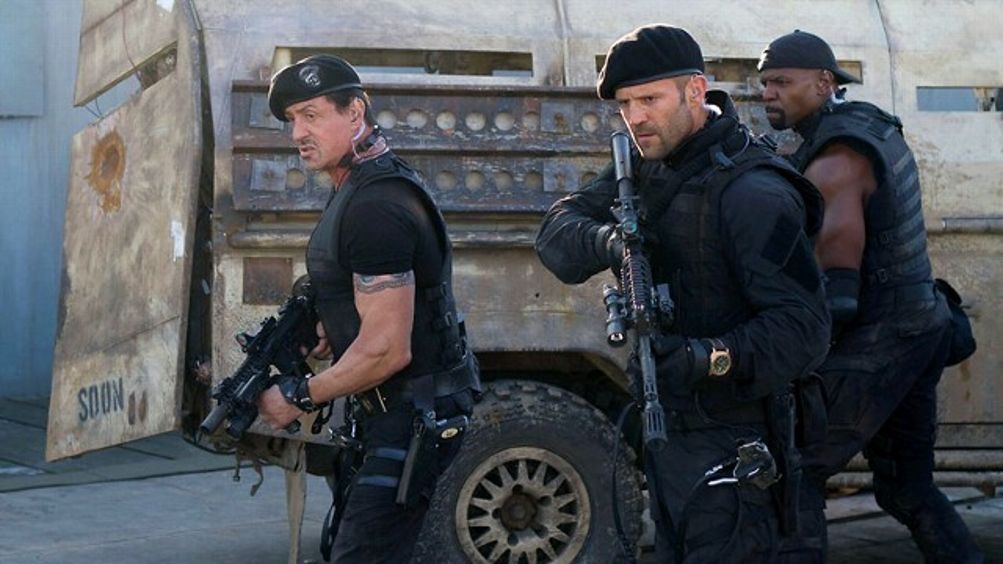 At the advance press screenings where the hunchbacked mole-people who review films for a living go to see movies slightly before the rest of the world — your correspondent here humbly raises his hand — prospective reviewers are handed production notes. In these notes are details about the cast, the crew, the locations. Actors and producers give comically flattering, it-was-just-a-pleasure-to-be-in-the-same-room-as-Jeremy type quotes about their fellow cast members; exclamation points are used in significant disproportion to their appearance in actual human speech. The idea is to give the rosiest possible narrative about the genesis of, say, Human Centipede 2: Full Sequence. The idea is not to open the trap door onto a pit of existential dread and ontological woe.

So it is something of a surprise to open the production notes to The Expendables 2, a sequel to Sylvester Stallone’s convocation-of-ancient-action-heroes 2010 original, to find a thoughtful essay in defense of the film’s existence. This treatise, which runs nine photocopied pages, is organized under the following headers: “The Endangered American Action Hero”; “Action Stars of the World Unite”; the plaintive “What Makes an Action Hero?”; and “Bulgarian Rhapsody.”1 It starts in retreat and gets darker from there; the first sentence reads: “In a 2012 article, the New York Times Magazine declared the American action hero an endangered species.” If you encountered this document in the wild, you might mistake it for the minutes of a self-help group convened by — well, let’s just quote here — “every single one of the larger-than-life personalities who built the great American action film as its own massive genre.” Which is basically what The Expendables 2 is.

The New York Times Magazine essay to which these production notes anxiously refer was written by Adam Sternbergh in March, and it looked rosily back on the spectacularly unselfconscious ’80s heyday of Willis, Schwarzenegger, and Stallone, ending with a plea: Contemporary American action films — CGI-riddled, cape-plagued, Vin Diesel–tainted — should make like the alternate, never-shown end of Rambo and beg for their own death.

Instead, the men who’d made the films Sternbergh hailed as the pinnacle of the genre banded together in 2010 to make The Expendables, in which Steve Austin gets punched in the face while on fire, and now The Expendables 2, a self-consciously old-school action film that doubles as an argument for the continuing existence of self-consciously old-school action films — i.e., the type of film that would never in one thousand bloody years come packaged with a meta-textual plea for its basic right to exist. Sylvester Stallone may run like a badly wounded polar bear these days, but his mental choke hold on the collective brain of theatergoers remains as firm and delightfully painful as ever.

Is it possible to make an entirely unselfconscious American action film in 2012? I posed this question back in March to Michael Bacall, the screenwriter and actor responsible for, among other things, 21 Jump Street, Project X, and Scott Pilgrim vs. the World. Bacall’s screenplays are what we’ve ended up with in the post–golden age action era — genre films, like 21 Jump Street and its predecessors Pineapple Express and The Other Guys, that constantly comment on their own genre tropes, even as they make a spectacle of enthusiastically obeying them. (Think of the chase scene in 21 Jump Street where Channing Tatum and Jonah Hill fire bullet after bullet into oil tankers and other likely-to-explode targets, then proceed to get into an argument about why nothing is blowing up.) Was it even possible in 2012 to make films like 21 Jump Street in a non-ironic way?

“The genre’s been around for decades now, and the conventions are familiar enough that I think everyone is in a place where they can have some fun with them,” Bacall said then. As for playing an action film straight, “I think you could do it. But it would have to be amazing. The action would have to absolutely blow your mind, the banter would have to be perfect, and it would have to have a really good story behind it.” He said he thought it would be tough, but “doable.”

The Expendables films are basically an attempt to answer this dare. Sylvester Stallone saw a world in which men like Ryan Reynolds could “Velcro their muscles on” and found it lacking. Latter-day action stars like Matt Damon’s Jason Bourne were paralyzed with self-consciousness. They wanted to do the right thing but didn’t know how. To Stallone, the right thing was graphically detaching the top half of your enemy from the bottom half of your enemy, then making a “rest in pieces” joke about it. Stallone’s castmate Dolph Lundren described the first Expendables, which also featured Jason Statham, Jet Li, a teary philosopher-poet Mickey Rourke, and Bruce Willis and Arnold Schwarzenegger in cameo roles, as “very down to earth” — which it was, if you count scenes shot in the reflection of a knife blade and emotional beats swung like carnival sledgehammers as “down to earth.” It was a movie of men who have trouble forming words. The dialogue played like weight-room Beckett. The bullet noises were so, so loud.

Even then, though, the film showed flickers of being self-aware. In one scene, Willis’s shady CIA boss obliquely quotes Pulp Fiction‘s Winston Wolf to Stallone and Schwarzenegger, a reference to a movie Willis was in, though not a character he played; shortly thereafter, Willis asks, regarding Schwarzenegger, “What’s his fucking problem?” Stallone responds: “He wants to be president.” The Expendables may have been a film about the sanctity of the frame, but Stallone couldn’t help breaking it.

The Expendables 2 is better than the first one. The action is less leaden, more kinetic, the explosion budget slightly higher. It brings in Jean-Claude Van Damme — who wouldn’t participate in the first one, according to Stallone, because he thought the film’s plot, which brought bloody war to Brazil, was socially irresponsible — as a sibilant, sunglasses-wearing villain with a goat symbol (Van Damme describes the animal as “the pet of Satan”) tattooed on his neck. Stallone launches a motorcycle into a helicopter in the film’s very first scene. Statham punches a man’s head into a different helicopter’s rotor. And Schwarzenegger, free of any pesky political obligations, returns to a more sizable role, game and lithe as a panther.

Another way in which The Expendables 2 is better is the degree to which it embraces its ridiculous premise — it’s a meta-movie about aging action stars and the many on- and offscreen lives they’ve lived. “If I don’t get this back,” a hulking Terry Crews says to Schwarzenegger, handing him a gigantic weapon, “your ass is terminated.” Chuck Norris cameos as Booker, a lone-wolf killer who recites Chuck Norris Facts and whose name is an homage to Norris’s John T. Booker in Good Guys Wear Black; every time Booker appears, Ennio Morricone’s score from The Good, the Bad, and the Ugly plays. Rambo, Die Hard, and The Terminator are all explicitly referenced. And when Dolph Lundgren’s PTSD-hounded Gunner Jensen relates his life story, it is pretty much identical to Lundgren’s own, down to the heady ’80s disco romance with Grace Jones. The most glaringly ironic thing about The Expendables 2, a movie that is basically a temple to the simple bloody sincerity of action films past, is that it can’t help but be ironic.

What makes an action hero? For starters, he probably shouldn’t walk around smirking about the fact that he’s an action hero. One reason these films likely feel so finished as an American art form is that the ones we make now so clearly yearn for — and explicitly reference — the ones we used to make. Films like the two Expendables or like Pineapple Express are funny genre spoofs, but they don’t really exist independently of the genre they’re spoofing; they depend upon an entire canon of other, already-made films for their narrative beats to work.2 The fatigue that accompanies many modern action films is real: We have, in fact, seen this before.

The Expendables 2 is campy, enjoyable, at times even outright funny. But it also makes you wonder what would’ve happened if they’d played it straight — Stallone and Willis and all the rest of them, chopping hands off with a righteous fury, never pausing to acknowledge that they know how old they are or how ridiculous they look. It would probably be terrible; maybe it would be avant-garde. But at least it would be new.

A certain kind of knowing irony is pretty close to our collective cultural voice at the moment. But it is not a flattering tone for action films like The Expendables, which are meant to work bloody and up close, and don’t do so well at a remove. It’s a genre that depends on thrills we’d be ashamed of fully owning when the lights came up — think of Expendables star Jason Statham in Crank: High Voltage, having vigorous sex with Amy Smart on a racetrack in front of thousands of people so as not to die. The Bourne franchise may have struck Stallone and his muscular cohort as effete and needlessly anguished, but it at least had a certain earnest, self-contained sincerity on its side — a virtue The Expendables 2 makes a point of worshipping but doesn’t actually possess. Maybe what you need to do to make an old-school action film in 2012 is forget for a moment that you’re making one at all.