Cinemetrics: Denzel Does It Again

Championship parades can be quite bittersweet. They’re like graduations, or weddings, or having a big fun group of houseguests: You spend so much time and effort just to get there, and then even more to get through, and then — just like that — it’s all over. Everyone disassembles and goes their own way, and you know that the next time you talk about the event it will be out of some sense of hopeless nostalgia. Perhaps Giants fans sensed this: In the picture above, they sure don’t look like they even know their team won the World Series.

Or maybe all those fans are just super exhausted from their wild ride, because championship parades — and the championships that precede them — are a hell of a lot of fun while they last. Yesterday San Francisco played host to its second such parade in three years, this time celebrating the Giants’ World Series sweep over the Detroit Tigers.

Everyone’s orange-and-black attire was perfectly Halloween-appropriate, and while it was a cloudy day, the vibe was bright. Below are some photos of the parade and the many wonderful oddballs who attended. 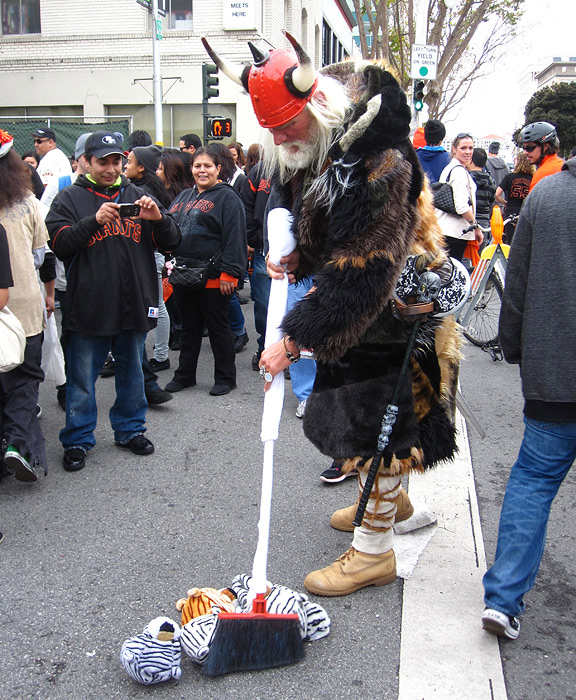 There were a multitude of brooms to be found at the parade — the mayor of San Francisco even presented the Giants with a “Broom to the City” — but this man’s variation on the theme really went above and beyond. I hope he wore that same outfit when he went into Toys “R” Us to buy the little stuffed tigers. 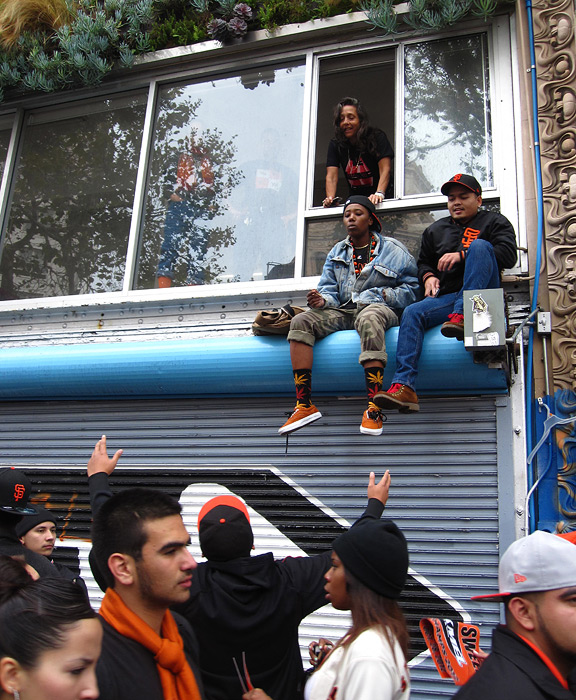 As I walked up Market Street to find a place to stand before the parade began, two people somehow scrambled up on top of a storefront gate, and a lady watching from inside the building above opened the window and began yelling at them to get down or else. Not only did they completely ignore her, the one in the marijuana-leaf socks immediately and defiantly sparked up a joint then and there. “I’m calling the cops in five minutes!” the woman warned, to the great amusement of a man down on the sidewalk who had been watching the whole thing. He couldn’t resist. “Hey lady!” he yelled up to her. “The cops don’t give a fuck!” 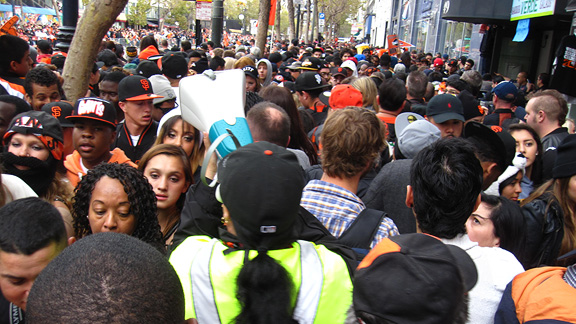 Considering this pre-parade scene — the closest I felt to getting trampled today — the cops (or the various other iterations of security officials on hand) probably just would have been happy to see that those two kids weren’t clogging the sidewalk. 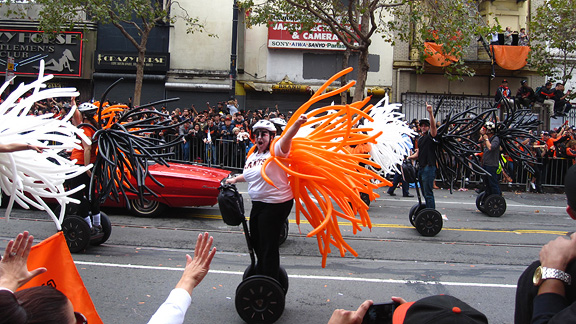 Is there a concise term for “hype men (and women) wearing porcupine-y balloon spikes and tooling around on Segways”? I have to imagine that these people are innocent tourists who signed up for the guided tour of Golden Gate Park and got rerouted over here at the last minute. 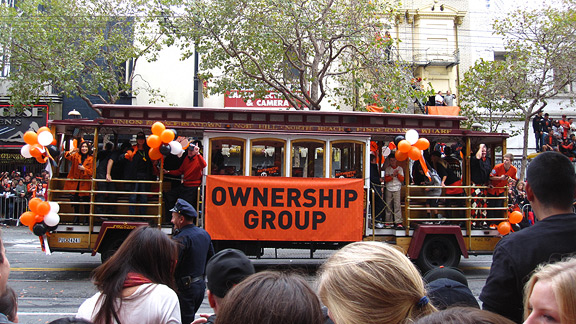 Before the players came through, riding in the backs of convertibles, various other groups of team personnel — from the ownership families to the concessions workers — got their turn in the spotlight. But the natives in the crowd were beginning to get restless as each minute passed without a sighting of Marco Scutaro or Matt Cain. One girl near me began openly shouting “We don’t care about you!” at all the floats that drifted by. When a trolley carrying the Giants’ trainers and medical staff went past, she did it again, and this time the man in front of her whipped around. “They fixed Buster Posey!” he said, impassioned. 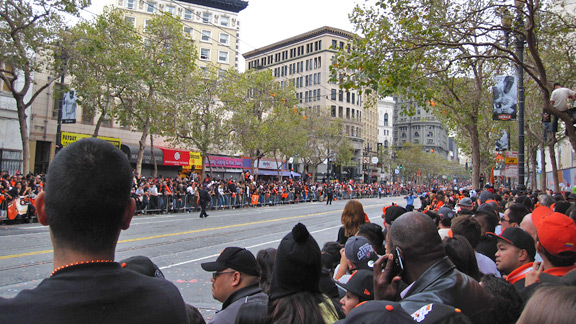 More waiting. (This photo was taken in the middle of the parade, during a long lull.) “Where are the players?” someone asked; I think it might even have been the same girl as before. “Right here!” yelled a funnyman. “Ohh, you mean the baseball players!” He sounded like he’d been guarding that gem for a while. 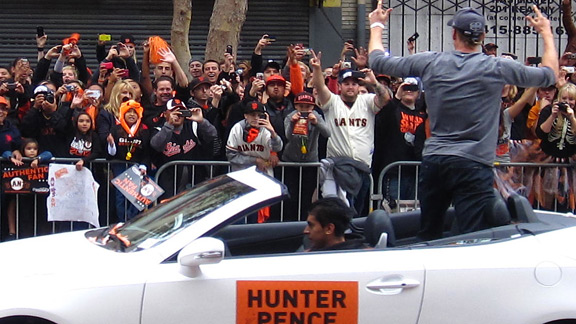 At last, the actual team began to roll in. I have about 6,000 nearly identical pictures of each convertible carrying each guy (manager Bruce Bochy got the best one, a Rolls-Royce) but none of them are particularly good; it’s a little bit like visiting Yellowstone and coming home with a whole memory card’s worth of cloudy pools of water and blurry elk grazing in the middle distance. You swear it was all way more vibrant in person. 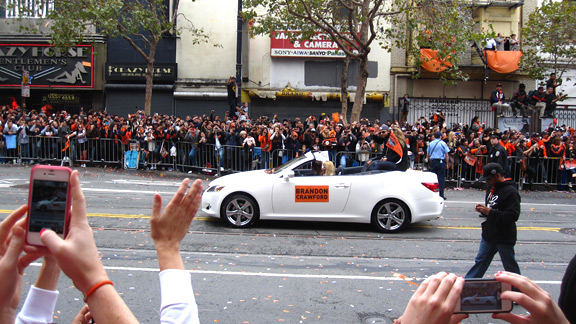 See what I mean? (Also, just as Yellowstone has lots of horses, the Giants victory parade had as its backdrop the Crazy Horse Gentlemen’s Club.) It’s fitting that this picture captures the phone screens of a few other people taking the same picture, because Brandon Crawford happens to be the most meta player on the Giants: If you haven’t already seen this picture of him as a youngster SF fan that ran in the Chronicle in 1992, get ready for your cold hearts to melt. 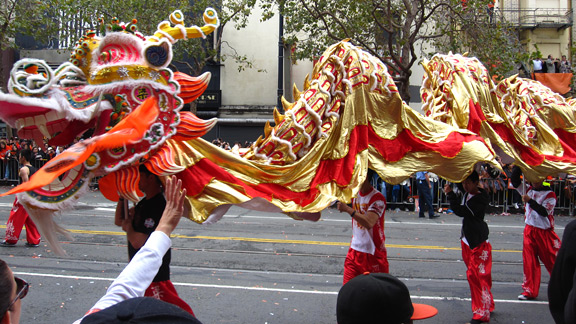 The dragon float in the parade had much better luck getting applause than San Francisco Mayor Edwin Lee did when he delivered this big line at the Civic Center: “This! Is the year! Of the ORANGE DRAGON!” Really, the only thing preventing the crowd from falling into complete crickets-silence was its collective murmur of ” … wha?”