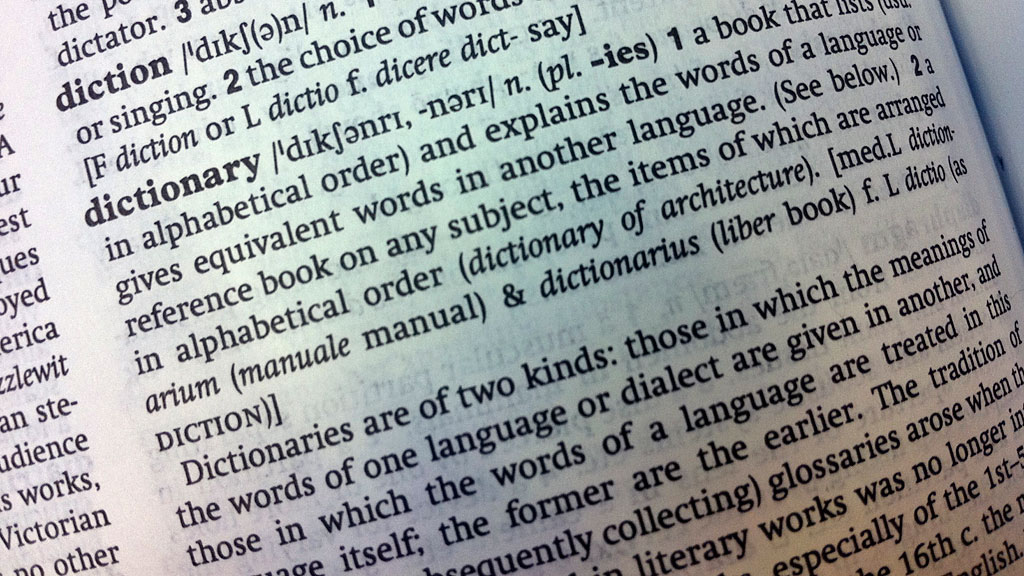 Welcome to Grantland’s college basketball dictionary, an A-to-Z guide of all the terms and phrases you need to know. It’s the lexicon of the amateur hard court — a vernacular sure to make you a hit with all your hoopster buddies.

air ball (n.) — a shot that fails to hit any part of the basket, allowing people like you and me to shame physically superior humans with a droning chant.

“Attack the rim!” (exp.) — command shouted by announcers at any point guard who won’t charge heedlessly into the lane to throw up an off-balance shot or aid the defense in drawing a charge.

backdoor cut (n.) — really annoying tactical maneuver executed by Ivy League types when they could be attempting a sick dunk or crazy turnaround 3 instead.

center (n.) — near-obsolete position manned by tall people who believe they are entitled to automatic foul calls because of their size. Centers typically spend 10 to 12 minutes complaining to referees before becoming fatigued and asking to be removed from the game. They have spent whole lifetimes playing a sport with, like, three different skills, but have yet to learn how to dribble or make a shot outside of five feet.

Craft, Aaron (n.) — semi-mythical figure who has endured in college basketball lore for decades. The first reported sighting came in 1894, when he was allegedly spotted taking a charge for the Chimney Rock Wagoneers of the New Territories Conference. Recent rumors place him as a point guard at Ohio State. Will never graduate. Or age. 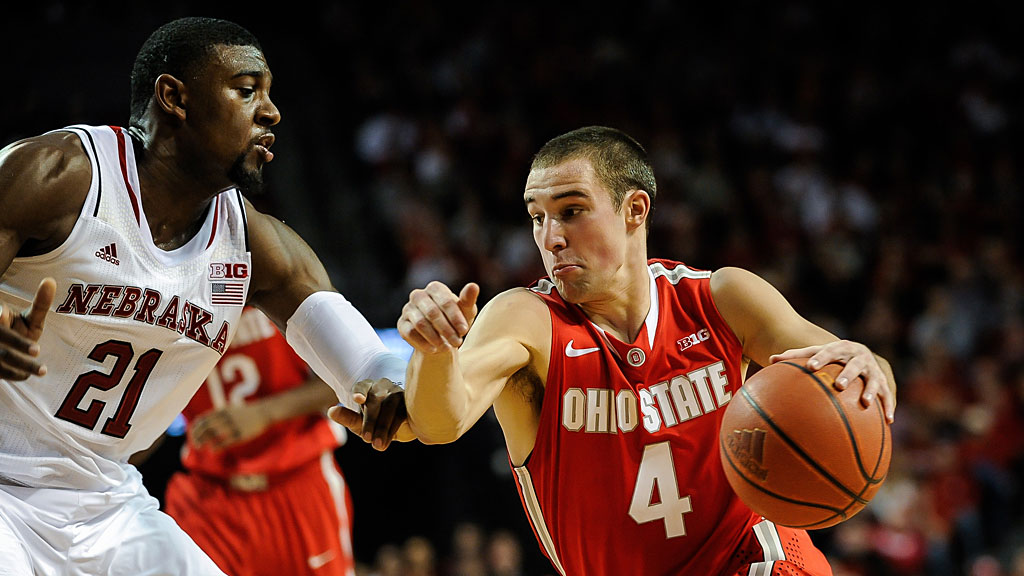 dime (n.) — slang term for an assist. Also slang for a 10-year stint in prison, the current NCAA penalty for receiving illegal lunch money from an aunt or uncle.

double dribble (n.) — violation in which a player dribbles the ball with two hands at the same time or dribbles, stops dribbling, and dribbles again. Since 2000, 94 percent of all NCAA double-dribbling violations have been committed by a member of the Plumlee family.

electric (adj.) — the atmosphere inside every college basketball arena for any home game, ever, according to announcers. Also used to describe the sensation of being stared at for longer than three seconds by Illinois coach and noted extraterrestrial John Groce.

Euroleague (n.) — European league for a sport played on a basketball court, but with constant flopping, longer hair, and games that end in scoreless draws. An occasional destination for high school graduates who want to greedily circumvent bizarre labor laws and actually make money for their talent.

fast break (n., obsolete) — concept whereby players try to score in transition after a defensive rebound before the other team has a chance to recover. No longer practiced at the college level. Punishable by death in the state of Wisconsin. 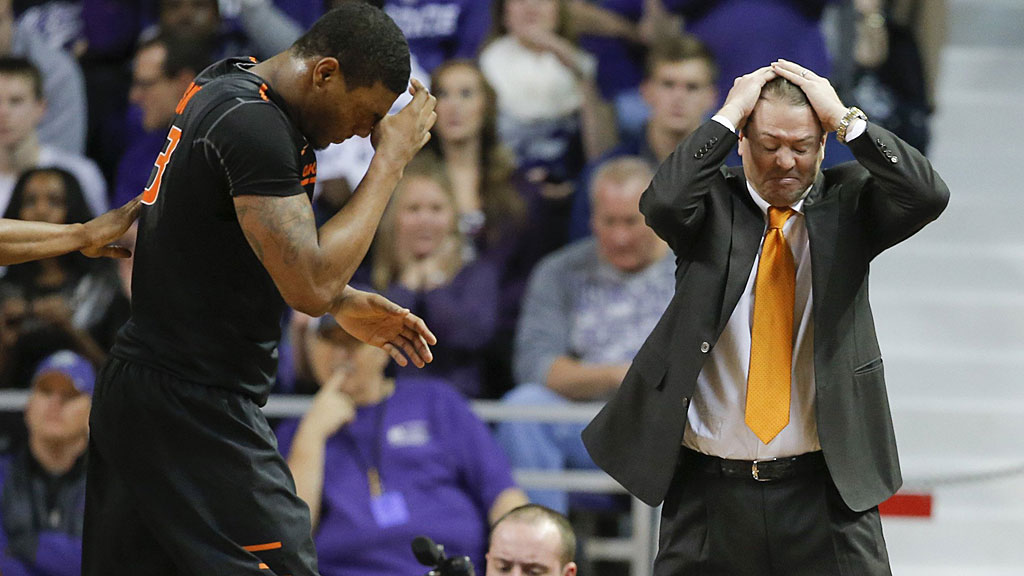 forward (n.) — direction in which most offenses choose to move when attempting to score. Not applicable in Wisconsin.

granny shot (n.) — type of underhanded free throw taken by Ollie in the film Hoosiers, or any shot taken by former Florida Gator Joakim Noah, the player who looked most like an actual grandmother during his collegiate career. 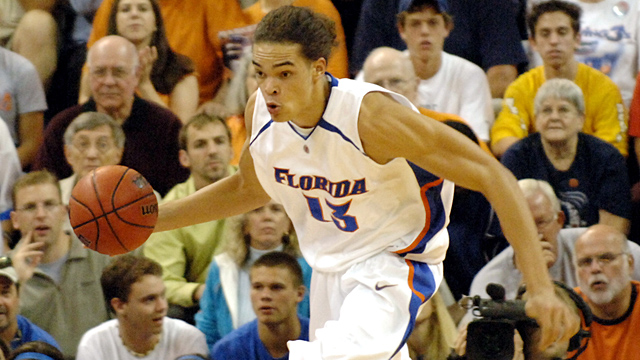 “Heat check!” (exp.) — slang term I shout when I take a half-court hook shot in a pickup game after having made a layup on the previous possession.

ice (n.) — frozen water, used to denote either a player who has missed a series of shots (“ice cold”) or one who performs well under pressure (“ice in his veins”). (See also: Gervin, George — retired player known by the nickname “Iceman,” due to his penchant for spitting ice cubes on the floor when he disagreed with a call.)

in-and-out (exp.) — phrase used to describe a ball that nearly goes in the basket before popping out. According to sources in Bloomington, Indiana, it is impossible not to experience a full-body shudder when you hear Tom Crean utter these words with that face … that face … oh God, that sweaty, awful face.

Izzo (n.) — Italian word, roughly translated as: “A coach who — regardless of debilitating injuries, lack of talent, or a punishing regular-season schedule — reaches the Final Four and makes Calipari look like a real asshole.” 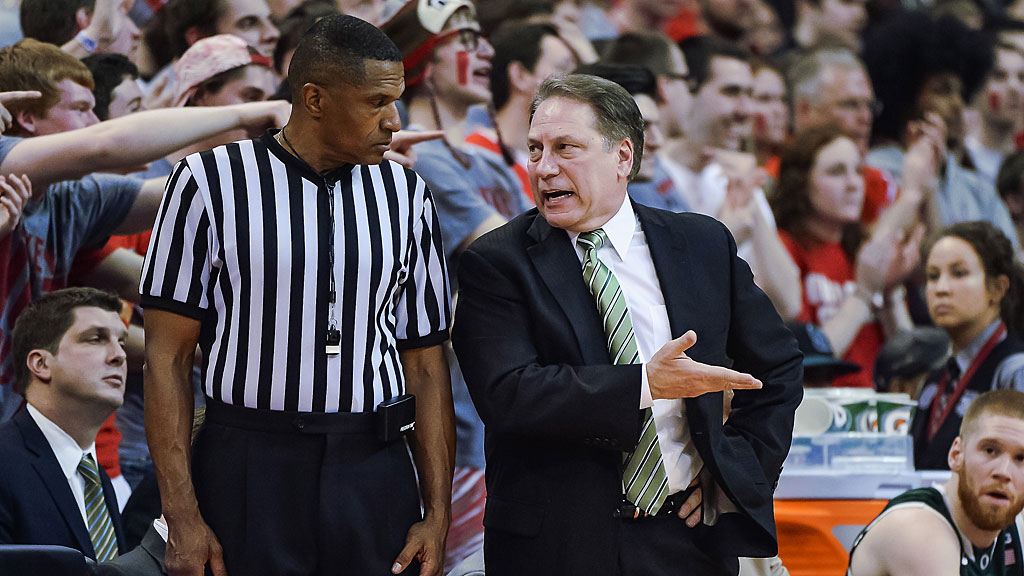 kicking (n.) — violation called when a player intentionally strikes the ball with his or her foot. Also a popular major among UNC basketball players.

layup (n.) — shot that continues to curse members of the Plumlee family.

“Money!” (exp.) — another slang term I shout when attempting a half-court hook shot in a pickup game.

NCAA (n.) — term used in anger by Kentucky players when they suit up for their first game. As in: “Wait a second … I’m playing in the fucking NCAA?”

offensive foul (n.) — in the college game, any foul that occurs inside the painted area.

over-and-back (n.) — violation that never actually occurs, because players just follow the ball until it rolls out of bounds in the off chance that something weird will happen, like an earthquake that tilts the court.

palming (v., obsolete) — a former violation, at least according to a lot of angry old guys who apparently dribbled using only their palms, like Stanley from The Office.

pivot foot (n.) — the foot on which a player is allowed to turn in a circle without being called for a travel. UNC alum Tyler Hansbrough still holds the NCAA record for pivot feet, with four.

quickness (n.) — an indispensable quality in a Division I player, the lack of which is the reason I’m writing goddamn blog posts for a living instead of telling you all go to f— yourselves from behind a podium after dropping 30 on UNC.

rock (n.) — slang term for the basketball, to be used when you want to sound like an out-of-touch asshole.

Shabazz (n.) — first name of a talented University of Connecticut guard who has become highly irksome to Shabazz the Ethereal, a magician who has now been relegated to page 14 in Google search results.

“storming the court” (exp.) — harmless, celebratory activity enjoyed by college students following a significant victory. Considered a criminal offense by many members of the sports media, especially those suffering from adult diaper rash. 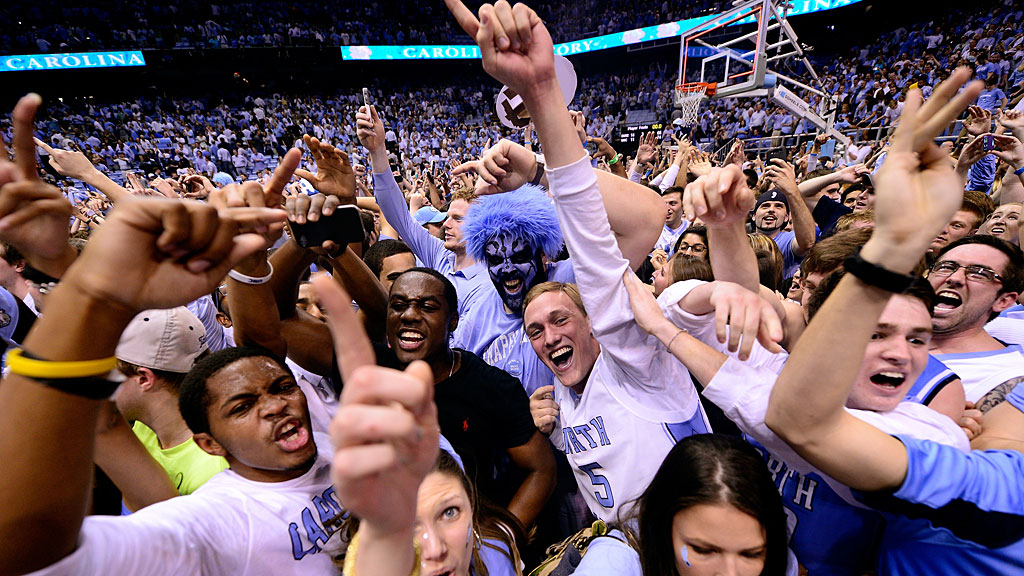 up-and-down (n.) — violation committed when a player jumps up in the air and back down while holding the ball, and from which North Carolina center Kennedy Meeks has total immunity.

ups (n.) — leaping ability, or the only American company that traveled more than the Zeller brothers between 2008 and 2013.

V-cut (n.) — sharp movement players use to free themselves for a pass. Also, the kind of T-shirt it would be hilarious to see Notre Dame coach Mike Brey wear, just once.

ventriloquism (n.) — act by which John Calipari makes his players sound like they care about the University of Kentucky as anything more than a very brief stopping point on the way to making millions of dollars.

“Walk!” (n.) — another thing old men yell all the time, in reference to a traveling violation. Players are now allowed to take seven consecutive steps without dribbling when approaching the basket, but will still be whistled for traveling if they attempt an awkward-looking jab step on the perimeter.

Wichita State (n.) — living proof that you can literally be perfect and still not meet the rigorous standards set by the more courageous members of the sports media.

wind (n.) — weather element that makes basketball hard to play, apparently, when you have the brilliant idea of holding a game on a FUCKING BOAT.

xylophone (n.) — name of a class taken by 96 percent of Division I basketball players last year.

yap (n.) — sound made by Cincinnati coach Mick Cronin when he yells from the sideline. 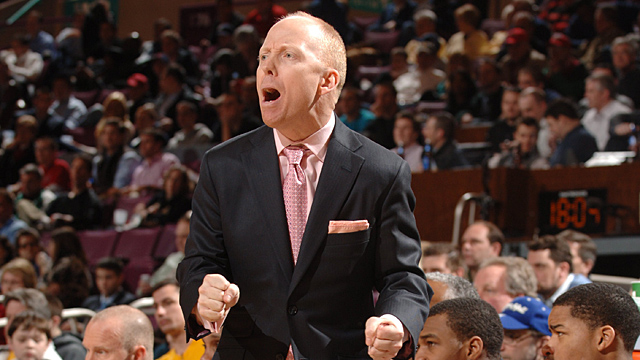 Yellowstone National Park (n.) — birthplace of basketball for those who, like me, are uncomfortable with the idea that the sport was invented by a Canadian.

zebra (n.) — one of the few slang terms for an official that is not wildly offensive or explicitly violent. Rarely used.

zone (n.) — type of defense taught by Syracuse coach Jim Boeheim, though he uses man-to-man exclusively when picking his nose.