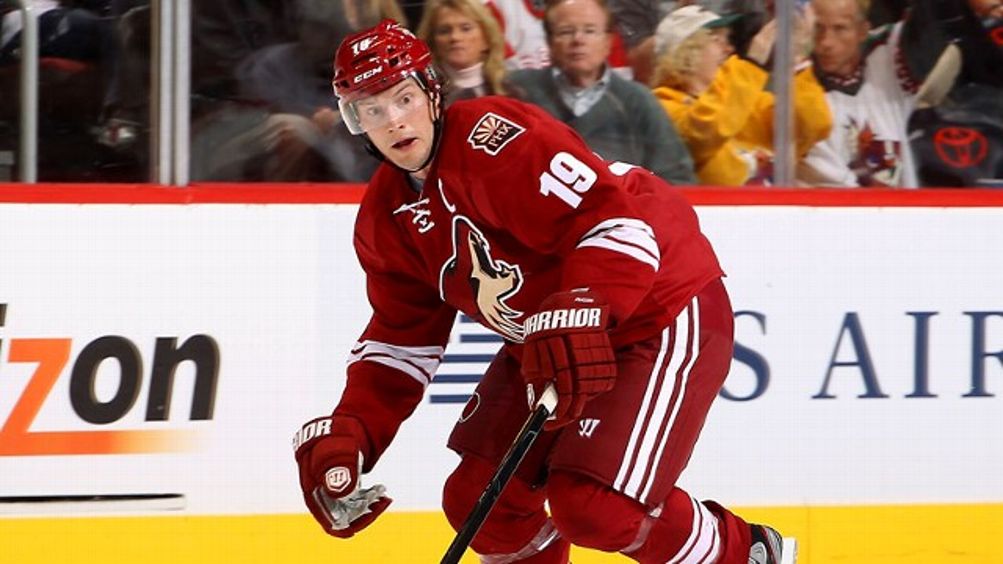 The trade speculation began flying before the Phoenix Coyotes had even played their first game this fall. “It’s the perfect recipe for a trade rumor,” wrote Paola Boivin in the Arizona Republic on October 3. “A star player in the final year of his contract. An unstable franchise. Already, national publications have speculated on the scenario: Shane Doan will be bait at the trade deadline.

“Not so fast, hockey fans,” Boivin continued, adding that both Doan and GM Don Maloney had shot down the idea to the media a few days earlier. Doan, who has been with the franchise for the entirety of his 1,179-game career (he was originally drafted when it was still the Winnipeg Jets), felt the team was good enough to make a run for the playoffs and didn’t see why he’d leave to try to do it somewhere else. After all, they made the postseason last year.

Since making the postseason, though, where they were swept 4-0 by Detroit anyway, the Coyotes lost a trio of centers as well as their no. 1 goaltender Ilya Bryzgalov to free agency, then had to deal with a distracting holdout from forward Kyle Turris to start out the season. And with the bankrupt and ownerless Coyotes the ward of the league, the team had an additional disadvantage: a strict budget that was gatekept by the NHL itself. The chorus arose: Free Shane Doan! Rent out Ray Whitney! By February 3, the Coyotes were crippled with injuries, in 12th place in the Western Conference, and, one assumed, close to having to do something drastic.

When the Coyotes did make a trade yesterday, days away from Monday’s deadline, it wasn’t to clean house or to offer a Cup run with another team to a beloved lifer. Instead, it was this: Phoenix sent a backup goaltender and a second- and fifth-round draft pick to the Columbus Blue Jackets — another team whose big-name players, Rick Nash and Jeff Carter, have been surfacing in all kinds of trade rumors all season — in exchange for center Antoine Vermette.

The trade may not have been much of a blockbuster, and the players exchanged weren’t exactly the ones who’d had everyone mindlessly chattering for months. But it was quite an illuminating transaction. For one thing, the Coyotes no longer needed to hold a fire sale. Since the All-Star break, they’ve gone 8-1-1, are back in seventh place in the West, and are breathing down the necks of the San Jose Sharks for the Pacific division lead. They’ve moved from assumed deadline sellers to methodical buyers just as quietly as their leading scorer, Radim Vrbata, has climbed up the league’s goal-scoring charts this season. (Vrbata is one of just five players to have hit the 30-goal mark, the others being Steven Stamkos, Evgeni Malkin, Phil Kessel, and James Neal. Not bad company! And what’s more, a full third of them have been game-winning goals.)1

Of course, when you’re the Coyotes, even being a buyer ain’t easy, what with the meager allowance afforded by the league. Unable to go for the splashy names, Don Maloney has instead had to scour for players that will fit into coach Dave Tippett’s system without breaking the bank. In Vermette, who scored a career-high 65 points two seasons ago, Maloney feels that he found one.

That hadn’t been the case with Turris. “We clearly differed on his game,” Maloney said of the disgruntled forward, who held out until late November. “We thought he would be better suited lower down in the lineup, and he didn’t think so.” And so off went Turris to the Ottawa Senators, with the Coyotes getting defenseman David Rundblad and a second-round pick in return. It was the same second-round pick that Maloney shipped to Columbus yesterday for Vermette, turning a once-toxic situation into the beginnings of a one red paperclip story.

Maloney, of course, hasn’t done this alone — lots of credit is owed to Tippett, who has done a phenomenal job, and other members of the staff like Sean Burke, the goalie coach who has helped Mike Smith have his own breakout season. The example of players like Doan and Whitney in an otherwise pretty young locker room has been invaluable, too. But Maloney now has a proven track record of finding not just talent, but talent that fits. (Before arriving in Phoenix in 2007, he helped draft and develop guys like Brandon Dubinsky, Marc Staal, Ryan Callahan, and Henrik Lundqvist as an assistant GM of the Rangers.)

It must be a little embarrassing for certain other GMs, the types who reign over bloated spend-all-the-way-to-the-cap teams that turn out to be duds, to see Maloney in action, particularly when he’s operating with one arm tied behind his back in Arizona. He’s been doing for the Coyotes what Donnie Walsh did for the Knicks — cleaning up the mess — but he’s done so without the carrot of a Push for LeBron or a Settle for Amar’e in front of him. This is all he’s got to work with, and he has, and he does. He’s already earned one GM of the Year award, the first ever given out, in 2010, and the way he continues to operate suggests he may yet pick up a few more.

After losing seven straight games on either end of the All-Star Break, the Ottawa Senators have gone 5-0-1 in their last six — and what’s more, they’ve outscored their opponents 29-10 during that stretch. (They’ve won their last four games 4-0, 6-2, 6-0, and 5-2.) They’re now in seventh place in the Eastern Conference and just two points back from the Northeast division-leading Bruins — although it should be noted that Boston has played four fewer games.

Three players have been pivotal during the run, one being goaltender Craig Anderson, who has had two shutouts in his last four starts. The other two Senators, ascendant defenseman Erik Karlsson2 and playmaking center Jason Spezza, have been hard at work making opposing goalies miserable. Both players are on nice little point streaks — Karlsson has put up 12 points over the last five games, while Spezza has earned 14 in seven — and the two combined to score goals just 27 seconds apart in a complete trouncing of the Islanders on Monday.

(Spezza also added this impossible rip to extend the lead to 6-0 in the third period of that game.)

In other news, Jeff Carter scored his second hat trick of the season; Rick Nash was no slouch himself; Petr Sykora polished off a pretty pass from Adam Henrique; and Evgeni Malkin makes it look simple to score on Lundqvist.

Piling On the Pylons: The Week’s Worst Performers

I’ve run out of things to say about the Capitals. (Though Justin Bourne’s frame-by-frame pictures are worth many thousands of words.) Nicklas Backstrom continues to be out with a concussion. Alex Ovechkin has been sidelined this week for reasons that have variously been identified as an “equipment issue,” a “lower body injury,” and, per Ovechkin himself on Wednesday morning, “It’s not injury. Just regular stuff.” The team’s goaltending situation has gone from shaky to totally shaken. Things overall have gotten so bad in Washington that now even their goal scoring is wreathed in agony:

Really, the only thing Washington has going for it at the moment is its placement in the NHL’s weakest division, the Southeast. For all the troubles they’ve had this season, the Capitals are still somehow just two points behind Florida and Winnipeg for the automatic third overall playoff seed. (With the insanity that is the MTS Centre rink and saves like this from Ondrej Pavelec, the Jets sure would be a tough team to have to face on the road in the first round.) Over a quarter of the Caps’ remaining games are within the Southeast; they’ll play Carolina and Florida once more this season, and face Tampa and Winnipeg twice. And the Jets will play Tampa tonight in a game that could further muddle the divisional waters — a Lightning win would boost them to being only a point behind Washington.