The 30: Running for Their Lives 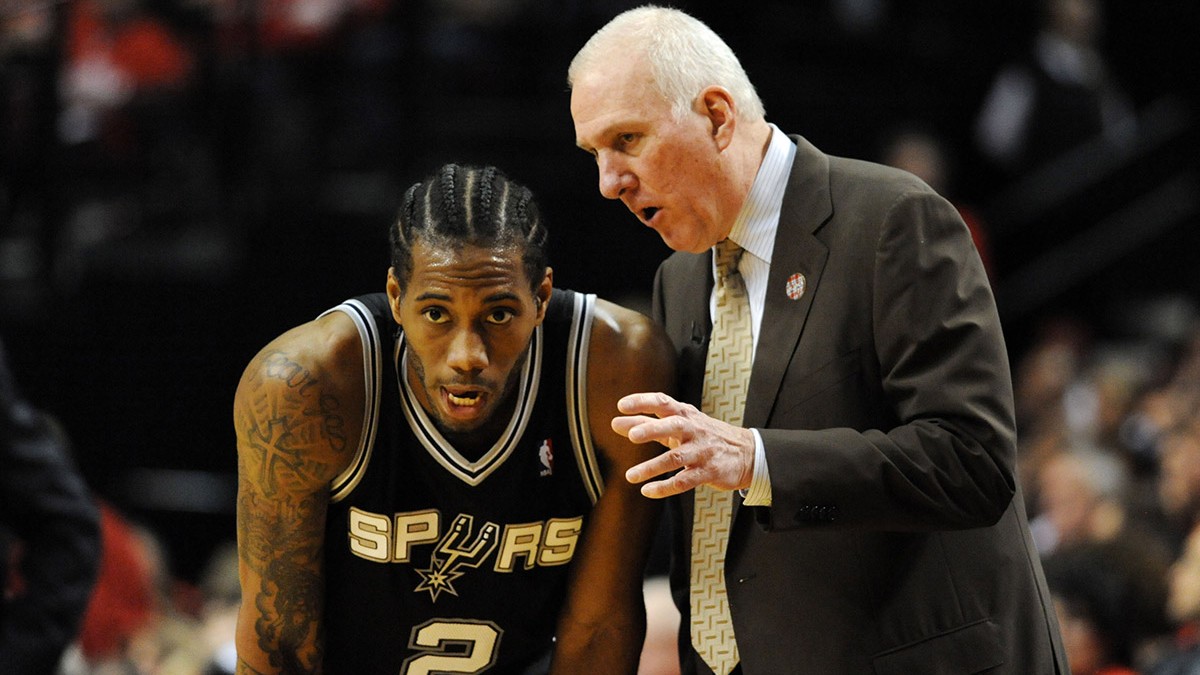 What makes a basketball team good? The obvious answer is the ability to win. But winning decides which team is better in any given game, a question that’s not quite the same.

The Spurs are a very, very good basketball team. What makes them so good? One answer involves the brilliance of Tony Parker, the consistency of Tim Duncan, the creativity of Manu Ginobili, the production of the bench, the foresight of R.C. Buford, the genius of Pop. Another discusses ball movement, screens, advanced metrics, sound defense, and mid-game adjustments. Others reach for metaphors or abstractions, language about systems, roles, and well-oiled machines; or selflessness, craft, and commitment. For starters, though, let’s talk about Kawhi Leonard’s feet.

His feet look unassuming. They are more or less like other players’ feet: size 14, with gnarly nails and small nubs on top of his toes. The corns are the normal cost of what he puts himself through. Leonard’s work ethic makes even his teammates, famous for their discipline, shake their heads. He punishes his feet, and we call the punishment footwork.

His footwork lets him mimic the man he’s defending and turns him into a shadow his target can’t shake. It lets him run around screens and into lanes. It balances him while he sweeps in a long arm and swipes the ball on the run. This year, he ranked 10th in the NBA in steals per game — a stat that may be worth more than commonly thought. He shot more than 50 percent from the floor and showed flashes of becoming a bigger scoring threat. The potential is there. He can hit 3s, drive, get in transition and run. He is an adaptation, part of the Spurs’ intelligent design — evolution, Texas-style. Leonard was 5 years old when Duncan was drafted. What he does is different — he’s unpredictable and rangy. Sometimes he seems to hold himself back. When he’s unleashed, he’s a little wild. In Game 2 of the Spurs’ second-round playoff series against the Blazers, he would cut, feint, run, suddenly stop, pull up, and shoot — hitting eight of nine, including four of four 3s. You’d hardly know what was happening before the ball was up, a soft shot along a low arc.

It’s the way he stops — his feet. Whoever calls this boring isn’t watching. “Sometimes I feel like I did when Manu first came along — not quite sure exactly what’s going to happen,” Popovich said later. Manu himself calls some of Leonard’s drives “Whi plays.” At times, he’ll take “why” shots — midrange jumpers or quick-triggered, muscling drives. But he has a sense for the occasion. He creates space and puts himself in simple situations, spots where he can catch and kick out for a 3.

Off the court he is quiet, almost silent. After Game 2, he was the last to get dressed, as if he could outwait the press. The locker room was almost empty. A knot of reporters stood around Tiago Splitter; Patty Mills floated by and then vanished. Leonard sat in front of his locker with his legs stretched out, a towel wrapped around his waist and Ace bandages holding ice to his knees. Water dripped from his incredible feet. With a sound somewhere between a snort and a sigh, Leonard unwrapped the bandages from his knees and got dressed. The reporters closed in around him, thrusting tape recorders and microphones on booms and cameras high toward his face. He pulled back his head to button his collar. He spoke so softly that it was impossible to hear him from only a few feet away. What he does is listen. Look at the court during a break in the game, and you’ll probably see him off to the side, head down, with a coach or an older player. It’s been said that the Spurs won’t win a championship unless Leonard becomes more than a role player, more than a guy who snags rebounds and sneaks steals — that he needs to be a star in his own right. But it makes no sense to think about him in isolation.

Leonard and Parker have talked before each game, discussing what Portland’s defenses would look like. If Leonard was more aggressive in Game 2, it was partly because he expected to have openings. He knew that Portland, having been pulverized by Parker in Game 1, was going to focus on taking away the point guard’s shots. The truth is, when we talk about Leonard, we’re also talking about Parker. 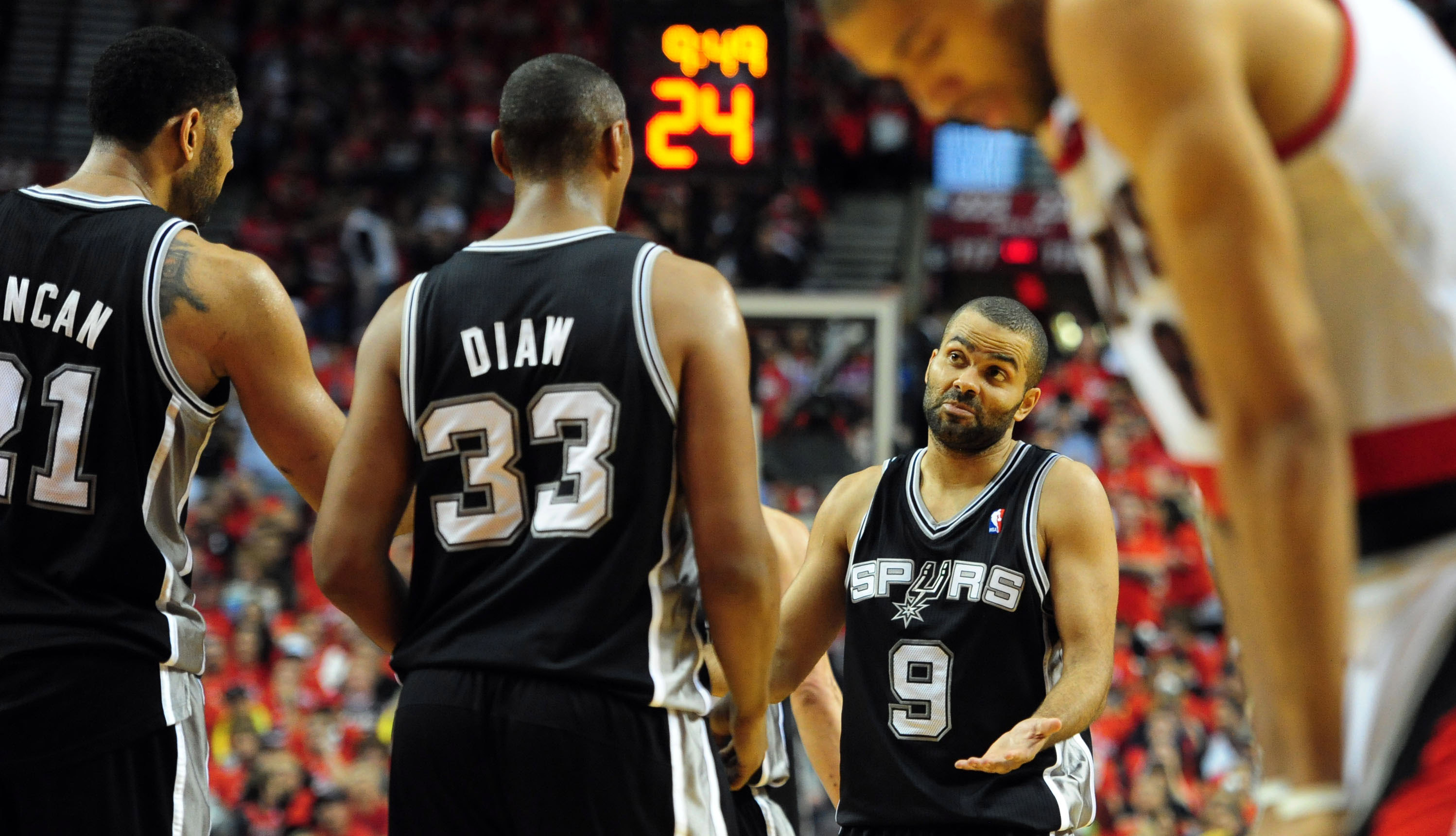 Parker barely played in April. Pop rested him so often, he jokes, that he wasn’t sure whether he was still on the team. In the first few games against Dallas, he’d struggled. The Mavericks were stifling him, taking away the 3s and shading into his favorite passing lanes. They dared him to be the kind of point guard he used to be. They forced him to use his speed and attack the basket himself. In Game 7 he did, and he humiliated them. He has not stopped.

Parker is not as flat-out fast as he once was, but speed is a relative thing. It doesn’t matter what time he can clock in a 100-meter dash. It matters whether defenders keep up. Against Dallas in Game 7 and then against Portland, Parker hesitated, accelerated, sprinted, and slowed. He bent his back to float the ball over his shoulder. He jetéd around the rim. He flicked, floated, and spun.

It’s catch-your-breath beautiful, but the beauty is secondary to the action. He spins because spinning is the safest, quickest way from point A to point B. He turns for the shot because the shot is there. He directs the dazzling cycle of screens because he wants to set free a shooter. The aesthetics are the spandrels of his game. But that doesn’t make it any less beautiful.

Compliment his style of play and he’ll talk about his teammates’ screens. It’s reflexive and deflecting, but also not wrong. When we talk about Parker, we’re also talking about Tim Duncan.

The third game of the series, in Portland, was supposed to be tougher. The Blazers have played well against the Spurs in the past — in fact have the best head-to-head record of any team in recent history. And yet the Spurs went into the half leading 60-40. Small runs late in the game closed the lead, but it’s hard to dig out of Vesuvius. The crowd noise would grow and some fragile feeling, something like hope, would float up. Then Duncan would drop in a layup and, wide-eyed, draw the foul. There is a casual efficiency to this greatness, a kind of afterthought quality. What you remember is LaMarcus Aldridge’s jumper — and then you look at the scoreboard, and somehow the Spurs’ lead is again 18. Even Parker’s most incredible drives were evanescent; after Game 3, they seemed less like memories than dreams.

The Blazers’ GM, Neil Olshey, has said that what it means to be successful is to reach the second round. “Once you’re there, a bounce of the ball, health, chemistry, matchups — all those little things come into play once you’re in the final eight.” That seems like a reasonable goal for a team that hasn’t won a playoff series since 2000. The problem is, they’re playing a team that has made the second round of the playoffs in 16 out of the last 20 seasons. And when the Spurs are playing well, they don’t let the little things out of their control.

The Spurs have to do everything right because if they don’t, they’ll lose in Round 1 to the eighth seed. A series of small mistakes can become 24 turnovers. The Spurs were the best team during the regular season, but they are not the same team now that they were a month ago. I asked Popovich if that transition might even help explain some of their trouble against Dallas. “We were a little discombobulated down the stretch in the regular season because of schedule and resting a few players,” he said. “The rotations weren’t there in the last week, week and a half of the season. Then you start up again come playoff time. It took us a while just to adjust to that, I think … By the time we played seven games, we were back to the rhythm that we were used to. In a way, we were more ready to play against Portland than we were against Dallas.”

They need their rhythm because the rhythm means ball movement, the connection of part to part. The rhythm means trust. They don’t have a shotmaker like Aldridge or a force like Damian Lillard. They appeal to your head. They don’t have a guy who will steal your heart. What they have is better; what they have is Tony Parker. And when you talk about Tony Parker, you talk about everyone else. Integrity can mean honesty. But it can also mean soundness, consistency. It can refer to the way a structure is built. The individual becomes the culture and the culture the individual. It becomes hard to deconstruct.

There are snakes in the visiting locker room and bats in the arena, rodeo banners hung from the rafters, and doors that lock unexpectedly, turning stairwells into traps. Some people keep waiting on the structure to fall. Every year, there are people who say the Spurs can’t keep winning.

There’s an old oak in the Alamo, a massive tree with a trunk that seems to separate into several trunks, heavy branches that curve toward the ground. It’s a single tree that seems made up of several trees. Next to it is a sign: “In the early part of the twentieth century, many San Antonio residents believed it was impossible to transplant full-grown trees.Walter Whall — a retired English seaman — started San Antonio’s first tree moving company and proved it could be done.” Pop is a retired English seaman if there ever was one. He’s proved it could be done.