Me and Smush (and Kobe) 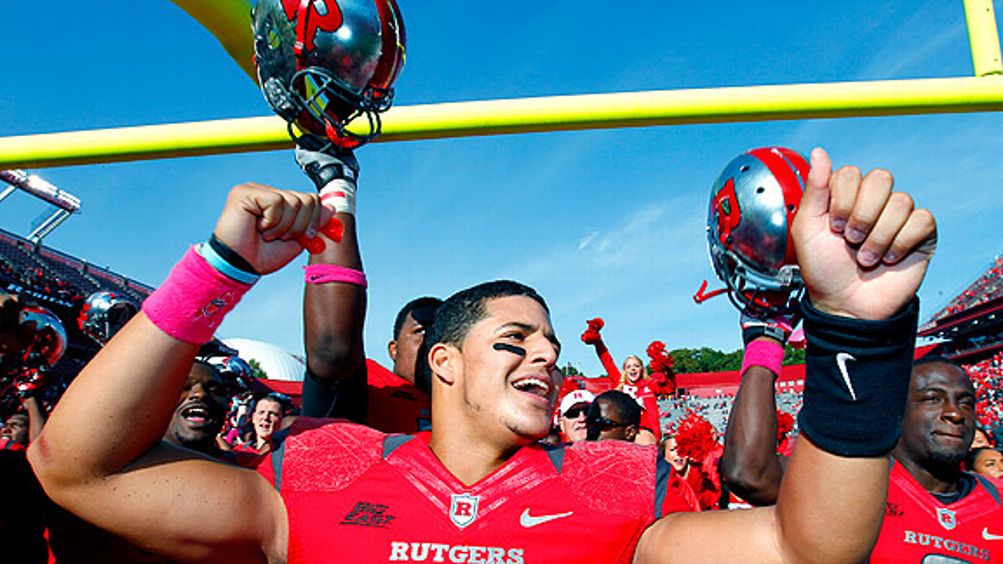 I don’t know who these two guys were, if they pictured themselves as historical reenactors or professional ironists, but they felt to me like fitting ambassadors for a college football program still trafficking on a 50-man melee with Princeton that took place in 1869. They were sitting along the rail in a corner of the end zone that could generously be described as “semi-vacant,” and one of them appeared to be wearing a leather helmet, and together they were holding up a handwritten sign that read, “BEAT VISITOR.”

So let’s just go ahead and admit that there were a number of “semi-vacant” sections at Rutgers’s recently expanded football stadium on Saturday afternoon. They did not exactly jam the rafters at the self-proclaimed “Birthplace of College Football” — it is inscribed right there, on one of the walls in the end zone, in case your memories of the early years of the Grant administration are no longer what they used to be — but what did you expect? There was a Yankees game starting in five hours! Anyway, this is New Jersey, where the gas pumps are manned by professionals and the State U. football team has long been a secondary concern, even when State U. is undefeated. For years, they’ve been trying to drum up interest in the idea of big-time college football right here in the maw of New York City; for years, the conventional wisdom has been that Rutgers is one or two stellar seasons away from elbowing its way into the regular WFAN rotation, but with the exception of a brief flirtation under Greg Schiano in the mid-aughts, it hasn’t really happened.

I mean, did you even know Rutgers was 6-0? Because they are. Really. Seriously. Truly. I live in New York City, and I write about college football, and this story crept under my radar until the past couple of weeks. On Saturday, the Scarlet Knights BEAT the VISITOR, which happened to be Syracuse, one of those few conference foes with a semblance of football tradition that will abandon the sinking Big East after this season for the superior Atlantic Coast Conference. When it was over, a few fans in the home section started chanting “A-C-C,” which may have been an attempt at derision but sounded more like wishful thinking, and then the students started to chant “Six-and-oh!,” as if they could hardly believe it themselves. And I give them credit: They were a spirited student section, even if it felt like they were learning how to do this on the fly.

“I can’t say enough good things about our student section,” said Rutgers’ first-year coach, Kyle Flood. “It’s what hopefully your home-field advantage should yield for you as you go forward during the season.”

There is little doubt that Flood has done a remarkable job in picking up the pieces following the abrupt departure of Schiano for the Tampa Bay Buccaneers; there is little doubt that Rutgers has an excellent defense, including one of the great linebackers in America in Khaseem Greene;1 there is little doubt that this Rutgers squad has an opportunity to be as good as any Rutgers team ever, for which Schiano deserves at least some of the credit. As a college football fan marooned in New York City, I wish them the best — there is nothing I would enjoy more than hearing Mike Francesa argue for an hour about high school recruiting with Vince from Edison. But there is a big-picture question looming over everything here, and it has to do with history, both distant and recent; it has to do with the very viability of a major college football team in a region that doesn’t seem to need one in the first place.

The basic theory behind the continued existence of a big-time Rutgers football program is that it will eventually “build the Rutgers brand” in ways that only football can. This is the rationale college administrators use to convince themselves that an oft-corrupt and debilitating sport is worth the investment, and in certain parts of the country, particularly the South and the Midwest, it is a damned sound strategy. Michigan could subsist as a university without a football team, but the football team creates a cycle that spikes interest from prospective students and breeds an inherent loyalty that prevents alumni from shredding those financial solicitations before they bother to read them. Without football, Michigan would feel like something less tenable, less formidable, less elite.2

I bring up Michigan because I spoke to a man named Mark Killingsworth this weekend. He is a Michigan graduate, and last Saturday he went back to Ann Arbor to attend the homecoming game; he sat five rows behind the Michigan bench, and he found it quite enjoyable. This is interesting for several reasons, but mostly it’s interesting because Killingsworth is an economics professor at Rutgers, where he has become one of the most vocal critics of the school’s athletic program.

Killingsworth is not reflexively anti-football, but like most economists, he speaks the language of money, and there is little doubt that Rutgers is losing a tremendous amount of money in this ongoing attempt at branding — according to the most recent studies, the school is shedding $28 million per year on athletics altogether, which is 40 percent of the cost of the program, which means the deficit has to be made up through subsidies and student fees. According to Killingsworth, every student at the New Brunswick campus pays $900 to help support athletics. Killingsworth’s own School of Arts and Sciences, which had a budget deficit of $25 million over three years, is now facing budget cuts and hiring freezes, and it is easy to draw a direct line to athletics — to the $100 million football-stadium expansion completed in 2009 — and ask how exactly this sort of incongruity benefits the college experience.

“I don’t think athletics has the potential to build the Rutgers brand in any significant way,” said Killingsworth, who says that average SAT scores and the school’s yield — the percentage of accepted students who actually attend Rutgers — has not increased since the mid-2000s. (Rutgers’s standing on the U.S. News & World Report public school rankings has dropped from 16th in 1997 to 25th in 2012.) “Maybe it gets us attention, but it’s not clear the attention it gets translates into anything further. I honestly don’t think we have a lot to show for it.”

What Killingsworth and a large number of his faculty colleagues are asking for is more accountability; if they have to make sacrifices, why shouldn’t athletics have to make the same sacrifices? And it is true that Rutgers’s new president has promised to cut the athletic budget, and it is true that Rutgers’s new athletic director has promised the same, but at some point, you have to ask yourself if there is only so far this university can go before it hits the financial wall. Nearly all of the hard-core college football fans I know in New York City are hard-core college football fans because they graduated from a university where the sport was built into the culture; their allegiances are already set. This is a professional sports town, with the occasional diversion into college basketball, and I’m not sure how you capture the attention of people who feel like they already have enough to pay attention to; this, I’m assuming, is the same reason why Atlanta no longer has a professional hockey team.

But they keep hoping that this year will be different in New Brunswick, and who am I to burst their bubble, to inform them that even if they do go 12-0 this season, the relative weakness of the conference they play in will almost certainly keep them far afield from the national championship game? Who am I to say that the Rutgers football team, which arrived on the scene three decades before the Yankees came to exist, might not someday experience a true and complete renaissance that alters the very perception of the university they purport to represent?

“It was much easier for us to recruit a New Jersey kid this year than last,” a Rutgers football coach once said, “and it was easier last year than the year before. The whole state is more receptive to us now. We are building state pride.”

That was in 1976, and the coach was Frank R. Burns. He was speaking to a Sports Illustrated reporter after an 11-0 season that ended when the team, feeling shunned, rejected a bid to play McNeese State in the Independence Bowl. Following that season, Rutgers stepped up the quality of its opponents, joined college football’s arms race, and the Scarlet Knights’ records slowly dwindled from 9-3 to 7-4 to 5-6. Burns was fired upon finishing 3-8 in 1983, and the cycle began again — three straight coaches with losing records until Schiano’s blip of success — and after 14 decades of trying to build state pride at State U., I’m not sure if anyone knows where it’s supposed to stop.