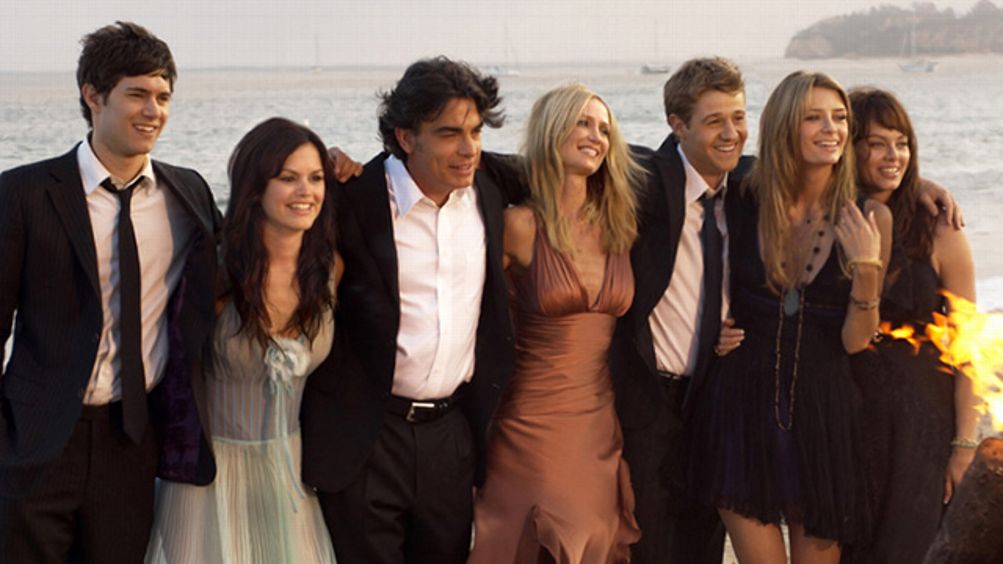 My wife still owns an O.C. board game I gave her nine or so Christmases ago. I don’t think we ever played it — there’s such a thing as going too far, people — but I’m glad it’s somewhere in the house. Even back then, we probably knew we’d need a souvenir to jog our recollections of a pop phenomenon as evanescent as then 26-year-old creator Josh Schwartz’s tongue-in-cheek 2003-07 teen soap.

For a series Everybody Was Talking About during its brief heyday — and did any other show do so much to transform “meta” from critspeak to buzzword? — The O.C. has left a puzzlingly faint imprint on people’s memories. Unless I’m wasting my time on the wrong websites, Schwartz’s marvelous goof on all things TV doesn’t come up often even as a point of comparison to whatever everybody is talking about now, though its air-quote influence can be detected everywhere from It’s Always Sunny in Philadelphia to True Blood. And too bad, considering that serving as a recognizable point of comparison is pretty much all that’s left of the concept our elders knew as immortality.

By way of contrast, broadcast TV’s two most gabbed-about debuts of 2004 — Desperate Housewives and Lost — are fairly secure as landmarks go. Of course, they both lasted longer. Though The O.C. held on for four seasons, the magic was waning by the second and the series was hemorrhaging viewers by the third. And no huge mystery there, because the tension between wiseacre parody and old-fashioned heart was too brittle for the long haul. Most of the innovative TV shows that end up beloved grab our imaginations with their gimmick first: Lost‘s simulacrum of post-9/11 paranoia, say, or Mad Men‘s revisit to the ’60s. Only gradually do they evolve into enclosed worlds whose self-referential quiddities we dote on for their own sake. Once that happens, revering The Sopranos has more in common with digging Happy Days than David Chase would probably like to admit.

The O.C.‘s high jinks, on the other hand, were so elaborately folded in on themselves from the start that it was like watching an origami crane hatch from a real egg. The whole point was that audiences had been here before — “here” meaning, above all, Beverly Hills, 90210, the Planet Teen blueprint most prominently getting a po-mo makeover. But Schwartz was also cheerily drawing on every adolescent-anguish trope since the invention of the American teenager in the 1950s, starting with our culture’s weird rule that class conflict is a topic best addressed via teen romance.

The O.C.‘s high jinks were so elaborately folded in on themselves from the start that it was like watching an origami crane hatch from a real egg.

As soon as Chino-raised roughneck Ryan Atwood (Ben McKenzie) got implausibly taken into the posh Newport Beach home of Jewish attorney Sandy Cohen (Peter Gallagher) and his WASPy wife, Kirsten (Kelly Rowan) — and, above all, their son, Seth (Adam Brody), whose running hipster-geek commentary made him the personification of the show’s cheeky self-awareness — we knew what was going to cure our hero of those prole-misfit blues. Ryan wasted no time before falling in love with a rich girl, in the all-too-willowy form of Mischa Barton as Marissa Cooper. Part of The O.C.‘s new-thang vibe was that Marissa (and/or Barton; devotees never did make up their minds about that one) being a narcissistic, neurotic pain in the ass didn’t interfere with the show’s appeal. She wasn’t the love of Ryan’s life — just his gateway drug to money-changes-everything.

No dummy, Schwartz was also recapitulating generations of soaps about privilege. Gallagher’s Sandy Cohen was an idealistic, Berkeley-educated lefty — the reason he rescued Ryan from a future in jail in the first place — who was at constant odds with his millionaire father-in-law’s entrepreneurial rapacity. As the wonderfully named Caleb Nichol, Alan Dale could make a polo shirt look like a scorpion’s carapace, but that hardly stopped The O.C. from purveying sunnily seductive fantasies of the good life. The enchantingly daffy, echt-American message was that money was the root of all evil — but affluence, on the other hand, was swell.

The series didn’t stint on delivering the torrid soap goods. Marissa went from binge-drinking to lesbianism before — oh, blessed day — getting killed in a car accident; her dad, Jimmy (Tate Donovan), went bankrupt, sending mother Julie (Melinda Clarke) tumbling down the social ladder like a Slinky with cleavage. On top of his romantic entanglements and frequent brawls with Newport Beach’s pampered thugs — I retain a special fondness for Chris Carmack’s Luke, initially the in crowd’s blond enforcer but later the show’s zaniest cutup — Ryan had to cope with the dysfunctional family he thought he’d left behind in Chino, and so on. The treatment of nouveau riche snobberies, slippery status anxieties, and precarious good fortune was often sharp. Yet The O.C. played less like a soap opera than a soap operetta, drolly conscious of its own excesses and reveling in the pure-TV artifice of it all.

For starters, we were treated to not one but two shows-within-the-show: The Valley, a teen soap to which our own soap’s heroines were addicted, and a reality series called Sherman Oaks: The Real Valley. (You may have to know L.A. to appreciate how very funny that second title is.) But The O.C.‘s true charm was in the way it conducted an ongoing, interactive dialogue with its viewers. Schwartz must have been among the first showrunners to pay attention to online message boards and delight in tweaking them back. If people made cracks about McKenzie as a Russell Crowe wannabe, a mocking reference to Crowe was sure to pop up on the air within weeks.

The effect was to make viewers complicit at a quasi-collaborative level, a novelty that left that stupid term “guilty pleasure” looking even more inane than usual. If The O.C. was essentially — and even proudly — trash, Schwartz’s gamesmanship made it trash you couldn’t condescend to. There was no better way to know the scripts’ manipulative tricks than to simply allow the show to reveal them for us.

It’s no surprise that all this didn’t take long to turn into too much of a good thing. If Seth Cohen’s ultra-reflexive banter started out as our guide to the show’s M.O., it sometimes seemed by the later seasons as if everyone was talking that way — and you do need Leopold Bloom to keep Stephen Dedalus grounded, after all. Since The O.C. wasn’t a boutique cable series but an old-fashioned broadcast workhorse — 92 episodes in three and a half years, as opposed to The Sopranos‘ leisurely 86 in eight — the show chewed through every available romantic complication like Hunter Thompson in a pharmacy.

Then again, one way TV futzes with our aesthetic sense is by getting us to see sustainability as a be-all and end-all. Almost the only series I can think of that kept getting better throughout its run was Buffy the Vampire Slayer, and even Buffy had a rocky season or two along the way. If The O.C. wore out its welcome, so what? When it was good, the job Schwartz did on prime-time clichés was a modest equivalent to what Pedro Almodóvar did for 1940s Hollywood weepies.

Still, a decade later, what I remember best is three performances. One, needless to say, is Adam Brody’s Seth Cohen. The TV template for literate, over-intellectualizing comic-book buffs wasn’t nearly as stamped in tin back then, and the guys on The Big Bang Theory can’t touch him. Besides, Brody had enough magnetic chutzpah that I once thought he’d make the ideal young Lou Reed in a Velvet Underground biopic.

The second, of course, is Rachel Bilson as Seth’s third-grade crush and renascent love interest, Summer. (Schwartz had a real gift for character names.) Conceived as a value-challenged airhead, she morphed instead into the kind of cranky, smart soul mate every aspiring artist pines for. Bilson wasn’t even supposed to be a regular on the show, but Summer’s evolution into a headstrong and complicated grown-up ended up as its best character arc.

Nonetheless, Peter Gallagher is the soul of The O.C. This veteran actor was plainly having the time of his life. Has any goy ever been so happy playing a Jew? Sandy Cohen’s humorous sense of himself as a brainy interloper among Newport Beach’s rich dipsticks — and yet also perfectly at home, because that role suited him to a T — was lovely. And he handled bagels as reverently as if they were communion wafers, even as Seth invented “Chrismukkah” — a pastiche holiday for a pastiche show.

The secret poignancy of it all was that the series began airing just two years after 9/11 and just months after the invasion of Iraq. Any number of reborn blowhards had claimed that the age of irony was over, 9/11 had changed the country forever, and it was time to put away childish things. At one level, The O.C. was a sensational riposte to all that sanctimony. But underneath that, it was all about fragility — wealth’s fickleness, identity’s situational side — including, ultimately, the show’s own. If this added up to escapist TV, you sure couldn’t prove it by me.

Tom Carson is GQ’s movie reviewer and the author of Gilligan’s Wake and Daisy Buchanan’s Daughter.