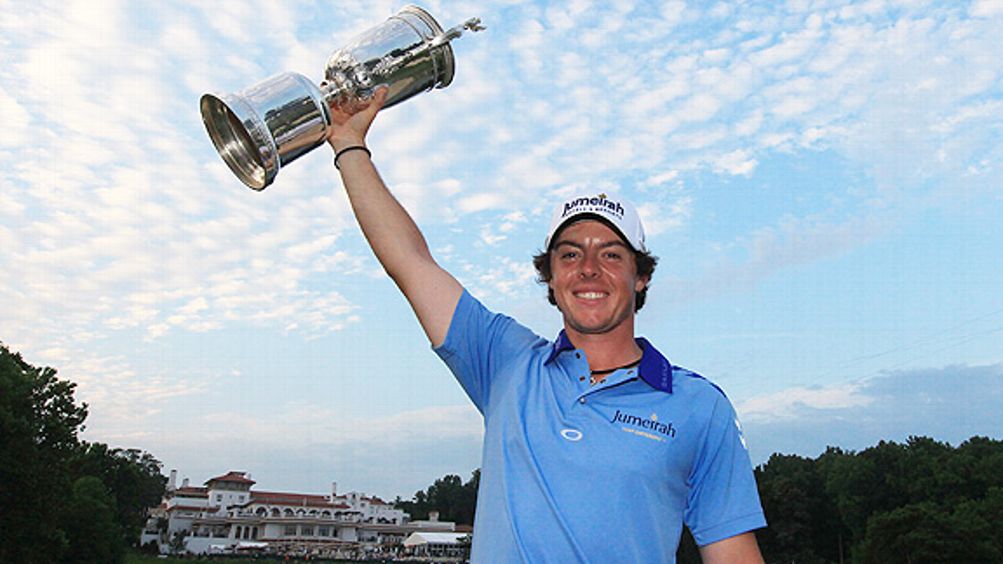 By winning the U.S. Open with such ease, Rory McIlroy arrived on the scene as the world’s next great golfer, the sport’s new household name, and the most precocious young talent since … Tiger Woods. Fellow pro Graeme McDowell, who won last year’s U.S. Open, called McIlroy “the best I’ve ever seen, simple as that.” This isn’t the sort of stuff you hear bandied about after a standard-issue win, even when someone as young as McIlroy wins a major. It got us wondering about just how good McIlroy’s performance truly was; namely, did we just witness the most impressive major championship victory of the modern era?

The simple method of figuring out the most dominant majors performance would be to list winners by their margin of victory over the second-placed golfer. That system is not accurate because it just compares two golfers against one another, as opposed to one golfer’s performance versus the field. Take two victories by Golfer A and Golfer B, each of whom shoot 11-under-par, while the runners-up each shoot 6-under-par. They look equal, but the rest of the field’s performance matters. Let’s say the third-place finisher in Golfer A’s tournament shoots 5-under-par, but the third-placed duffer in Golfer B’s tourney shoots 1-over-par. Player B has clearly outperformed the rest of the field to a greater level than Player A, but raw margin of victory fails to capture that detail.

That’s why we need to use a more complex methodology that measures a performance’s standard deviations above the mean, referred to as Z-Score.1 Z-Score measures a particular performance against the entire field of values, accounting for both the average result and the full range of performances from top to bottom. It does a great job in capturing how much better or worse an individual score was versus the entire population, producing a value that translates across different tournaments, locales, and generations. For the purposes of this study, we analyzed the scores produced by players in every major since 1960,2 including only those players who completed four rounds. Performances in any sort of playoff were ignored.

As it turns out, while McIlroy’s performance wasn’t the most dominant Major victory of the past 50 years, it deserves to be in the discussion. McIlroy’s Z-Score ended up at minus-3.07, meaning that he was 3.07 standard deviations better than the average performance at the tournament.3 It’s the 17th-best performance5 by a golfer in a major since 1960, which places him in rather elite company.

THE TOP 20 MAJORS PERFORMANCES SINCE 1960

The best performance measured over that 50-year stretch, as you might have expected, is the one that McIlroy mentioned in his postround comments: Tiger Woods’ legendary assault on Pebble Beach in the 2000 U.S. Open, when he won by a record 15 strokes in a tournament in which nobody else finished with a score better than three strokes over par. Z-score puts that incredible performance into sharper focus — the second-best performance over the timeframe, Davis Love III’s five-stroke victory in the 1997 PGA Championship, is closer to Bobby Nichols’ 1964 performance at the PGA — 20th on the list — than it is to Woods’ gem.

Using Z-score, we can take Woods’s performance in 2000 and translate it onto the tournament McIlroy just played in, giving us an idea of how dominant that Woods would have been if he showed up in Bethesda last week. To match Woods’ -4.12 Z-score in the 2011 U.S. Open, McIlroy would have needed to complete the 72 holes in 261.6 shots, a figure of better than 22-under-par. McIlroy was 6.4 shots off that pace; even replacing his double-bogey on the 18th in Round 2 with an eagle wouldn’t get him there.

As impressive as it was, McIlroy’s performance wasn’t even the best of this short decade. In last year’s British Open, South African Louis Oosthuizen won the Open Championship by seven strokes, with McIlroy finishing tied for third. Two years earlier, Padraig Harrington pulled off one of the sneaky-great performances of all time, finishing 3-over-par in a famously windy Open Championship at Royal Birkdale. Harrington won by only four strokes, but he was just one of four players who could keep their score over par in single digits. After you adjust for the context of the course and measure Harrington’s score versus every other player in that tournament, he produced an overall performance roughly similar McIlroy’s at Congressional. There was even one losing effort that surpassed McIlroy’s week, the legendary 11-under-par performance by Jack Nicklaus in the 1977 Open Championship. Nicklaus fell one shot short of Tom Watson, but he was 10 shots better than anybody else in the field.

Of course, while McIlroy might have taken a huge leap forward in the public consciousness by winning the U.S. Open, the adoration surrounding him is based upon his competitiveness at such a young age. One fluke week of brilliance would be one thing, but McIlroy nearly won the Masters and has two top-three finishes in major tournaments under his belt already. With nine majors already in the books for the 22-year-old, how does McIlroy’s start rate against players from the past?

In his first nine Majors, McIlroy has put up an average Z-score 0.97 standard deviations below the mean. Since 1970, only two players have put up a better average Z-score in their first nine majors: Ernie Els (-1.25) and Seve Ballesteros (-1.04). Els won his first Major at 28, while Ballesteros won the Open Championship at age 22 years and three months. While nobody may ever compare to Ballesteros’ flair or creativity, McIlroy’s performances in the major championships so far suggest that he’s going to end up producing a career that will stand on its own merits.