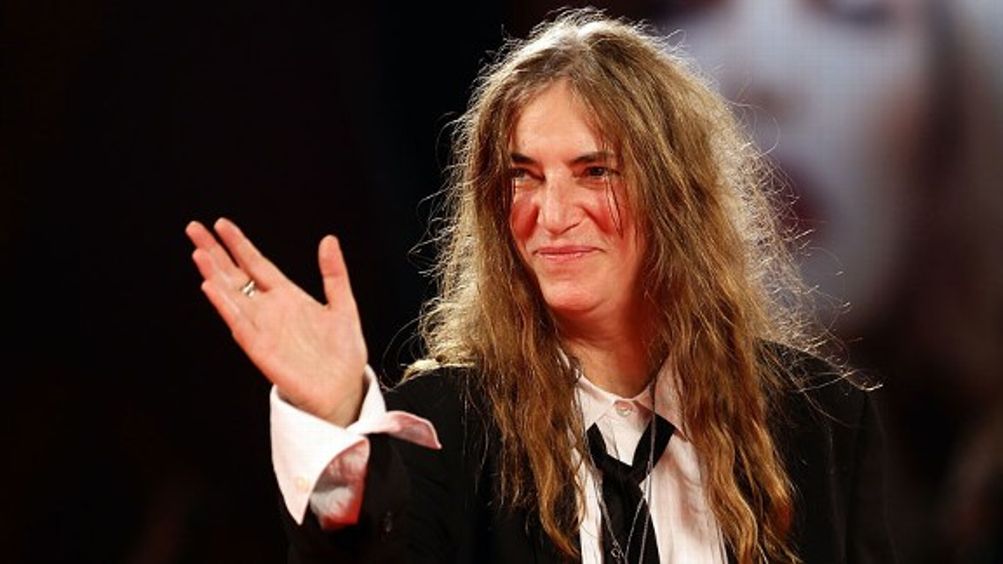 So lately I’ve been thinking about Patti Smith. I don’t know why, unless it’s because she’s everywhere these days. She’s recording a new album; she’s got a song on the Rum Diary soundtrack; she’s exhibiting her photographs in Hartford; she’s written a piece about shoplifting for the New Yorker; she’s talking to A.O. Scott about talking to Jimi Hendrix for the cover of T Magazine. Last year she published a book called Just Kids, a memoir of her friendship with the photographer Robert Mapplethorpe, and came away with the National Book Award. For Patti Smith lovers, a group which I assume includes all people of goodwill everywhere on earth, this has been one of the most fruitful periods in recent memory.

But that isn’t what’s been on my mind. What I can’t stop thinking about is Horses, her first album, which was released in 1975. Of course, this is the era of gratuitously looking backward. Obsessing over a rock record that came out before I was born probably just makes me a citizen of the Zeitgeist that the critic Simon Reynolds described in his recent book Retromania, which forsees culture’s gradual dissolution in a sea of empty commercial nostalgia.1 At the same time, though, looking backward to Horses is in one sense the right way to experience it, since the album is itself a chronicle of a deep and fierce preoccupation with the history of rock ‘n’ roll.

Patti Smith saved rock by showing that the past could be as unfathomable and fucked up and seductive as the present. She made nostalgia dangerous. Before Horses, rock’s sense of its own past was one of cozy innocence, the gooey retro-world of Grease (which opened on Broadway three years before Horses came out) and poodle skirts and jukeboxes warbling in malt shoppes. Horses jolted rock forward and opened the way for punk by positing a darker and infinitely more interesting version of the retro-world, one in which the blue jeans and old, gold Chevies were the outer masks of a timeless — and thrilling and scary — eroticism and violence.2

Horses set itself against a strong current of mid-1970s culture. From the outset, rock ‘n’ roll had been preservationist as well as anarchic — let’s twist again, like we did last summer — but by the weary year of 1975, the tone of that preservationism was changing. Twenty-one years after Elvis signed with Sun, it was starting to be possible to talk about something called “the rock tradition,” which meant practically that the kids who’d grown up with rock were now middle-aged toilers in the workforce, and their kids had never lived in a world where rock wasn’t the background noise of youth culture. The genre had accumulated enough history, in other words, that its origins became an irresistible target for revisitation. And given the Baby Boom generation’s permanent love affair with the idea of its own youth, it should come as no surprise that a dedicated cottage industry sprang up to fill the world with rose-toned paeans to the Suzies and Johnnies of yore. Grease was followed in 1973 by American Graffiti and in 1974 by Happy Days. “Crocodile Rock” gave way to John Lennon’s blowsy record of oldies covers, Rock ‘n’ Roll. Even “Born to Run,” with its teenage hot-rodding and lonely amusement park and girls combing their hair in rearview mirrors, had one foot planted on the trend.

That was the context into which Horses blew like a squall. The usual thing to say about the album used to be that it inspired the rising tide of punks by offering a lo-fi alternative to the exhausted decadence of mainstream rock, blah blah blah.3 But listen to Horses now and it’s impossible not to notice that Smith is absolutely hell-bent on re-curating rock’s lost past. In a smart discussion on Smith in Retromania, Reynolds notes that “Horses made her an icon, but she started out as an iconographer,” assiduously channeling old heroes from Jim Morrison to Jeanne Moreau. Horses is an album of weird, altered, shabby-transcendent covers of ’60s teen fuzz (“Gloria,” “Land of a Thousand Dances”), surreal fantasias about Morrison and Hendrix (“Break It Up,” “Elegie”), reimagined moments lifted from half-remembered songs (“Kimberly,” which takes a girl-group lilt, a wisp out of an imaginary Ronettes single, and uses it to frame the apocalypse). Most of all, it’s an album whose feverish imagery invests the old renegade rock clichés — leather jackets and switchblades and sha-da-doo-wops — with the mystical seriousness of French Symbolist poetry. Rimbaud wrote in 1871 that he wanted to “reach the unknown through the derangement of all the senses.” “Go Rimbaud,” Patti Smith affirms on Horses, “and go Johnny go.”

This project, the effort to energize rock by roughing up the archetypes, is the sort of thing people have always wanted to credit Springsteen with, even back in 1975.4 But Springsteen, Smith’s future collaborator and fellow New Jerseyite, was always safe, a chuckling opportunist who dished out whatever variety of Americana the moment seemed to require. Patti Smith meant this. In 1975, she was 28 years old, a skinny non-kid who’d been kicking around the precincts of the New York City avant-garde for the better part of a decade. She was old enough to remember the early days of rock and young enough to be entirely aglow with her vision of the artist’s sacred calling — an androgynous crusader, “just some misplaced Joan of Arc,” as she sang in “Kimberly.” She’d published three books of poems; while Springsteen was diligently studying to be a rock star, she was doing the spoken-word soundtrack for a film called Robert Having His Nipple Pierced.5

Somehow all of this, the sickly childhood and the downtown mysticism and the Verlaine obsessions (Paul and Tom) and the Beat influences and the head full of dead rock idols, coalesced into the wild, spindly noise of the Patti Smith Group, which got its start when she decided to augment her poetry readings with Lenny Kaye’s guitar. Horses, which was produced by John Cale, rattles forward like a bulldozer made out of sticks, menacing, impossibly tight, and yet likely to fall apart at any moment, causing untold damage to anyone nearby. Once you’ve heard “Land,” the 9½-minute suite that anchors the album, it’s hard to go back to the retro-world view of rock nostalgia without feeling cosmically terrified.

“Land” opens with Smith narrating in a flat, drowsy hush. It starts out as another rock cliché, a throwaway moment out of a James Dean movie. There’s a boy in a hallway by a locker. Another boy is coming down the hallway. A scratchy guitar starts up, faint and not quite in sync with the voice, in the background. Smith’s voice, backed by ghostly snippets of half-heard, multitracked phrases, gets more urgent as the second boy comes nearer. What takes place is either a violent rape or an eerily erotic stabbing: “The boy took Johnny, he pushed him against the locker / He drove it in, he drove it home, he drove it deep in Johnny.” The music locks into place, and the drums kick in as the dying or injured Johnny falls into a vision in which he’s surrounded by horses, “white, shining, silver studs with their nose in flames,” foaming all around him. Then Smith’s voices rises to a yowl as she belts out the first line of “Land of 1000 Dances,” one of the most immortally silly ’60s dance hits, now chillingly transfigured: “Do you know how to Pony / Like Boney Maronie?” Johnny sees an angel, then strips off his leather jacket to reveal the jackknives and switchblades taped to his chest, then spirals away into another vision. And so on for five more minutes, until the song whispers out on a quiet allusion to the death of Jimi Hendrix.

And here’s where this gets meaningful for punk, because the implication of “Land,” and by extension the rest of Horses, is that this this stuff was in the music all along. Early rock was always in league with ecstasy and violence, even when the lyrics suggested otherwise. A cheesy party track like “Land of 1000 Dances” (or “I Like It Like That,” another goofball classic alluded to in “Land”) concealed pathways to self-escape worthy of Rimbaud. If you knew enough to look, nostalgia for the cozy yearbook memories of Happy Days was actually a covert longing for the genuinely freaky shit that surges behind the rock scenery of “Land.” Every leather jacket is a threat, and also a beacon.

“Our mission,” Patti Smith has said of Horses, “was to make space for the new guard.” Her band played CBGB, toured England, met the infant Clash, and so on. But it’s always been a little hard to say exactly how Horses inspired punk, since the record sounds nothing like the music that followed it. Well, if you were a kid with a guitar in 1975, totally burned out on everything to do with the post-Flower Power, AM-radio universe, wouldn’t you want to hear that there was a devil in the old tunes after all? This was a moment when cynicism about the course of popular music was at an all-time high among the intended consumers and future practitioners of popular music, and the two dangers that resulted from that cynicism — stagnation or the fragmentation of the rock tradition — could be forestalled only by something that made smashing a guitar seem worth it. If “no future” is your mantra, where are you going to look?

So to my mind, the contribution Horses made to punk — the space that it opened for the new guard — was that it burned away the complacency of ’70s nostalgia and hooked what the kids were up to back into the original ethos of rock. The Clash were out to tear down the genre, but tearing down rock was an imperative rock had given them in the first place. (Thus the half-ironic, half-desperate cover of London Calling, which shows Paul Simonon smashing his bass while framed by typography ripped off from Elvis Presley.) The Ramones covered both girl-group and British Invasion songs seamlessly. Blowing up the ’70s turned out to be a way to live up to what had mattered as far back as the ’50s, or maybe the 1870s, or maybe always. It was Patti Smith, more than anyone, who traced what that meaning would look like, beyond the obvious leftist or anarchist politics. And maybe that’s why I can’t stop listening to Horses. She gave rock a meaning and a purpose at a moment when neither meanings nor purposes seemed possible.

Previously from Brian Phillips:
Ronaldo vs. Messi
Noooo-klahoma!: The misery of rooting for the Oklahoma State Cowboys
The Problem with Novak Djokovic
The Brash Style in American Tennis
Corruption, Murder, and the Beautiful Game: On FIFA’s scandalous history
The Long Autumn of Roger Federer