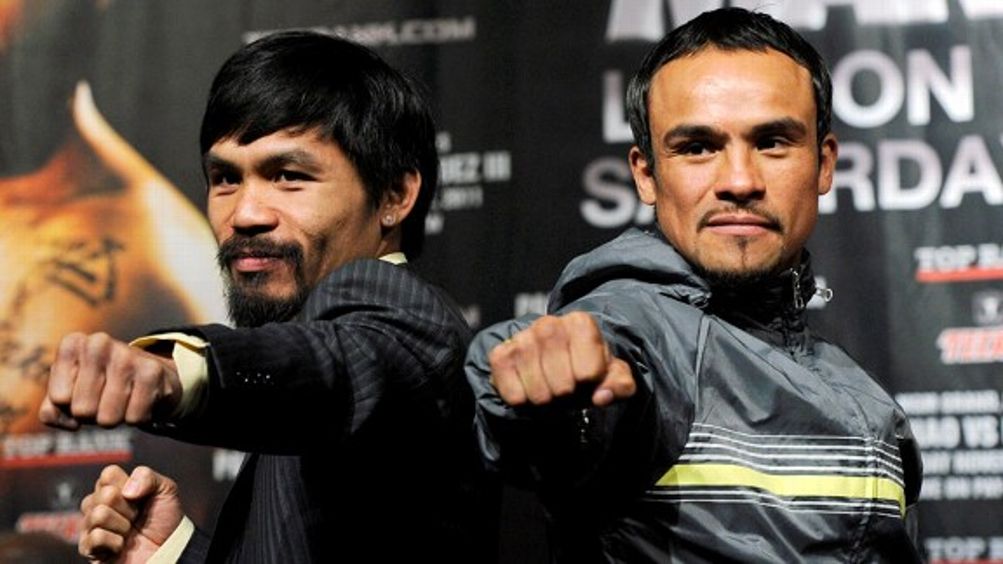 Manny Pacquiao often becomes chummy with his opponents after beating them senseless. Former lightweight champion David Diaz, whom Pacquiao shredded in 2008, became an honored guest at Pacquiao’s 30th birthday bash later that year. After Pacquiao defeated Erik Morales in the final fight of their trilogy, Morales showed up in a San Miguel Beer commercial to hand Pacquiao a cold one.

Juan Manuel Marquez, who will enter his third bout with Pacquiao on Saturday in Las Vegas as an almost 10-1 underdog, also had an opportunity to visit the Philippines and be Manny’s pal. In April 2008, about a month after Pacquiao won a split decision over Marquez in their second fight, Marquez’s name was floated as a possible guest star, alongside Pacquiao, in an annual reenactment of the 1521 battle in which Lapu-Lapu, a precolonial Philippine chieftain, is said to have slain Portuguese conquistador Ferdinand Magellan. The plan was for Pacquiao to play Lapu-Lapu and for Marquez to be Magellan. It’s not entirely clear that the offer was officially extended, but it’s a fair bet that Marquez would have declined.

Set aside how insane it was to ask a Mexican boxer, whose country — like the Philippines — endured centuries of Spanish rule, to play the role of a conquistador. Even if Pacquiao had decided to erect a Juan Manuel Marquez statue in General Santos City and invited Marquez to witness its unveiling, I doubt Marquez would have accepted the invitation. Instead, he might have offered to bulldoze the statue. That’s because when it comes to the way Marquez feels about Pacquiao, it’s all chippy and no chummy.

Marquez’s bitterness is understandable. In 2004, when he and Pacquiao first fought, Marquez famously suffered three knockdowns in Round 1 and battled back to earn a draw. When they met again four years later, Pacquiao again knocked Marquez to the mat — this time only once, in the third round — and Marquez again rose to his feet and outboxed Pacquiao for long stretches of the fight. The knockdown, however, gave Pacquiao the decision. Marquez believes he won both fights, and they were close enough that he’s not considered delusional for saying so.

After beating Marquez, Pacquiao rose to lightweight and defeated David Diaz. Then he moved up to welterweight, where he ended Oscar De La Hoya’s boxing career. Then Ricky Hatton, Miguel Cotto, Joshua Clottey, Antonio Margarito, and Shane Mosley. Pacquiao joined Floyd Mayweather at the top of boxing’s pyramid. Together, they are the sport’s biggest stars, best fighters, and top earners (and no, they might not ever fight each other). Marquez sees this. He sees Pacquiao on the Forbes list of highest-earning athletes. He sees Pacquiao’s success, his fame, and the likelihood that Manny will forever be known as one of the greatest fighters in history, and Marquez feels it should be his. That’s not really true. Even if Marquez had won in 2008, he almost certainly wouldn’t have been able to duplicate Pacquiao’s stunning climb since then from a 130-pound super featherweight to a 147-pound welterweight. But Marquez can’t help himself. He knows he won those fights (even if no one else is quite that sure), and he thinks, “There, but for Pacquiao’s thunder-and-lightning left hand (or the grace of God; they’re kind of the same), go I.”

But Marquez’s enmity seems deeper than career envy. It’s not just sour grapes. It goes to the root of his fighting style, what makes him great as a boxer, his philosophy in the ring. Marquez is quick, but he’s not fast enough to overwhelm opponents. His punches are sharp, but he can’t knock other top fighters out with a single shot. His one truly sublime skill is counterpunching. When he stands in front of his opponent, dodging and deflecting blows while simultaneously landing his own punches from numerous angles, Marquez seems several steps ahead of his adversary. It’s like that scene from the Sherlock Holmes movie, when Robert Downey Jr. puts a whooping on a brawny, bare-knuckles brawler while providing slow motion, blow-by-blow analysis. Watching Marquez fight, I imagine a similar narration, only in Spanish.

Marquez’s reflexes, precision, anticipation, and experience make him look brilliant in the ring. Not the kind of “brilliant” that is just another way of saying “awesome” or “amazing,” but actually like his brain processes feints and hooks and uppercuts at twice the rate of his opponent’s mind. Pacquiao is the first kind of brilliant. He spent the early part of his career — and won a handful of world titles by — just inundating fighters with his speed and power. It’s as if Marquez the tactician finds Pacquiao’s talent somehow distasteful — boxing should not be that simple. Marquez fought the raw, not-very-technical version of Pacquiao in 2004 and a somewhat more polished version in 2008. He may have outboxed Pacquiao in those fights, but Marquez could not beat him.

So after a 3½-year campaign for a rubber match, Marquez will get a final chance to prove that his big boxing brain can defeat Pacquiao’s God-given and Wild Card-gym-honed talent. He brings the obsessed determination of Captain Ahab into this fight, and if Marquez pulls off an upset he’ll have his long-awaited proof of being the better man. In the process, he’d also make Floyd Mayweather’s life easier (although less wealthy by several millions of dollars) by allowing Mayweather to avoid Pacquiao on the grounds that Manny lost to a fighter Mayweather beat convincingly in 2009.

For Pacquiao, this could be a stay-busy fight, another world-class opponent to chop into itty-bitty pieces while he waits for Mayweather. Only Pacquiao hasn’t treated this as just another title defense. Freddie Roach has been telling anyone who will listen that Pacquiao has never seemed more serious and more determined about a fight than this one. Maybe it’s because, as Roach suggests, Marquez has been too loud in expressing his belief that he won the first two bouts. Or, perhaps it’s because Pacquiao realizes that Marquez and his pinpoint counterpunching have given him two of the toughest fights of his career, and he considers Marquez a legitimate threat.

But if Marquez is so dangerous, then why is he an even bigger underdog coming into Saturday’s fight than Mosley and Margarito were before their respective fights with Pacquiao? Start with the fact that Top Rank, the company that promotes Pacquiao, has finally decided to allow Marquez to challenge him. Fighters at the top of the sport choose their opponents, and they typically select guys whom they’re fairly certain they will beat (of course, certainty is a slippery concept when trapped inside a ring with another man who stands to make a fortune from beating your face in). Since 2008, Top Rank has done a masterful job at picking Pacquiao’s opponents. The strategy, in retrospect, seems pretty simple — go after bigger guys who won’t be able to handle Pacquiao’s speed. Time after time, however, the boxing public bought into the fights and the drama of a smaller man rising in weight to test his quickness and power against men several inches taller and visibly bulkier than him.1

The calculating underbelly of Top Rank’s strategy became apparent in Pacquiao’s most recent fight against Shane Mosley. Few people believed Mosley had a chance against Pacquiao, and the resulting 12 rounds of duck-duck-goose were beyond disappointing. Pacquiao is a once-in-a-generation talent, and watching him chase a 39-year-old man in circles was an infuriating waste of Pacquiao’s athletic prime. Suddenly, it felt like Pacquiao’s opponents weren’t chosen because these bigger men would pose greater challenges, but because these has-beens had marketable names. To right the ship, Pacquiao’s next opponent had to be a serious threat, and who better than his old foil, Marquez?

Marquez has been agitating for another shot at Pacquiao since 2008, but after the second fight Pacquiao and his handlers said they had nothing left to prove and that they planned on moving up in weight. In boxing, that’s code for “We don’t want to be anywhere near that guy.” Now that they want Marquez, it’s hard not to wonder what’s wrong with him.

A few things might be wrong with Marquez. For starters, he’s 38 years old. Even though Marquez’s speed and reflexes have seemed sharp in recent fights, age has a way of catching up with athletes in a hurry. If he gets in the ring and finds out he doesn’t have it anymore, Pacquiao will knock him out fast. Second, and perhaps more significantly, Marquez had to move up two weight classes, from lightweight to welterweight, for this fight (although he and Pacquiao agreed to a 144-pound catchweight, three pounds below the welterweight standard of 147). Marquez fought at 144 pounds once before, when he lost to Mayweather two years ago, and it was one of the worst performances of his career. Marquez looked sluggish and helpless as Mayweather won every round, and many observers blamed Marquez’s extra weight.2 We have all seen that Pacquiao has not only preserved, but also improved his speed and power while moving up in weight. If Marquez loses just a touch of speed in going from 135 to 144 pounds, he could find himself unable to keep up with Pacquiao’s combinations.

But the biggest reason why Pacquiao is such a huge favorite in Saturday’s fight is Pacquiao himself. The first two times he and Marquez fought, Pacquiao was the “awesome” kind of brilliant — a physical specimen, an otherworldly combination of hand speed and power. His main — some would say only — weapon in the ring was a right-left combination where the right measured distance and the left did damage. Now, perhaps because Marquez outboxed him those two times, Pacquiao has become a complete fighter. He is now both kinds of brilliant. Marquez has not faced the five- and six-punch combinations Pacquiao used to bloody Miguel Cotto and break Antonio Margarito’s face. Those attacks were more varied, more unpredictable, more lethal than anything Pacquiao threw at Marquez in 2004 and 2008. Marquez gave Pacquiao a boxing lesson back then, and Saturday night Pacquiao will try to show Marquez just how much he has learned.

Correction: When this story was originally published, a footnote erroneously stated that Manny Pacquiao and Oscar De La Hoya fought at a catchweight. In fact, they fought at the regular welterweight limit of 147 pounds.

Previously from Rafe Bartholomew:
Fight of the Year?
Spoelstra in the Philippines
Kobe Takes Manila; NBA Not Invited
M/F/K with A Tribe Called Quest
The YouTube Highlights NBA Draft