The Fouettés en Tournant of the WTA 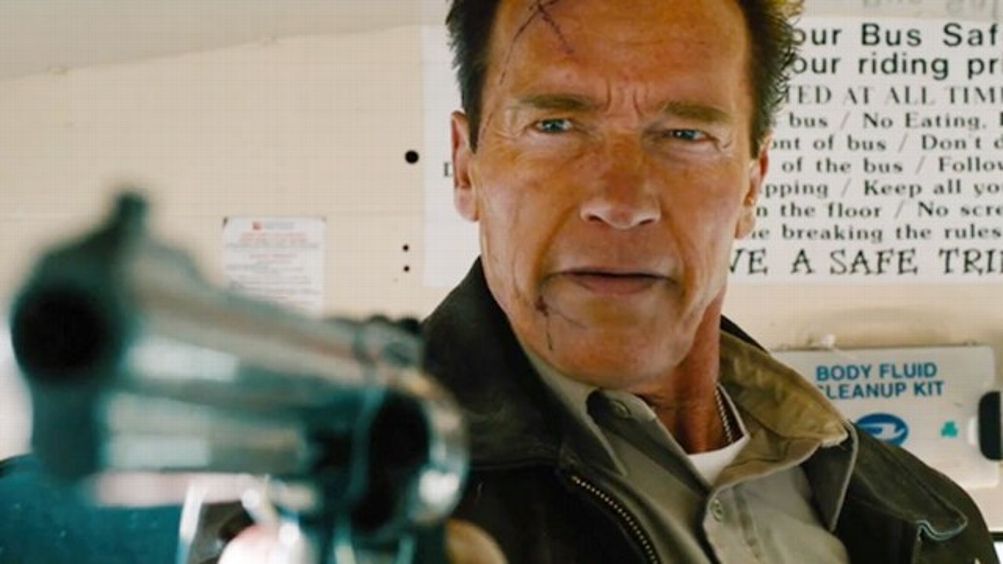 This is probably not the week to release a movie in which Johnny Knoxville feeds a belt of bullets into an antique machine gun as Arnold Schwarzenegger mows down an assortment of armed and anonymous men. But anything this artillery-crazed and starring a former elected official whose nom de guerre was “The Governator” doesn’t care about the national climate on guns. Bullets are simply part of the weather in The Last Stand, Kevlar being the preferred umbrella. The weaponry is so ridiculously bountiful that the movie must be a defense against something.

But it’s just another lousy action movie. And for more than an hour, it’s less than that. Schwarzenegger plays the sheriff of a sleepy, saloony Arizona town that abuts Mexico. A drug lord has sprung himself from a Las Vegas prison and is headed the sheriff’s way to speed across a bridge he’s had custom-made to cross the border. It’s not worth going into why the drug lord has handcuffed a sexy agent inside his speeding Corvette or what Forest Whitaker is doing leading the team of feds pursuing this fugitive. And why go into what nincompoops the sheriff’s deputies are? Or how nothing that precedes the big high-noon shootout matters — not the goon squad captained by Peter Stormare, the Nordic nut from Fargo; not the many lifeless scenes with Whitaker and the FBI; not one minute of time spent with Schwarzenegger, whose face is too tight and tan and whose hair too fussed over and chestnut to be as Clint Eastwood–crusty as the movie needs.

No, the entire movie exists for the climactic high-noon shootout, in which Stomare’s team and the sheriff’s five-person crew, including Knoxville, Rodrigo Santoro, and Luis Guzman, blast away at each other. Its violence has a gathering comedic force. It’s vaguely funny the way a flare gun has been rigged to simulate a grenade launcher, so that when the flare hits a body it produces fireworks and then detonates, sending an arm, say, hurtling through the air. It’s the only kind of mayhem Jee-woon Kim knows. Kim is a relentless South Korean whose specialty is queasy genre junk — whether it’s horror (A Tale of Two Sisters); spaghetti western (The Good, the Bad, the Weird), or vengeful cop procedural (I Saw the Devil). If he can take things too far, he’ll take them even further. An ungainly mix of comedy, violence, sadism, and schlock obviously arouses him. But the fun and tension of his moviemaking gradually devolves into tedium. Even with all the competing tones, his movies have one note that Kim is cocky enough to think he can sustain for more than two hours.

The Last Stand is his first Hollywood movie and his first in English, and, until the movie’s standoff, he doesn’t get to apply any of his crazy sensibility to the dime-store action-thriller script that’s credited to Andrew Knauer. Kim operates in the same family as both John Woo and Quentin Tarantino, but he lacks Woo’s soulfulness and Tarantino’s ingenuity. Still, when he gets going toward the end of The Last Stand, the movie wakes up and manages to distinguish itself, at least, from whatever straight-to-videoness we typically associate with an actor like Jeff Fahey. The showdown is shot in daylight, and the camera zooms and caroms and, attached to a school bus, spins in the dirt. When Kim tires of guns, he stages a second climax — a two-car chase in a cornfield — then a third, featuring UFC-worthy body-to-body combat. He goes through styles of violence the way you might navigate a department store. Eighth floor. Cutlery!

Of course the grammar used to create the mayhem is all military. Most of the men in this sequence are ex-soldiers and Marines, and the way the artillery is fired or the way these guys tip-toe-sprint across an ominously empty Main Street or walk up a flight of stairs while shooting feels very much like war — both the news media’s approximations of combat and what passes for it in movies and video games. Kim isn’t taking seriously any of those serious evocations, though. That man-to-man showdown manages to give Schwarzenegger a good line about immigrants and immigrants’ pride. But it’s hollow since the violence in the movie has really been scrubbed clean of real politics. It’s not small-town Americans trading fire with Mexican drug cartels. It’s small-town Americans blowing away enemies in a single-shooter game.

You’re never distracted from the stultifying emptiness of it all. The Last Stand, yes. But what on earth is it standing for? 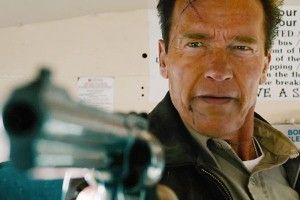 Broken City is even blander and stands for less. It’s a local-government corruption thriller that doesn’t care about logic or consistency or the people watching it. It feels like an accident, a movie you find in progress on Cinemax at 2:35 a.m. and can’t believe you missed until the moment arrives when you can’t believe you’re still watching. But a film starring Mark Wahlberg, Russell Crowe, and Catherine Zeta-Jones will do that to the best of us.

When was the movie even made? 1998? 2003? Last year? It’s not just that the music cues are baffling. Yes, somebody’s got an iPhone and the DJ at a movie-premiere soirée puts on DMX’s “Party Up,” which is 13 years old. (But that could merely signify excellent taste, since it’s the sort of song a DJ should always play.) The reason to feel confused about this movie is that it has Mark Wahlberg as a rogue cop turned private eye. It has Crowe as the mayor of a New York City that may as well be Detroit (that, unfortunately, would be Broke-Ass City; filmed in New Orleans, it’s actually the Big Easy pretending to be the Big Apple). It has Zeta-Jones in the sort of role that gives you the fake–Faye Dunaway blues.

Wahlberg is Billy Taggart, an NYPD detective who shoots a suspected rapist and murderer in a housing project. A judge exonerates him, but the mayor and the chief of police (Jeffrey Wright) ask him to resign lest the question of whether he murdered that rapist persist. Seven years immediately pass, and Taggart is working as an underpaid private eye whose services the mayor suddenly needs. The mayor’s wife is sleeping with another man. And I was certain this was a terrible movie and that no cared how bad it was when Crowe went on a tirade about wanting Taggart to reveal how well-endowed the other man is and whether she fakes her orgasms with him the way she does with the mayor, who’s campaigning for reelection. It’s an embarrassing speech that manages to make the character less credible than he already is. And with still 90 minutes left!

It’s as intriguing as spending 100 minutes watching a lamp. But a lamp, at least, illuminates.

Where all of this leads is so much less interesting than it should be. I’ve rarely been this confused by a thriller. Is there something afoot with the mayor’s rich young opponent (Barry Pepper)? Is that something homosexual or not? How absurd is the scheme that the mayor wants to pull off with that housing project? And why isn’t the movie, which Brian Tucker wrote and Allen Hughes directed, more about that? And why do we have to go to that movie premiere of Taggart’s “indie-film” actress girlfriend (Natalie Martinez)? And what independent movie has looked this much like both a 98 Degrees music video and an episode of Red Shoe Diaries?

Where it all winds up is as intriguing as spending 100 minutes watching a lamp. But a lamp, at least, illuminates. This is the sort of movie Sidney Lumet made about five times. But even when they didn’t work, those movies — Serpico, Prince of the City, Power, Q & A, Night Falls on Manhattan — had an electric charge. They had something to say about ego and power and corruption. They were New York movies that could provide an x-ray of their broken city and surprise and move you with their histrionics. Hughes — working for the first time without his twin brother, Albert — has exactly one great idea, and it’s to shoot Wahlberg drunk on the streets throwing a bottle at an SUV and beating up a guy on the sidewalk. But he gives it to us as a montage that lasts about a minute. This sequence should be the dramatic centerpiece — since Taggart was an alcoholic who sobered up for his girlfriend and has now, thanks to the embarrassment of her movie, fallen off the wagon. We see him down three or four or five shots, rough up her costar, and go on that mini-rampage. But then the phone rings. It’s the screenplay calling with shocking news. And Taggart is magically sober enough to resume advancing this nonsense plot.

If Broken City couldn’t be Sidney Lumet, it could at least have been good trash. But it’s not even filthy enough for that. For one thing, Hughes and Tucker aren’t thinking clearly enough to get the movie down into the gutter. For another, I don’t know that Hughes could’ve gotten his stars to go there with him. None of them wants to commit to breaking a sweat lest we think they actually cared. Only Pepper and Wright lower themselves to the potential luridness. Pepper is a Canadian who’s never sounded more from British Columbia than he does here, weeping and pontificating. He has to do too much with this vaguely written part, which is nice since no one around him is really doing anything with theirs. Wright, meanwhile, is playing the kind of corkscrewed cop that calls for cockeyed deviance. I also like the sass and backhanded affection Alona Tal uses to play Taggart’s assistant.

Otherwise, this is just more exercise for Zeta-Jones, who hasn’t carried a movie in almost a decade. She and Crowe are ideally matched. He’s the bigger actor. She’s the better star. But neither does the other any favors. Between this and his two-note singing in Les Misérables, Crowe’s going through a real miscasting phase. Throwing himself into the Seine as he does in Les Mis was a shrewd preemptive strike against having to read the reviews.

This time he spares himself the East River, but this new part is all wrong for him, too. That beefiness of his still bespeaks power, but here it’s not city-hall muscle you sense. It’s Wall Street shadiness. Who would vote such a tan, oily douchebag to run their city? He’s in the wrong movie. Crowe should be manning heavy weaponry in Arizona. He should be playing the bellicose sheriff, not the sleazy mayor.

Filed Under: Series, The Last Stand