The Winners’ History of Rock and Roll, Part 3: Bon Jovi 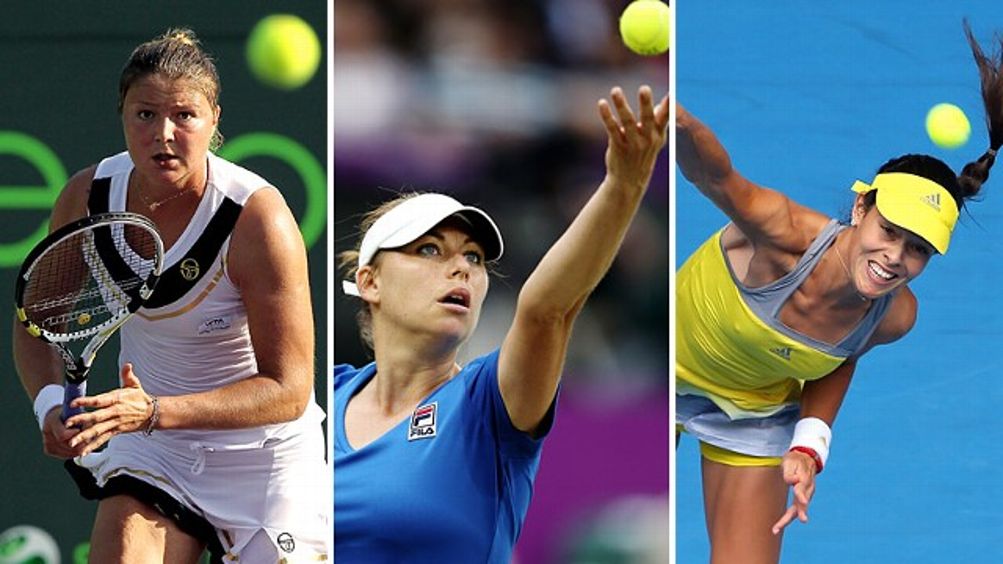 There were so many. They came in Cylon-attack-fleet numbers, Gustave–Doré-drawing-the-angels-of-the-Paradiso numbers; you had to count them in schools, like fish. Every Grand Slam season seemed to introduce three or four new ones. Petra Kvitova. Ana Ivanovic. Vera Zvonareva. One would win a major, then fall back into the group. Three or four or five years later, maybe she’d win another. In the meantime, 300 more would emerge. Collectively, they were the future of women’s tennis. Individually, none of them ever quite managed to be the present.

The New York Times, which profiled all of them, simultaneously, in 2010, thought they were hard to keep straight because they were Russian or Eastern European and because they had long names. But that was a little unfair to American tennis fans, who had, after all, more or less managed to keep track of Martina Navratilova. Really, they were hard to keep straight partly because there were so many Russians and Eastern Europeans, and partly because none of them managed to dominate the era in a way that asserted even a rudimentary hierarchy. Ivanovic took over the no. 1 ranking by winning the 2008 French Open, then went 17 straight Grand Slam tournaments without reaching another quarterfinal. That sort of thing seemed to happen all the time. Jelena Jankovic and Dinara Safina both reached no. 11 without ever winning a major. Svetlana Kuznetsova won two majors, the 2004 U.S. Open and the 2009 French, without ever reaching no. 1.

Who could follow any of this? It was chaos combined with unmanageable numbers of Belarusians — the most chaotic chaos of all.

In the 39-year history of the WTA, only 21 women have ever been ranked no. 1. Four of them are Russian or Eastern European players whose reigns began in 2008 or later.2 That in itself attests to a troubling disorganization. But it goes so much deeper. Throughout this period, you knew — you knew — that any focused Williams sister or focused and healthy Kim Clijsters or focused and healthy and non-prematurely-retired Justine Henin would smoke the semi-anonymous Russian/Eastern European field. That, in other words, there were a few truly lethal competitors in the sport and none of them were Daniela Hantuchova. Fifteen of the current top 30 women’s tennis players3 are Russian or Eastern European, but the list of majors by player since 2004 looks like this:

Look at those numbers in conjunction with the WTA standings over the last eight years and you see a sport with a rankings system that has, for various reasons, come unglued from any reasonable measurement of top-level skill.4 There are great players, who, again for various reasons, disappear from the game for long stretches but tend to win everything when they’re around. Then there are good players who emerge to fill the void when the great players aren’t around. And — this is the bizarre part — those sparks-in-the-vacuum players are Russian or Eastern European to a hugely disproportionate degree.

Quick example: Wimbledon last year. To win the final, Serena Williams, who was then ranked no. 6, had to go through Barbora Zahlavova Strycova (Czech Republic), Melinda Czink (Hungary), Yaroslava Shvedova (Kazakhstan), Petra Kvitova (Czech Republic), Victoria Azarenka (Belarus), and Agnieszka Radwanska (Poland). The only non–Eastern European player she faced was Zheng Jie of China, in the third round. Any of the last three players she beat — Kvitova (the defending champion), Azarenka (the world no. 1), and Radwanska (the rising young star) — could easily have won the tournament, had she not been in it, which she could easily not have been. Against the three of them, she dropped one set. And this sent her skyrocketing in the rankings … to no. 4.

Imagine a world in which Novak Djokovic, Andy Murray, Rafael Nadal, and Roger Federer dominated men’s tennis — but everyone else on the tour was Canadian. Now imagine that because of Nadal’s trick knee and the fact that Federer took 30 months off for paternity leave, Milos Raonic and Jesse Levine were nos. 1 and 3 in the world. Disorienting, right? This is only a slight exaggeration of the situation in women’s tennis over the last several years.

American reporting on the rise of the R/EE battalion tends to imply that it is in some way a problem, that the concurrent collapse of American tennis at all levels not represented by a Williams sister makes this a sort of mild parable of globalization: We thought we’d perfected this, but there were just so many of them.5 Or else it’s portrayed as a commercial headache for the WTA: How can women’s tennis, most of whose fans are in the U.S. and Western Europe, market a group of non-stars from some snowy concrete elsewhere? It used to bug me a little as a matter of game methodology. Even granting that one of the fun things about having tennis rankings is the space they open for a doesn’t-give-an-eff maverick to breeze into two tournaments a year ranked no. 74 and win every match in straight sets, if you’re going to have them at all, they might as well sort of work. Too perfect is worse than broken where sports rankings are concerned, but you can’t just dump Serena Williams, year after year, behind a small army of hard-working Transylvanians who gritted their way to the quarters at the Citi Open and the Family Circle Cup while she was in the hospital or at Fashion Week in Paris or whatever. Or you can, but I hope you have a really straight mouth to go with your joyless proceduralism, Larry.

So it used to bug me. Lately, though? I’ve had a total change of heart. This may sound like a non sequitur, but I keep thinking about the ballet. I love ballet,6 and my favorite ballet is George Balanchine’s Symphony in C, which he premiered in 1947 with music by Bizet. There’s a long passage at the end of Symphony in C that’s one of the funniest and most beautiful things you will ever see in a theater. A couple is dancing in the center of the stage. Then two more ballerinas enter, then two more. I mean classically perfect, sylphlike ballerinas, floating on their toes. Then two more come in. Then two more. The choreography gets more and more involved as more and more ballerinas glide out onto the stage; it’s like someone in the wings is blowing bubbles and every bubble is a ballerina. They keep coming; it’s ridiculous. It’s as if Balanchine is saying, “You think of the ballerina as a sealed-off, abstract ideal, but look! I can give you more. I can give you an overload of the ideal. Let’s see what it feels like!”

What I love about this is not just that it’s beautiful while also being hilarious; it’s that the hilarity is a vital part of the beauty, that the giddiness comes from the astonishing excess of loveliness on display.7 Ballet may have the lead on tennis when it comes to abstract beauty, but it’s got nothing on tennis when it comes to pure silliness, and focusing on nationality and, like, naming conventions is as silly as tennis gets. So why not embrace the excess?

I’m picturing the camera view from the blimp over Melbourne Park. All those blue hardcourts lined up like towels at the beach. Azarenka is playing Makarova on Laver, radio-controlling the Russian from the baseline, ripping huge two-handed ground strokes. On Hisense, Radwanska is struggling against Kirilenko, trying to find the range for her dinky little angle shots. At Margaret Court Arena, we’ve got Kvitova hanging on against Ivanovic, and Niculescu’s leading Cetkovska on one of the outer courts. None of these matches makes a ton of sense. Half the crowd doesn’t know which is Kvitova and which is Ivanovic,8 even though they’ve both won majors.9 Anything can happen on any of these courts, because any of these players can do extraordinary things, and any of them can completely fall apart. Roll 1d20 for amazingness, every day. And isn’t that what’s great about a tennis tournament in the first place — that you can gather an astounding number of really good players in one well-manicured place, make some rough guesses about ability, get everything neatly lined up, and then let disorder break out?

I mean, in a way, what could be more wonderful: that with almost no warning, this one arbitrary region of the world started producing such a wealth of tennis talent that we can’t even keep the competitors straight. And who cares if the brackets of the Slams have gone hieroglyphic as a result?10 This is a singularly strange era in women’s tennis. But as long as new Makarovas, Hantuchovas, Shvedovas, and Pavlyuchenkovas keep floating out onto the stage, I’m onboard with the strangeness — with this weird and seemingly inexhaustible richness that reminds me of tennis itself.