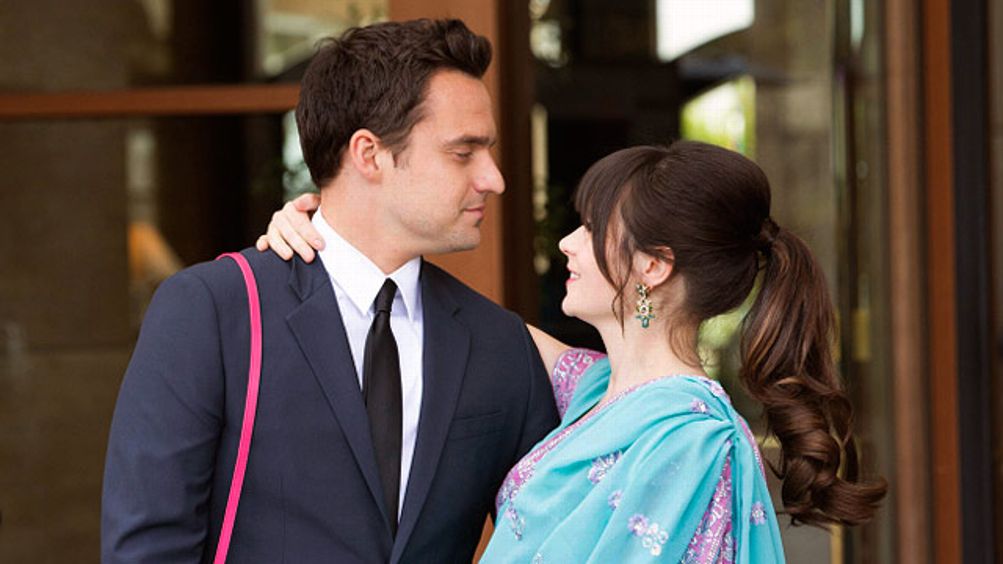 Hey, Internet. Have you heard? Nick and Jess had sex last night! And the only correct response is, Of course they did. Sex is the de facto fifth roommate on Fox’s New Girl. It lurks in the coed bathroom, chills in the beer-filled fridge, and haunts the silk-lined spaces between Schmidt’s lovingly hung suits. No network sitcom is as bawdy or as bold when it comes to bedroom talk. Not to mention bountiful: Even before last night’s belated bonk Nick Miller had amassed a Rolodex that could double as the Maxim 100, Winston had put a jumbo box of borrowed condoms to good use, and Schmidt had both broken his schwartz and proved he didn’t need it by describing a manual stimulation technique so vivid it made a lesbian gynecologist blush. When the series began, Zooey Deschanel’s Jessica Day was a cutesy disaster who thought being sexy meant humping plants and being dirty meant singing songs from Patrick Swayze movies. An early plot point involved her inability to say the word “penis.” Now she can’t get enough of them.

In such a charged environment, it’d be more of a surprise if two of the roommates didn’t wind up splitting the electric bill. Indeed, one of the most impressive things about what has become one of the very best shows on television is the way it treats late twentysomething life with exactly the right mix of playful respect and eye-rolling mockery. Intimacy here is as slippery as Schmidt’s econo-size jar of lube, and drinking is mostly a game, one with clothing-optional rules. The characters are young enough to waste a day camping out in an unclaimed parking space, old enough to know better, and yet bored and directionless enough to do it anyway. It’s the friction of all that free time that fuels the comedy and adds a grace note of yearning to all the carefree boning. Unlike more prurient sitcoms of the past, on New Girl — original title: Chicks and Dicks — sex isn’t something you save for when you’ve got things figured out. It’s one of the very best ways to do the figuring.

Though viewership has dipped in this second season,1 both the quality and degree of difficulty have increased exponentially. It’d be far easier for creator Liz Meriwether and co-showrunners Dave Finkel and Brett Baer to care less and snark more. After all, in the buzzy ecosystem of low-rated, high-tweeted sitcoms, speed long ago trumped sentiment. But recent scripts have bumped up against age-appropriate bummers like fertility2 and mortality like Cece against Winston’s protruding pogo. It’s a delicate balance familiar to any youngish adult, the desire to get serious colliding with an overriding urge to keep things casual. And now, with the burgeoning Nick/Jess affair, Meriwether & Co. have steered into a freewheeling sitcom’s most treacherous curve of all: the dreaded “will they or won’t they.” The closing moments of last night’s episode answered that question fairly definitively. Yet why does it feel as if New Girl‘s challenges are only just beginning?

The earliest TV comedies never asked the “will they or won’t they” question. What was the point? It was obvious they all already had. The nature of Ricky Ricardo and Lucille Ball’s relationship was right there in the title, Father had always known best, and The Honeymooners banged and zoomed but never shook up their marriages let alone ventured into outer space. That romance was a settled issue on sitcoms was partly a factor of the times, but it was also a factor of being a sitcom: For the first few decades of the medium, the situation was the family. Episodes were pumped out at a premium with plots that were easily resolved before the credits ran and even more easily forgotten before they started up again the next week. To tinker with the status quo or muck around in the messy middle of things wasn’t just bad for advertisers, it was bad for business. Stability was the goal back then, not serialization.

That began to change, slowly at first, in the ’70s when social issues came to the fore and then faster, in the ’80s, as they diminished again. Television was now just as much an irritant as a balm and stories inched closer to representing the messiness of life, not an idealized version of it. Out of this came Sam and Diane on Cheers, the prototypical “will they or won’t they” couple. Watching them banter was like watching mantises flirt: You were never sure if it would end in sex or violence (and it was never clear which outcome they preferred). Eventually, enterprising producers across the dial realized that an unrealized romance is the best way to add weight to a comedy without sacrificing lightness. Makeouts and misunderstandings could serve the same audience-gluing purpose as gunshots and cliffhangers; they were ways to imperil beloved characters by breaking their hearts instead of stopping them.

But even the most exquisite foreplay can eventually become excruciating. Moonlighting has become the standard-bearer for this sort of audience blue balling, which is a bit unfair: That show’s quality was well in decline by the time Bruce Willis and Cybill Shepherd finally got around to thrashing around on the floor and smashing lamps.3 (Since creator Glenn Gordon Caron left before the start of the next season, they may as well have been switching those lights off instead.) Contrary to conventional wisdom, it wasn’t the consummation that killed this show, it was the anticipation. Moonlighting probably could have found a second wind if it hadn’t been so stingy with a first kiss. As with most things related to the boudoir, timing is everything. It’s why I was surprised when Nick frenched Jess — spectacularly, I might add — midway through the show’s second season,4 and why I was even more surprised to discover that this wasn’t so sudden after all. It turns out, Sam and Diane sucked face in Cheers‘s Season 1 finale, Rachel kissed Ross tamely in the fifth episode of Friends, and they only waited 25 more episodes to have it happen again, with feeling. Lacing the laughs with a potential romance early provides stakes that one-liners and fat suits — even spectacular fat suits — never could. In retrospect it really doesn’t seem to matter if sitcom couples do or don’t: It’s TV. They will. What really matters is what will happen next.

Cheers was saved from the perils of answering this question when Shelley Long departed in 1987. Her exit ripped Diane away from Sam quickly and cleanly, like a Band-Aid, freeing him up for new love and, more crucially, new stories. Ross and Rachel weren’t so lucky. Years of gargantuan success left the Friends producers clinging to the promise of a romantic resolution for the characters like a gunslinger down to his last bullet. By the time Rachel got off (yet another) plane and arrived (once again) at Ross’s door in the 2004 finale, their decade-old flame was as hot as an anti-griddle. The Office, after a subtle three-year symphony of longing looks and artfully tussled hair, had the temerity to actually leave well enough alone when it came to Jim and Pam, embracing the conventional happiness that reliably follows a dramatic courtship.5 It’s a tough spot for producers to find themselves in, either chasing the initial high of a coupling or learning to accept its impermanence. The first part of any relationship is unquestionably the most entertaining; there aren’t many funny fifth-kiss stories. Timing may be everything in successful television pairings, but time is invariably their enemy.6

Still, I remain bullish on New Girl‘s prospects, even despite Jess’s amusingly meta cry of “ruh-row” from beneath the sheets. For one, the show is unlikely to run even half as long as any of the aforementioned sitcoms. Its creative advances have yet to translate into sustained ratings success, so having Nick and Jess jump into bed now is a lot more rewarding then having them fail to make the leap at all.7 But what’s been most thrilling for me has been watching Meriwether, Finkel, and Baer strive and flail to discover an elegant way out of the knots they themselves tied.8 Dropping the puck on Nick and Jess’s ongoing game of tonsil hockey has pushed the show to ecstatic, delightful highs such as the lusty hardware store shopping list from “Quick Hardening Caulk” (“long-shafted drive gel,” “new nut wrench,” etc.) as well as discordant, weird lows (the hyper-aggressive, Dermot Mulroney–disrupting dinner in “First Date”; the questionable subcontinental drift of “Table 34” ). Occasionally the pent-up mania of the characters’ situation seems to have bled into the writing room, leading to New Girl spinning off its axis entirely: There were moments of the schizoid “Chicago” (Nick’s recently introduced father, the perfectly cast Dennis Farina, dies; Jess sings Elvis at the funeral) and last night’s otherwise inspired “Virgins” (Farina returns for some posthumous whoremongering) that felt cut-and-pasted from another, lesser sitcom entirely.

Overall, though, the manic struggle of Nick and Jess either to master their feelings or surrender to them with a modicum of cantaloupe-smashing dignity has been a delight. Jake Johnson is an unconventional leading man, a sly and sardonic performer who actually improves the closer he gets to breaking. His gift for hilarious anger has been artfully co-opted of late; now instead of reaching for a put-down, he grabs for Jess like a robbery victim for a baseball bat or a thirsty man for his last beer. And catchphrases aside, Deschanel actually plays tough much better than twee. Pushing their story to the front — and, when necessary, freaking it like a Portlander to a Lisa Loeb song — has taken some of the pressure away from MVP Max Greenfield, who has at times seemed to be sweating through his Axe deodorant in an attempt to carry the show. Now he’s free to haunt the margins (and college ex-girlfriends) and mispronounce words in blessedly douchey peace. Schmidt remains the most consistently funny character on New Girl (just as Winston remains the most frustrating),9 but true consistency means an ability to spread the story around.

If the sheer number of hastily created GIFs are to be believed — and when have they not been — audiences are over the moon about the seaworthiness of the good ‘ship Nick and Jess. But sitcom audiences, like Schmidt’s former sex-boss, are rarely satisfied. Giving in to what they want is often a way to make them change their minds. And it’s worryingly easy to see all the ways in which the pleasures of a paired-off Nick and Jess could quickly curdle. But here, I think, New Girl has an advantage over previous “will they or won’t they”s. It’s a show about weird sex moves and strangely serene Asian men, about crotch-selfies and David Foster Wallace gags. But most of all it’s a show precisely about changing your mind and all the richly relatable, deeply hilarious embarrassment that can come from it. This time last year Schmidt and Cece seemed inevitable. Now I wouldn’t mind if they never traded safewords again. Similarly, the whiskey-soda pairing of Nick and Jess is absolutely a love story; sex will change a lot of things between them, but it won’t change that. I’d buy them together for the long haul as quickly as I’d adjust to seeing them broken back apart. New Girl is the rare show able to do justice to both the night before and the awkward morning after.