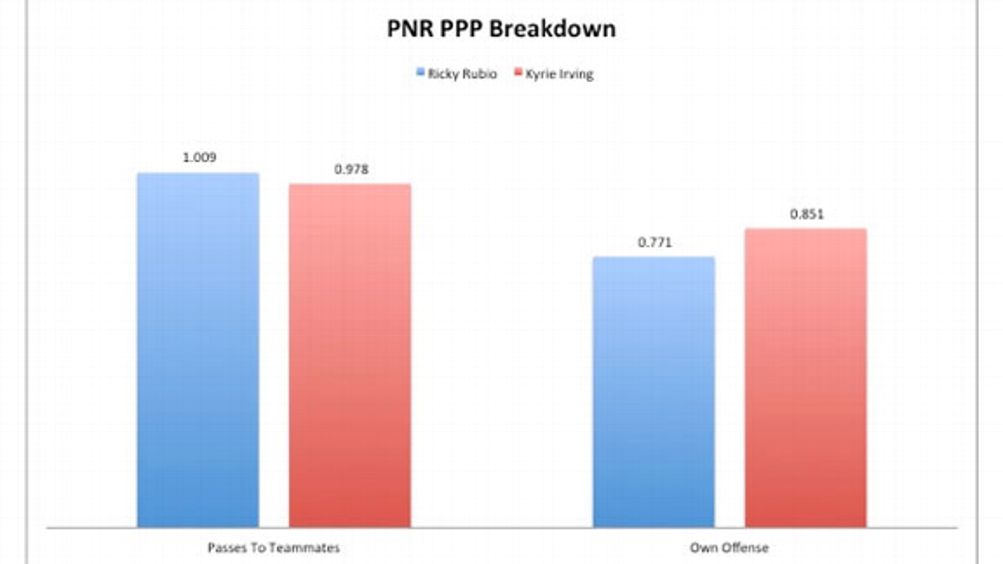 Since the NBA took four days off for its All-Star break last week, there weren’t enough games on the schedule to warrant a new edition of Rookie Rankings. Instead, we’re going to evaluate this year’s crop of NBA rookies over the first half of the season. Two themes stick out about this rookie class: First is the battle for Rookie of the Year between Ricky Rubio and Kyrie Irving; second is the number of young big men who have earned spots in their teams’ rotations. While all these players have found ways to be effective on the court, they also have flaws in their games that they’ll need to improve to take the next steps in their NBA careers.

Since the start of the season, Kyrie Irving and Ricky Rubio have been at the top of these rankings. Although both players are point guards, they play the position in very different ways. The best example of how their games differ is probably the pick-and-roll, a play they each run on about 40 percent of their offensive possessions. What’s interesting is that Irving and Rubio run the pick-and-roll almost equally well — they just get their results differently. Rubio, who typically looks to make a pass that leads to a score when he uses ball screens, posts 0.919 points per possession (PPP) on pick-and-roll plays. Irving, who often looks to score when he comes off a screen, is posting a PPP of 0.911. To highlight this difference, look at how often Irving and Rubio shoot and pass in pick-and-roll situations. 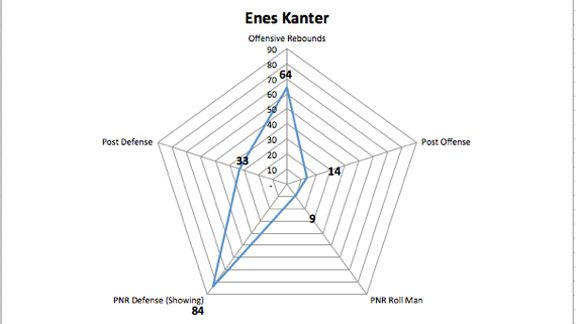 This chart, using data from Synergy Sports, confirms that Rubio gets his teammates involved more than he creates for himself and that Irving does the reverse. The following chart shows just how efficient these guards are when they play to their strengths. 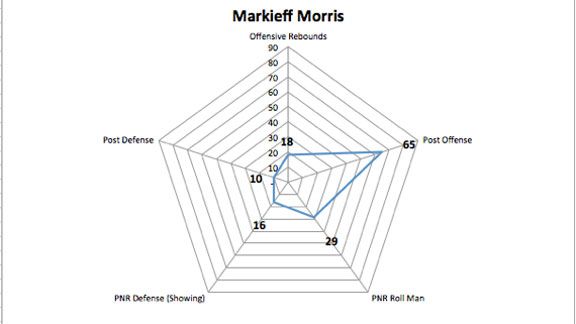 Here, we see that the Minnesota Timberwolves average more points per possession when Rubio passes out of pick-and-rolls than the Cleveland Cavaliers do when Irving does the same. Irving, however, is more efficient when he looks to score than Rubio is when he shoots off the pick-and-roll. You might be thinking that Rubio has Kevin Love and Minnesota’s platoon of athletic wing scorers to pass to, so it’s easier for him to be a pass-first point guard than it is for Irving, who has lesser targets in Antawn Jamison, Omri Casspi, and Anderson Varejao. That’s not the case. When you watch Rubio and Irving play, it becomes clear that these are two point guards who affect the game in different ways.

When Rubio comes off screens, he keeps his head up and surveys the defense. He usually isn’t looking for space to create his own shot; instead, he is reading the defense to find the right opportunity to pass to an open teammate. Even when Rubio drives to the rim, he’s still looking for teammates, and if the defense overcommits to stopping his attack, Rubio will kick out a pass to his open teammates.

Irving, on the other hand, is looking for his shot before anything else. If he comes off a screen and sees open space in front of him, Irving will pull up for a jumper. He also looks for holes in the defense to attack so he can drive to the basket. He scores well in both situations, and the way Irving attacks screens and looks to score makes me think that it’s just his style to play that way. Likewise, it’s Rubio’s style to always have an eye out for the assist.

The Bigs With Something Missing

The biggest surprise of this year’s rookie class has been the number of quality big men it has produced, and that’s not even counting the Toronto Raptors’ lottery pick Jonas Valanciunas, who is playing overseas this season. Enes Kanter, Markieff Morris, Bismack Biyombo, and Gustavo Ayon (as well as Chandler Parsons, Nikola Vucevic, Kenneth Faried, and Ivan Johnson, whom we won’t have space to examine) have all impressed their teams and earned more playing time as the season has progressed. However, none of these rookies has a complete game, and each has a hole in his game that needs to be addressed. 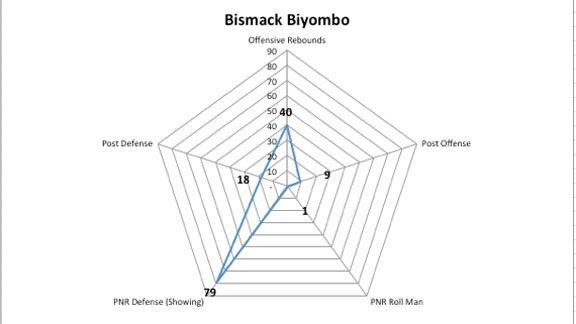 As I mentioned in last week’s rookie rankings, Kanter is excellent at showing against ball handlers who are coming off screens. He’s also a decent post defender and does a decent job of finishing putbacks. Kanter struggles, however, when he posts up and when he catches the ball while rolling to the rim.

Kanter lacks finesse, and he hasn’t yet learned the moves (or perhaps gained the coordination) to catch the ball and then take it to the basket. On the block, Kanter resorts to trying to bull his way to the rim, which leads to offensive fouls and other turnovers. When he rolls to the rim, Kanter seems to need an extra dribble to reach the hoop, and that extra bounce gives defenders time to bother Kanter’s shots. He can improve by becoming more aware of help defenders and not taking an extra dribble when they’re near; Kanter also needs to develop a better touch around the basket. This would allow him to shoot from a few steps farther back instead of always needing to dribble as close as possible to the rim. 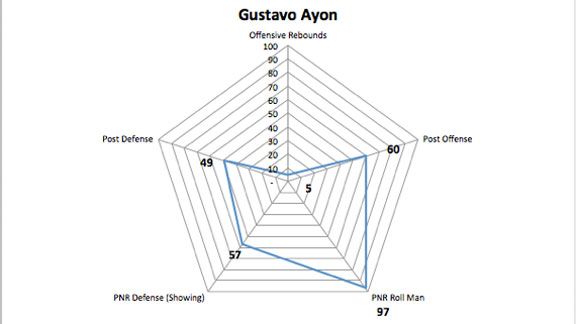 Markieff Morris seems like Kanter’s basketball mirror image. Morris’ biggest strengths are posting up and spotting up on offense. He struggles, however, on defense, especially when he defends the post. In those situations, Morris is just in the 10th percentile in terms of PPP allowed.

Morris’ biggest defensive shortcoming is that he fouls too much. According to Synergy, Morris fouls 20.9 percent of the time when he defends the block. Morris tends to be jumpy on defense. He falls for pump fakes and makes it easy for offensive players to get him off balance and out of position. Smarter offensive bigs are using this to draw fouls against Morris. Second, Morris reaches in too much. Yes, big men are expected to be physical when fighting for position, but once an offensive player has caught the ball in the post, putting a hand on him is a foul. Morris keeps his hands on his man too long, and it leads to excess fouls. 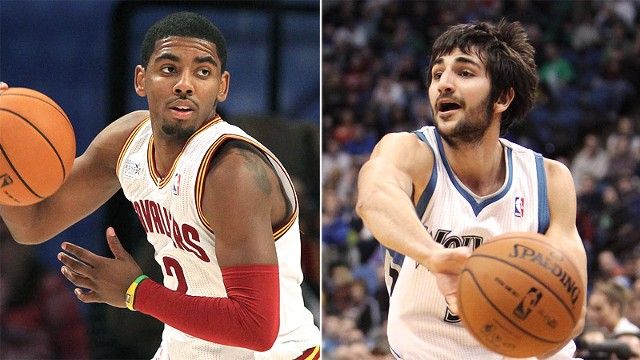 If Bismack Biyombo’s chart looks familiar, that’s because it’s nearly identical to Kanter’s, except Biyombo is slightly less effective in each category. Biyombo is at his best when he is putting back offensive rebounds and using his mobility to show against pick-and-roll offense. He struggles, however, with anything related to offense aside from putbacks, and Biyombo’s PPP when posting up and rolling to the rim are in the NBA’s bottom 10 percent.

Biyombo must work on the mechanics of his post game. For starters, he is way too upright. When Biyombo fights for position, he gets low and uses his lower body to create and occupy space. But once he catches the ball, Biyombo leaves his stance and becomes too straight. This makes it easy for defenders to nudge Biyombo away from the basket and out of scoring position. Biyombo’s inability to gain ground in the post forces him to take some incredibly difficult shots and leads to a low efficiency rating. 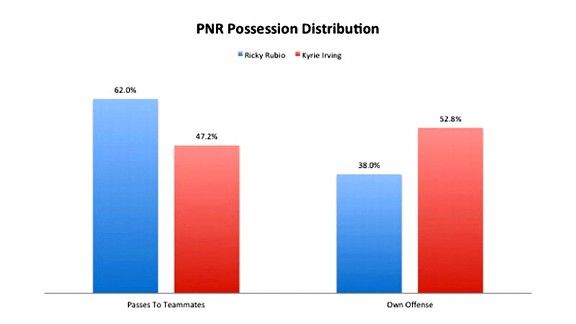 Gustavo Ayon is an interesting player. In many important categories, his numbers look impressive. While most of the big men we’ve mentioned are specialists who excel in one area or another, Ayon has a more complete game. He plays the pick-and-roll well and he’s a decent post player. On defense, Ayon isn’t great — nor is he terrible. But Ayon has one glaring weakness, and that is his inability to score off of offensive rebounds.

Ayon is incredibly active on the offensive glass. He does a great job of putting himself in position to get a hand on every shot that comes off the rim. The problem is that Ayon usually only gets one hand on the ball, so he tries to tip it back in. This prevents him from ever gaining full control of the ball, and it keeps him from converting putbacks at a high rate. If Ayon can rebound with both hands, he might get his fingers on fewer balls, but he will be more accurate with the putback attempts he does get, and will also be able to kick the ball out, reset the offense, and give his team extra possessions.