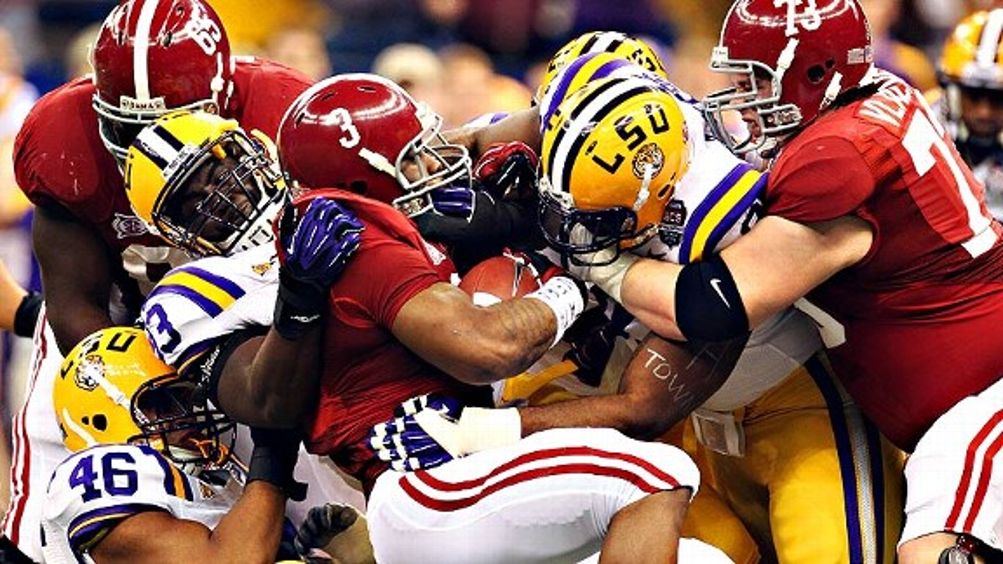 An image I cannot shake: On Sunday morning in New Orleans, the cabal that pulls the Bowl Championship Series strings held one of those day-before press conferences where the opposing coaches are forced to pose together in front of the championship trophy. It was awkward as hell, and if you listened real close, you could almost hear Nick Saban’s teeth grinding in sync with the camera shutters. But then came a revelation. During the Q&A session, Saban informed the media that he and his wife set their alarm for 6:15 every morning, and then lie in bed and watch the Weather Channel for 30 minutes before rising to greet the day.

This is what I will think about when I think about Nick Saban from here on out; this is the sort of punctilious anecdote that will define his mythology. Who watches the Weather Channel for 30 consecutive minutes other than retirees, storm-chasers, and control freaks? Saban is the best coach in college football precisely because he is an unapologetically maniacal perfectionist; he is, as he said after winning his third national championship, entirely “process-oriented,” a “day-to-day guy” — and a day-to-day guy doesn’t leave the house without knowing whether there is a warm front pushing across the southern plains. Saban joked that sometimes his wife spends that half-hour lecturing him precisely on what he’s doing wrong, both as a football coach and a human being, but I keep imagining him tuning her out and daydreaming of Oklahoma drills while the “Local on the 8s” music tinkles in the background.

Late Monday night, after Alabama’s 21-0 mauling of LSU in the BCS Championship game, Saban sat at another press conference in the bowels of the Superdome and nearly managed to suck the joy from the moment. Someone asked him if this was the greatest defense he’d ever coached, and rather than slipping into the emotional … well, tide … of the moment, the coach said, “I don’t like to make comparisons.” Someone asked about the Crimson Tide’s kicker, Jeremy Shelley, whose five field goals comprised all of the scoring until the final five minutes of the game, and Saban said, “He does a pretty good job, for the most part.” Someone asked about his quarterback, AJ McCarron, who had been utterly ordinary all season and suddenly looked like Bart Starr, and Saban said, “It wasn’t about AJ. It was about what we needed to do to win the game.”

Even at the pinnacle, Saban does not concede anything. (The closest he came was when he referred to this team as “enjoyable to coach,” largely because he found his defense to have a vicious mean streak, even though he’d sometimes become frustrated during practice when they’d “get a little hurt.”) He is above gushing, and he often appears to be above good cheer, and this is why he is adored by his own fan base and despised by all others. There are three categories of game film in the Saban library — Good, Bad, and Ugly — and even though his defense may have turned in one of the greatest performances in modern college football history, the coach said he’d sure find a few defensive plays for the Ugly files.

“I can always find something Ugly to talk about,” he said.

This is part of Saban’s day-to-day. There is always a storm front pushing behind the sunshine.

Saban walked off, escorted by three police officers. A couple of miles away, on Bourbon Street, the party raged, an army of drunken fans from Muscle Shoals and Dothan and Birmingham no doubt crooning along to ill-advised Skynyrd covers. Meanwhile, the coach did a neat bunny hop onto the back of a golf cart, hair slicked back in a Gatorade pompadour, and his wife sat next to him, and off he went, no doubt thinking fastidious thoughts.

On Sunday, during his own Q&A, Les Miles apologized for answering a simple question poorly, and then he waxed philosophical on the nightclub brawl that caused the early-season suspension of Jordan Jefferson and threatened to derail what had been LSU’s greatest regular-season run in decades. It was actually quite insightful, even as Les groped for the words, even as it devolved into a series of non sequiturs about how we all think we’re impervious and then “you’re at the decision-making of others”; and how his players sometimes “break the rules of normal people” because they don’t feel like normal people; and how he takes contact poorly but his players take contact well.

And then someone asked Miles what he thought of Nick Saban. This question comes up all the time, and is a source of endless fascination for both fan bases, since Les succeeded Saban at LSU when Saban bolted for the NFL, and now they have become the Felix Ungar and Oscar Madison of the SEC.

Les didn’t answer the question, because no coach ever honestly answers a question about another coach. Just as Saban is probably not quite as fussy as we make him out to be, Les is probably not as unhinged as we would like him to be. He deflected, but he did so in a way only Les Miles could. He said this game transcends personality or style. He actually said — and I am not paraphrasing here — this game transcends stuff. And with that, the Tigers coach, all gussied up in suit and tie like a seventh-grader on his way to a bar mitzvah, thanked the assemblage and walked out of the room.

Out on Bourbon Street, many of the LSU faithful politely (or not-so-politely) disagreed with their coach’s assertion. Monday afternoon, a man held aloft a sign with Saban’s face morphed onto a photograph of Osama bin Laden. That may seem harsh, but this is how they roll in the SEC; Harvey Updyke, the unhinged Bama fan who poisoned the iconic trees on the Auburn campus, showed up in the French Quarter on Sunday night and was hailed as a celebrity. All’s fair in southern football, and no game transcends stuff, and New Orleans was at its chaotic peak in the days and nights leading up to this one, the fan bases intermingling with both southern gentility and a simmering undercurrent of real hatred. One local hotel owner said he hadn’t seen demand like this since the last Super Bowl came to town. It was, essentially, a regional Super Bowl. (“You know what’s harder than beating Alabama twice?” I heard an LSU fan say to an Alabama fan. “Y’all beating us once.” I still can’t figure out if this makes any sense.)

Still, this was LSU’s home turf, and it seemed like this was LSU’s game to lose. They’d plodded through that 9-6 victory in the teams’ first meeting on November 5, and it sure seemed like Les had wormed his way into Saban’s cranium, forcing Saban to run a trick play, a wide receiver pass that backfired. “I look at that first game as more of an opportunity for us to learn,” Saban had said on Sunday, and so on his first two offensive plays of the game the coach rolled out McCarron and threw to the tight end, challenging the LSU secondary — most notably cornerback Tyrann Mathieu, who had so inspired with his As-Seen-On-YouTube nickname that some misguided soul actually dressed up in a Honey Badger costume and sweated his way through the French Quarter on Monday afternoon.

Here was the team that wasn’t supposed to give a damn, playing in the city that doesn’t give a damn, bottled up by their ex-coach’s finicky game plan. It was a listless evening for Les. He didn’t pull out any tricks, and he didn’t even feel bold enough to shake things up at quarterback, asserting that he needed a scrambler like Jordan Jefferson rather than a pocket passer like Jarrett Lee against Alabama’s relentless pass rush. Afterward, he even had to endure a lecture from (of all people) Bobby Hebert, the former Saints quarterback turned impolitic local radio host, who opened the press conference with a question that morphed into a harangue about Miles’ coaching failures.

I will admit: I was in the room when Hebert asked this question, and I had no idea who he was. If it was just an anonymous fan who slipped into the room unnoticed, I have to imagine the Honey Badger (who was also at the podium with his coach) would have taken him down like an errant skunk. I cite the transcript, which I think encapsulates the disarray of LSU’s evening (the question marks, I’m assuming, are where Hebert got so angry that he lapsed into Cajun):

Q. Coach, did you ever consider bringing in Jarrett Lee, considering that you weren’t taking any chances on the field? Now, I know Alabama’s defense is dominant. But, come on, that’s ridiculous, five first downs. I mean, so it’s almost an approach, I’ll tell from you the fans’ standpoint, that how can you not maybe push the ball down the field and bring in Jarrett Lee? So what if you get a pick six. It seems like the game plan that ?? not pushing the ball down the field, considering it’s like a Rueben Randle or Odell Beckham, Jr. I know the pass rush of Alabama, but there’s no reason why in five first downs ?? you have a great defense, LSU is a great defense, but that’s ridiculous.

THE MODERATOR: Do you have a question?

It is not a stretch to say that this was the darkest and most unpalatable season in college football history, and it is not a stretch to say that we are in the midst of an era of transition, what with the possibility of a plus-one game on the horizon and the notion of euthanizing the BCS actually gaining momentum. Of course, perhaps that’s all wishful thinking on my part, and perhaps college football is hopelessly screwed. Perhaps this hopey-changey optimism makes me more Les Miles than Nick Saban, more dreamer than pragmatist. But then, this is Saban’s gift: He drags us all back down to earth. Amid the chaos of this fall, the questions about the system and the rematch and the urge to mythologize coaches and the fundamental premise of college sports, Alabama’s coach remained imperturbable. Other teams rang up so many points against each other that it veered on pornography. Saban adhered to his own process, measured and cautious; he lost when it didn’t matter, and won when it did, and he did so with five field goals and one garbage-time touchdown. You may not like him, but you have to respect that, in a sport driven by misplaced emotion, the man always knows when to carry an umbrella. He will be remembered as the greatest coach of this era because he won a number of big games in the sort of methodical fashion that makes them very easy to forget. And maybe, when you think about it, the only way to end this season was with a frustrating anticlimax.