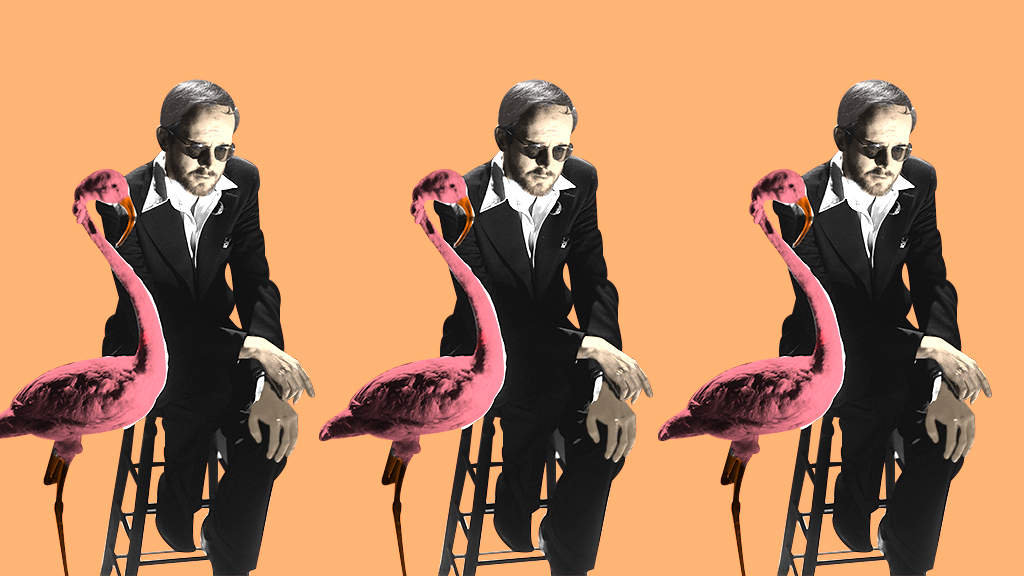 Right from the start and in crucial ways, Saturday Night Live wasn’t really the radical break with earlier TV comedy it’s sometimes cracked up to be. So far as countercultural guerrilla humor goes, L.A.’s forgotten Firesign Theatre came a lot closer to being the real deal. Heck, so did Cheech and Chong.

Compared to either, SNL creator Lorne Michaels — no hippie, he — just grafted a new set of generational in-jokes and touchstones onto pretty tried-and-true showbiz formulas. Boomers craving something to identify with on what people still called the boob tube mistook the result for mold-breaking entertainment mainly because it (a) looked unkempt, and (b) catered to their groupthink, which wasn’t as insurrectionary as all that by 1975.

Sure, the show’s debut season was adventurous enough to book a then for-cultists-only Patti Smith. But two years later, Gilda Radner was burlesquing her as “Candy Slice,” and doing so from a perspective not markedly different than, say, Dean Martin mocking those upstart Rolling Stones for his paunchy fans’ benefit. By then, championing someone like Smith was already outside SNL’s comfort zone.

To have expected anything else was foolish; mass mediums don’t change their spots. Neither do the careerists who prosper in them. Still, that isn’t to say the mix was all namby-pamby by a long shot. Albert Brooks’s short films were definitely envelope-pushing stuff, and so were America’s first baffled ganders at Andy Kaufman’s performance-art brand of comedy. Even if Michaels tried to dictate his choice of material, Elvis Costello did get his first national showcase on SNL, and so on.

Yet if anything warped, unpredictable, and truly disdainful of mass-audience pieties got spewed forth in Saturday Night’s early years, odds are it originated in the inventively dark brain of Michael O’Donoghue. While others may have shared his belief that SNL ought to be all about “DANGER” — his caps, not mine — he’s almost certainly the only one who suffered for it. That makes him the unlikely patron saint for people who kid themselves into thinking that TV isn’t all about comfort zones.

The show’s head writer from 1976 through ’78, O’Donoghue — born in 1940, a bit early for the Summer of Love to turn his IQ into mush — was no hippie, either. You’d be tempted to call him the Ivy League’s answer to Frank Zappa if he hadn’t been an Ivy Leaguer merely by association once Harvard Lampoon alums Henry Beard and Doug Kenney invited him to join the new National Lampoon’s founding stable in 1970. A University of Rochester dropout, O’Donoghue claimed credit for inspiring those “Harvard snot f​-​-​-​-​ts” to throw caution to the wind and get busy drawing blood. “It was I that taught them that the true essence of comedy is a baby seal hunt,” he later boasted, and anyone as intellectually vain as he was really should have learned how to speak English more good. National Lampoon begat The National Lampoon Radio Hour, which begat the theatrical revues Lemmings and The National Lampoon Show, which begat SNL.

O’Donoghue’s first step to never quite becoming a household name had been as the author of a satirically lewd comic strip bearing the Zappa-ish title The Adventures of Phoebe Zeit-Geist, which appeared first in Evergreen Review — one of those echt-’60s blends of rudeness and literary cachet — and then, in book form, in 1968. Garry Trudeau has cited it as an inspiration for Doonesbury, though O’Donoghue probably wasn’t wowed by the intended compliment. Trudeau is the kind of born popularizer who reacts to his edgier influences by watering them down, not taking them a step further. 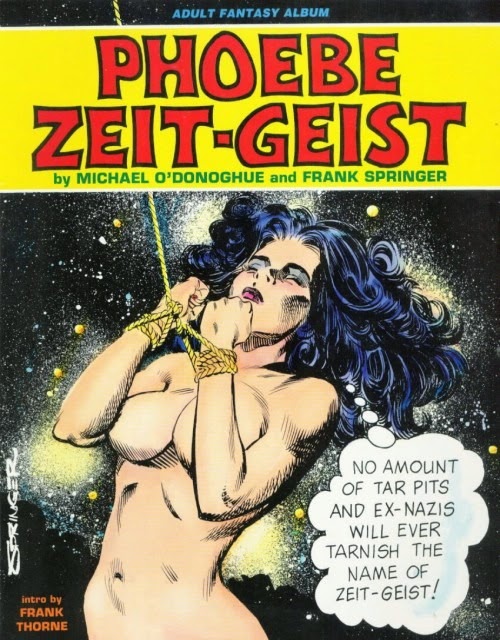 Without knocking popularizers — it’s a useful job unless you want everything on the fringe to stay that way forever, untainted by average people’s pleasure — that was to be the fate of O’Donoghue’s work in every medium. Once he was ensconced at National Lampoon, his contributions stood out for being at once bleaker and more depraved than the magazine’s usual gazpacho of collegiate showing-off — brother, were those guys ever smug about having T.S. Eliot’s greatest hits at their fingertips — and happily lowbrow sexism. The combination struck gold with a virtually all-male readership of horny, smart-ass 1970s undergrads who were just beginning to catch on that familiarity with T.S. Eliot and an inability to get laid might not be unrelated phenomena.

The same demographic also worshiped Woody Allen, O’Donoghue’s fellow snob in crowd-pleaser’s clothing. But the comparison only gets you so far. When it came to their most noticeable shared obsession — death, the metaphysical version of the Times crossword puzzle to one and a punch line to the other — O’Donoghue’s mercilessness made Allen look genteel. Exhibit A was National Lampoon’s immortally sick “The Vietnamese Baby Book,” whose only joke is the newborns’ imminent maiming and/or demise at America’s hands.

Nonetheless, it took TV exposure to identify O’Donoghue as the dandyish nihilist — crusading on behalf of nothing except arrogance and revulsion — he essentially was. Putting over an unrepentantly specialized sensibility to a nationwide broadcast audience wasn’t unprecedented; take a bow, Paul Lynde and Tom Lehrer. But O’Donoghue’s version, unlike theirs, was seemingly undiluted by any interest in whether he amused us.

You had a vivid impression of watching someone who wasn’t a professional entertainer. This was a gifted head case who’d found a forum within which to untwist his psychodrama’s pretzels by unleashing a contempt that implicitly or even explicitly extended to the people tuning in, especially those rash enough to think that he and they were simpatico. The O’Donoghue Express wasn’t designed for passengers.

As I recall, the first time I ever saw him doing his thing was his now-fabled sketch about Tony Orlando and Dawn — the papmeisters best known for “Knock Three Times” and “Tie a Yellow Ribbon” — being blinded by white-hot knitting needles. Then again, to call it a sketch is to imply structure, which the bit did not have. It was all about O’Donoghue slapping his palms over his eyes and screaming “AUGH! AUGH! AUGH!” after the barest of setups, and not the work of a man showing off his craft. It was the work of a man showing off his, shall we say, art — an ability to give us an image so irresistibly unconscionable that the rest was just chaff.

Yet the joke also combined hysteria and sentimentality, two countercultural vices to which O’Donoghue was mistaken to think he was immune. The idea that acts like Tony Orlando and Dawn, who never did anyone any harm — or even the Osmonds, who probably did — are Antichrists worth boiling in oil is fundamentally silly, after all. It’s also basic to the adversarial style of subcultural vanity that got its post-WWII start with Holden Caulfield’s sneers at “phonies” and pretty much ended when Kurt Cobain blew his fool head off.

In a roundabout way, sharing that attitude was O’Donoghue’s version of romanticism. But even if the disdain was ultimately fatuous, his way of expressing it was memorably grotesque. Soon, just like all SNL regulars, he had a patented character: “Mr. Mike,” a corrosive cynic who sometimes delivered his nuggets from café tables and sometimes turned up in a segment called “Least-Loved Bedtime Tales.”

As a comedian, which he basically wasn’t, he didn’t have much equipment. He used his beard and shades as a substitute for facial expressions, and his voice was a monotonous snarl. Yet his indifference to those limitations was what made his routines so singular. When you watch him recite “The Little Train That Died” to then 14-year-old guest host Jodie Foster — one of the relatively few Mr. Mike bits available on YouTube — you can’t help being struck, first off, by how loose and game Foster was. But more fascinating is O’Donoghue’s impatience with the mechanics of performance and refusal to engage the audience even perfunctorily. Foster’s giving him a lot to react to, but he barely acknowledges her presence even though she’s on his lap. He just wants to spin his tale of ghoulish mayhem and be done with it.

No doubt, that’s a big part of why Mr. Mike never became lovable at the Pavlovian level that soon had audiences squealing with delight whenever John Belushi showed up in his samurai togs. Whenever SNL had to choose between edginess and crowd-pleasing, crowd-pleasing won, which was only natural. The show was a commercial proposition on a Bigfoot TV network, not an underground cabaret that had somehow lucked into having an audience of millions. Who’d be naive enough to think any different?

O’Donoghue, that’s who — a man otherwise in revolt against naïveté. Being part of the cherished TV institution that SNL was rapidly morphing into suited his temperament about as well as a glue trap suits a cockroach. Yet the I-wish-I-could-quit-you paradox — since he kept coming back to try peddling his wares again, and never did relinquish hope — was that he’d plainly found a home he wanted to cling to. On his terms, which was where things got delusional. 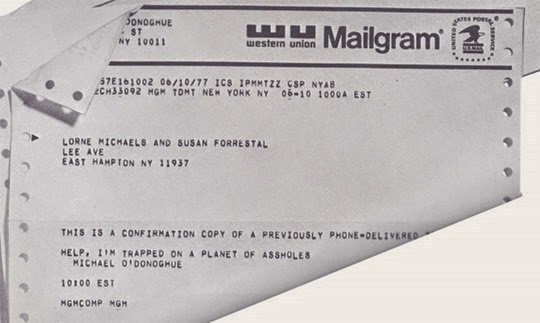 It’s not just that showbiz is no place for idealists. Good old Phoebe Zeit-Geist was up to her usual tricks, and by the late seventies, O’Donoghue’s spiteful alienation was dating badly even as a pose. In his case, a pose was just what it wasn’t, guaranteeing that creative evolution wasn’t in the cards. He’d been the beneficiary of a fluky cultural moment when his conversion of despair into arrogance and vice versa could command a select — but not small — audience. Once it ended, he was as archaic as Alice Cooper.

After leaving SNL the first time in 1978, he worked on a variety of projects, including a screenplay for Chevy Chase — the same guy he’d notoriously attacked as a sellout, as if that term ever had any meaning so far as Chase’s agenda went — that ballooned to more than 200 pages before the actor called it quits. But only one reached the screen: Mr. Mike’s Mondo Video, originally devised as a one-hour NBC special and padded to feature length once the network took a pass. He went back to work for SNL in 1981 and then again in 1985, but his tenure both times was brief and acrimonious. Not to mention, even by his standards, bizarre: Handed the reins in ’81, O’Donoghue proclaimed himself “Reich Marshall”; wrote a marathon, never-aired sketch comparing NBC head Fred Silverman to Hitler — in this context, Nazis on the brain are pure megalomania, folks — and verbally terrorized the cast to the point that SCTV alum Catherine O’Hara quit before ever appearing on the air. Whatever you make of his other antics, anybody who deprives us of Catherine O’Hara has one hell of a lot to answer for.

Once he and his white whale had parted company for good, O’Donoghue told the New York Times that SNL had become “an embarrassment. It’s like watching old men die.” Did he think he’d been in the Clash or something? Nobody would get that bitter except somebody bonkers enough to idealize SNL in the first place. But if O’Donoghue did, it’s no surprise, since people like him don’t find homes very often. That’s why it’s no fun to be shipped back to the pop-culture orphanage, his permanent abode by the time he died — aged just 54 — in 1994.

It would be hard to make a case that he was a thwarted genius done in by the biz, because there’s no denying that — even in his prime — a little of O’Donoghue went a long way. He was essentially an aristocrat in a populist medium, making it remarkable he had any sort of TV career in the first place. But Phoebe Zeit-Geist’s love of surprises can open and then close some awfully strange doors. Mr. Mike stepped through one of them, incarnating the bohemian contradiction of craving acceptance from a world you despise.