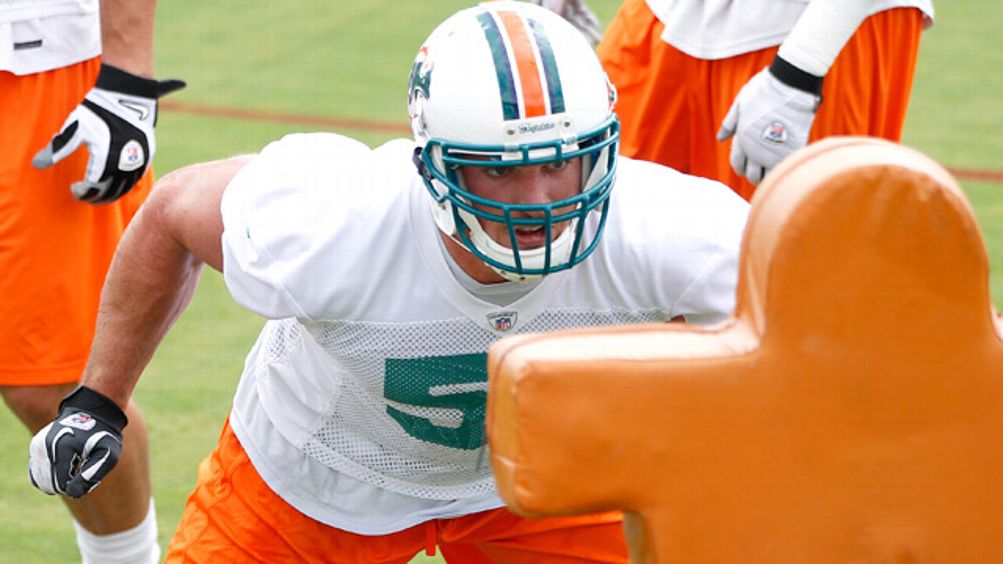 Why are we all so sure that the Miami Dolphins are going to be irrelevant this year? Admittedly, 6-10 teams that bumble through the offseason don’t often get a ton of attention, but the Dolphins have been absolutely buried amid the usual bloviation surrounding the Jets and Pats, with Mario Williams and the Bills occupying whatever AFC East gab space remains. Their primary roles for this upcoming season appear to be filling out the schedule and serving as an easy joke for lazy sportswriters.1

As you might suspect, I don’t think that’s the case. Despite that 6-10 record, the Dolphins were a much better team in 2011 than people realize. In many ways, they were unlucky and/or limited by the context that surrounded them. And while they are certainly a flawed team, their chances of making a serious impact on the 2012 season are limited more by the incompetence of their management than their actual ability on the field.

2.5 — That’s the number that should give every Dolphins fan a smidgen of hope for the upcoming season. The number represents the difference between the six wins that the 2011 Dolphins accrued and the 8.5 wins their point differential would suggest they would have won, per their Pythagorean expectation. Miami outscored their opposition by 16 points last season. That’s in a ballpark with the Bengals (21 points) and Jets (14 points), and it’s well ahead of the Super Bowl champion Giants, who were outscored by six points during the regular season. Historically, point differential has been the best indicator of a team’s future performance, something that came into play for the Dolphins after their miserable 0-7 start to the 2011 campaign. Despite the miserable record, Miami had a point differential of -59; that’s bad, but not as bad as it might seem. Since 1988, no 0-7 team had put up a better point differential than that -59 figure, and sure enough, the Dolphins started playing better, as they finished 6-3 over their final nine games.2

Anyway, let’s put that 2.5-win difference in context. No team in football had a larger negative gap between the number of games they were “supposed” to win and their actual win total than the Dolphins. Teams with a difference of two to three wins between their actual win total and Pythagorean expected win total have, since 1978, improved by an average of 2.4 games during the following season. Last year, three teams fit into that category: the Bengals, Packers, and Titans. The Packers showed just how dramatic an improvement can be made if you switch from coming up short of your Pythagorean expectation to exceeding it. The 2010 Packers actually had a better point differential and resulting win expectation (12.1 wins) than the 2011 team (11.9 wins), but while the Super Bowl–winning team came up 2.1 wins short of their projection, last year’s team exceeded theirs by 3.1 wins. The Pythagorean expectation holds that those two Green Bay teams played at about the same level during the regular season.

You probably know which statistical barrel comes next. What were the Dolphins like in close games? As is almost always the case with teams who drastically underperform their Pythagorean expectation, Miami was terrible in the tight ones. Although you might only remember that famously awful collapse against Tim Tebow and the Broncos in October, a closer look at the slate shows that Miami was a dismal 2-5 in games decided by one score or fewer. Twenty-five other teams since ’78 have also gone 2-5 in those close games; during the following season, they went 90-83 in those same games.

Also, none of those losses were of the variety where the losing team trails the entire way before tacking on a late score to claim a “close” loss. (Hi, 2011 Panthers!) The Dolphins blew fourth-quarter leads in narrow defeats by the Browns, Broncos, Giants, and Cowboys, and their three-point loss to the Patriots came after Miami led 17-0 at halftime.

You may have noticed that there are some pretty good teams among those that eked out wins over the Fins; playing the two Super Bowl contestants that close before losing is nothing to sneeze at. Miami played a very tough slate last season, with games against the NFC East joining their four contests against the Patriots and Jets. They played just five games all year against teams who finished with records below .500. Football Outsiders rated the Miami schedule as the league’s sixth-hardest last season. This year, the same site projects the Dolphins to have the eighth-easiest schedule in football. While Miami is stuck amid a tough division, they get to play the AFC South and the NFC West, with their two placement games coming against the Bengals and Raiders.

Back to that Broncos game for a second, though. There was an incredibly unlikely occurrence in that game, but it wasn’t the miraculous Tebow-led comeback that stood out as a rare sight to see. Something happened during that contest that didn’t happen in any other game all season: The Dolphins defense recovered a fumble! Twelve fumbles hit the ground while the Miami defense was on the field last year, and Yeremiah Bell’s recovery against the Broncos was the only one on which Miami managed to fall. Forcing fumbles is a skill, but recovering them is mostly luck; you’d expect the Dolphins to recover six of those 12 fumbles, and the odds of them recovering one or none of the 12 are a little under 500-to-1. That is probably the first time in NFL history a team has recovered so few fumbles in a given season.3 And while it might be tempting to chalk that up to a team that wasn’t motivated and was playing for a lame-duck coach, consider that the Miami offense and special teams combined to recover exactly 16 of the 32 fumbles that occurred while they were on the field. The Miami defense will surely pick up more loose balls in 2012, opportunities that will lead to better field position, fewer points allowed, and the possibility of defensive scores.4

Those of you who are penciling in the Bills ahead of the Dolphins in the AFC East might also want to go take a gander at the play-by-play logs from those two games. There were 10 fumbles in those two games, and the Bills managed to recover nine of them. That’s stunning. You know what else is stunning? The Dolphins still managed to win both those games by a combined total of 34 points.

The Dolphins might also have some nice momentum coming off of their much-improved second half. Remember, during the first eight games of the season, Miami went 1-7 while being outscored by 31 points. During the final eight games of the year, they went 5-3 and outscored their opposition by 47 points, for a point-differential swing of 78 points between the two halves. Is that extraordinary? Is it meaningful?

Unfortunately for Dolphins fans, the answer is “No” on both counts. While the Dolphins certainly looked better in the second half, they only had the third-biggest point-differential swing in the NFL between halves last season, as they were beaten out by the Patriots (95 points) and Seahawks (a whopping 132 points). Although it stands to reason that teams that drastically improve in the second half would carry over that success to the new season, it’s not actually true; teams that improved their point differential by 100 points or more over the second half of a given season have actually declined by an average of a half-win during the subsequent 16-game season. Teams that suffered 100-point drops from the first half to the second half also declined by a half-win, though, so I wouldn’t put much stock in a dramatic rise or fall in the second half of a season meaning much of anything for the following year.

OK, so we know that the Dolphins’ record and point differential improved in the second half, even if it doesn’t necessarily augur success in the upcoming season. But what aspect(s) of Miami’s play actually got better during that second half? Football Outsiders splits performance between Weeks 1-9 and Weeks 10-17 in its DVOA database,5 something that actually comes in handy right about now. Here’s how Miami ranked on offense and defense over those two periods:

Well, that’s pretty clear. Was there a certain aspect of the defense that stepped up their game? Again, here are their ranks by DVOA during the two halves:

That’s even clearer. Miami’s pass defense morphed from grotesque to gorgeous across the season’s halves. This could have happened by random chance, but there’s a very telling coincidence that I think might have had something to do with it. Cornerback Vontae Davis isn’t on Darrelle Revis’s level, and he can lack for consistency, but he has borderline Pro Bowl talent. And during that first nine-week stretch, Davis missed four games entirely while being forced out of two other games with injuries.6 Davis made it back for Week 10 and didn’t miss a single game the rest of the way. The dramatic difference in DVOA obviously overstates Davis’s impact, but he’s an enormously valuable player to the Dolphins who makes them significantly better when he’s healthy and in the lineup.

It’s safe to say that the defense will probably be good, even as they shift from a 3-4 to a 4-3. The biggest personnel question for the Dolphins, of course, is what they do at quarterback. Miami was clearly less than fond of incumbent Matt Moore during the offseason, as they drafted Texas A&M product Ryan Tannehill in the first round and have signed former Jaguars starter David Garrard to compete in a three-way dance for the starting job at quarterback. Now, just for fun, take a look at the table below, which holds the stats for three quarterbacks from the 2011 season.

Player A is Matt Moore. Player B is Matt Schaub. Player C is Jay Cutler. Would Matt Schaub or Jay Cutler invite serious competition from the likes of Garrard or Tannehill? Of course not. I’m cheating a bit here — Moore checks down too frequently, and he takes too many sacks — but Moore’s far more qualified for the starting job than his competition. Moore isn’t going to be a star quarterback, but he’s been a league-average starter in 2009 and 2011. If the Dolphins cut him and go with Garrard7 or Tannehill, they’re probably going to be a six-win team. If they stick with Moore and he gets 14 starts, I think that the Dolphins have a very good shot of making the playoffs. It’s really that big of a difference between Moore and the others.

That’s a big if, of course, since the Dolphins seem committed to organizational ineptitude.8 Even if Moore wins the job in camp, the team will probably bench him for Tannehill after a bad quarter or two. Remember all those nice things I said about Vontae Davis? He’s running with the second team in camp. New head coach Joe Philbin could be a breath of fresh air, but the dysfunction lies above his pay grade, where owner Stephen Ross9 is one of the more clueless billionaires in football. In all reality, the Dolphins will probably screw things up and fail to get out of their own way. Just know that there’s a good team waiting for the right opportunity here. If they can catch even a couple of breaks, the Dolphins could even become relevant.