The Tight End Revolution Will Be Televised 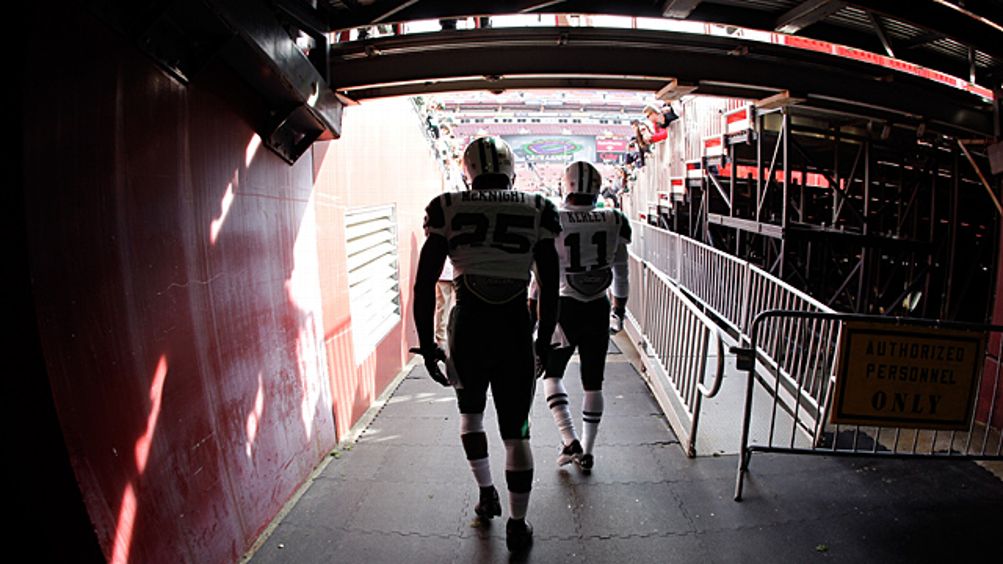 In May, the National Football League shared some surprising news with the same group of retired players that had spent the past two years launching lawsuits against their former employer: The vast majority of them are living longer than the general population. A study conducted by the National Institute for Occupational Safety and Health (NIOSH) found that NFL players from the ’60s, ’70s, and ’80s were dying far less frequently than men of similar ages and races from the general population. The study — initially commissioned by the NFL in 1990, released in 1994, and then updated in 2007 — quickly became national news, as it arrived just days after the suicide of former Chargers star Junior Seau.

NIOSH’s study, published in the American Journal of Cardiology this past March, found there was a statistically significant difference between the number of NFL retirees1 who had died by the end of 2007 and the figure that was expected, given the mortality rates of the general U.S. population. Researchers noted that NFL players were substantially less likely to suffer cancer-related deaths; the study found just 85 players passed away from the cause, against an expectation of 146.8. Meanwhile, players also had healthier hearts, as 126 players died of cardiovascular disease when a total of 186.2 was expected.

Those two findings both highlight the limitations in the NIOSH study and emphasize why additional research is needed. It’s no surprise that football players have healthier hearts than average Americans; they’ve spent decades building up cardiovascular strength in ways that the broader population likely hasn’t. They’ve also enjoyed access to top-notch doctors and health care options during their NFL careers. While the league’s pension system has come under some scrutiny, NFL retirees are more likely to have health insurance than men of a similar age, particularly given their ability to pay for private insurance. It seems likely that increased availability to health care would mean that ex-players could receive more frequent cancer screenings, which would lead to early detections and more successful treatments.

Although the NIOSH study did an excellent job of comparing NFL players’ cardiovascular vitality to that of the general public, the headline-stealing takeaway about players living longer than members of the general population was a comparison of apples and oranges. If you’re trying to figure out whether the mortality rates of NFL players are linked to their occupation, you need to compare apples to apples — you need to compare football players to American residents of similar size, with similar athleticism and access to health care. There’s a sample of people that mostly fits that definition: baseball players. While football players have consistently outweighed baseball counterparts by about 35 pounds over the past 50 years, their athletic backgrounds, earnings potential, and access to health care are far more similar than the relationship between professional athletes and the general population.

Our study, then, will examine whether football players have experienced a mortality rate that is significantly different from their athletic brethren in baseball. The null hypothesis is that there is no significant difference between the mortality rates of players over the timeline in question.

While access to NIOSH’s study is readily available, the data used to compile their work is not. As a result, we2 had to re-compile it using publicly available databases and other sources. That meant we had to make some notable changes that might change our findings. They included the following:

Differences in the Player Pool
NIOSH’s study included all NFL players from 1959 through 1988 who completed five or more pension-earning seasons. Because the NFL doesn’t publicly share information about the members of its pension program, we had to determine what a pension-earning season was. For the purposes of this study, we defined such a season to be one in which the player participated in five or more games during the given year. These slightly more stringent terms produced a smaller sample; while NIOSH’s study includes 3,439 players who fit the qualifying criteria, our study analyzed 3,088 players.

The Absence of Irrefutable Proof of Death
NIOSH culled information from the IRS, the Social Security Administration’s Death Master File, and the National Death Index — all databases that weren’t available to us. Instead, we turned to other sources to verify a player’s death. The websites Pro-Football-Reference.com and OldestLivingProFootball.com each purport to track the deaths of NFL players on a year-by-year basis. We cross-referenced these databases against each other to make one list, and then compared that to the historical player pages at NFL.com, which exist for every player in league history and indicate whether a player has died.3

In those cases where there was a discrepancy between an NFL.com page and the other sources,4 we verified the player’s status via obituaries and grave information. In all but four cases, we were able to locate a reliable source of death information for the player in question. Those four players without reliable information available were excluded from the study.

Player Information
We had to record identifying characteristics for each player, including his height, weight, date of birth, and games played during each of his respective seasons at the professional level. We used data from Pro-Football-Reference.com and checked it against the aforementioned NFL.com player pages.

Additional Deaths
In addition to utilizing private sources of mortality information, the research in the NIOSH study was completed at the end of 2007, even though it wasn’t published until March of 2012 and was only really publicized in football circles when the league included a summary of the findings in a monthly newsletter sent to retired players. Our work is current as of August 1, 2012, and naturally, additional players have died during that nearly five-year stretch.

Unavailability of Cause of Death
While the NIOSH study broke down the cause of death for each deceased NFL player on a case-by-case basis, we don’t have access to that information. So though their study compared causes of death with the general population, ours will instead focus on the percentage of players who passed away in each sport.

We also had to build a similar structure for baseball data that emulated the football research. That meant we ran into similar concerns, such as:

Creating an Appropriate Player Pool
We needed to analyze baseball players with five years of experience or more from 1959 through 1988. Because MLB pension information also wasn’t publicly available, we defined a qualifying season to be one in which a player recorded either 100 plate appearances (PAs) or 30 innings pitched (IPs). If a player had five such seasons between 1959 and 1988, he was then included as a member of the player pool in our study.

Identifying Proof of Death
Baseball has a much richer history of independent historical research than football, primarily thanks to the Society of American Baseball Research (SABR). To verify deaths within our player pool, we cross-checked their information against work by SABR researcher Bill Lee, which we found both in his book The Baseball Necrology and on his website, thebbnlive.com. We verified statistical and physical information against the Baseball-Reference.com database and the publicly downloadable Lahman database.

Demographic Data
Race5 influenced the expected mortality rates in the NIOSH study. We don’t have access to that demographic data and, as a result, are unable to include it.

After identifying the players in each group and researching their status, we were able to calculate the mortality rate for each group under the prescribed time frame. What we found was surprising:

The difference is even more staggering when we specifically focus on football players who shared the most similar body types to the majority of the baseball players we examined. Referring again to the Body Mass Index included in the heights and weights table above, the average BMI for the qualifying baseball player in our study during his career was 24.6, and the standard deviation was 1.6. Players within two standard deviations of the average had a BMI within a range of 21.4 to 27.7.

On the football side of our work, 1,182 of the 3,088 players fit into that BMI range. Of those 1,182 players, 115 have passed away — just 9.7 percent. That’s stunning: Football players from 1959 to 1988 who had similar body types to the vast majority of baseball players from the same era are living longer than their contemporaries — despite the relatively brutal nature of their sport.

We can’t say the same about football players who were outside of that BMI range. Of the 1,901 players who had a BMI during their playing days that wasn’t between 21.4 and 27.7, 279 have passed away; 14.7 percent. That’s roughly similar to the mortality rate of the baseball sample. It’s also worth noting that not a single football player had a BMI outside that sample that was below 21.4; every player in this 1,901-person group had a BMI greater than 27.7. That increased mortality rate for football players with higher BMIs is disconcerting, considering that the average BMI for a player has risen from 29.1 to 31.5 since the end of the study.

Our work is also subject to several limitations that should be considered in context with the meaningfulness of its statistical findings.

Because the scope of the study is only on player mortality, there is no consideration for quality of life for those players who are still living after participating in either sport; both have a right to report significant joint pain and arthritis. The stories of players like Conrad Dobler are familiar to football fans and represent a suffering that is unquestionably caused by years of playing the sport. A 2009 study reported that 80 percent of NFL retirees between the ages of 30 and 49 experienced some sort of joint pain lasting most of the day, nearly four times the rate reported by non-NFL players. NFL retirees over the age of 50 were more than twice as likely to report joint pain as non-players. It would be relevant to study whether the quality of life enjoyed by baseball players after their retirement is superior to that of football players.

There’s also no variable in this study accounting for the recent rash of suicides that’s caused the NFL and the American public to raise concerns about the frequency of concussions and head trauma within the league. NIOSH’s study reported that nine of the players who fit their time frame had passed away due to “self-harm,” which was well below the 21.8 incidences that would have been expected from the rate produced by the general population. Since NIOSH finished gathering data at the end of 2007, though, at least three players who would fit the criteria for this study (Dave Duerson, Mike Current, and Ray Easterling) have committed suicide, as has Junior Seau (also ruled a suicide), whose career started too late to be included in this study.

Finally, it’s also not clear that the mortality rate that existed for players in this set of studies is necessarily indicative of the mortality rate for players who debuted after 1988. Although football players continue to hold a BMI that is about 20 percent larger than that of baseball players, their sheer size might lead to an increase in heart disease and other health problems commonly associated with obesity. In the NIOSH study, players with a BMI over 30 were twice as likely to die from heart failure as players with a BMI under 30. Nowadays, the average NFL player’s BMI is approaching 32, and the trend shows no sign of stopping. NIOSH’s initial study focused on players through 1988 because it started in 1990; future studies in this vein should begin to include players from subsequent generations to get a more accurate view of what medical challenges might face the modern player.