The Many Lives of Donald Westlake

Welcome to the Retro Photo Diary 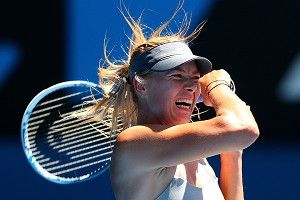 David Beckham always looks impossible; Maria Sharapova only looks impossible most of the time. With Beckham, the situation and the camera angle don’t matter. He could be about to win the Champions League or he could be stewing on the sidelines or he could be walking through an airport wearing a beanie, but he’s always the vaguely digital confection of eyebrows and cheekbones that you see on Armani billboards. He’s a parody of a parody of movie-star masculinity, James Bond as imagined by the blind. He’s self-objectifying, which is why he’s an alarming figure even though he’s not only harmless but also a little ridiculous. He makes you feel that beauty so sustained and commercial is a mild form of ongoing suicide.

With Sharapova, the image is not nearly so invincible. It wobbles. Sharapova brings the plane of sports almost as close to the plane of pure culture as Beckham does — she has the same gift for taking our fantasies about the sexuality of famous athletes and nudging them toward something else, something glamorous or witty, so that we can indulge them without being too overt about it. This gift encourages a mutual exploitation (we get to look, they get to live in palaces) that Beckham makes seem like an identity; he’s secure inside what Pauline Kael, writing about Robert Redford, called “immaculate self-absorption.” Sharapova makes it seem like a job, which is more interesting. At moments of difficulty or stress, when the circumstances are wrong or simply when she’s not paying attention, the magazine gloss drops away and you see a human depth. She has higher priorities than her own attractiveness. She needs to win; she needs to be a winner. For that reason, it’s fascinating to watch her lose.

She lost Thursday,1 in the Australian Open semifinals, 6-2 6-2 to China’s Li Na, who dominated every phase of the game. Li is another player who seems like a movie star, but in her case, she’s a slapstick comedian, the quickest and quippiest interview on the WTA Tour. (“The truth is, I’m younger than you,” the 30-year-old Li told Rennae Stubbs when Stubbs mentioned her age in the post-match interview.) Li has a tendency to drop away in big matches, to out-think herself; earlier this year, she played Sharapova in the final of the Italian Open and lost after winning the first set and taking a 4-0 lead in the second. But just as you’d expect the screwball heroine to show up the high-class heiress when it counted, Li ran Sharapova ragged Thursday. Sharapova doesn’t move well, so Li sent her chasing from one end of Melbourne to the other. Sharapova’s one idea was to attack Li’s forehand, normally one of the more haywire shots in top-level women’s tennis. But Li’s forehand, which has improved under her new coach, Carlos Rodriguez, held up. It was Sharapova who was forced repeatedly to hit lunging, on-the-run forehands that generally wound up missing. She got frustrated and committed six double faults and 32 unforced errors. On match point, she walloped a makeable backhand return right into the net.

We are surrounded, much of the time, without much thinking about it, by images of beautiful athletes being beautiful. That the bodies of athletes should be fascinating to sports fans isn’t surprising, of course, since it’s their bodies that we’re paying to see catch touchdowns and hit fadeaway jump shots and so forth. It’s also not surprising that this would sometimes have an erotic dimension, though the erotics of sport is harder to talk about. What’s surprising, when you think about it, is the extensiveness of the world of representations that sports beauty generates, its ubiquity and intensity. Think of the global mechanics, the interplay of economic systems that results in, say, Sharapova lying tumbled on the floor in a tulle ballet skirt surrounded by Cole Haan leather goods — everything of which that image is an endpoint, meetings in conference rooms, freighters leaving China, fluctuations in the price of paper. It’s breathtaking. Maria in a swimsuit. Maria in a T-shirt. Maria cradling her face. Inescapable, total, and meaningless. There you are in the checkout line. The proliferation of images is its own sort of superhuman power. But George Clooney never has to leave Photoshop. It’s only in sports that the bright centers of this two-dimensional universe have to step out in front of us and grunt and sweat and be made to look imperfect, or even foolish, by the z-axis and Li Na’s unshakeable forehand return.

So: Thursday. Sharapova looking flushed and confused. The worldwide distribution of Nike products nowhere on her mind. Still beautiful, but not “beautiful” in the way that even a very sad or disappointed David Beckham is always “David Beckham being upset”; not iconically beautiful. She looks like a woman losing a tennis match, which is what she was. What you think of, watching this, is what it must entail, being a transcendent superstar. What weird days. Because it’s a skill, as much as playing tennis is a skill; it has to be. It’s not a state of being, or else it wouldn’t flicker in and out of effect. It means, at some point, thinking about how to hold your hands in the right suggestive-but-who-knows-why position to make men who want to see you naked want to buy the Tag Heuer watch you’re wearing for whomever they see naked in real life. I mean, getting good at that. Waking up to hit tennis balls in the morning, then climbing in the back of a car someone sends for you and driving to some huge warehouse-like space where you will spend the afternoon tilting your shoulder toward a wind machine. More: learning how to be gracious about this, how to take directions, how to push back. How not to go insane when you see your own face everywhere you look.

Sharapova is very, very good at this, and seems to have become good at it without losing her head to it completely — it’s compartmentalized. It’s seldom on the court with her, which is one reason it’s still so easy to root for her eight years after she first won a major. But it’s strange, imagining her treating her own objectification as a skill. In part it’s strange because compared to Beckham’s, her beauty isn’t inherently seductive, isn’t even inherently sexual. Beckham’s wry eyebrows are always inviting you to share some private joke (which, as soon as you hear him speak, you realize doesn’t exist); he’s always provoking a response, trying to draw you in closer. Sharapova’s beauty seems much more often like the simple enjoyment of inhabiting a perfect body, which is another reason she’s easy to like. She can have a sense of humor about it; she has enough perspective to see the absurd side of her own fame.