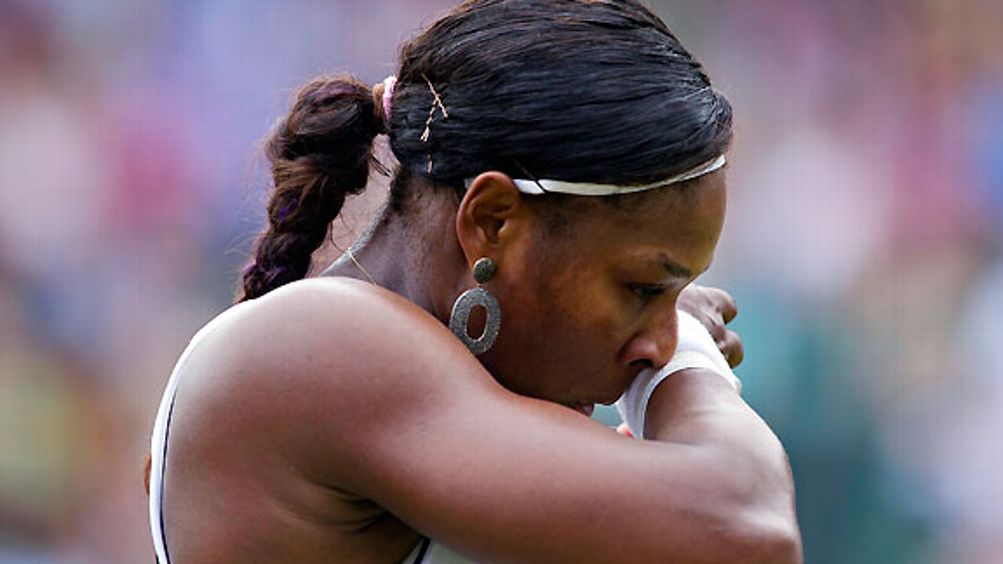 Monday marked the first day of Wimbledon’s second week. It lived up to both of its nicknames: Magic Monday, one of the finest days of competition at the All England Club, and Manic Monday, the day when everything can go totally nuts.

ALL THE SINGLES LADIES, ALL THE SINGLES LADIES: Serena and Venus both lost in straight sets Monday, meaning that for only the third time in the past 12 years, a Williams sister won’t win Wimbledon. The frenetic Marion Bartoli ousted Serena 6-3, 7-6 (6) and Venus followed with a 6-2, 6-3 loss to Tsvetana Pironkova, a coltish Bulgarian dressed in a bubble skirt that resembled a diaper. Top-seeded Caroline Wozniacki took the first set against the diminutive Dominika Cibulkova (“She’s listed at 5-3,” Brad Gilbert said, “but I’ll tell you what: that’s on a stack of books.”) but wilted thereafter. Maria Sharapova, meanwhile, appeared more cool and collected. She defeated Shuai Peng 6-4, 6-2 and watched a potentially contentious quarterfinal matchup with Wozniacki fade away.

THE BAD NEWS AND THE GOOD NEWS: It’s notable that the fall of the top-ranked Wozniacki was less surprising than the same-day defeats of the Williams sisters. Wozniacki might hold the no. 1 ranking, but she has never claimed a Grand Slam title (Wimbledon was her 18th attempt.) It’s hard to really believe in the world’s “best” player, hard to ignore this monkey on her back. “I didn’t go onto the court thinking I was playing the world no. 1,” Cibulkova said after earning the upset. “I went on thinking that I was playing Caroline Wozniacki, who I’d beaten this year.” While Wozniacki’s loss Monday played neatly into the women’s-tennis-in-crisis meme that occasionally rears its head, things could have been worse for the WTA. The state of women’s tennis isn’t so unsettlingly woeful that Venus and Serena can casually dominate the entire Wimbledon field after spending months — or in Serena’s case, nearly a year — out of competitive play. Still, it’s comical that with the loss, Serena’s world ranking falls to 180. And she didn’t quite see the silver lining: “Yeah, I’m superhappy that I lost. Go, women’s tennis!” she said sarcastically to a reporter who asked if she could appreciate how her defeat might in some way be good for the game.

PARENTS MAYBE ACTUALLY UNDERSTAND: The annals of tennis are filled with, um, unorthodox parent-child relationships. Marion Bartoli and her father are no exception. After dropping the first set of her third-round match to Flavia Pennetta, Bartoli threw an on-court tantrum that culminated in an angry gesture directed at her parents, signaling that they should leave the stands. Her parents obliged. Leave it to the emotive Bartoli to make the spat seem borderline charming. “I saw them right after the match, my parents, and they understood completely,” she said. “It was not against them. I need[ed] to get that frustration out, so I show[ed] it that way. I could have broken a racquet. It would have been the same.” Bartoli is an offbeat player through and through: She plays two-handed on both sides, and her odd serve can be evocative of either a gymnast landing a gold-medal vault or a drunk wedding guest dancing the Y.M.C.A. Like all good eccentrics, she reportedly has an off-the-charts IQ, sports wild, long hair, and has a tendency to stomp around scowling. It’s easy to see where she gets it. Her father, allowed back in the stands Monday, twitched and muttered his way through his daughter’s victory over Serena Williams. Bartoli faces Sabine Lisicki’s monster serve in the next round, and could see Sharapova in the semis. If that’s the case, get ready for some serious baseline rallies.

ANDY MURRAY IS REALLY SORRY ABOUT THAT ‘BEARD’ NOW: Playing in front of a Centre Court crowd that included Britain’s royal newlyweds, Andy Murray beat Richard Gasquet 7-6(3) 6-3 6-2 to advance to the quarterfinals. Reports that America’s own royal couple would also make an appearance were half true: Jay-Z made a cameo but Beyonce never showed. Murray, who hadn’t been told that the Duke and Duchess of Cambridge would be in attendance, bowed to the royal box after his victory and later met Prince William and Kate, though he rued his appearance. “If I’d known they were coming, I would have shaved,” he said. “I was thinking to myself as I came off, ‘I was sweaty and very hairy’. I said to them, I’m sorry, I’m a bit sweaty.” Pressed further on his insecurities, he elaborated: “I’ve been told to shave by a few people the last five or six days, and I just haven’t got round to it. It’s at the length now where it actually hurts a little bit, so I always put it off a wee bit ’til I have a bit of time.” Murray and Gasquet have played against each other since they were tweens, but in recent years Murray has held the upper hand. The old footage of these matches made me sad, mostly because Gasquet no longer wears the brash backwards hat of his youth. He’s only 25, but that’s practically minivan-driving age in tennis years.

A GUY NAMED MARDY CARRIES THE HOPES OF OUR NATION: And yet Mardy Fish, ancient at the age of 29, is playing some of the best tennis of his life. After Andy Roddick’s disappointing third-round loss to Feliciano Lopez and the double-Williams defeat, Fish is the only American left in the tournament. On Monday, he served his way to a surprisingly straightforward win over Tomas Berdych, last year’s runner-up. Fish also could benefit from the bruising four-setter between defending champ Rafael Nadal and the identically-headbanded Juan Martin del Potro. Both men needed medical breaks — del Potro for what appeared to be a hip injury and Nadal for a foot problem (“Have you taken any anti-inflammatories today?” asked the trainer, to which Nadal responded: “Everything”). Given Fish’s winless career record against Rafa, the American will take whatever advantage he can get.

LLEYTON WHO?: If Magic Monday is the tennis version of NCAA basketball’s Sweet Sixteen, Bernard Tomic is its Cinderella story. The 18-year-old Aussie had to play and win three games in the “qualies” before reaching the first round of the main draw. He beat Nikolay Davydenko in the first round, came back from down two sets to win his second-round match against Igor Andreev, and then shocked Robin Soderling 6-1, 6-4, 7-5 to become the youngest player to reach the fourth round since Michael Chang in 1990. (Speaking of crazy parents.) Tomic on Monday beat Xavier Malisse in straight sets, 6-1, 7-5, 6-4, to reach the quarterfinals. He was buoyed by a loud group of colorful Australia fans who transferred their sing-song allegiance to Tomic after their erstwhile hero Lleyton Hewitt fell in five sets to Soderling in the second round. Tomic will next face Novak Djokovic, who apparently took some time off from petitioning the All England Club to allow him to bring his pet poodle inside the grounds (no, I’m serious) to beat Michael Llodra 6-3, 6-3, 6-3.