Cashing In on the New Moneyball 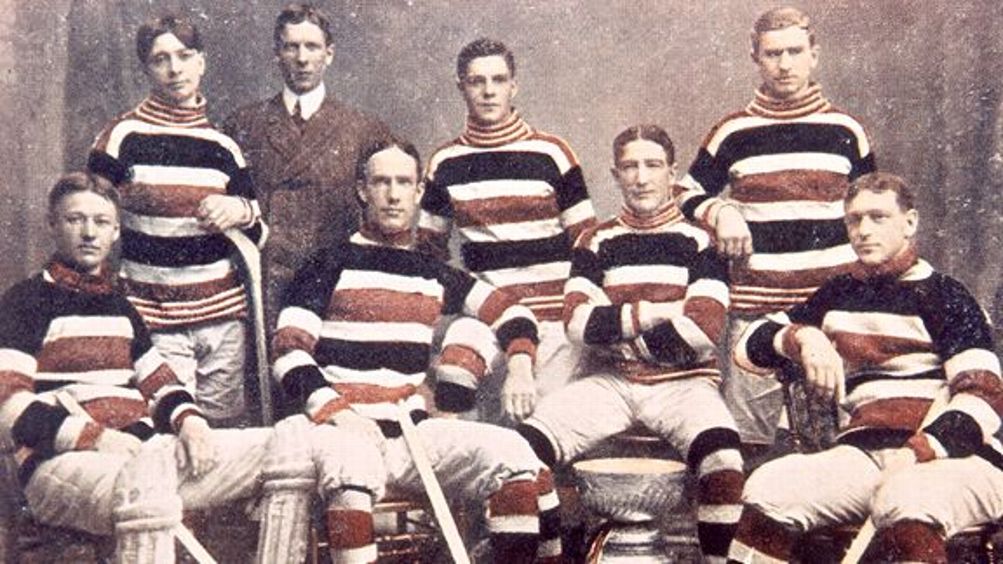 The Stanley Cup is shaped like a stout homunculus, its nine bands, two rings, collar and bowl forming the barrel chest, shoulders, and lapping chins beneath a head.

From a distance it seems immaculate. Nearer to it, its engraved names can be seen, some of the 2,163 men who have won it. On close inspection, they’re set in hazy silver plates that are whiskered with scratches. Stippled dints and notches betray the trophy’s hollowness. Older bands weep oxidation.

The names themselves are not uniform. They are wavering stanzas of mishmashed fonts and sizes, capitals and lower-cases kerned askant like old, crowded gravestones. Many are misspelled; the 1980 champions are the “Ilanders.”

The Cup is made of the thing it holds. Inside its bowl are the 20 names of the 1907 Montreal Wanderers, a long scar zagging through them. In the fluting are more names. Many are strange — Kenora Thistles, Seattle Metropolitans, Si Griffis, Gizzy Hart — but all attest that for one spring, this man and this team knew something of glory.

The Cup is always presented on a small table so that it’s level with the average man, though the trophy itself is 35.25 inches tall and 34.5 pounds heavy — about the size of a 3-year-old boy. The Cup is never cradled; it’s gripped at its base by a dominant hand and at the lip of its bowl by the other. In victory it’s hoisted and pressed overhead. Usually it’s pumped once or twice by its winner, as if he was skeptical of its weight, and then lowered to his face so that he might kiss it on a spot in its strata where if the Cup were a boy would be a bellybutton, less a kiss from the gasping player than a blown raspberry.

The Right Honorable Sir Frederick Arthur Stanley, Baron Stanley of Preston, in the County of Lancaster, in the Peerage of Great Britain, Knight Grand Cross of the Most Honorable Order of Birth, and Governor General of Canada from 1888 to 1893 was a man who, according to his official biography, “had been susceptible to bouts of depression” and remained so over the course of his life. He never played a game of ice hockey, never saw his trophy contested. It was his sons who were overcome by the game when they watched the Montreal Victorias defeat the Montreal Hockey Club, 2-1, in 1889. Immediately after that game, Arthur and Algernon Stanley put up nets and constructed boards around the ice-skating rink at the governor general’s Ottawa mansion and created their own hockey team, the Rideau Hall Rebels. The Stanleys plus other upper-class sons and officers arranged games against the few teams that existed. They skated in red flannel sweaters, white caps, and white trousers, and lost often.

Wanting an organized league to play in, the Stanley boys helped found the Ontario Hockey Association, which included the Rebels, the Ottawa Hockey Club, squads from McGill, Queen’s, and Ottawa colleges, and two teams each from Montreal and Toronto. The Ottawa Hockey Club finished atop the OHA in each of its first three seasons and was treated to banquet, at which a letter from the retiring Lord Stanley was read: “I have for some time been thinking it would be a good thing if there were a challenge cup, which could be held from year to year by the leading hockey club in Canada. There does not appear to be any outward or visible sign of the championship at present, and considering the interest that hockey matches now elicit, and the importance of having the games fairly played under generally recognized rules, I am willing to give a cup that shall be annually held by the winning club.”

One of Lord Stanley’s former secretaries was tasked with buying him a suitable trophy in London. At the George Richmond Collis & Company shop off of Piccadilly Circus, he found a foot-wide bowl, “a late Victorian electroplated silver punch bowl with a plain moulded rim above a repousse swirl-fluted and shaped band.” He bought it for $48.67 Canadian and had two plain inscription bands added, “From Stanley of Preston” and “Dominion Hockey Challenge Cup.” Under Stanley’s name was added the Stanley family crest, an eagle with its wings upraised, preying upon an infant in his cradle.

Lord Stanley attached provisos to his original Cup letter, one of which was that winners must hand over the Cup to any challengers who defeat them. Another was that “each winning team, at its own expense, may have the club name and year engraved on a silver ring fitted on the Cup.” The engraving proviso reflected how routine Lord Stanley considered his trophy’s commission. It was a contemporary gesture, an imperial figurehead providing a little British pomp and oversight to a violent colonial game. Were a new band to be added to his trophy every season, it wouldn’t be long before the thing became top-heavy and flaccid, to sway until the year it toppled. When the Cup was brought before him in 1893, a British sportswriter asked Lord Stanley to describe it. “It looks like any other trophy, I suppose,” he said.

On August 16, 1896, three men found gold at the bottom of Rabbit Creek in the Yukon Territory. They washed out $14,200 in eight days. Locals started staking claims soon after. One dug out $65.30 with every two shovelfuls of mud. Rabbit Creek was promptly renamed Bonanza; another near it Eldorado; and a third Hunter. One land surveyor estimated that the creeks held $79 million in gold.

Word of the find couldn’t spread quickly from the remote Yukon. It wasn’t until 11 months after their strike that the first prospectors docked in Seattle with more than a ton of gold. The New York Herald reported that North America went “stark, staring mad on gold.” Of the millions who dreamt of going north, 100,000 actually left for the Yukon, men mostly, between the ages of 28 and 40. They carried their ton of supplies through British Columbia until they reached the shores of Lake Bennett, where they felled trees and built dugouts to navigate the Squaw Rapids and then 800 miles of the Yukon River. Thirty thousand of them made it to the gold country, where they formed a settlement that was hopefully named Dawson City after a land surveyor.

Dawson City was built on a blade of mud cleared from the surrounding forest. It was bordered by a scarred mountain and backed against the Klondike and Yukon Rivers, 500 miles north and east of Anchorage, Alaska. Along its waterfront, the first arriving prospectors tied their boats together three deep and then built rough-hewn cabins wherever they pleased. False-front saloons came next, and then restaurants and sod-patched Edwardian hotels, tents pitched between in fungal clusters. For a time, Dawson City was the largest city north of San Francisco and west of Winnipeg.

Most in Dawson worked their single, muddy claim hard but ended up the worse for trying. They were murdered, overcome by the elements, or crushed in their shafts. They starved in their cabins, too proud to tell of their destitution. They killed themselves in great numbers. Still, men continued to trickle into Dawson because no one had found the mother lode. Their livelihood came to be known as the “Last Grand Adventure.”

Liquor, gambling, and whores were the entertainment there, but some played ice hockey in the afternoon dimday. They played for hours, bonfires lit beside the ice after the sun went down, tea kettles skirting the flames.


Putting yourself physically and emotionally at risk, that is when you grow as a player and grow as a person. … Winning a championship is a fantastic thing, but being pushed in order to fulfill your potential is really the more satisfying thing at the end of the day.
— Mike Richter (1993-94 NYR)

There were originally two ways to win the Stanley Cup: happen to play in the same league as the current Cup champions and finish above them in standings, or else issue a formal interleague challenge to the reigning team and defeat them in a separately scheduled series. Any senior Canadian amateur team could challenge, but their worthiness was determined by two Cup trustees, whom Lord Stanley appointed for life. They permitted teams from 21 different leagues to challenge for the Cup between 1893 and 1926, when the NHL became the last solvent major hockey league. Still, the trustees didn’t relinquish the Cup to the NHL until 1947, with the proviso that it continued to be “the world’s leading professional hockey league as determined by its playing calibre.”

The Montreal Amateur Athletic Association added the first silver ring under the Cup in 1893 and left room on it for future winners. It was covered with staggered names and dates by 1902. In 1903, rather than buying yet another ring, Montreal inscribed their names onto the bowl. The 1906 Montreal Wanderers found unoccupied space on the decorative fluting atop the bowl and inscribed their names there. The 1907 Kenora Thistles inscribed themselves inside the bowl. When the Wanderers reclaimed the Cup from Kenora, they became the first club to have inscribed the names of all their players and executives. This didn’t become tradition until 1924.

Beginning in 1927, every winning team added a silver band etched with the names of its entire organization. By the 1940s, the Cup was 18 thin rings tall. Players called it the “Elephant Leg.” The league recognized the need for a redesign and entrusted the Cup to a Montreal-based Danish silversmith, who rebuilt it once in 1948 and again in 1957, that one becoming the modern Cup. The modern Cup’s bowl, and the four bands, two rings, and collar beneath it, are unchanging. The winners they contain date from the birth of the Cup to the 1929 Boston Bruins. On a barrel below them are five interchangeable bands, each containing enough room for 13 teams’ worth of players and personnel. The fifth band is always incomplete; as soon as it’s filled, it becomes the fourth, and what had been the first is removed from the Cup and placed in a vault in the Hockey Hall of Fame. A modern player’s name will remain on the Cup for 64 years. The next ring retirement is scheduled to occur after the 2016-17 champions are added. There will come a day when none of Gordie Howe, Bobby Orr, nor Wayne Gretzky is on the Stanley Cup.

By the mid-’60s, the NHL was concerned that the bowl’s silver-nickel alloy was becoming fragile, the Cup liable to pulverize like elder bone. The league secretly commissioned a replica “matching every scratch, each name, absolutely perfectly.” The Danish silversmith’s replica bowl was so detailed that he included bite marks left on the original. The replica bowl (atop the 1957 redesigned bands) is what is won by modern Stanley Cup champions. It’s known as the Presentation Cup. There was yet a third Stanley Cup made in 1992, a replica of the replica that goes on display in the Hockey Hall of Fame whenever the Presentation Cup is on the road. The original bowl remains under glass in the Hall’s vault.