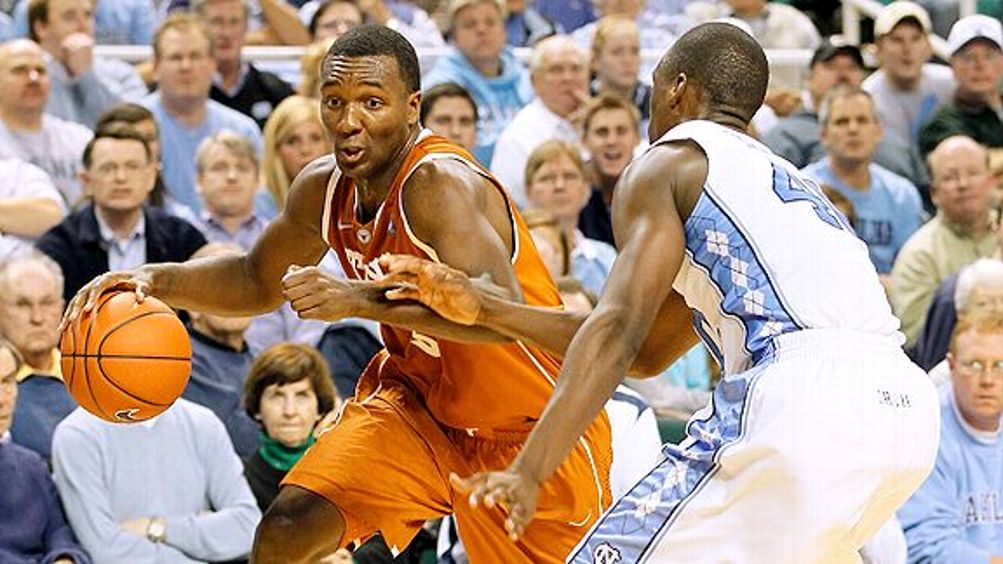 Jordan Hamilton was working through his third piece of Papa John’s when Game 6 of the NBA Finals came back from commercial. The telecast cut to one of the clips ABC has used for the past few years — the ones in which players pose with the Larry O’Brien trophy and expound on what it would mean to be its rightful owner. This time it was Jason Terry, and as the Mavericks guard held the golden basketball to his face, Hamilton was asked if this year, that trophy and these games feel any different.

“I honestly don’t really feel that I’m about to be in the NBA,” Hamilton says after he’s through chewing. “It still doesn’t feel like I’m going to be there.”

The 20-year-old spent two years at Texas before declaring for this year’s NBA draft. He hasn’t had much time to consider his place in the basketball world since. A chance to sit and watch the Finals was a welcomed reprieve from his hectic schedule — Hamilton had just finished a 12-day trip during which he worked out for seven teams. By the time he awoke in Phoenix for his final stop, he wasn’t sure which state he was in. At one point during the trip, a duffle bag arrived via FedEx to his parents’ Crenshaw home. His mother expected a few shoe samples but found nothing but dirty clothes.

“I just found out that the hotels do your laundry,” Hamilton says to laughs.

By tipoff, his parents had arrived at the Westwood apartment he shares with his older brother Gary. The apartment feels temporary, the type of place that comes with four place settings that will never be touched. The pair has lived here for almost two months, but despite sharing a bathroom, they see little of each other. Hamilton’s days are spent in gyms around the country, and Gary, a University of Miami graduate six years Hamilton’s senior, has spent the past two seasons playing basketball professionally in Japan. Hamilton is the third of five sons, a benefit that’s provided him with a challenge for years.

“I’ll never forget the first time he played with me and my college buddies,” Gary says. “He was in middle school, maybe sixth, seventh grade, and we needed an extra person to play. It was a heated game at Balboa Park, and this college freshman was guarding him. [Jordan] was scoring and getting stops, but then he started he started acting immature and talking mess. And the guy wanted to fight him. I had to step in and tell him that he was only 12. He didn’t want to beat up a 12-year-old.”

The brash kid has been replaced by a 20-year-old who’s aware of his game. After watching Dwyane Wade split a double-team and score in the way only Dwyane Wade can, Hamilton said that Wade and Kobe Bryant are the players he goes out of his way to watch. A Los Angeles native, Hamilton grew up idolizing Bryant, but when asked if Kobe’s game is the model for his own, Hamilton shakes his head.

“I’m not that explosive,” he says.

Hamilton sees himself more like Danny Granger — a matchup nightmare who thrives on his jump shot. He averaged 18.6 points last season while making 2.5 3-pointers a game. Teams like that he’s a matchup problem for smaller guards, and as he reaches for another chicken wing, it’s clear why. At 6-foot-8, he’s folded in his chair, his knees up in his chin.

Offense was never a concern. It’s the other end of the floor where Hamilton knows he needs to improve. At Texas his movements on defense often looked stiff. He’s spent the time since the tournament trying to loosen up his lower body.

“This morning, I did yoga for an hour,” Hamilton says.

When talk moved to where he’d like to end up, the desire to contribute dominated the conversation. His projections are as varied as anyone in the draft. Some have him in the top 10, while others see him as a fringe first-round prospect. For Hamilton, how high he goes isn’t as important as where he goes. Certain systems such as Golden State and Phoenix entice him, but it’s more about getting a chance than anything else.

“You look at the draft and guys’ careers, and it’s all about situation,” Hamilton says.

By the middle of the second quarter, the pizza and wings were gone, and the brothers were throwing barbs each other’s way. It’s clear that Hamilton’s sympathies lay with the Heat, even if he didn’t say it. When asked if the criticism toward LeBron James is fair, his answer came quick.

“I think he’s so good, people are going to look at all the small things,” Hamilton says. “If he wins, that’ll shut everyone up.”

Older brother wasted no time before his rebut: “Do you think it shuts them up if he keeps stinking it up in the fourth quarter?”

“Yep,” Hamilton says. “What are they going to say? He’ll be a champion.”

Robert Mays is an editor at Grantland.