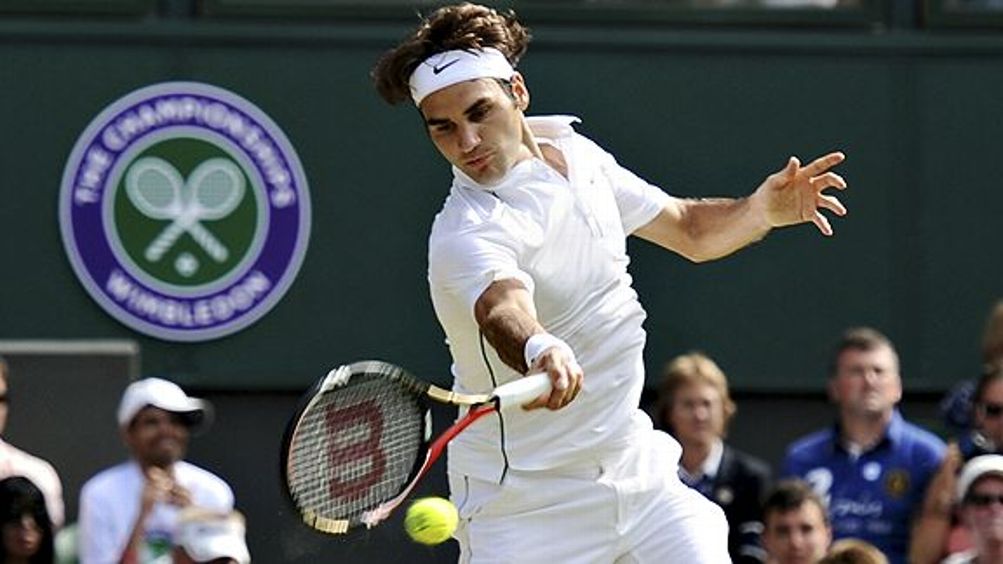 As the first week of Wimbledon draws to a close, there are still only four guys with a realistic shot at hoisting the cup:

Rafa Nadal. The obvious pick, the defending champion, and the one tennis star you wouldn’t be surprised to learn was a werewolf. Consider this: On the cursed-monsters decoder wheel, Federer is clearly a vampire: pale, aristocratic, a little dry, with a luxury-goth personal logo that looks like its mom was a bat. Nadal, by contrast, is all jaw and shoulders. He also has an uncle who travels everywhere with him looking concerned and jumpy. I’m just speculating here, but couldn’t Toni Nadal belong to a secret order of werewolf hunters who have spent the past thousand years protecting mankind from the fell power of shape-shifting beasts? I mean, just going by his facial expression? And … come on. If you’re lost in a foggy Romanian forest, and Nadal suddenly walks out of the trees, you’re not stopping to ask for directions. You’re going straight for the antique revolver that gypsy gave you last night. If I have a personal motto, it’s “never underestimate the lycanthrope factor in tennis.”

Novak Djokovic. The hottest player on the tour, and the only guy over the past three or four years who’s threatened to break into the Federer-Nadal duopoly. Given that Djokovic is by all accounts an affable dude who was best known early in his career for impersonating other players’ serves, this is a little like Monaco rising up to challenge the U.S. and the Soviet Union during the Cold War.1 But Nole just keeps getting better; this year, in the course of racing out to an early-season record of 41-0, he’s tightened up his second serve and dramatically improved his forehand. He’s still only won two majors — the Australian Open in 2008 and this year — but the real negative for him at Wimbledon is the surface: He’s never won a tournament on grass. He looked shaky and annoyed with himself on Saturday in his four-set win over an inspired Marcos Baghdatis.

Roger Federer. Having watched every minute of Federer’s Wimbledon run so far, I can say confidently that it would not surprise me in the least if Mikhail Kukushkin, Adrian Mannarino, and David Nalbandian were about to be the main characters in an Annie Proulx novel about three lonely, wounded men who move to a tiny fishing village on the frozen coast of Greenland. Federer has been so dominant in his first three matches that it’s almost hard to tell how well he’s playing. He’s eased off the gas early in every match and played a low-effort, efficient game, almost like a long-distance runner who’s built a huge lead and just wants to win as comfortably as possible. It hasn’t been thrilling to watch, but it’s been impressive. And it’s led to an ideal first week for English tabloid writers who’ve already concocted the headlines they’ll use if Federer makes the final.2

Andy Murray. Honestly, has there ever been an athlete who (a) more people agreed had a great shot to win a tournament, and (b) fewer people actually believed had any shot to win that same tournament? There’s a great joke that goes around on Twitter whenever Murray struggles that “he’s looking a little Scottish right now” — meaning that the English, who are eager to embrace his British heritage when he wins, are equally ready to desert him when he loses. Between that pressure, the endless Tim Henman comparisons, the constant second-guessing that goes with being the latest in a long line of British hopefuls who came up short,3 and the generally superhuman level his rivals are all capable of playing at, it’s just extremely hard to see Murray lifting the trophy on Sunday. Against the supremely bald Ivan Ljubicic on Friday, he turned in one of the most “British head case at Wimbledon” performances you’ll ever see, getting broken halfway through the first set, dropping the second set outright, hitting just enough amazing shots to stay ahead. He ran away with the third set and then crumbled in the fourth, losing his serve at 5-4 and needing a tiebreak to put Ljubicic away. He’s playing skittish tennis, and he’s only through the third round.

Still, you have to include him in the mix, if for no other reason than that being the British hopeful at Wimbledon is such a weird life-scenario that, really, anything could happen. He could go down in straight sets to Richard Gasquet, or the swirl of panic in his brain could throw him into a fugue state in which he plays transcendent tennis for a week. If Wimbledon were the Oscars, Murray would be the low-budget, feel-good English underdog that’s one brilliant publicity campaign from upsetting the crap out of Saving Private Ryan. Apart from Federer himself, no one is going to be more intriguing to watch in the second week of this tournament.

And that’s it. That’s the list. I’ve watched roughly 900 hours of tennis over the past few days, and I couldn’t even remember who the fifth seed was just now. (Hint: It was Robin Soderling. Robin Soderling has already lost.) Of course, there’s always the chance that some journeyman player will get possessed and knock off one of the superstars. But if you’re staking your sacred honor on a winner, it’s not going to be Gael Monfils.4 That’s just tennis this June. The gulf between the top 3½ guys5 and everyone else is so great that the first week of Wimbledon was always going to be chalk.

Which is why the first week of Wimbledon was also a great opportunity to sit back and appreciate all the stuff that makes this tournament the lovely, goofy thing it is. I was planning to write about Federer-Nalbandian today, but analyzing Federer-Nalbandian is a little like doing color commentary on Orwell’s vision of totalitarianism. (“And the boot … is stamping on the human face, Cliff! And the boot is still stamping on that human face!”) While Federer rolled, I kept zooming out and noticing the little details that give Wimbledon its Wimbledonishness. In no particular order:

1. It is called “Wimbledon.” I’m convinced that this single word inspired the entire Harry Potter series. It’s like a little magic toadstool just waiting to get plucked. It’s the “Dumbledore” of words that start with W. Seriously, if you’d never heard of Wimbledon and you had to guess whether it was a major tennis tournament or an obscure formation in Quidditch, you’re going with Quidditch every time. There’s only one other possibility, which is that Wimbledon is the name of the tobacco shop where the Sorting Hat buys cigarillos.

2. The drop-shot gasp. You get this at every tournament, but the crowds at Wimbledon are so silent during rallies that I always get goose bumps when it happens there. Deep into an exchange of groundstrokes, one guy charges the net, and just when it looks like he’s about to slam the ball back hard at his opponent, he flicks back his wrist and places a delicate little shot just over the net. And there it comes, while the opponent scrambles toward the ball: the collective gasp from the crowd at the audacity of the drop shot. If the opponent doesn’t get there, the gasp escalates seamlessly into a roar of applause. One of the most distinctive, and best, sounds in sports.

3. The bald spots along the baselines. It turns out that grass wears out when you let Juan Martin del Potro gallop on it all day. So, as the tournament wears on, the pristine jade lawns slowly harden into badlands where no life can flourish. The downside of this is that the uneven surface influences matches, because the ball bounces differently on fresh grass and blasted wasteland.6 (Who knew, right?) The upside is that when you look at the court and see brown death written all over it, you know you’re about to watch something serious. It’s like a visual cue that Wimbledon is about to get real.

5. The way the crowd tries to prolong every match. Again, this is a feature of any big tournament, but in close matches, the fans at Wimbledon are particularly good at cheering for the hope of more tennis. As Djokovic served to close out the match at the end of the fourth set on Saturday, Baghdatis managed to hit a string of sensational shots to keep himself alive. The crowd went absolutely nuts — not because they wanted Djokovic to lose, but because they didn’t want to go home. They wanted a fifth set, whatever happened. The corollary of this is that the Wimbledon crowd will love you down to your socks if you give it the right kind of effort. After Djokovic eventually won the match, Baghdatis got a colossal standing ovation and left the court looking almost like the winner.

As things stand, we’re two rounds away from a possible semifinal featuring all of the likely champions.8 For Federer and for everyone else, this tournament is about to get either really intense or really surprising. Stand by Dumbledore, eat your strawberries, and enjoy the devastation of the grass.