Right now, in the aftermath of the greatest women’s U.S. Open final in recent memory, it’s easy to forget or ignore. But not so long ago, Serena Williams and Victoria Azarenka were talked about like they were problems. They were different kinds of problems, of course, but still problems.

The problem with Serena was that she was too good. She was a lot of other things as well, of course: too muscular, too aggressive; too black, too unfeminine; too — well, you’ve heard it before. It seems almost gratuitous to recount the ways in which people objected (and still object) to her. But her greatness — that really got people worked up. Some suggested, if only by the tone of their voice, that it was unfair to the other women for her to be so much stronger, so much quicker, so much better than them. Even people who were awed and respectful of her in less demeaning ways still accused Serena of somehow “betraying” that greatness when her focus slipped or when she took time away from the game. She was damned when she played and damned when she didn’t: The field was disrupted by her presence or her absence. Either way, she was a distorting force. 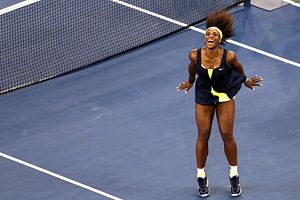 The problem with Azarenka was that she was not good enough. Since she wasn’t Serena Williams, and since Serena Williams is, right now, the best player in the world — there is no disputing this — Azarenka’s top ranking was seen as illegitimate. To be fair, she wasn’t the most problematic no. 1 that women’s tennis has had in recent years. Azarenka, at least, won the Australian Open (a tournament in which Williams lost in the fourth round, incidentally), and she began the year with a 26-match winning streak. Still, her hold on the top spot seemed tenuous. She had been merely excellent since that winning streak was broken. And she was a cold fish. She walked out onto the court hiding in a hoodie and wearing earphones. She made clumsy jokes during press conferences, got into spats with other players, and appeared reluctant to embrace a public identity. She was best known for her strange grunt, a long and obnoxious hoot. Women have been grunting for two decades, but the timing of the WTA’s announcement this summer that the tour will “drive excessive grunting” from tennis by penalizing future players suggests that Azarenka was the one who pushed the issue over the edge. After she won the Australian Open, the WTA was reportedly so concerned about Azarenka’s image that they tasked a respected reporter, Neil Harman, to teach her how to engage with the media. It didn’t seem to help much. Maria Sharapova gets points for bitchiness; Vika Azarenka had a reputation for being brash and sour. When she won, and this year won often, she stuck out her tongue and wagged a finger, a cross between and a taunt and a “no. 1.” But coming into the U.S. Open, no one thought she was the true top player, the player to beat.

I f you were watching only one half of the women’s draw, the story line through the first six rounds of the U.S. Open seemed obvious and predictable. Serena was dominating the way only Serena could dominate. She has had a nearly flawless summer. Ever since the second week of Wimbledon, she has played the kind of tennis that is rare to witness even for a few games, let alone months at a time. Even the haters had to cop to the fact that it was awesome and inspiring. To win the gold medal at the Olympics, she demolished the second-ranked player in the world, Maria Sharapova, 6-0, 6-1. “Demolished” is maybe too soft a word. Through the semifinals of the U.S. Open, she didn’t lose a set. She gave up only 19 games. She won three straight sets 6-0. She won her quarterfinal match against the former French Open champion Ana Ivanovic in just under an hour; she won her semifinal match against this year’s French Open finalist, Sara Errani, in just over an hour. Coming into the final, most people were predicting more of the same. Serena’s career record against Azarenka was 9-1. The only doubt was the doubt that always dogs Serena: She could self-destruct. Vika wasn’t going to beat her, but Serena could beat herself.

If you were watching only that half of the women’s draw, however, you were missing some fantastic tennis. Most of it featured Vika. Her quarterfinal match against Sam Stosur and semifinal against Sharapova were two of the most exciting tennis matches — men’s or women’s — I’ve seen in a long time. Both were gritty three-setters. In both, Azarenka showed a mix of powerful ground strokes, unbelievable returning, and, above all, the kind of fight that Serena is famous for. She wasn’t playing perfectly. In both matches, she had nervy lapses — badly timed double faults, stretches of loose errors — but she hit her shots when it counted. She even showed some daring, beating Stosur in the third-set tiebreaker with a pretty little drop shot. The tennis in both matches had everything women’s tennis is said to lack: high stakes, fierce competition, variation, drama. (It also featured a lot of LMFAO’s Redfoo, but I am doing my very best to forget that.)

Before the final, almost everyone was predicting that the story would be about Serena. Barring some tornado or bad line call (neither one impossible!), this would be about Serena’s dominance. Whether she won or lost, the outcome would depend entirely on her. For the first set, it seemed like it would go that way. After Serena hit a couple of gorgeous defensive lobs, I started to think she could do no wrong. Serena never faced a break point; Azarenka hit only two winners. But when Serena started the second set sluggishly, forgetting her footwork, Azarenka took advantage and broke. She is not no. 1 for nothing. And suddenly, the crowd began to turn her way. It’s hard to explain exactly why; a crowd has a mind of its own. But an underdog, even an underdog ranked no. 1 in the world, even an underdog who is howling and scowling, has appeal when she shows some fight. It’s possible that people were tired of Serena’s dominance and, already wary, were quick to abandon her. It’s also possible that they simply wanted to see a good match. After a competitive point, a brilliant shot, the urge to applaud is almost universal. Vika wasn’t simply hitting winners — but she also was never going to blast Serena off the court. Her best chance was to pressure Serena into hitting off-balance shots and making errors. She did that. You sensed that if Serena had played her best, Azarenka wouldn’t have had a chance. But a lot of the credit should go to Vika for her aggressive yet patient play. It hardly mattered that she hit few of her own — and the few that she hit were beauties. After one gutsy approach from Vika near the end, even Oracene Price, Serena’s mother, nodded her head. Azarenka earned the chance to serve for the match.

To say this was high-stakes high drama is to understate things. At some point during the third set, I lost a shoe and didn’t notice, and if I’d noticed I wouldn’t have cared. Serena was down 5-3 in the third set of the final of the U.S. Open, and she was playing a worthy opponent. You just knew something special was going to happen. And it did. It came like the sun after a storm, with the same fierce brilliance, the same kind of brightness. Serena went on a tear. You knew it was coming, but it was no less powerful when it came.

This summer, there has been a greater appreciation of Serena — after she suffered life-threatening health scares, after she watched her sister deal with an autoimmune disorder, after she lost in the first round of the French Open and responded with incredible dedication to improving her game, after she opened up to the press (not incidentally; we are a self-regarding bunch) — and of what she has given the game. But she has always been a gift.

After the match, Azarenka — who had been crushed after the match, who had hid her head under her towel — was as gracious as could be. She had fought hard. She had been beaten. She regretted nothing. “I truly admire her as a person, as a tennis player,” she said about Serena. “I feel like, it goes beyond just a tennis player when you connect with somebody … Every time I play Serena, it pushes me to be better, to improve, to move forward. To have these types of players at the top of the sport, it’s priceless.”