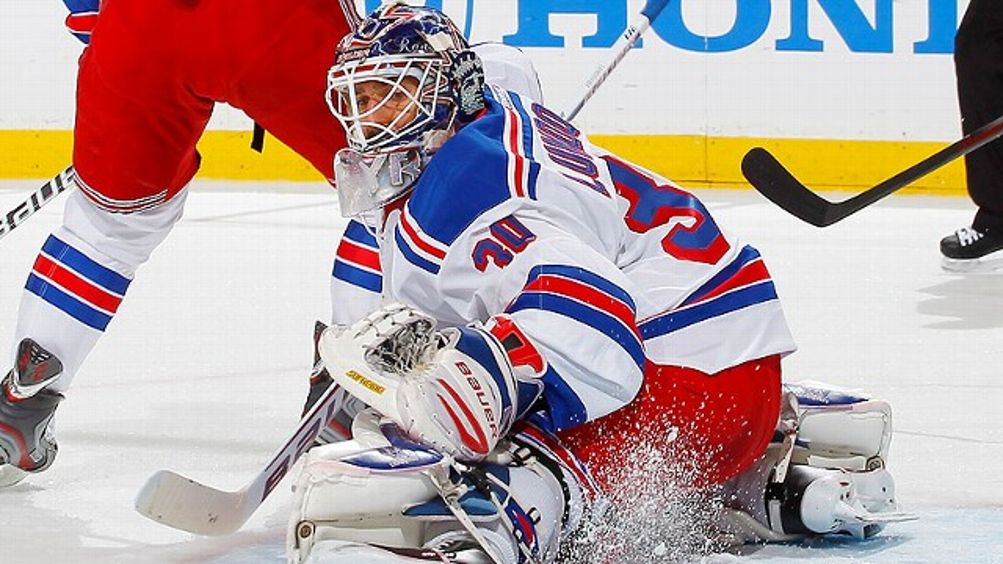 On the surface, the third game of the NHL’s Eastern Conference finals was a carbon copy of the first. Twice, the Rangers and Devils played to a scoreless tie, one that wouldn’t be broken until Dan Girardi scored a goal in the opening minutes of the third period. Both times, Chris Kreider gave New York an insurance goal to put them up 2-0. And while it was Artem Anisimov scoring third for New York on Tuesday and Ryan Callahan getting it done on Saturday, in each case it was an empty-net goal. Combined with twin shutouts from Henrik Lundqvist, the results were a pair of 3-0 Rangers wins.

The scores, lopsided as they were, belied the true nature of the games, though: The first had the feel of a 1-0 triple-OT outcome, while the third did seem like a 3-0 contest — just in favor of the Devils. A look at Behind the Net’s Fenwick timelines, which track shots for each team,1 shows how in contrast to Tuesday, New Jersey outchanced the Rangers by a near 2-to-1 margin in Game 3. But going into the first intermission, and then again heading into the second, the Devils had nothing to show for their superior play.

The reason for that, simply put, was Henrik Lundqvist., who finished with 36 saves on 36 shots. A full one-sixth of those saves came on family man Ilya Kovalchuk, with the biggest taking place not long into the second period. Set up on a stretch pass by Bryce Salvador, Kovalchuk swept through the Rangers defense, came in alone, and pulled sharply to the right. Lundqvist bit just a little too early and ended up sprawled out sideways, like a lady doing leg lifts. With one arm outstretched, he stopped the puck.

“I went down and had to make a glove save on my side,” Lundqvist said. “And that’s not really the way I want to make a save. A little lucky there that he didn’t roof it.”

It was the third playoff shutout of the season for Lundqvist, an achievement matched the next day by the Phoenix Coyotes’ Mike Smith, who also stopped all 36 shots he faced to earn his third blanking of these playoffs. The win enabled the Coyotes to avoid a sweep at the hands of the juggernaut du jour L.A. Kings and bring the series back to Arizona for at least one more game.

Sitting next to Smith on the interview podium after the game was his teammate Shane Doan. The Phoenix lifer (and captain) who scored both Coyotes goals on Sunday marveled at his netminder.

“It’s literally like having an extra defenseman out there,” Doan said. “It’s a safety blanket maybe we count on sometimes too much.  But he’s the best in the league at it. I mean, when he gets the puck, us forwards, if he misses you up ice, it’s like, Come on, Smitty, what’s going on, you didn’t see me? It’s unbelievable you would even ever have that cross your mind [about a goalie], but he’s literally that good.” (Doan may most closely resemble Keanu Reeves, but he says the word “literally” like he’s Rob Lowe playing Chris Traeger.)

While Lundqvist was, as several people joked after Saturday’s game, the “first, second, and third star,” Smith’s performance went a little more hand-in-hand with his team’s play. (He was even bailed out by the work of teammates Keith Yandle and Radim Vrbata at one point.)

Asked after the game if he thought the Coyotes might have been playing “desperate hockey,” Smith just laughed, no doubt thinking about the “Coyote ugly” style of play, as he called it in the second round, that his team has been relying on for months.

“I think we’ve played desperate since January,” he said.

“I’ve said to you guys who aren’t used to covering hockey, and watching playoffs a lot, that the most important parts of playoffs are goaltending, special teams, and how your top players play,” Sutter said following the Kings’ Sunday loss. (He was reportedly grumpy for having had to wait around for Doan and Smith to finish their press conferences, but it’s sometimes hard to differentiate between “grumpy” and “joyful” when Sutter is involved.)

Unfortunately for the Kings, Game 4 was one in which the goaltending battle was tipped toward the Coyotes, L.A.’s power play went 0-for-6,2 and none of the Kings’ top scorers were able to get the puck in the net. Other than in goal, the Kings looked less during Game 4 like the terror squad of world-beaters that has trampled through the playoffs and more like their mid-season iteration — not so great a likeness, considering the Kings’ regular-season play only barely yielded them an 11th-hour 8-seed.

The Coyotes, for their part, managed to settle down after letting the Kings goad them into some destructive physicality early in the series (something L.A. effectively did against Vancouver and St. Louis as well). “I think I might have been caught up a little bit in trying to be overly physical in the other games,” admitted Shane Doan, who missed about half of Game 2 after being thrown out for boarding. (Martin Hanzal, who also received a game misconduct that day for boarding, was suspended for all of Game 3 as well.) “I had opportunities to play with the puck, make plays, take the puck to the net in the last couple games, and didn’t do it as well.  It was brought to my attention by some people.”

Doan’s first goal of the game came off just that kind of situation — making a play, taking the puck to the net, and burying a nifty backhander that rose beneath Quick’s arm. He added a second goal that initially looked as though it had rung off a post or the crossbar, but turned out to have entered the goal before caroming back out. (NHL.com had a headline calling the sequence “The In-and-Out Goal,” which is making me crave some animal fries.)

While Smith and Doan were the Coyotes’ two best players on Sunday, equally vital was the play of Oliver Ekman-Larsson and Michael Rozsival, the two Phoenix defensemen who spent the most time matched up with the Kings’ deadly line of Anze Kopitar, Dustin Brown, and Justin Williams and held the trio to just seven shots on goal. Ekman-Larsson, the 20-year-old blueliner who has led the Coyotes in ice time throughout the playoffs and is called “Harry Potter” by his teammates thanks to a particularly realistic-looking Halloween costume, finished with the best shot differential of his team during Game 4. It was a marked improvement from the series’ first game: “I was terrible,” he said of his performance then.

Still, while Phoenix’s win granted them a stay of execution, it’s unlikely they’ll be able to pull out the miracle comeback, particularly given how much time the Kings managed to spend with the puck even in their mediocre Game 4 effort. Also ominous is Los Angeles’s impressive road record of late: The team hasn’t dropped an away game in its last nine tries. It’s surprising they didn’t fare better at Staples Center,3 though, which has been so overbooked these last few days that it might as well have been someone else’s arena.

As with so much else in Saturday’s matchup, Lundqvist’s big stop on Kovalchuk had a parallel to Game 1. In that contest, too, he had made a crucial second-period save4 on one of New Jersey’s most important producers: Zach Parise.

Parise hasn’t scored a goal since Game 3 of the Devils’ second-round series against the Flyers, and on Saturday following the game he declined to speak with reporters. This wouldn’t necessarily be that big of a deal — players find ways to dodge the press all the time, often lingering in the off-limits training room for as long as it takes — except that Parise is the team’s captain and generally one of its most accessible guys. (Also, his dad has a big mouth.) He pointed out as much when he spoke to the media after a team practice on Sunday.

“I was upset with the way the game went,” Parise said, adding that he was worried he’d say something he’d regret. “That was it. I feel like I’ve done a pretty good job [talking to the press] for almost 100 games this year. I figured if I took one night off I’d be OK.”

Devils head coach Peter DeBoer pointed out that with a bounce here or a more human performance by Lundqvist there, the entire narrative around Parise might be different. “He could easily have two or three goals in the series and we’d be praising him for how well he’s played,” he said.

The New Jersey captain was also one of the players Tortorella singled out in a Sunday rant against the Devils in which he accused the team of being artificially slow to get up after hits and complained that the elbow to the head of Anton Volchenkov thrown by Brandon Prust5 wasn’t any worse than some of the contact coming out of New Jersey. “I look at [Dainius] Zubrus’s elbow to [Anton] Stralman, I look at Parise launching himself into [Michael] Del Zotto,” Tortorella said. “Maybe if our players stay down on the ice, we’ll get something.”

Tortorella has said — and not said — a whole lot of things over the last couple of days. But while his “gamesmanship” rant (which DeBoer responded to succinctly with the lone word “comical”) made headlines, more interesting to me were the comments he made about rookie Chris Kreider, who scored for the third straight game on Saturday, bringing his postseason goal total to five — a new playoff record among rookies who haven’t yet dressed for a regular-season game.

“I don’t even know the kid,” Tortorella said. “I don’t know the kid at all. I’ve probably spoken to him three or four times since he’s been here. But he has a knack. The puck follows him around. He has a ways to go away from the puck, but he has a knack with that puck.” Kreider leads the Rangers in postseason on-ice shot differential and, somewhat alarmingly, is the only New York forward this series to have scored a non-empty-net goal. (Much of the Rangers’ scoring has been coming from its defensemen this playoff season; 11 of the team’s goals have been contributed by blueliners, more than double the offensive production of any other playoff team’s defensive unit. Dan Girardi, who scored five goals in 82 games this season, has three in the playoffs — all of them game-winners.)

On Sunday, Tortorella was again asked about Kreider. If he barely speaks to him now, how good might the kid be once he’s actually gotten around to coaching him?

“Maybe if he’s more seasoned, he’s coached, we might screw him up,” Tortorella said. “I don’t know how to look at it. Right now he’s doing some good things for us, and we’re going to leave him the hell alone.”