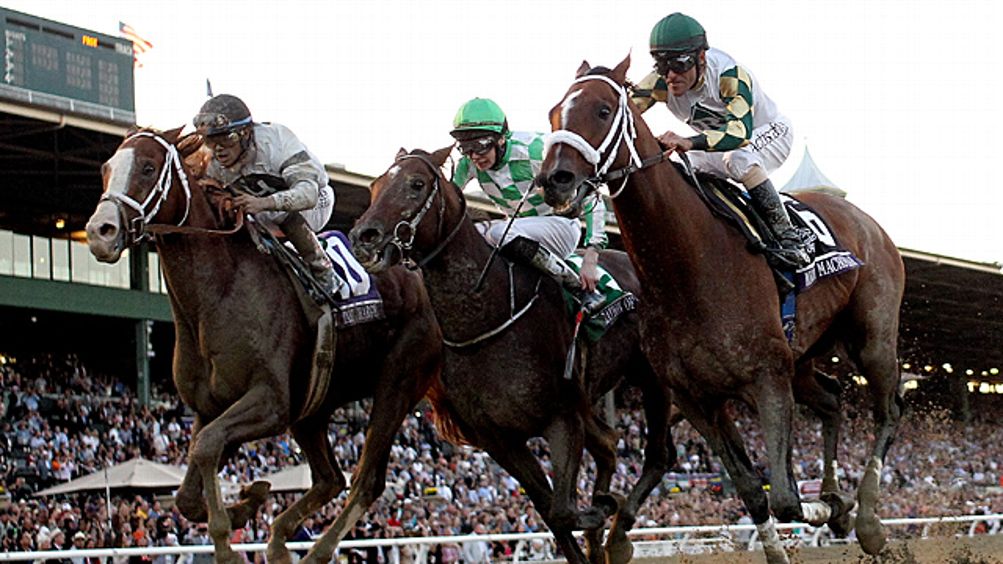 The champagne was old-school, the way everything else is at Santa Anita Park, the peak-ringed dreamscape bubble of Raymond Chandler’s Los Angeles that hosted the 30th annual Breeders’ Cup Saturday on a blue California evening that was running toward purple just at the tops of the mountains. A little more than an hour before, Gary Stevens, a 50-year-old jockey who’d watched last year’s races as part of the NBC broadcast crew, had sailed along on a glorious ride on a five-year-old named Mucho Macho Man to the first Breeders’ Cup Classic win of his career. And now, here he was, accepting the congratulations of a whole pride of swells in a hospitality area that was lit like whatever the Starship Enterprise would have for a gentlemen’s club and watching the replay on one of the big screens, a flute of champagne in his hand. The night fell like a soft curtain, and the wind smelled like blood and whiskey. You’ll be out of Tehachapi in 20 years. I’ll be waiting for you …

No, wait. A film noir seems to have broken out here. We return to our regularly scheduled sports column.

Stevens was leaning against a small round table, still wearing his silks from his winning ride, and we watched his horse duel against Will Take Charge, a willful horse with a splash of white on his brow, who came storming down the stretch on the outside. They were head for head, bob for bob, over the last 100 yards. As they crossed the line, on the screen Trevor Denman, the trackside announcer at Santa Anita who sounds like an extra in an Ealing comedy, went into orbit, exclaiming, “Will Take Charge was right there!”

“C’mon,” Stevens said, shying a hand at the screen and laughing. “I had it all the way.” He’d won in a photo.

His remarkable win concluded a remarkable weekend that concluded a remarkable year for Stevens, who had come back after a very successful career as a rider and stints as an actor, both in Seabiscuit, playing the role of George “The Iceman” Woolf, and in the HBO series Luck, which had none. (He was also named to People magazine’s 50 Most Beautiful list in 2003. For those of you keeping score at home, Stevens finished a ways up the track from Halle Berry.) “I really haven’t changed anything up from what’s been going on for the past three months,” Stevens said. “I’m having a blast right now. This is not a job. This is retirement for me, believe it or not, and it’s a pretty good retirement check every month. It’s fun. I’m going out there with that attitude. I don’t feel any pressure.”

The win in the Classic was the end of a very eventful day for Stevens, who already had ridden a winner named Pontchatrain in the undercard races prior to the beginning of the Breeders’ Cup program, which started with the BC Juvenile Fillies race. Stevens was up on a decently priced rookie named She’s a Tiger. Coming down the stretch, however, Stevens and Javier Castellano, up on long shot Ria Antonia, appeared to be reenacting the scene from Ben-Hur in which Stephen Boyd starts beating on Charlton Heston with his whip. She’s a Tiger slid a few steps to the right, breaking Ria Antonia’s momentum for two or three strides. Stevens’s horse went across the line first, but the stewards took a long look and disqualified She’s a Tiger, only the second time a winner had been taken down in a Breeders’ Cup race.

“I want to make all of my connections happy, obviously, and there was a huge disappointment earlier today,” Stevens said. “A bit of what some people thought was a controversial call … You know, I tried just not to let it get in my head. It was something that happened, and I had to move forward, unfortunately, for those connections. They didn’t have another chance today. I had six more. I’ve been waiting for this last race.”

In that same race, just before She’s a Tiger and Ria Antonia got tangled up coming down the homestretch, back up in the far turn, something in the lateral condylar bone gave way in the leg of a well-regarded filly named Secret Compass — most likely, the kind of microfracture that occurs far too often in young horses that are raced too much too soon — and the horse folded horribly forward, throwing jockey John Velazquez to the ground. Velazquez was taken to a nearby hospital, where his ruptured spleen was removed. Secret Compass was euthanized behind a green screen right there on the track. She was two years old, and that is part of the story, too, the melancholy music behind the deepening twilight. Old men triumph and young horses die, and the rising night wind carries champagne and death. 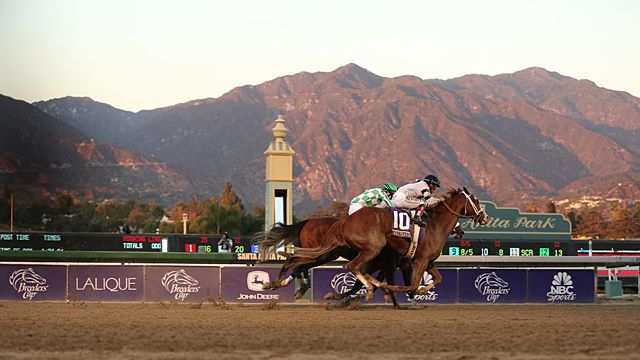 Everything in horse racing is connections. Everything comes in a kind of bloodline, even triumph, even tragedy. For the record, Secret Compass was just coming into her own. She’d won two of her previous four starts, including outdueling Gary Stevens and She’s a Tiger at the wire in the Chandelier Stakes on this track at the end of September in a finish that looks in replay eerily similar to the end of the Classic on Saturday. “Today she had to gut it out down stretch,” her trainer, Bob Baffert, had said that day, “but I always thought she’d be better going two turns.” Winning the Chandelier Stakes had qualified Secret Compass to run and die in the race in which She’s a Tiger and Gary Stevens were disqualified.

I wondered at the beginning of the day, as I walked from the parking lot up toward the baroque façade of the old racetrack, Philip Marlowe in my own mind, looking both ways for a blonde in a Packard, why horse racing hasn’t been able to weaponize and monetize nostalgia the way baseball has.

Ordinarily, you’d say Baffert had a terrific day on Saturday. Two of his young horses had won their races impressively — New Year’s Day in the Juvenile and Secret Circle in the Sprint — and people were already sizing up New Year’s Day for the horse’s potential in the Kentucky Derby come May. But Baffert clearly never got past what had happened to Secret Compass in the first big race of the day. His sorrow ran away with his sentence structure. “You know,” Baffert said, “the minute he hit the wire, I started thinking about the first Saturday in May. But, to me and my wife, Jill, it’s a very emotional win because she wasn’t here earlier. She was on her way when that filly got hurt. When you lose a horse like that, it just took all the wind out of our sails.

“These horses are so close to us, and when a tragedy happens like that, and I’m just glad that Johnny V. sounds like he is going to be OK. So, it’s just one of those things that, it’s just that I never had something like that happen on a big day. We’re all still in shock. Just the win is exciting, but you still, in the back of my mind, I’m thinking about that filly.” And then everybody started asking Baffert about the Derby, and about New Year’s Day, a young horse that was still alive.

I wondered at the beginning of the day, as I walked from the parking lot up toward the baroque façade of the old racetrack, Philip Marlowe in my own mind, looking both ways for a blonde in a Packard, why horse racing hasn’t been able to weaponize and monetize nostalgia the way baseball has. Back in the day — back when J. Edgar Hoover and Clyde Tolson used to (allegedly) whisper sweet nothings to each other in a box at Santa Anita — baseball, boxing, and horse racing were the three major sports in the country, Pete Rozelle having not yet created the universe. Only one of them truly survives today, and I think it’s because the other two have the element of mortality. Every boxer can theoretically become Sugar Ray Leonard or Duk Koo Kim. Every thoroughbred can become New Year’s Day or Secret Compass. The people who train them know that. The people who watch them know that. You send a fighter or a thoroughbred out there, in every competition, knowing that you can be sending them out to die. We are far too civilized today for the mortal stakes in our games to be that obvious. 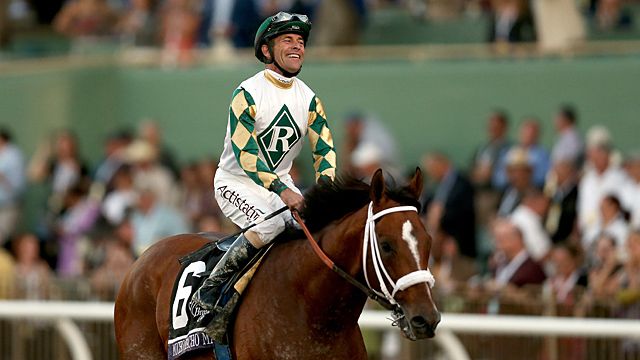 Gary Stevens rode a magnificent race in the Classic on Saturday. You could see Mucho Macho Man straining to be turned loose on the backstretch, and you could see Stevens pull him back just a bit, just enough, and you could almost feel the peace come over both jockey and horse, a flood of calm resolve at just the right time. “He was super, super sharp today,” Stevens said. “My intention in any big race is, I don’t care if you’re coming from off the pace or you’re laying up close, you need a good, clean break. And he left there like a quarter horse today and actually outbroke them … I pushed the button coming off the [last] turn. He accelerated, and it was probably a little bit early, but it gave him a little bit of a confidence builder and booster, it gave me a confidence booster. I heard them coming. I knew they were coming, but he was super, super tough the last sixteenth of a mile.”

That was the truth of it, borne out by the video that Gary Stevens watched with some well-dressed people in a tent full of rowdy congratulations and muted lighting. But it was not the entire truth of this Saturday beneath the mountains in a place that reminded you of the dark fiction that flourished under the California sun. The truth is that, on the same day, old men can triumph and young horses can die. Chandler saw the rot beneath the gilded dream. Just so, there’s a haunt in the heart of this sport that the champagne can deaden but not wash away.