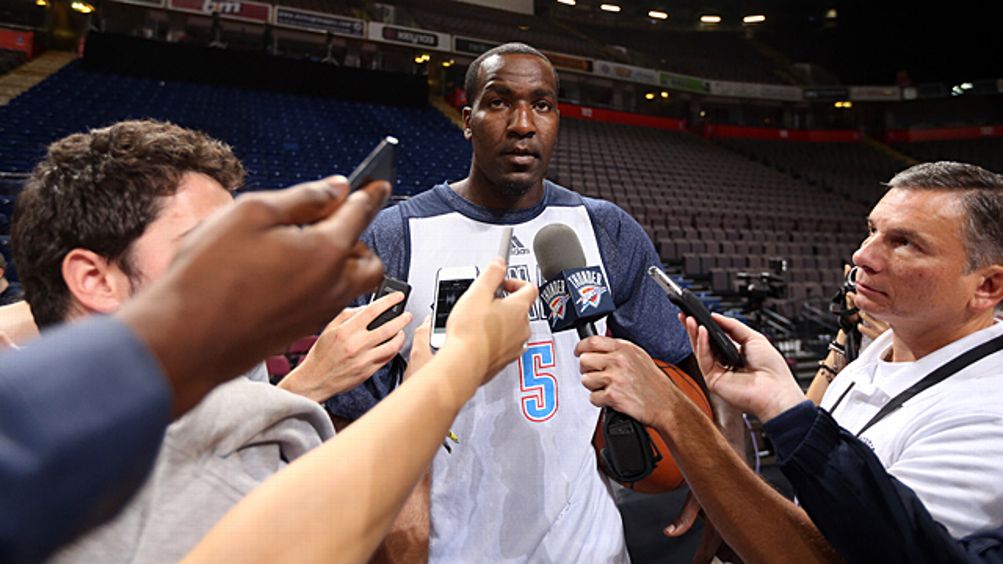 Before I introduce the concept that’s going to revolutionize Kendrick Perkins scholarship forever, let’s get the ball rolling with some light graphical analysis.

Here’s a map of Chesapeake Energy Arena in downtown Oklahoma City, home of my favorite NBA team and (probably not) yours, the Oklahoma City Thunder. 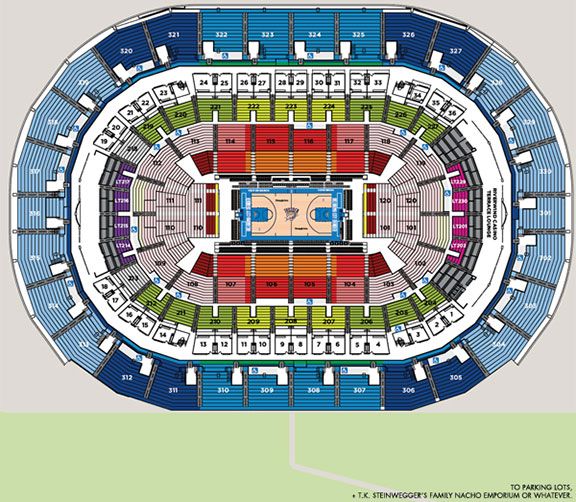 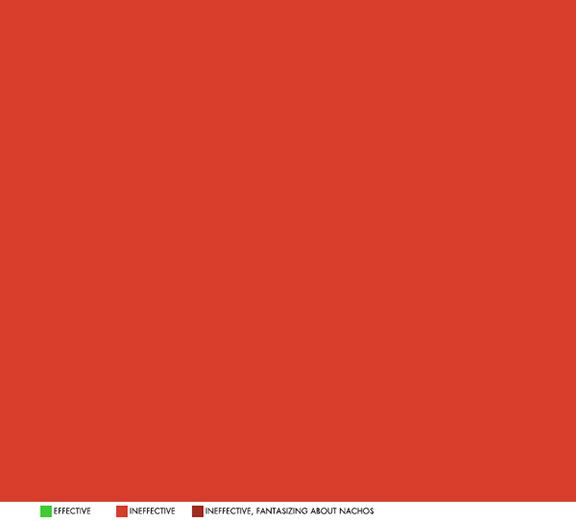 As you can see, Perkins’s game was at its best on the defensive end of the court, mostly in the low-post area, while it was at its worst absolutely everywhere, at all points throughout space and time, onward in all directions, world without end. But this map doesn’t tell the whole story. For that, we’re going to have to utilize some proprietary stats formulated over the past three seasons by a pair of experimental Thunder analysts working mostly near the couch in my therapist’s office. Ready? I call this an Emotional Heat Map. 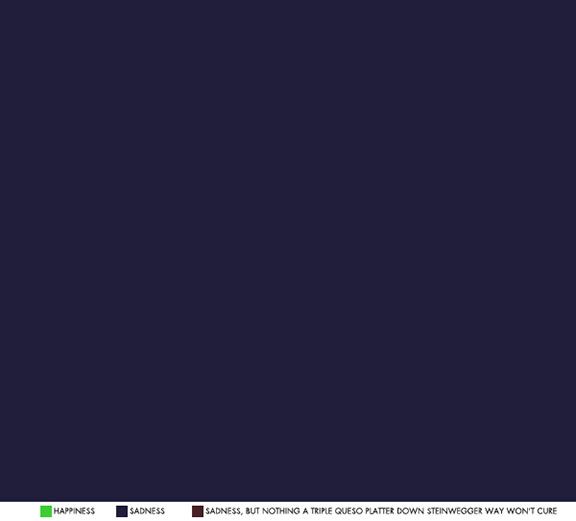 This image details the feelings Kendrick Perkins caused in onlookers during 2012-13, using nothing more than his style of playing basketball. There are a lot of nuances to consider, obviously, but here’s one detail that stands out: According to Basketball-Reference.com, Perkins led the league in both Screams of “Why, God?” Created and Uncontrollable Sobbing As a Result of Watching Someone Try to Rebound last season.

If we drill down into these numbers, we can get even more specific. Adjust the algorithm to take into account both on-court ineffectiveness and questioning the value of life itself because holy Christ no one should dribble like that and you get something like this: 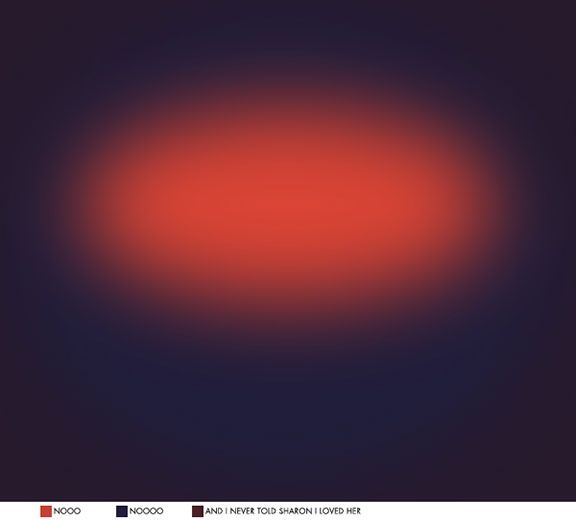 What’s interesting about this map is that it shows a clear distinction between the different facets of Perkins’s game. His ineffectiveness, shown here in red, was mostly centered on the court area, while his sadness-generating powers really took effect in the stands, the stadium concourses, and the sidewalk outside the arena — anywhere basketball fans were likely to gather while watching him play. In other words, his terrible performance, as seen, for instance, here …

… made people who like basketball feel terrible, a point illustrated by, I don’t know, let’s just grab a random screenshot: 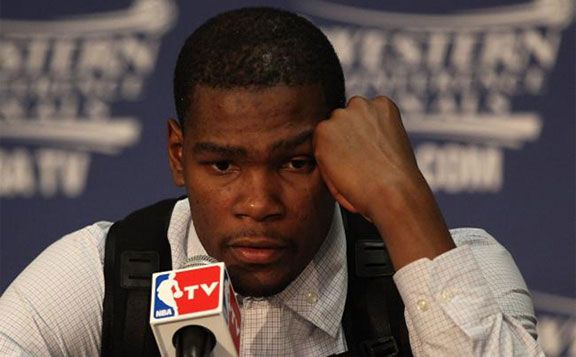 And what you’re left with, when you’ve amortized the suck-median across an 82-game schedule and adjusted for the assault charges Perkins is facing after allegedly punching a woman in the face following a fender bender outside a nightclub, which, OK, we don’t know what happened, but let’s face it, it’s just depressing as hell, and that’s before you even get to his 78 starts last year during a season when most everyone thought the franchise should amnesty him, or the mark he set during last year’s playoffs by posting the first-ever negative player efficiency rating by a player who logged more than 200 postseason minutes — what you’re left with, when you’ve run all the math, is this: 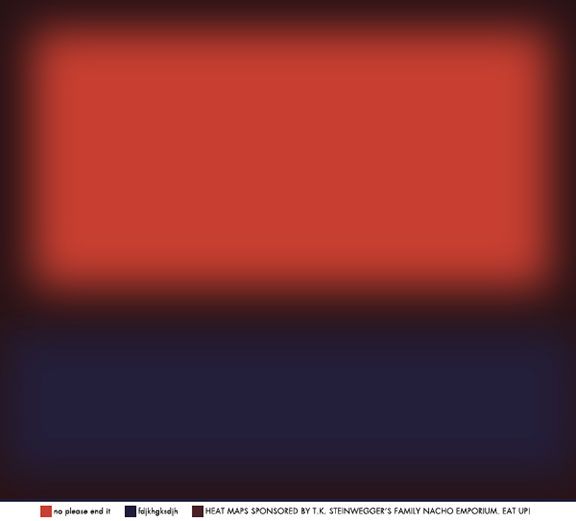 Interesting. Let’s see if we can’t crank up the resolution on that image a little: 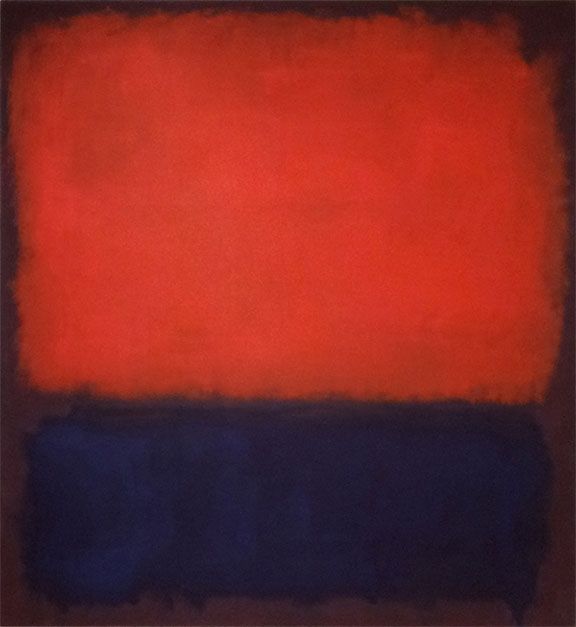 And there it is. You are now looking directly into the abyss. You are looking at the Kendrick Perkins Rothko of Despair.

It’s never easy when a player Rothkos, especially one who’s still only 28. Just a few years back, Perkins was an oddly likable, scowling … well, not star, let’s not lose our minds here, but a guy who was at least good-bad, a guy who plausibly contributed to the Celtics’ title run in 2008. He could get you eight rebounds and a couple blocks a game while shutting down centers in the low post, which is a little like saying, “That dude really knew how to kill dodos,” but whatever, it helped when it helped. He had a fun Twitter presence.1 He nicknamed himself “Yung Hawg.” He ran like a sack of bowling balls falling down a staircase. At all times, he glowered as if to communicate the urgent news that he might start crying unless he kicked a Jeep. I don’t know how you felt. I liked him as a component of the NBA. It was fun having him around.

Then, in 2010, he tore his ACL, came back after only six months, and was shipped from Boston to Oklahoma City as part of the package that sent Jeff Green to the Celtics.2 Celtics fans hated the deal. Perkins was championship-tested, a Kevin Garnett mentee who would join forces with Serge Ibaka to lay waste to NBA frontcourts. Or that was the idea. In practice, whether because the injury hampered him or because he missed the cold iron wind off the Atlantic in February3 or for some other reason, Perkins never really made sense in the Thunder’s scheme. You can think of it as a matter of aesthetics: He’s a slow, arrhythmic player, a lumbering clobberer who somehow clicked on an older Boston team that loved playing off-tempo. The regal-goofball style of Rajon Rondo suited him more than Russell Westbrook’s screeching-down-the–Death Star–trenches approach ever could. In three years in Oklahoma City, he worked better in some lineups than others, but he’d take two steps back after every step forward,4 and at his pace, he’d need 15 minutes to get through the three steps. He’d fall into stupid, avoidable controversies, at one point deleting his Twitter account after calling out — of all the guys you want to piss off — LeBron James.5 After a while, he was driving everyone crazy, including, it often seemed, himself.

All this culminated in last year’s playoffs, when Perkins managed to post arguably the worst statistical postseason run in history while simultaneously turning himself into a frazzled, frustrated sideshow act. He got broken down into component parts by Zach Randolph, feuded with Shaq on Twitter, and featured in a TNT studio clip that might as well have been the Windows recycle-bin sound spammed for two straight minutes.6 He did a set of on-court push-ups after getting T’d up in OKC’s first-round Game 6 against the Rockets — I guess it was a KG homage; it was nutty under the circumstances — and then repeated the act at the airport after the game, as if it were a thing now, as if you get to have a thing when you’re on the way to committing as many turnovers as you score points in the playoffs. Stop trying to make fetch happen, or for God’s sake just please stand up.

For all that, it wasn’t clear that Perk had fully Rothkoed until this year’s round of season previews came out. The consensus among NBA heads was that for the Thunder — still with no viable replacement for James Harden, now with no Kevin Martin and a busted-up Westbrook — to have any chance of reaching the Western Conference finals, Kevin Durant was going to have to keep playing like the laser-god he is, while Ibaka would need to throw in extra points. Hardly anyone argued that Perkins, who’s coming off his worst season in OKC, and who’s due to make about $18 million in the next two seasons, might help the Thunder by, you know, playing better. You’re in Rothko of Despair territory not just when you play badly, but when there’s no hope that you ever won’t play badly. Perkins talked a lot over the summer about improving his offense, but on the heat map of assumptions he now registers as beyond improvement. He’s not a live possibility anymore; he’s dejection plus a contract. Ibaka is someone of whom you can ask things. Perkins is just a blight. He’s a rage-colored blob hovering over a misery-colored blob on a bruise-colored background, forever.7

Is it worth taking a more optimistic view here? OK, probably not. Major personal growth and the #yunghawg hashtag may not be partners in the course of a life.8 Perkins has a sort of mean-faced, down-and-dirty obstinacy to his game that seems no-nonsense but is in fact phenomenally high-nonsense. (This is something else he shares with Garnett, the difference being that KG is worse at concealing the nonsense and much, much better at basketball.) You can picture Perkins choosing the wrong thing to work on and then working it into the ground before he’d ever think, Huh, maybe I shouldn’t gift-wrap the ammo belt Shaq will use to humiliate me on TV. In the Thunder’s season opener against the Jazz on Wednesday night, he took a 3-point shot. It … it didn’t go in, you guys. Sorry to bear bad news.

Like almost everyone, including my boss and roughly every Thunder fan I know, I think OKC is crazy not to have already amnestied him. But that said: Wouldn’t it be cool if we were all wrong? I’m writing as a Thunder fan, obviously, but I’m also writing as a fan of basketball and weirdos. What if he offset his deteriorating defense by developing one single offensive move that worked? What if he downloaded some new footwork? What if he managed to score, I don’t know, seven points a game, up from four? Maybe improved his defensive positioning enough to bring his rebounding numbers up a bit? That’s not totally unthinkable, right? I’m not talking about an All-Star-type breakthrough, just a nudge back into “I guess it … kind of works” territory. He’s 28! He makes Dracula faces! There’s no one in the NBA who’s even remotely like him! Shouldn’t we all be rooting for this?

Again, I know it’s unlikely to happen. But the beginning of a new NBA season is a time when all your dumb, bold dreams appear within reach. So screw it, I’m calling it: The Kendrick Perkins Redemption March begins right now. It’s got a mariachi feel, only with timpani. He’s going to get (slightly) better. He will find a way to (sort of) mesh with Durant. His running form will remain exactly the same, but his driveway-pics-per-tweet average will skyrocket. He’s going to contain Dwight Howard. People will say, “He looks a tiny bit better,” and mean it. Quit looking at me like I’m crazy. It’s easy to dismiss athletes when their careers dip below a certain point. Me, I’m on the side of surprises. Andre Agassi came back, didn’t he? And he had an even stiffer gait than Perk’s! Count him out; go ahead. Friend, you’re going to hear those kettledrums. I can see the future as clear as a bell that’s made out of glass so you can see through it. Why, what’s this I spy? Could it be? Is it the Kendrick Perkins Rothko of … Hope? 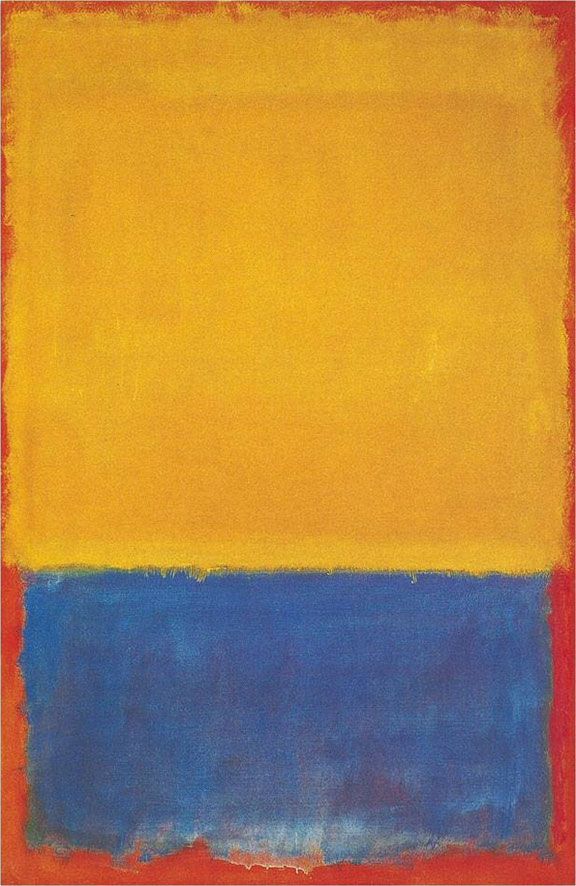