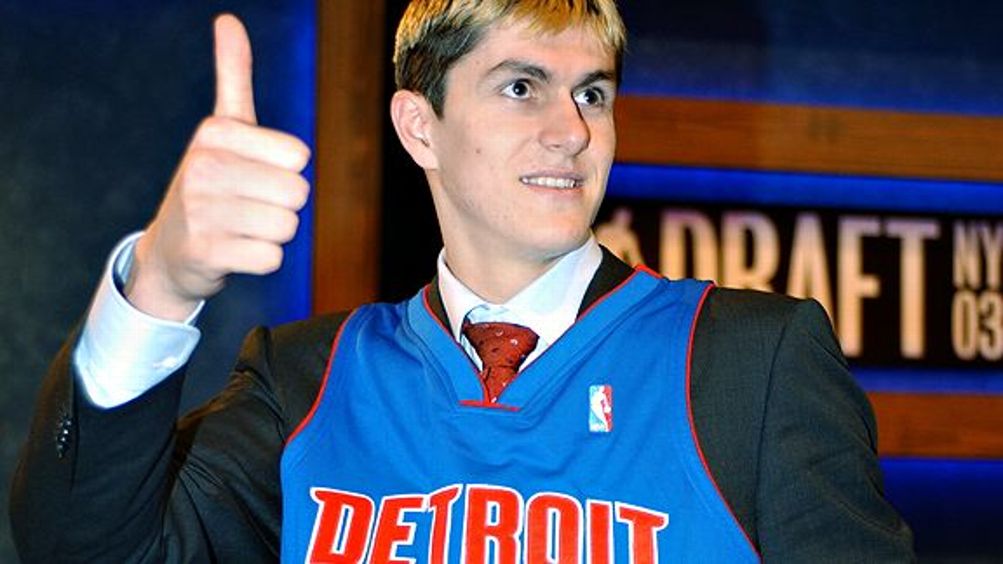 The NBA draft is one of the biggest crapshoots in professional sports. Whether you’re focusing on the art or the science, it often feels like throwing darts with a blindfold on. For every Derrick Rose there’s a Michael Olowokandi. For every Kevin Durant a Darko. And for that reason, it has always fascinated me.

When I was young I’d pore over old issues of Blue Ribbon College Basketball Yearbook — and scribble scouting reports and draft projections on handmade note cards. I’ve always been obsessed with not when teams got it right, but how often they got it wrong. So when I started writing about the NBA in 1997, I wanted draft coverage to be smarter. At the time, there weren’t many sophisticated places to find draft coverage on the web. Chris Monter was the reigning expert, and his publication, College Basketball News, was the bible. Monter would drive from event to event around the country and got to know both players’ games and who they were as people. His insights were unusually accurate.

There were still major holes in our knowledge in those days. We knew next to nothing about the international players. Ditto for small-school guys like Devean George or Derek Fisher. But my colleagues and I tried our best to put together what we had in what we humbly referred to as a “Mega Mock.” Having all the information we could gather in one spot drew a lot of attention from NBA execs, scouts, and agents. Relationships formed. The next year I decided it was time to do some scouting on my own.

In 1998 I attend my first Portsmouth Invitational. Back then a number of the top seniors in college basketball still attended the event along with representatives from virtually every NBA front office. I started meeting people, getting phone numbers, and left with an even crazier idea — instead of just aggregating all of the information from available media sources, what if we could get it directly from the horse’s mouth?

Those next two years I began harassing anyone who would take my call and putting together a consensus ranking based off of how NBA scouts were ranking prospects.
At first, I had only a handful of scouts to work with, but over the years, the sample pool grew dramatically.

In 1999, I attended my first Chicago pre-draft camp, held at the Moody Bible College in Chicago. There I began to rub shoulders with more NBA people, watch many of the top players in the draft go five-on-five against each other. Players like Jamal Crawford rose to lottery status with great play in Chicago. During breaks, we’d scamper off to other local hubs like Hoops Gym to watch prospects such as Gerald Wallace and Charlie Villanueva have disastrous, stock-crushing individual workouts in front of the entire NBA.

After Dirk Nowitzki and Peja Stojakovic started lighting up the league, I felt like we should be doing more to cover young international prospects, as well. We now had tons of information on college prospects and just a little grainy video on their international cohorts. So in 2002, I took my first trip to Europe for the Euroleague Final Four to see Manu Ginobili, Marko Jaric, and a young kid named Nikoloz Tskitishvili. That winter I traveled alongside Pistons international scout Tony Ronzone to get a look at what was to be a bumper crop of international talent headlined by Darko Milicic, Mickael Pietrus, and Anderson Varejao. At the time, most NBA teams were using a scouting service, run by Adam and Jason Filippi, to do most of their international scouting. There were just a handful of teams doing it on their own. Within a year or two, virtually every team in the league had its own international staffs.

Lots of mistakes were made in those early years. But those were the good times. For the most part, players weren’t afraid to work out. Access was virtually unlimited. Old-time NBA scouts and executives were more willing to compare notes with each other over a drink at the bar that night. It was a pretty collaborative environment. The emphasis was on making the right picks, not tricking each other.

Now, the NBA draft is a game within the game.

Agents have too much control, holding out even marginal players from workouts. The Portsmouth Invitational barely has any second-round prospects, let alone first-round prospects. The Chicago pre-draft camp is now a combine. Players no longer play five-on-five. Instead they run through drills. In the past few years, the elite players in the draft have stopped doing even the drills. Every year the grumbling, from both NBA teams and the media, increases as access to players dwindles. If the pattern continues, the camps and scouting events will go away all together.

In response to the decrease in access, team scouting staffs have quadrupled. Budgets have grown exponentially. Front offices have turned to more quantitative methods of evaluating players. Spreadsheets and sophisticated statistical formulas play a much bigger role. Synergy’s online video scouting service has revolutionized film sessions giving us the ability to watch video of every second that a prospect has played. NBA teams regularly hire team psychologists and private detectives to go deeper into prospects’ backgrounds.

The process is now both bigger and more impersonal. The more money teams spend, the more they believe they have a competitive advantage by hiding information from others. In 2001 I could get five GMs in a room to talk in detail about prospects (Jerry Krause excluded). Now … good luck. And the result? Despite all the innovations, teams are getting worse, not better, at making draft picks.

This decade, just 21 percent of all lottery picks have turned into All-Stars, while a whopping 42 percent are draft busts.

You can blame some of that on the influx of high school, one-and-done, and international players in the draft. With players entering the draft earlier, teams have less game film to digest and have to project more. But even when factoring in those variables, it doesn’t totally explain the relatively poor performance by teams.

Despite all the innovations, teams are getting worse, not better, at making draft picks.

In the ’90s a typical draft produced 5.6 sleepers in the late-first or second round. These sleepers weren’t necessarily All-Stars, but all were key NBA starters or rotation players. All were better than the draft busts in the lottery in a given year, which essentially means teams in the lottery missed on them. This decade? That number jumped to 8.3 sleepers per draft. What it means is that in the past 10 years, despite all of the advancements made in scouting, teams were more prone to miss (both ways) in the lottery than they were in the ’90s.

The NBA draft is both an art and a science. Over the years, the balance between the two has gotten out of whack. We have seen a toxic combination of information overload and a dearth of access. This clouds both what the eyes see and what human intuition about a player tells us. If draft prospects were robots or numbers on a spreadsheet, the plethora of information and lack of human contact would be a good thing. But these players are people with habits, friends, families, lives. The less contact you have, the harder it is to factor all of that in.

Despite all the money that’s spent, the ability to predict the success of a NBA draft prospect has not gotten better. Until the league finds a way to work with player agents to recreate a more intimate process, it’s likely to remain a crapshoot for a long, long time.

Chad Ford covers the NBA for ESPN Insider. This is his first piece for Grantland.