Fifteen Years of the NBA Draft 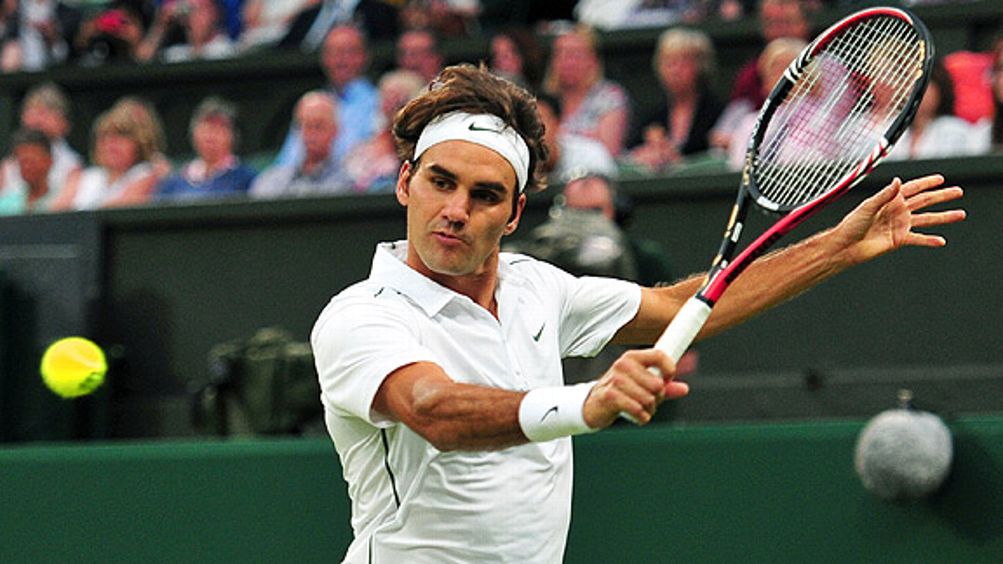 Here’s one way to think about tennis: It’s a tragedy that’s trying to be a comedy. No sport leaves its players more isolated or subjects them to a more unforgiving test. You’re alone on the court,1 your flaws completely exposed, and all you have to draw on is your own core of ability and will. Nearly every match is an elimination match. No sport comes closer to the idea that you win or lose with whatever’s in your head.

At the same time, a tennis player is a dude or gal in a spiffy little outfit, who, if all works out well, receives polite applause by the Duchess of Cornwall. If he or she should hit the ball into the net, a small child in an oversized-logo Ralph Lauren shirt sprints down a bouncy ball. The game takes place within an atmosphere of dandy pomp2 that’s weirdly out of sync with its loneliness and desolate truths. This makes it funny despite itself. If tennis were a novel, it would be called Chauncey Bagge-Tompkinson, Warrior of Despair.

The chasm between tennis’ inner grind and outer frippiness was depressingly — but hilariously! — on display during Roger Federer’s 6-2, 6-3, 6-2 win over Adrian Mannarino yesterday. Mannarino, a 22-year-old lefty whose ATP ranking would have been a good scoring night for Michael Jordan,3 was not so much overmatched by Federer as just quietly abolished by him. Mannarino was so powerless in this match that Federer broke him on the first try in all three sets.4 And when that happened, the young Frenchman more or less visibly crumpled into himself, winced, psychically yielded, and carried himself with the ginger vagueness of a Greek hero who’s just discovered that he murdered his father and married an Atlantic walrus.

This was both sad and really funny because Mannarino’s dark night of the self took place in the presence of Camilla Parker-Bowles, who is to nervous breakdowns what a Pottery Barn catalog is to trench warfare,5 and also beneath Mannarino’s own crisp-white postmodern-country-club-parody Wimbledon uniform, and while hauntingly earnest children raced across the net in tandem to retrieve every one of his comically mishit forehands. After the first couple of games, Federer took his own level down to a sort of comfortable mellow-jazz cruise mode, and played out the last two sets at a smooth, serene pace.

And that was the problem, actually, at least for Federer fans. Because in those first few games, it was clear that Federer had it. He was hitting shots from everywhere, crushing the angles, and generally ripping fierce spin. It was looking like one of those performances you hope for every time you turn on a Federer match — you know, the ones in which he floats at net, flicks impossible over-the-shoulder backhands, hits winners straight down the line while running backwards, finds the corners with shots struck between his legs, and makes you laugh at moves so perfect they barely makes sense. Instead, Mannarino gave up, Federer eased off, and the last two sets felt more like a formality than anything.

What do you do when you see a great shot in tennis? There should be a taxonomy of sports based on the involuntary physical reactions you have when you watch their peak moments. Football — like golf, weirdly — makes you pump your fist and shout, or throw your arms over your head and wail. Basketball makes your eyes boggle and your mouth gape.6 A great shot in tennis, like a great goal in soccer, makes you laugh in disbelief. I have no idea why this is, but for all the game’s tragic overtones, Federer at his best, the Federer who came out fleetingly at the start of the match yesterday, turns you into a little kid laughing at a ball.

Which might have something to do with the sadness that seems to hover around Federer these days. He’s still one of the best tennis players in the world, but that delight is a just little less reliable than it used to be — whether because he’s lost a quarter-step, or because the expectations are so ridiculously high, or both — and when that feeling flickers and then disappears, it leaves you a little hollow. There was a moment in the match yesterday when Federer narrowly missed a basically impossible shot,7 a twisted backhand parry at head height, and the announcers on my feed sort of ignored the miss and started fantasizing about how the world would have reacted if he’d made it. They were chuckling like kids. When you stop laughing it’s tragic again.