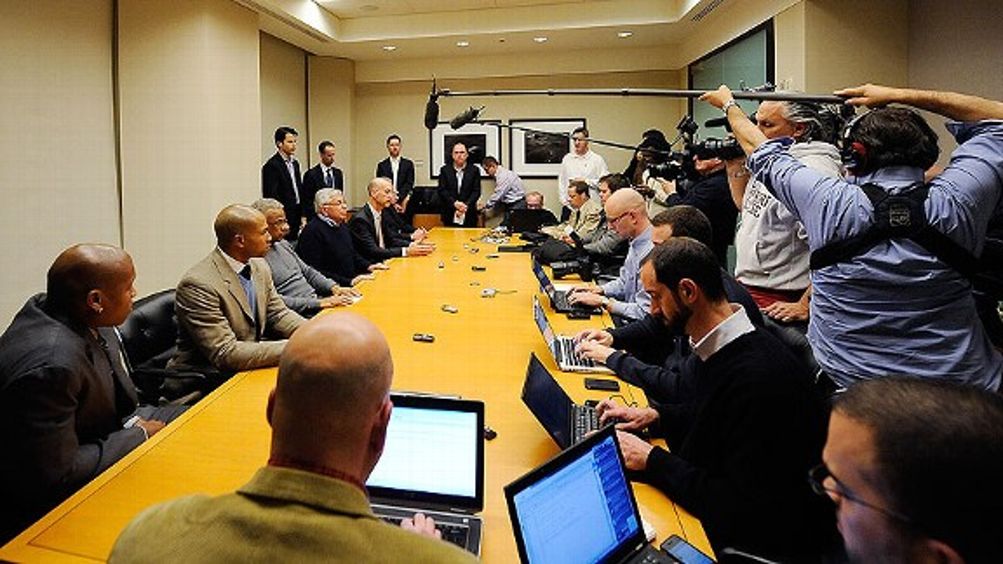 To the delight of fans everywhere, the NBA and NBPA reached an agreement on a general framework for a new collective bargaining agreement. And while the agreement still needs to be ratified and several minor issues need to be addressed, the rumors and direct information released thus far can paint a picture of what the NBA will look like in the future. Several major issues were addressed that could reshape player movement going forward.

The percent of BRI that the players received in the previous CBA was 57 percent. The players and owners reached a compromise on a floating BRI percentage number that can be anywhere from 49 percent to 51 percent, depending on revenue. How much less money would the players have earned last year had this system been in place? It’s impossible to pin down the exact BRI percentage number that would have been used, because we don’t know how that number will be calculated based on revenue. But we can use sample BRI percentages within that range to get a better understanding of the amount of money the players conceded (dollars are in billions).1

So the players would have received anywhere from $229 million to $305 million less than they were actually paid. While this issue was hugely important to players and owners since it determined the actual amount of revenue each would receive, ironically, BRI distribution has very little tangible effect on player movement.2 Instead, the system issues are what could change the way the NBA functions.

Before delving into the details of the new system, it is important to highlight the distinction between being over the cap and being a tax-paying team. In both cases, the only means of acquiring new players are via trades, the draft, or by using various cap exceptions (which we will detail later). However, an important change from the last CBA to this one is that some additional restrictions were placed on the tax-paying teams that do not apply to teams over the cap but under the tax threshold. There is actually a gap between the salary cap and the tax threshold. Over the previous three years, here are the tax and cap levels (dollars are in millions):

Last year, the only tax-paying teams were the Magic, Lakers, Mavericks, Celtics, Jazz, Blazers, and Rockets. There were several teams over the cap that were not at or above the tax threshold. The new “tax payer team restrictions” that will be discussed later do not apply to those teams. Apparently, the cap will be $58 million for the 2011-12 and 2012-13 seasons.

A major change to the new CBA is the structure of the luxury tax. In previous years, a team exceeding the luxury tax threshold would simply pay one dollar for every dollar over that limit. So, when acquiring a new player, the monetary cost was simple to calculate. If a tax-paying team wanted to acquire a player, it would essentially cost it double the player’s salary, with the salary going to the player and the corresponding amount paid in tax.

This is all about to change with a progressive and debilitating tax that should deter some spending. It’s important to note that, technically, if a team wants to just spend freely and takes a “finances be damned” approach, that avenue is still open. What the changes have done is make it significantly more expensive to have that approach. These changes don’t kick in until the third year of the CBA (the 2013-14 season), which gives teams ample time to get their houses in order. The new tax structure is as follows:

After the $20 million mark, every additional dollar spent adds 50 cents to the previous tax level.3 The language in the memo sent out reads that these taxes are paid “incrementally,” which means that a team would pay $1.50 for every dollar in the $0 to $5 million range, then $1.75 for every dollar in the $5 million to $10 million range, etc. In addition, repeat tax payers, defined as paying the tax in four out of five years, are given an additional tax of one dollar added to each level. The Lakers, Mavericks, and Celtics would have qualified for this status last year. I will use the Mavericks as an example here, since they made an interesting late-season free-agent signing of Corey Brewer that would have been impacted by this tax structure. The chart details what the Mavericks paid in taxes, what they would have paid as a repeat offender if the new CBA had been in play, and how much the Corey Brewer signing would have cost them in actual tax dollars last year (dollars are in millions):

As repeat tax payers, the Mavericks would have been subject to the higher tax rate and would have paid out an additional $41.425 million in taxes. The late-season acquisition of Corey Brewer would have cost an additional $9.1 million in taxes from what it actually cost the Mavericks last year. While teams are still free to spend as they wish (within the parameters of the soft cap), the penalty for doing so has been increased significantly and should serve as a deterrent.

The big winner in leaving the Bird Exception intact is Dallas. There were proposals that restricted or eliminated this Exception for tax-paying teams. If that had happened, the Mavericks would have been unable to re-sign center Tyson Chandler. Now they can. And because the punitive tax structure does not kick in until Year 3, the Mavericks can make Chandler a strong offer. They have only $41.1 million in committed salaries for that year.

Starting in Year 3 of the new CBA, sign-and-trades6 will be prohibited for any team that is more than $4 million over the luxury tax. For all the back and forth over this particular restriction, it is actually rare for a team over the tax to participate in a sign-and-trade. This was done only a handful of times in the previous CBA, and the only one to directly impact the championship was the Mavericks’ acquisition of Shawn Marion.

The more interesting change here is that new provisions allow for an S&T to have annual salary raises of 4.5 percent. This is lower than the max Bird Exception raises of 7.5 percent. The maximum contract length is also limited to four years, one fewer than the Bird Exception contract. So if this had been in place in the summer of 2010, what would LeBron James’ sign-and-trade contract have looked like versus what it actually is, and how much money would he have lost by leaving Cleveland (dollars in millions)?7

Last year, LeBron had the ability to sign a full Bird Exception contract and then be traded to Miami (he took less money, but he didn’t have to). In the new CBA he wouldn’t have had that option, and instead would have had to sacrifice significant money. This should allow teams to better retain their existing players.

An extend-and-trade is similar to a sign-and-trade, with the difference being that rather than wait until a player hits the free-agent market, a team will offer a contract extension and then trade a player immediately after that contract is signed. The maximum length on these extensions is three years.

While the dollar values (similar to a sign-and-trade) have been lowered, this type of deal opens the door for Carmelo Anthony-like maneuvers, in which he forced his way out of Denver. Sure enough, as the details of the new CBA emerged, rampant speculation about the futures of Chris Paul and Dwight Howard started, with the possibility of an extend-and-trade making these moves more likely.

There are three other exceptions that are worth noting:

So, now a player will have to make a significant sacrifice to sign with a tax-paying team.

The minimum team payroll used to be 75 percent of the cap. That has now been increased to 85 percent. With a $58 million cap, the minimum salary this year will be $49.3 million, up from last year’s level of $43.5 million, with the same cap. This percentage increases to 90 percent in Year 3, which would put the minimum salary at $52.2 million (at this cap number). This increase ensures that the cuts by big-spending teams to comply with the harsher tax code are somewhat offset by spending on the other end of the spectrum, which should allow for more balanced rosters. The phasing in of this minimum team payroll should prevent teams from being forced to sign bad contracts just to get over the minimum team payroll.

In the previous CBA, trades had to abide by the 125 percent rule, meaning that in a trade involving a team over the cap, that team can take back salaries equivalent to up to 125 percent plus $100,000 of their outgoing trade salaries. That rule is still in place for teams paying the tax, but for non-tax paying teams the percentage increases from 125 percent to 140 percent. The practical effect of this change should be to allow for less “filler” players in a trade, and also allow teams looking to create cap space to more effectively dump salaries. It also gives non-tax paying teams an advantage in the market, since they have more flexibility to complete a trade.

Amnesty was employed once in the NBA, in 2005. But in 2005, the amnesty only wiped a contract off the books for tax purposes. The player still counted against the team’s cap space.

This year’s amnesty provision is much different in terms of how it is calculated and what happens to a player when he is released through this process.

Grantland already broke down potential amnesty candidates. The new punitive tax might cause some teams to release players they otherwise wouldn’t have (looking ahead to Year 3), but the real impact is the waiver process. That process will hurt several contenders that were hoping to add cheap talent.

For example, it is widely believed that Baron Davis, owed more than $28 million over the next two years, will be released via the amnesty provision.8 This will create significant cap room for Cleveland (dropping its committed salaries for the upcoming season to $41.5 million from $55.5 million). The Cavaliers will still have to pay Davis’ salary.

If Davis simply hit the open market, it is widely believed he would take a minimum contract from either the Heat or the Lakers. Why not? Cleveland is still paying his salary. But with the waiver process, Davis won’t get to choose his destination. Instead, any team under the cap (which is the majority of the NBA, anyone under $58 million here), can claim him by submitting a bid at a salary they specify. A talented player with a toxic contract like Davis is much less likely to end up on a contender. The amnesty provision may be used only one time by each team.

What Does It All Mean?

We can guess what will happen once the new CBA is in action, but we won’t really know until we see the machinations at work. What the new CBA definitely does is put real financial pain on players leaving their current team (something that wasn’t really present in the previous CBA with the ability to work a sign-and-trade at maximum value), and hurt chronic tax-paying teams. The questions that will be answered going forward are how much money will a player sacrifice to join the team of his choosing, and how much tax will a team be willing to pay to put the most competitive team possible on the court? Those breaking points will determine just how the NBA operates in the future. In the interim, at least we have our game back.

Vishnu Parasuraman is a consultant in the Washington, D.C., Metro Area and an editor of the All About The U blog. He is a graduate of the University of Miami with an MBA from Carnegie Mellon University. Follow him on Twitter: @vrp2003.

Previously from Vishnu Parasuraman:
The NBA Lockout: Why the Players Will Cave