If I Ruled the (NBA) World 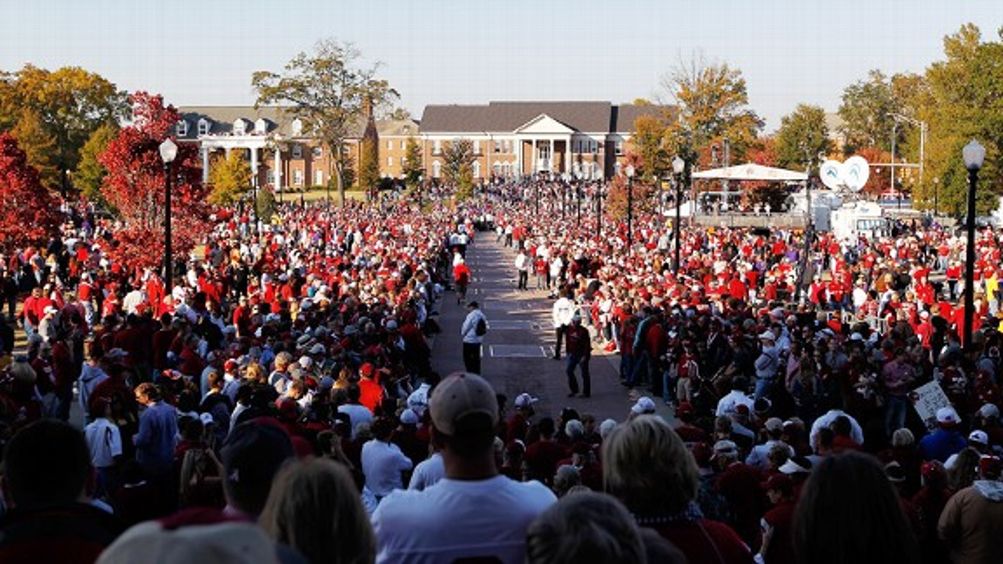 By 11 a.m., a haze of smoke hung over the campus quad in Tuscaloosa. About 1,200 tents filled the 20-acre stretch of land, which is split on its north end by the library and navigable by a series of concrete paths. A group of university facilities workers, each with a full bag of trash in hand, worked to fill another. This was twice the amount of tents they had ever seen, and still, this was just the beginning. In a few hours, they said, the paths would be at a standstill.

Cell phone service was gone by noon. The word was that 250,000 people had come into town, and the towers were overloaded. Bryant-Denny Stadium holds about 102,000, but tickets were around for those willing to spend. On University Blvd., a “City of Tuscaloosa Licensed Ticket Reseller” had a set of four in the upper deck. A father and son stopped to ask. “For all of ’em, twenty-four forty-four,” he said. The father smiled and moved on.

The smell of burning oak and mesquite filled the air since the early morning, but by 1 p.m., it felt thick enough to chew on. At Jay Stuck’s tents near the library, two grills and a deep fryer cooked lobster tails, beef tenderloin, sausages, a “bacon explosion” (three pounds of bacon, a pound of sausage, and cheese smoked for five hours), and alligator, which was breaded and tasted like something between chicken and perch. Stuck is a Tuscaloosa lawyer and Alabama grad. He is one of a 25-person committee that runs this set of tents. Today is an event, complete with a bartender serving up shots of Grapico grape soda and Skyy vodka dyed yellow — a “purple drank” joke at the expense of codeine-syrup enthusiast and former LSU quarterback JaMarcus Russell.

The running gag among Alabama fans, and one perpetuated by the agitation it causes, is that both Baton Rouge and its residents smell like corn dogs. Stuck, in turn, made sure miniature ones were available. These sorts of jabs are mostly good-natured, obligatory considering the circumstances of tonight. This isn’t Auburn, or worse, Tennessee. “We hate Auburn because we have to,” Stuck said. “We hate Tennessee because we want to.”

The facilities workers were right on. Around 2 p.m., the traffic along the paths near the middle of the quad stopped. Stuck in the jam was a girl in a houndstooth skirt with a bright-red dog in tow. The dye job was the work of red Kool-Aid, a method Alabama senior Mary Lee Holmes said her 2-year-old St. Bernard-Lab mix, Stan, didn’t seem to mind. Stan’s outfit was completed by a shirt embroidered with a popular Cajun-bashing slogan of the day: “Tigers Bleaux.” The bottlenecks brought opposing fans into close quarters for much of the afternoon, but southern politeness often won out — chants of “Go Tigers” answered by “Roll Tide.”

It became clear at some point that “Roll Tide” works for every type of pleasantry: “hello,” “good-bye,” “thank you.” When a man in neutral colors tried paying for a beer, it was “Aw. You’re not from around here, huh?” Today, wearing green is worse than wearing purple. There are no atheists on Saturday in T-Town.

The sheer amount of crimson is to be expected, as are the Bama bangs and men in ties. It’s the houndstooth that surprises. They’ve managed to slap it on everything — scarves, chairs, headbands, pants, skirts, dresses. When an 8-year-old boy in a houndstooth baseball cap is asked why he is wearing a pattern that lost its relevance 30 years ago, he looks at the ground embarrassed, more for the ignorant stranger than himself. “It’s because of Bear Bryant.” Bear Bryant died in 1983. In Alabama, girls are born with houndstooth bows in their hair.

Just after finishing his answer, the boy was dragged away by his friends. Kickoff wasn’t for another couple of hours, but a movement had already started toward the stadium. From University Blvd., Bryant-Denny Stadium looks like the home to a 13-time national champion. The Big House at Michigan is bigger, but the seats are cut into the ground. Here, the walls tower over the crowd as they move down the slope of Stadium Dr. Fans are already standing five deep on the hilled lawn of the Phi Delta Gamma house to get a clean look at what’s about to happen. Before the game, the Alabama bus pulls up in plain sight and fans form a tunnel for the players right alongside the statues of Wallace Wade, Bryant, Stallings, and Saban. There were thousands, and the sound when the bus doors opened and the first chords of “Thunderstruck” began was deafening.

In the hours leading to kickoff, the din never died down. With 30 minutes left on the clock, the building was already shaking. Bear Bryant’s voice and an epic score played behind a video of Alabama football’s greatest moments, and the reaction to each was as if they were happening in real time. As Nick Saban and his team gathered in the north end zone before taking the field, conversations had been reduced to futile shouts. The Alabama crowd had spent the last hour in a frenzy. The Game of the Century was theirs. And when “Thunderstruck” began and the pom-poms moved in unison, and the Tide ran through the tunnel, it was hard to tell if the chills were from the night air of November in Alabama.

When the game began, the pace heightened the reaction to every hard-earned yard. By the second quarter, it already seemed as if the first team to double digits might win the game — every broken tackle on a Trent Richardson 39-yard catch and run drew a rise out of the crowd. From the top of the lower bowl, the sheer speed of each defense showed through, and openings that looked certain to provide big gains closed quicker than seemed possible on a college field.

The loudest eruption came just after the fourth quarter began, with the game still tied 6-6. With first-and-10 on the LSU 28, Alabama lined up in the Wildcat with Marquis Maze behind center. Rather than take off, the wide receiver lofted a ball toward the end zone that looked to be caught at the 1-yard line. But as the players separated, it was LSU that held the ball. Boos rained down after a review upheld the play, and even with more than 11 minutes remaining, it felt like overtime was inevitable. When AJ McCarron was sacked on third down during Alabama’s first possession in overtime, the Tide were forced into a 52-yard field goal and the sense in the stadium fell to desperation. Cade Foster missed badly to the left, the fourth miss of Alabama’s day, and when LSU took possession, it needed just two plays to move inside the 10.

The sound came just as the kick left the ground — a collective inhale from 100,000 wearing crimson. As the ball came into view over the linemen, the sea of pom-pom shakers fell all at once. The only noise in the stadium came from the pocket of purple and yellow in the upper deck of the north end zone, but their cheers were swallowed in the wind.

At around midnight, most of the tents on the quad sat empty. Several had tables and chairs piled into the middle, looking ready to be used as kindling. Half-full trays of ribs and sausages and empty bottles of Maker’s Mark lined houndstooth tablecloths. The folks who’d packed up sat waiting for rides on the curb on Colonial St., their coolers and lawn chairs stacked. Those who remained huddled around portable heaters, houndstooth-patterned blankets pulled up to their eyes. No one said much. An elderly couple sat silent, facing each other over a small heater, neither seeming to be in much of a hurry to leave. Two tents over, a boy of about 12 watched the highlights as his father took down the tent around him. “Brian, it’s time to go,” the man said, with one side of the white tarp already slumped to the ground. “Brian, right now.”

Music came from a tent filled with purple and gold. The song changed every minute or so, as no one could wait to hear what they would dance to next — “Walking in Memphis” to “Chicken Fried” to “Tiny Dancer.”

A man in a Bear Bryant fedora carried an armful of tent poles toward the curb. “That’s what I miss about Mike Shula,” he said. “At least I got used to losing. At least I could stand it.” His friend managed a laugh. In the LSU tent, the first chords of “Sweet Home Alabama” started in. It wasn’t but a few seconds before the song changed again.

Previously from Robert Mays:
Does Missouri fit in the SEC?
Who Owns the Texas Rangers?
Making the Case for Matt Forte, MVP
The Second Act of Kansas State’s Bill Snyder
Sweet, Home: A Chicagoan Stands Up For Walter Payton
An Oral History of Friday Night Lights